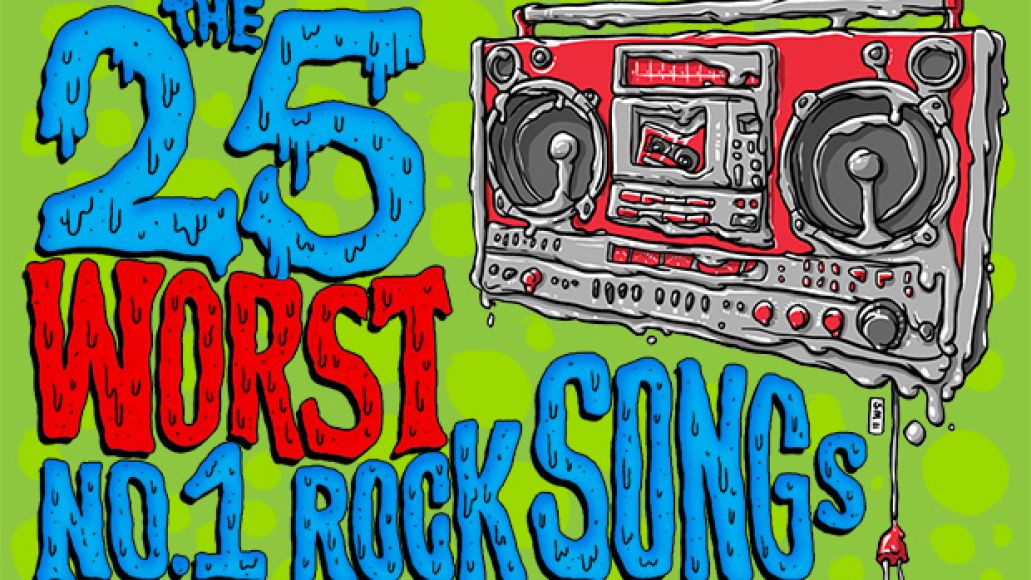 In March of 1981, Billboard introduced Top Tracks, a new chart designed to measure the airplay of songs aired on “album-oriented rock radio stations.” Since then, the list’s had several face-lifts and name changes — from Top Rock Tracks to Album Rock Tracks to Mainstream Rock Tracks. Why tracks over singles? Because not all the stuff getting airplay on the radio was a single.

Over the past three decades, the chart’s seen its golden days (Tom Petty and the Heartbreakers’ “You Got Lucky”; Pat Benatar’s “Love Is a Battlefield”), its proud moments (The Replacements’ “I’ll Be You”; R.E.M.’s “Losing My Religion”), its loud times (Soundgarden’s “Blow Up the Outside World”; The Offspring’s “Gone Away”), and its confusing twists (Kiss’s “Psycho Circus”; Eddie Money’s “The Love in Your Eyes”).

The chart’s also had its share of lousy stretches — many of them downright horrific. And because we’re pessimists, we decided to collect the very, very worst of them* and carve it down to a list of 25 scumbag tracks. So, as you click on through, remember that each entry we included was once on top of the world… of rock, that is.

* We opted to ignore Nickelback, namely because we wanted to challenge ourselves.