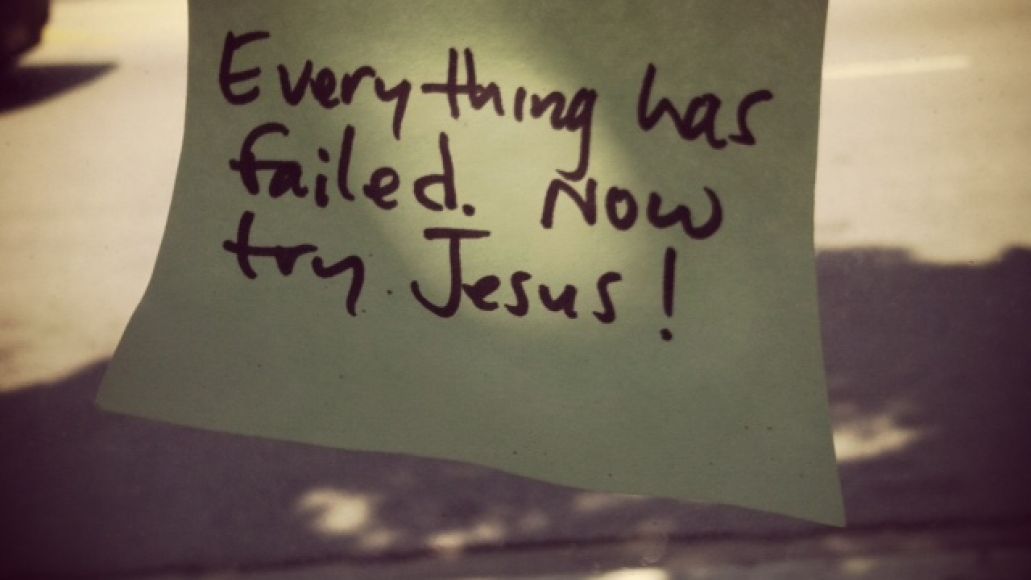 Jesus isn’t the problem with Christian music. Nor is the openness of devout artists. Nor is the occasional mid-concert worship service, when heavenly tongues bombard your ears and every hand in sight reaches for the rafters. (Okay, maybe that’s part of it.)

The problem is that most Christian music is really, really bad.

As a lapsed born-again Christian, I carry an abiding respect and affection for music that earnestly tries to channel the spiritual. That’s why I collected 10 sincere songs about the Christian savior that don’t make me want to puncture my ears with a rusty crucifix. These songs prove that an artist’s religious faith—even when put on display—doesn’t need to alienate secular listeners, especially those willing to discern the universal from the devotional.

Satan, not Christ, was always Daniel Johnston’s true obsession. Songs like “Devil Town”, “Don’t Play Cards with Satan”, and “Held the Hand” showcase the troubled singer’s clear mistrust for red devils, a fixation likely brought on by his aggressive religious upbringing. But in 1988, a show at New York City’s Pier Platters found a warbling Johnston rattling off prophetic perplexities (“Number 7 is Jesus Christ”) before launching into an a capella version of “Prepare to Meet Thy God”—credited on 1990 as “Careless Soul”. Johnston’s cracking voice overwhelms with unbridled emotion as he warns listeners to repent, as death could come at any moment. His heartrending reaction to the hymn is understandable, especially when considering the singer was on the verge of a life-threatening mental breakdown that would have him institutionalized. “Careless Soul” is not an easy listen—you can almost hear the audience’s eyes gluing themselves to the floor—but it’s that rare, uncomfortable performance that slowly, achingly transforms music into a cry for help.

Relient K’s sophomore effort, The Anatomy of Tongue and Cheek, found Christianity’s answer to Blink 182 in transition. Goofy tracks like “I’m Lion-O” and “May the Horse Be with You” hearkened back to the band’s rascally debut LP, while mature songs like “Failure to Excommunicate” hinted at the darker, more nuanced direction they’d take on 2004’s Mmhmm. No song, though, stands out more than “For Moments I Feel Faint”, a gentle ballad that finds singer Matt Thiessen asking listeners to “never underestimate my Jesus.” With its crisp acoustic strums and sweeping stings, the song sticks out like a sore thumb on a record of mildly distorted power chords. In a worship setting, however, the lyrics serve as an inspirational reminder of how hope and trust are integral to human survival. The song has since become a staple at Christian churches worldwide, providing parishioners respite from that “Mercy Me” song people just have to be sick of by now.

In this age of Yeezus, it’s hard to believe Kanye West piqued the ears of America by rhyming about his need for Christ. In a way, though, it falls directly in line with the rapper’s history of attention grabs. “But if I talk about God my record won’t get played, huh?” he spits after lamenting the state of rap lyrics, most likely while stomping on the floor and refusing his lunchtime Cheerios. But hey, not only did it help propel ‘Ye to stardom, it feels, well, sincere. When he sings, “I want to talk to God but I’m afraid because we ain’t spoke in so long,” he’s culled sympathetic nods from every lapsed Christian in hearing distance. It also doesn’t hurt that the song is catchy as hell, a fine showcase for Yeezy’s ability to unleash rhymes with the grace and fluidity of a velvet-tongued orator. Looking forward to its inevitable sequel, “Yeezus Struts”.


Debby Boone – “You Light Up My Life”

Debby Boone’s take on “You Light Up My Life”, a dreamy ballad backed by howling strings and plunking piano, reinterpreted Joe Brooks’ starry-eyed original as an ode to her Lord and Savior. Not all the lyrics transition well—Boone posits Christ as a satiation of her romantic desires, which is all kinds of dangerous—but the sentiment carries through, especially as the embrace of faith is often described as coming from darkness into light. The song was memorably used in Todd Solandz’s Happiness, when Russian conman Jared Harris lured the perpetually shat-upon Jane Adams into bed with an acoustic rendition. It’s a queasy scene, especially since, these days, the song is overwhelmingly associated with faith (LeAnn Rimes included it on an album of inspirational songs), but it was chosen for a reason. “You Light Up My Life” is passion made manifest.

Mac Powell is the lead singer and founder of Christian rock superstars Third Day, a band that epitomizes much of what people hate in faith-based music—not to mention the band I used to call the Nickelback of Christian rock. Third Day is a group of decent enough songwriters sure, but, like Joel Osteen, they’ve accrued a huge following by packaging faith in an all too easy-to-digest package. “God of Wonders” isn’t that much different than their usual fare, but the difference lies in Cliff and Danielle Young, a married couple whose heavenly voices seem to rise from the primordial. The whole song, in fact, comes coated in a sort of ethereal haze that some might call overproduction, but I call coziness. It’s the kind of song you’d hear at a hip, youth-oriented Christian church, the kind of place that’s so warm and inviting you’re willing to overlook the self-satisfied smugness behind all those plastic smiles and weirdly firm handshakes.


The Welcome Wagon – “But for You Who Fear My Name”

The Welcome Wagon consists of Reverend Thomas Vito Aiuto and his wife, Monique, a pair of musicians that run a Williamsburg church and pal around with Sufjan Stevens, who produced their debut record. The connection explains the sonic similarities between Welcome to the Welcome Wagon and the bombastic twee of Stevens’ mid-career work, which complements their gospel trappings better than you might imagine. Gentle percussion, handclaps, and loopy banjo usher us into “But for You Who Fear My Name”, somehow turning a song about fearing the wrath of God into a soul-stirring sing-along that’s destined to convert any number of the sky-gazing, tattooed churchgoers. Goodbye, Buddy Christ. Hello, Hipster Jesus!

dc Talk is something of a joke these days, which is too bad considering its central trio’s diverse talents merged surprisingly well. Sure, their gimmicks were cheesy and their aesthetic dated, but the gang often eschewed the vague generalities of most Christian acts in favor of personal introspection, penning lyrics that helped Christian teens sort through a burgeoning relationship with Christ better than Kirk Cameron ever could. “In the Light”, for example, finds the gang skirting hollow maxims and masculine posturing for a litany of surprisingly self-deprecating observations. Christians, if we’re being honest, spend most of their lives feeling like total shit. They silently condemn themselves for every curse they uttered or ass they ogled or filthy joke they snorted at, all the while feeling as if their fellow parishioners are breezing through life sans sin or temptation. “In the Light” acknowledges the heretofore squeaky-clean musicians’ myriad shortcomings before expressing their need of a savior. It’s a surprisingly personal, self-eviscerating song packaged in the glossy trappings of early ’90s pop, and I wouldn’t be surprised if it saved more than a few lives. Or at least made kids a little less ashamed of the porn beneath the mattress.

Before turning into sentient blobs of hair gel, the boys of Switchfoot earnestly wove Christian devotion into the fabric of their loose-fitting indie rock. The songs on 1997’s The Legend of Chin were frisky but mature, deftly cycling between sneering aggression (“Bomb”), jaunty pop (“Chem 6a”, “Ode to Chin”), and sad bastard sway-alongs (“Concrete Girl”, “Don’t Be There”). Side B standout “You” might be their most Jesus-centric song, a melancholy, string-soaked ballad that surrenders to one of Christianity’s most contentious tenets. “I find hope when I’m let down/ not in me/ but in you/ it’s in you,” frontman Jon Foreman croons, knowingly echoing the desperate prayers of Christians everywhere. It’s an unpopular ethos—that of achieving inner peace by relinquishing your burdens to an unseen force—but it’s also one of the faith’s most appealing traits. Foreman, hands probably reaching towards the recording studio’s ceiling, wants to believe it just as bad as his brethren, even if his song seems to wordlessly acknowledge the possibility that God might not be listening at all.

“Flood” hit MTV in 1996. It fit right in. Sure, Jars of Clay’s steel-stringed acoustics weren’t as heavy as their Alternative Nation contemporaries, but the band’s furious strumming felt just as urgent as the sprays of sludge pouring from the amps of Cantrell and Cornell. Waves of black rainwater roil and crash against an instantly memorable sing-along chorus that’s bookended by the ghostly vocals of Dan Haseltine, who sounds as if he’s singing from a splintered canoe. They were Christian? Who knew? Who cared? I, an atheist pre-teen, sure didn’t. “Flood” is basically the only faith-based song to have made a dent in the mid-90s alterna-scape, that strange period where flannel-colored grungers began stumblin’ the sunny pastures of alternative whatever-you-wanna-call-it. The song then—with its stormy disposition and soulful undercurrents—was a hallmark of that transitional period, not because of its religious leanings, but because of the merits of its musicianship. And if that’s not enough, “Flood” was produced by King Crimson’s Adrian Belew. So there. 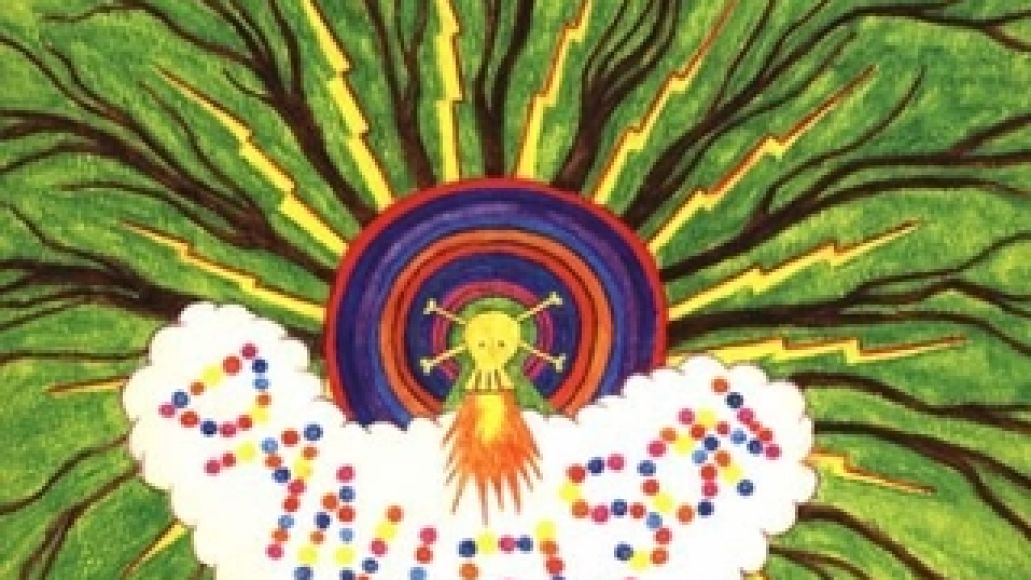 There’s a moment in Danielson: A Family Movie (or Make a Joyful Noise HERE)–the 2006 documentary about Daniel Smith and his coterie of musical kinfolk—when a radio DJ asks him to explain the origins of the name Danielson. Smith replies that he is both a man and a son of God—thus, Danielson. The DJ doesn’t get it, and the interview devolves into awkwardness. Every Christian can relate. There’s no easy way to describe the amorphous nature of the Holy Trinity—how God, Jesus, and the Holy Spirit can be separate, but also one—but that’s never stopped the eccentric yelper from trying. Several aspects of Danielson, from its fluid name to its album titles and bizarre lyrics, embody this concept.

But it was never explored more directly than on “Brother:Son”, the closing track to Smith’s sole record under the moniker Br. Danielson. “You are daughters, you are sons, as Papa and His Son are one,” Smith caterwauls before echoing the voice of the Spirit: “…and there me they will see he says fear not announce to the brothers of me.” Take a breath, then ask yourself the same thing Smith does, “Who is this? Son of Man? Who?” He’s confused even himself. He doesn’t pretend to get it. Smith’s faith is, like “Brother:Son”, a cacophonous thing, a jagged, cathartic, sometimes ugly celebration of the unknown. And isn’t worship at its best when luxuriating in the mysteries of faith, the endless kinks and contradictions, before launching them into heaven with an off-key hallelujah? Maybe it’s just me.

The Top 10 Songs About Jesus (by Christian Artists)