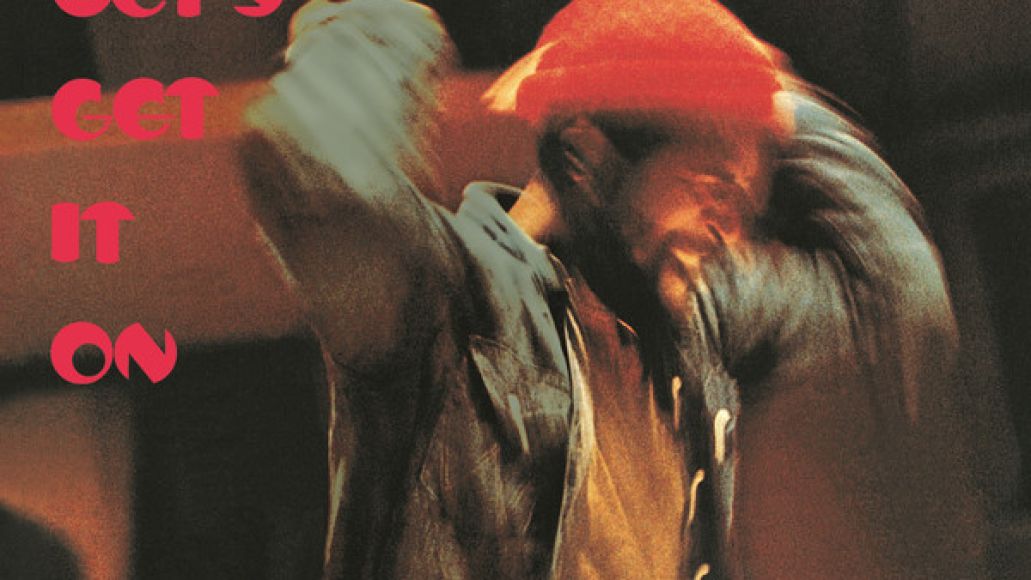 In this week’s edition of Dusting ‘Em Off, Senior Staff Writer Len Comaratta and Staff Writer Zach Schonfeld celebrate the 40th anniversary of Marvin Gaye’s seminal long player dedicated to love, lust, and other matters of the heart. The pair discuss the opener’s ubiquity and its less sexual roots, Gaye’s sordid history regarding his father, and how you can come to the record at any age.

Len Comaratta: I have always loved soul and obviously placed the inimitable Marvin Gaye in the upper pantheon of soul vocalists, but when it comes down to it, I never really thought much about this album until I was almost out of college (’92-’93). I grew up with the golden oldies of classic Motown, and Gaye’s sweet songs certainly populated a lot of that. His iconic What’s Going On was chock full of hits and, of course, his final hit “Sexual Healing” was nearly ubiquitous on the radio at the time of its release.

I first bought a copy of Let’s Get It On on CD in the early ’90s. It was a legit Motown release, but one of those prints where the album cover image was small and centralized against a bland background. There were no liner notes or player information, just a track list. I listened to the whole album, but more often than not, simply found myself listening to the title track on repeat. In ’98, when the album was reissued (in its original form, not the two-disc reissue that came later), I sold back my sub-par copy and re-purchased the disc solely for its bigger cover image. But in that copy I was treated to a bonus of liner notes written by Gaye himself. It was after reading Gaye’s notes that I began to think about Let’s Get It On as more than just an album about sex.

Zach Schonfeld:  Like you, I never bothered listening to Let’s Get It On (beyond its iconic title track, which anyone who has seen a comedy that contains a clichéd sex scene has heard) until my last year of college; my previous familiarity with Gaye never extended far beyond What’s Going On. But for me, that wasn’t the early ’90s. It was several months ago. Behold, I am young.

I bought an early, worn pressing of the album on vinyl at a record fair on my campus hosted by the college radio station. Of course, the title track tends to hog the attention. I sometimes wonder if there exists a mathematical formula out there to prove that the song’s first three seconds — those three wah-wah notes before the drum hit — constitute the greatest intro in pop music. But I quickly realized, as you did, that it is more than an album about sex. Between the gorgeous desperation of “Please Stay (Once You Go Away)” and the sad, resigned sighs that close “Just To Keep You Satisfied” (“It’s too late for you and me/ Much too late for you to cry”), there’s a dark, lonely aura to the album that I never expected — and which eventually drew me beyond those three introductory notes. 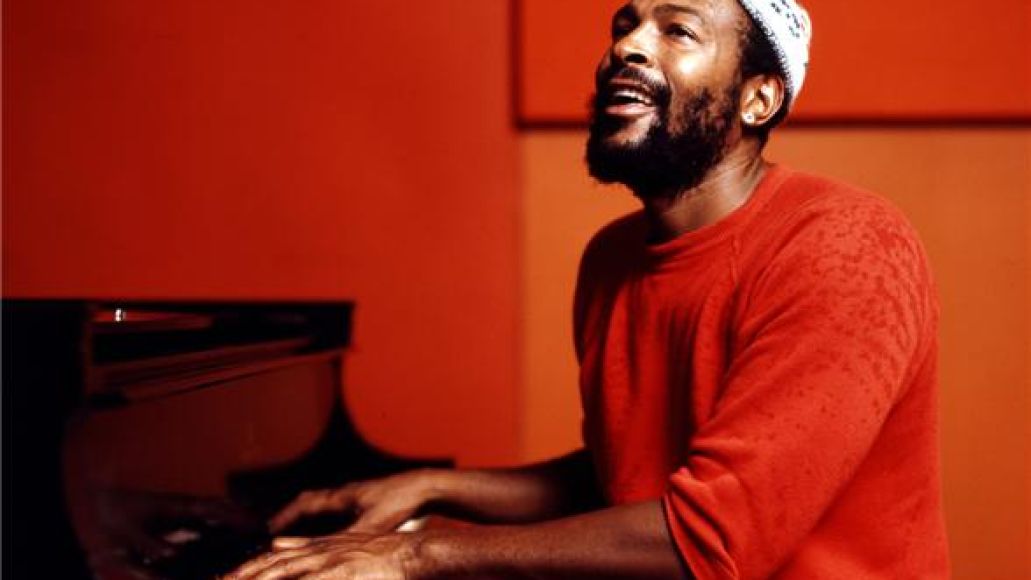 LC: I’m glad you mentioned how the song gets used to the point of cliché in contemporary comedies, because its use in those films is exactly counter to the message of the song. It is often soundtracking an awkward sex scene rather than one having anything to do with love per se.

High Fidelity is perhaps the one film that immediately comes to mind where the song was actually used in a rather mature fashion. Sure, Jack Black added his own ‘Blackness’ to the song, but he never took it to the point of parody. Instead it was used loosely as a theme for the two main characters’ reconciliation and love rather than make-up sex. And it was also in that film where Cusack’s Rob made the list of Top Five Side One Track Ones and included “Let’s Get It On”. It is, in fact, one of the greatest opening numbers on an album, in any genre. That opening ‘wah-wah-wah’ might as well be a mating call.

Let’s Get It On can arguably be considered a concept album (though not quite to the extent of What’s Going On?), especially with regard to how all the songs are linked via sex, love, intimacy, etc. The album certainly courted controversy due to its overtly sexual themes, but Gaye had always been a sexually charged performer. It was just that during the sweet sounds of Motown’s ’60’s heyday, that side was often hidden under a slick veneer. Before the lyrics, the song “Let’s Get It On” itself was not originally sexual in nature, but a reference to the axiom “let’s get on with life”, a sentiment expressed by the song’s co-writer and co-producer Ed Townsend after his experience in alcohol rehabilitation. It was during the song’s development that Townsend had Gaye improvise the lyrics, whereby the song began to take the form that we recognize.

It’s well known that Motown head Berry Gordy, Jr. and Gaye butted heads while the artist worked on What’s Going On?, but after that album’s success, Gaye was given more freedom to explore and experiment with regards to his music. This began showing up in WGO’s follow-up, the soundtrack to the Blaxploitation film Trouble Man, which saw Gaye expanding on his use of strings and orchestration (not just the funky side often associated with the film genre) and which were, to a degree, perfected on Let’s Get It On. An interesting side note: much of the album actually began during Gaye’s work on What’s Going On? Recording for Let’s Get It On began in June 1970 and was completed a month before its August ’73 release. (What’s Going On? dropped in May ’71).

Let’s Get It On is a homogeny of styles and sounds that not only reach back to Motown’s earlier output (“Come Get To This”) but paves the way for the rise of both the Quiet Storm style of soul that dominated AAA radio in the mid-late ’70s (“Distant Lover”, “Just To Keep You Satisfied”, “If I Should Die Tonight” and of course, “You Sure Love To Ball”) and the Philly soul sound of Gamble & Huff, who utilized strings unlike any producer before them (with the possible exception of Phil Spector). The proto-disco funk heard on Gaye’s solo follow-ups to LGIO (he did a couple albums with Diana Ross), 1976’s I Want You, as well as the heartbreak throughout Gaye’s album Here, My Dear (1978), which lays bare the artist as he openly explores the dissolution of his and wife Anna Gordy’s marriage.

Gaye was perhaps the biggest act on Motown’s roster, and one of the most responsible for the label’s shift from sweet, uptempo pop soul to the more politically charged and socially conscious music heard in the early ’70s. I would argue that it was Gaye’s success going up against Gordy that allowed for Stevie Wonder’s rise in the early-mid ’70s, who also had to fight the label in order for his art to be realized, when he too was becoming more socially conscious.

ZS: I’m shocked and bemused to learn that the song’s title wasn’t originally sexual in nature. I suppose the oft-forgotten and arguably superfluous groove of a refrain, “Keep Getting’ It On”, speaks to the intended meaning. How long has “getting it on” as an idiom even existed? My Internet sleuthing has also revealed that the title track itself was inspired by Janis Hunter, which has to be a bizarre honor to hold — like, how can it feel to know that you inadvertently inspired one of the most iconic sex jams of all time?

“Let’s Get It On” ought to be banned from modern comedies, just as “Hallelujah” ought to be banned from singing competitions. But that High Fidelity scene! I’d totally forgotten about that. Just as that moment indicates, the album’s relationship with sex and love is more complicated than it first appears. As history succinctly notes, Gaye’s own relationship with sex was troubled. He’d been simultaneously abused and suppressed by his fundamentalist preacher father. Later, his anxieties grew into fully fledged impotence; as one biographer puts it, “his view of sex was unsettled, tormented, riddled with pain.” So when he sings, “There’s nothing wroo-oong with mee-ee loving yoouu!” you can assume he’s reassuring himself as much as his listeners. And as “Just To Keep You Satisfied” dwindles on that golden, bittersweet refrain — “It’s too late, baby” — you have to remember that Let’s Get It On’s coda is as defeated as its intro (you know, the mating call) is triumphant. But the note Gaye appends to the album’s liner notes suggests some sort of reconciliation: “I don’t believe in overly moralistic philosophies,” he writes in part. “Have your sex, it can be exciting, if you’re lucky. I hope the music that I present here makes you lucky.”

Anyway, you’re right that the album marked a shift by dint of its sexual themes. You point to Stevie Wonder as a beneficiary; I can’t help but think of Prince’s career setting off five years later and wonder how much the Purple One’s early sex jams — the really bold, weird stuff, like “Anna Christian” and “Sister” and “Let’s Pretend We’re Married” — can be traced back to this.

But I digress; those early Prince records are funky in such a stiff, cold, 1981 way — nothing like the warm Motown-infused tones and strings and voices that run through “Distant Lover” and “If I Should Die Tonight” and (my absolute favorite) “Please Stay (Once You Go Away)”. 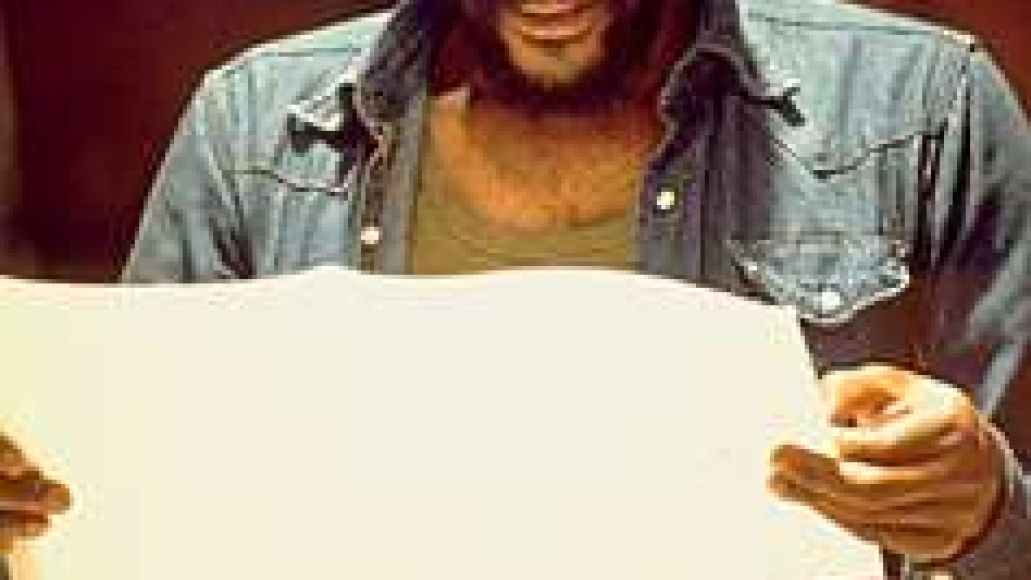 LC: Yeah, the title track went through a number of iterations, even one from a more political perspective, but in the end, co-writer Townsend eventually convinced all the parties that making the song more sexual in nature was the way to go. And yes, the song’s lyrics were inspired to a degree by Gaye’s meeting (and slight obsession with) Janis Hunter, whom he met through Townsend. His relationship with her was also the inspiration for Gaye’s follow-up I Want You as well as a primary reason behind his and Anna’s divorce.

As for his sexual dysfunctions, a simple scan of the internet will have one come across truth (his father’s abuse) and possible supposition and rumor (forcing his wife Anna to have sex with others while he masturbated and got high). The sweet smile and twinkle in his eyes certainly did seem to provide ample cover to a possibly seedy and disturbing life (and lifestyle).

As for the Stevie/Prince inspiration, I was drawing more from Gaye’s success with the label heads to allow him creative freedom, something that Wonder also obtained after he shed the Lil’ moniker. I am sure Prince would find some inspiration in Gaye but the Purple One tilts his hat a bit more towards Sly Stone (and his bassist, Larry Graham) and George Clinton.

In spite of all of Gaye’s success on the singles charts, he never had a number one record on the Hot 100. Let’s Get It On was Gaye’s most successful chart appearance on the Billboard Album chart, peaking at No. 2. Not even the far more iconic and referential What’s Going On? hit number one (it peaked at eight). Let’s Get It On is certainly one of Gaye’s best recordings, but as mentioned earlier, in my opinion, the album is one of those where you can see the past, present, and future all wrapped in one tight package. The stylistic doors opened with this album gave way to a number of various soul and pop formats over the following decade and to this day still provides inspiration.

Dusting 'Em Off: Marvin Gaye - Let's Get It On