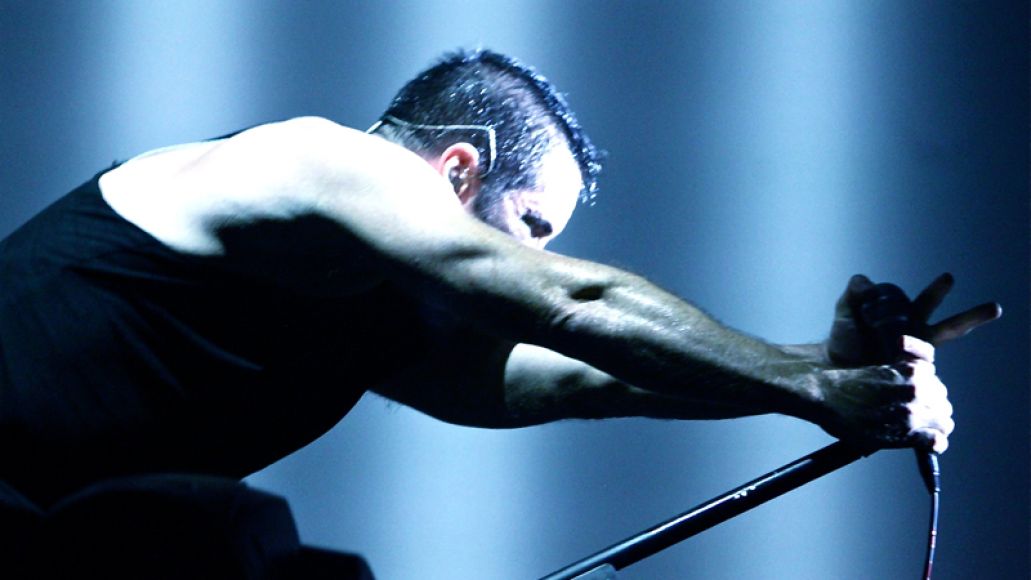 To coincide with the release of their new album, Hesitation Marks, Nine Inch Nails have debuted an elaborate new live show. Inspired by Talking Heads’ 1983 world tour, as seen in the film Stop Making Sense, the performance begins with Reznor alone on stage with the rest of the band slowing emerging around him, and they’re accompanied by smoke, strobe lights, and video screens on wheels. “We’re always pushing the envelope,” Roy Bennet, the band’s lighting and production designer, told The New York Times. “We’re always trying to make people think and keep them on edge and keep them wondering what’s going on.”

As Rolling Stone points out, The Moment Factory, the studio responsible for creating the “wide variety of pre-rendered and real-time content for mobile LED screens,” has shared behind the scenes footage from the tour. Watch it below.

Don’t get too used to this stage setup, though, as following the band’s tour of summer festivals they’ll launch an entirely new production for their North American fall tour. “The fact that we’re doing all this only for these few shows, and then we have to do it over again, throwing all this out to do a completely new thing, with new things that won’t work, that feels a little insane,” Reznor said to The Times.

Hesitation Marks is due out September 3rd via Columbia (pre-orders are ongoing). Check out their full tour docket below.