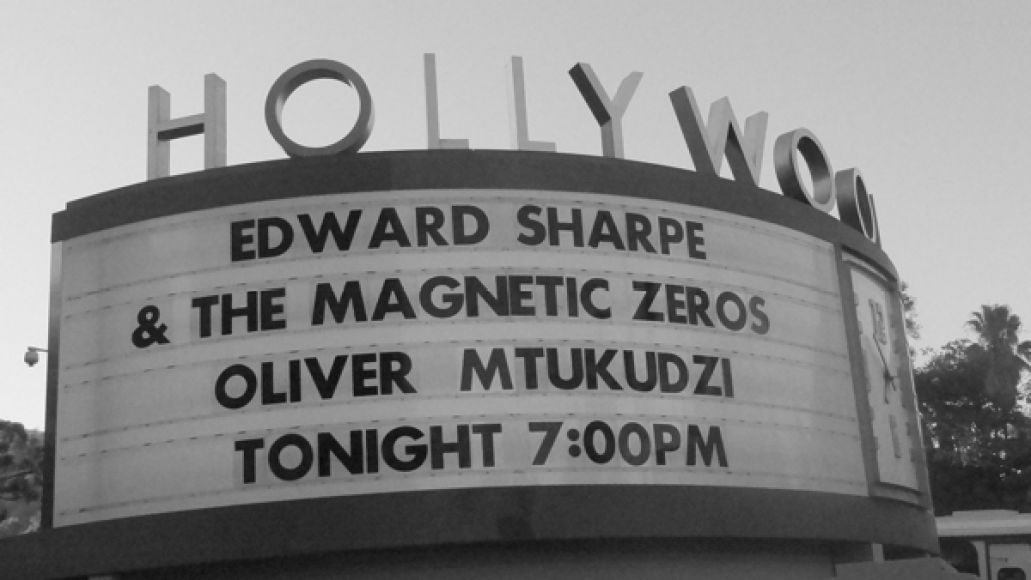 A couple hours before Edward Sharpe and the Magnetic Zeros even took the stage at Sunday’s KCRW World Festival at the Hollywood Bowl, Zimbabwean musician Oliver “Tuku” Mtukudzi’s seven-piece ensemble prompted my concertgoing companion to bill this night as a “battle of happiness.” With Alexander Ebert’s band carrying the bill, such a label was both fitting and perhaps even an understatement given the acts kicking off the evening’s festivities.

Mtukudzi and his lockstep ensemble were radiant, effervescent, and as genuine a purveyor of joy and appreciative gratitude as you could ask for, a breath of fresh air in the Hollywood setting. Not since Charles Bradley took the Bowl stage two years prior have I witnessed an artist as authentically gracious and beaming as Mtukudzi. Early on, his mission statement was clear, as the front man pronounced: “Where we come from, we use music to diffuse tension.” Tension released, this was pure, unadulterated musical joy right out of the gate. Happiness quotient high. 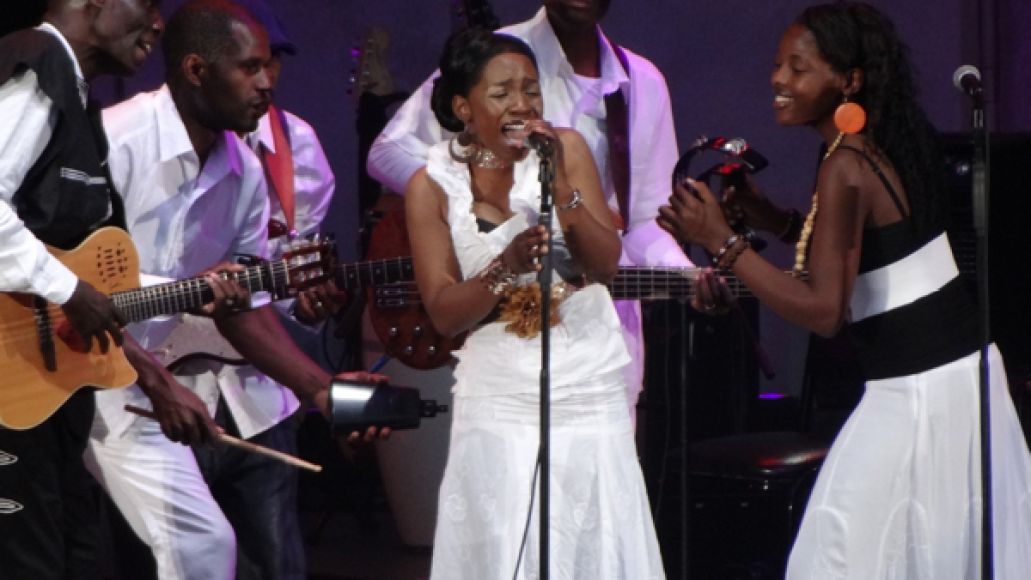 Sun Ra Arkestra’s P-Funk sense of brightly sequined style meshed nicely with the interplanetary jazz the massive collective performed during their set. Notably, a rendition of Charlie Chaplin’s “Smile” and a reappearance during Edward Sharpe’s closing set helped the second of three acts make their mark on Sunday night. Jarring space fusion blended well with more traditional fare as the institution ran through their quick and highly amusing set before a quick stage flip to Edward Sharpe’s set.

Sunday was a homecoming for Ebert’s sprawling collective after a busy 2013 that has seen the colorful company gearing towards an even busier fall in support of their brand-new, self-titled third LP. The visual setup was appropriately stunning and filled out (given the size of the Hollywood Bowl’s signature shell) with a massive projection screen featuring blurred, 3D-esque imagery and bright backing lights set up onstage. From the opening “Man on Fire”, it was clear that although members of the (I lost count) massive band would take turns with lead vocals and instrumental duties, this was Alexander Ebert’s show, and if he could’ve embraced and chatted up each of the roughly 14,000 folks in attendance himself, this front man-of-the-people probably would’ve. For starters, Ebert took a visibly unsuspecting crowd member named Luke (wearing khakis and a sports coat – not your typical Magnetic Zeros attire, but this was Sunday at the Bowl after all) for a walk around the pit area, giving him a chance to take the mic and join a short dance on a platform towards the end of the tune. 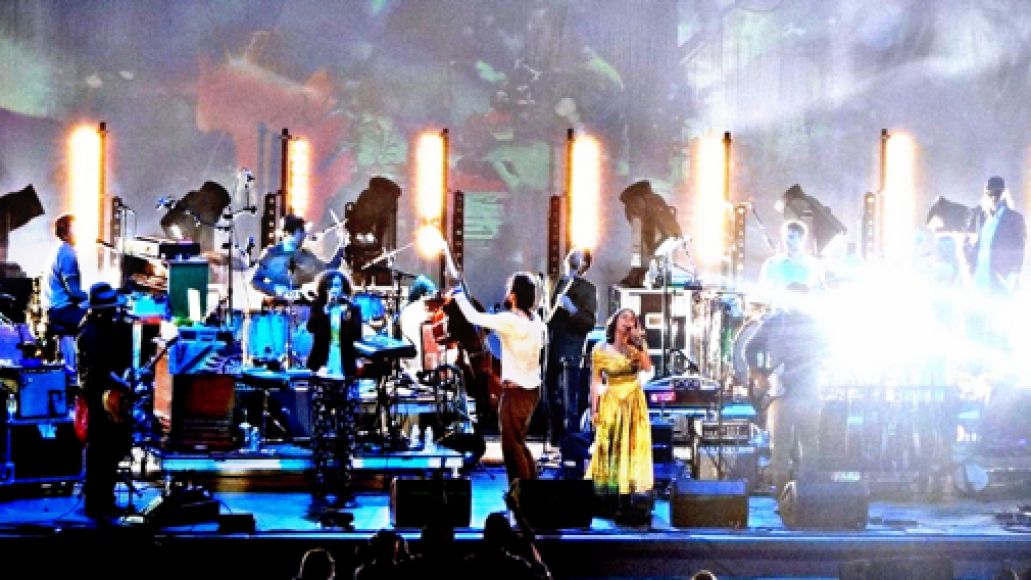 The freak gospel revival theme and vibe was first exuded during “I Don’t Wanna Pray”, off their sophomore album Here, as countless voices onstage repeated the refrain “I love my God/ God made me” before a bluegrass-y pickin’ party ensued. In perhaps the moment that produced the loudest crowd reaction of the night, Ebert gave the mic to an extremely talented woman sitting in the champagne-and-caviar seats down below the stage for a fantastic moment of improvisational belting that made me think for a second that Ebert was going to sign her on for the rest of the show as a backing singer.

During “Janglin’”, Ebert took another audience member’s camera up on a tour of the stage (while continuing to sing and banter), producing a nice memory for the attendee to take home (and likely share to a barrage of likes, hearts, and RT’s). Ebert dedicated “Mother” to the many matrons of the band members in attendance and took a seat on the ledge of the stage for a rare breather moment. “Jade” produced a extraordinarily profound and quiet moment after Ebert sang, “You won’t soon forget the name.” 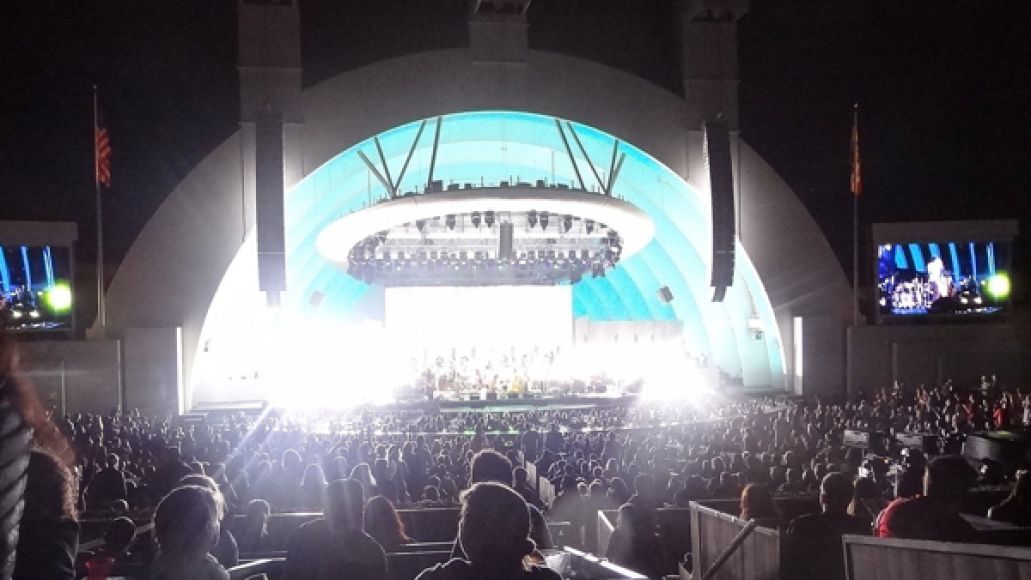 Ebert and Co. continued calling the setlist on the fly, although it appeared from the structure of the show (see below) that it wasn’t entirely off-the-cuff and fans got mostly what they came to see. The show would’ve been splendid without, but wrapping the night with an extensive and participatory “Home” (complete with storytelling moments in the crowd) with the assistance of Sun Ra Arkestra sent everyone heading for the exits fulfilled.

In this kind of “battle,” everyone wins.

Edward Sharpe and the Magnetic Zeros Setlist:
Man on Fire
I Don’t Wanna Prey
That’s What’s Up
Janglin
Child
If I Were Free
Mother
40 Day Dream
Jade
Fiya Wata
They Were Wrong
Better Days
Up from Below
Home (w/members of Sun Ra Arkestra)