This year’s Outside Lands is not only my first music festival, but my first time on the west coast. So imagine my bewilderment upon entering Golden Gate Park yesterday. Surrounded by lush forestry, the park’s central grounds had been transformed into a sanctuary of music, booze, and recreation. This place was alive, and I’d never seen anything like it.

Now in its sixth year, Outside Lands has grown a little with each installment (attendance is now up to 65,000) and continues to offer a diverse lineup of big name acts and lesser-known upstarts. One could swing by the country-themed Panhandle Stage, sit on hay bails, and catch rock acts such as The Men and Wavves. Or if guitars weren’t your thing, maybe the soulful croons of Jessie Ware at the Sutro Stage (too bad D’Angelo canceled at the last second). The Heineken Dome offered sweaty EDM, and The Barbary hosted comedians Maria Bamford and Jeffrey Ross. There really was a little something for everyone and, come nightfall, a truly special musical experience for all.

Anticipation for Sir Paul McCartney’s headlining set grew throughout the afternoon, with multiple acts declaring their appreciation for the living legend. “We’re honored to be here, playing in front of Paul McCartney,” said The National’s Aaron Dessner. A universal feeling of “Holy shit, I’m seeing a Beatle” swept across the sea of bodies that had manifested in front of the stage, and when Paul finally walked out — the sun setting behind him — thousands of voices erupted in celebration.

Over the next three hours, he played the hits, told charming anecdotes, brought fans onstage and “tattooed” his autograph on them, even unleashing a pyrotechnic-firework show during “Live and Let Die”. It was magnificent. People were crying when it was over. This festival newbie headed home in total shock, every expectation shattered.

If that was Day One, I can’t wait to see what the rest of the weekend has in store. 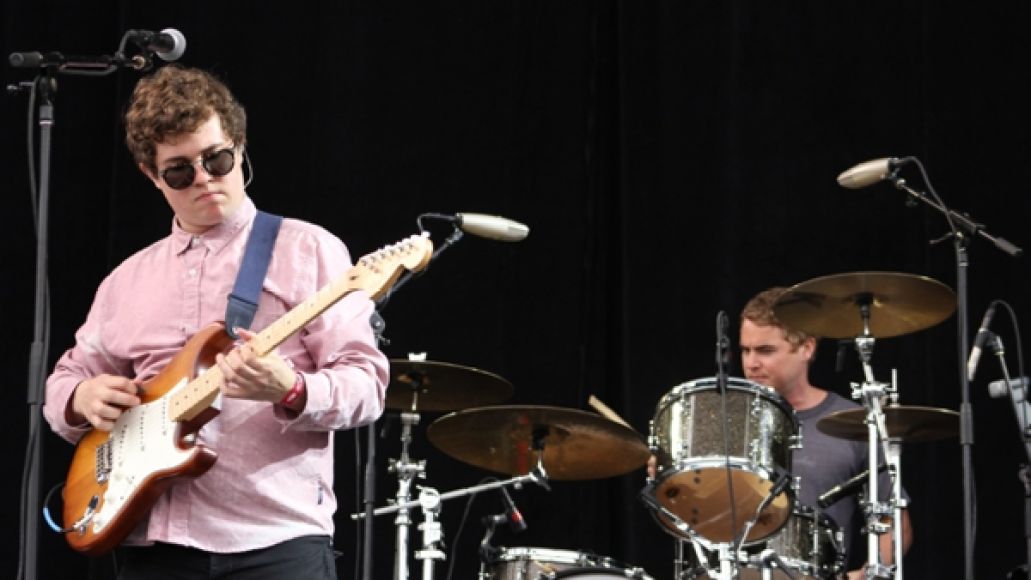 Playing the main stage at any festival has to be daunting. There’s always the possibility you’ll be entertaining around a thousand fans, only it’ll look like 100 souls showed up. This was the case for Surfer Blood, who did a great job shrugging off the curiously unfortunate image. In support of their long-awaited sophomore album, this past June’s Pythons, the Florida outfit kept things casual amidst the great wide open as they ran through their usual fun-loving set of indie surf pop. Frontman John Paul Pitts never bucked once, even managing to do his ol’ meet and greet with the crowd during “Take It Easy”. Kickoffs don’t get much better than this. –Ted Maider 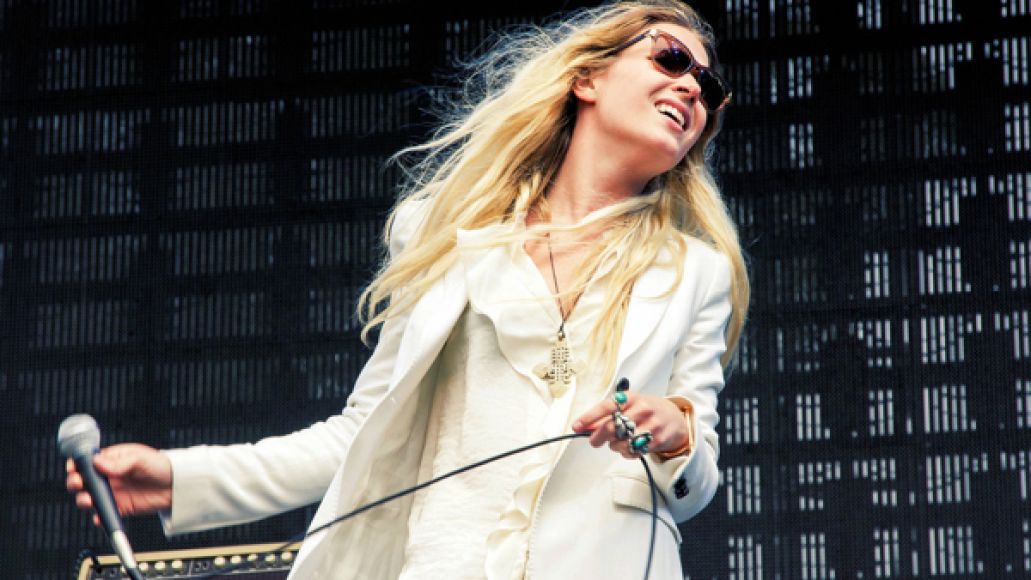 Friday afternoon, Eliot Bergmen, brother of Natalie, asked us to extend our gratitudes toward the blonde Wild Belle frontwoman for lugging their new sound system all the way from Chicago to Outside Lands’ home in San Francisco. We of course obliged, noticing that Lady Bergmen did indeed look extra-thrilled to be rolling through the majority of this year’s Isles post road trip. Her seemingly effortless vocals sailed over the band’s undeniable, Jamaican-tinged flavor that exquisitely flowed through the cool California afternoon (which provided an excess of breeze that caused Natalie to lose her ’70s-ensemble-completing hat to the wind about a song in). –Amanda Koellner 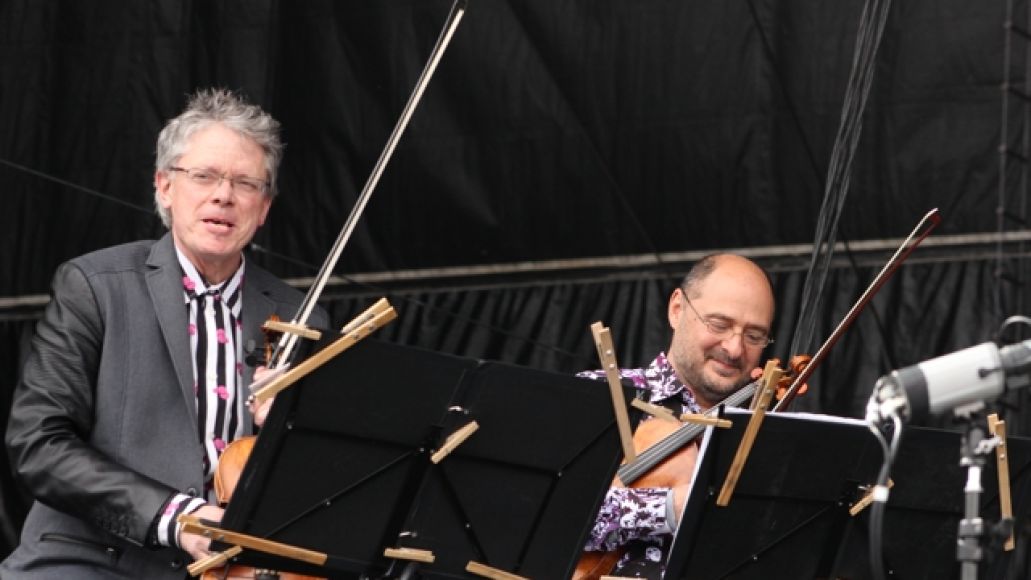 Diehard fans of The National might have recognized the Kronos Quartet from their appearance alongside them on the 2009 fundraising compilation album Dark Was the Night, or perhaps from their recent collaborations with Bryce Dessner. So their cameo backing up a handful of cuts of The National’s blistering set made for a nice bonus for everyone involved (and a one-up of their Lollapalooza set last weekend), but most of all for Kronos, who got to dip into The National’s stacked audience. But they weren’t done racking up new fans on Friday – not even close. Thousands more would learn their name by the end of the night, after another appearance on the Land’s End Stage to provide strings on Paul McCartney’s first song of his last encore, “Yesterday”. –Steven Arroyo 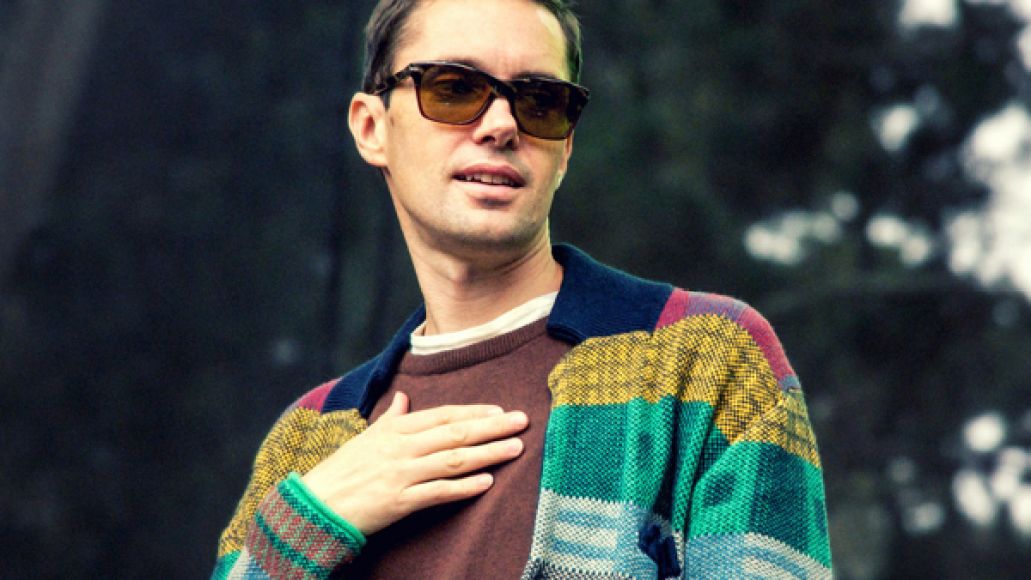 When Rhye made their television debut on Jimmy Kimmel Live!, deep blue lights disguised the band, particularly the face behind that mysterious, sensual contralto of male singer Mike Milosh. And when they took Woman to intimate clubs across the country this spring, like, for instance, their gig at Chicago’s Schubas Tavern, they asked for no photography, no talking, and for the bars to be closed for the duration of their set. Being able to hear a pin drop for the enchanting, sexy ride that is Rhye proved incredibly effective, so it was fascinating to see the duo, accompanied by a multi-piece band, gear up to take on a festival crowd of chit-chatters, beer-swiggers, and joint-passers Friday afternoon. Milosh seemed anxious about the band’s sound before they began, but any doubts must have been put to bay as soon as he realized the adoring crowd was his, and he didn’t need a plethora of smoke or the veneer of club lights to get them. –Amanda Koellner

Nile Rodgers and Chic luck out 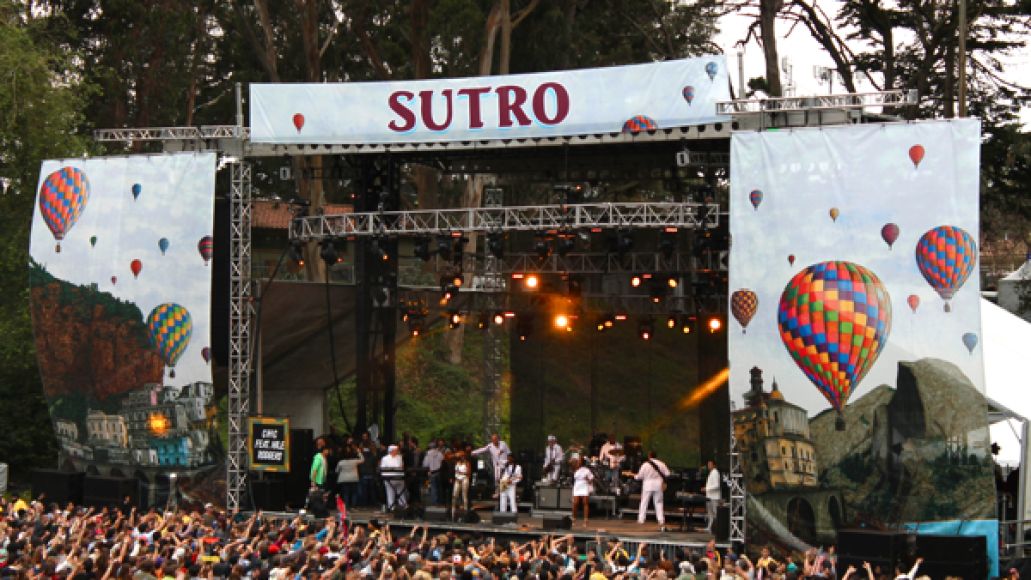 “Comeback Artist of the Year” doesn’t typically entail comebacks outside of music, but all things considered, you could make the argument that Nile Rodgers is the only one who should even be considered for the designation in 2013. Days removed from announcing he’s “all clear” of prostate cancer, Rodgers and his disco titans Chic appeared as last-second replacements for neo-soul singer (and another mid-comeback artist) D’Angelo: a call-up that would have drawn precisely 10 Outside Lands attendees one year ago, probably.

But a year can make a world of difference, especially if your guitar work is featured on the most popular song of the year, prompting a slew of listeners otherwise too young to give Chic a second glance to reconsider all your prior work. “Le Freak” and “Good Times/Rapper’s Delight”, the last two songs of their set, wouldn’t have been so electric without that “Get Lucky” guitar line to make Rodgers’ percussive strumming suddenly click for those under 40, which it very clearly did.

Visibly grateful by the end, Rodgers pushed his set time limit just to thank every single band member by name before signing off: “I am the writer, producer, guitar player of the band. My name is Nile Rodgers. We are Chic. Thanks for making this record number one.” Exit music: “Get Lucky”, duh. But did luck have anything to do with it? –Steven Arroyo

The National and friends get heroic 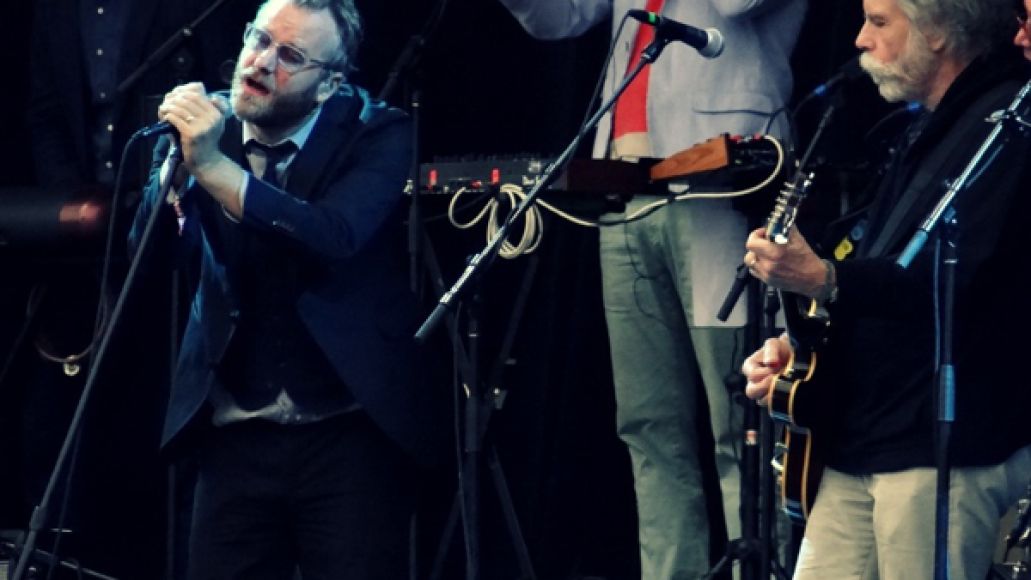 Appropriate that the overcast sky started to spit a light rain as The National took the stage. A gloomy mood for gloomy tunes, as the Brooklyn quintet launched in a set that was heavy on their latest LP, the brooding Top Star-earning Trouble Will Find Me. Frontman Matt Berninger nursed a glass of white wine for the duration, commanding the audience through opener “Fake Empire” and pacing around the stage with an almost nervous anxiety during instrumental sections. For “I Should Live in Salt”, Dessner brought out the Kronos Quartet — the internationally renowned string quartet from San Francisco — which played with the band for most of the set and added a grandiose backdrop the Dessners’ guitarwork. All the while, Berninger got drunker and drunker, moving from wine glass to bottle. “My daughter’s preschool teacher is here,” he joked. “I’ve got to get it together.” So, on a rousing version of “Mr. November”, he literally walked into the middle of the crowd with the mic, shouting the refrain (“I wont fuck us over…”) as he was hoisted into the air. And if that wasn’t badass enough, the band brought out Grateful Dead’s Bob Weir on slide guitar for closer “Terrible Love”. –Jon Hadusek 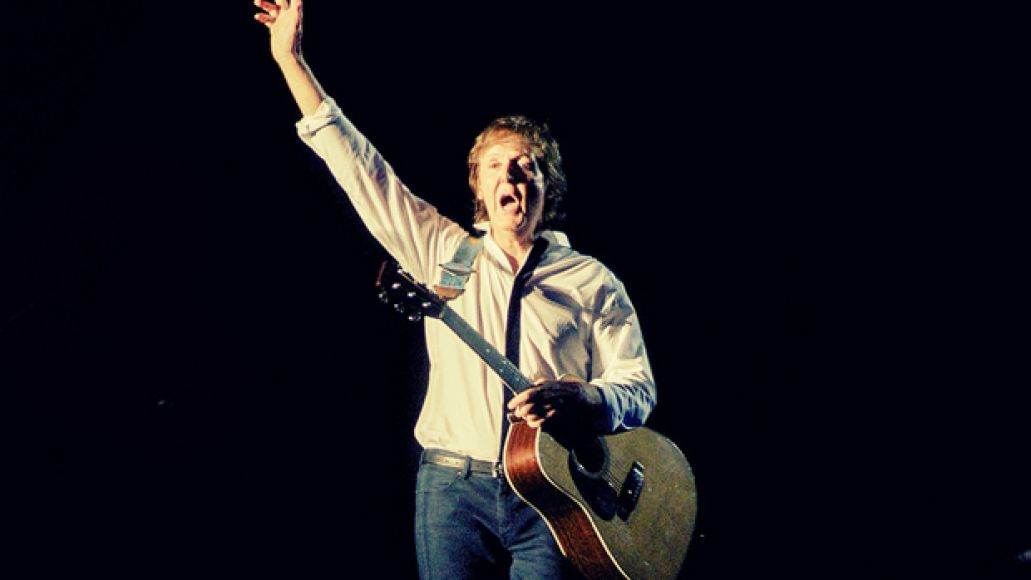 Paul McCartney got sentimental during his headlining set, which concluded the first day of Outside Lands. Between songs, he shared humorous and nostalgic anecdotes about his days with the Beatles, dedicated songs to the late John Lennon (“Here Today”) and deceased wife Linda (“Maybe I’m Amazed”), and genuinely captivated an audience who were simply glad to be in the presence of such a legend. Two lucky fans got an even closer encounter with Macca, as their handmade signs that read “Paul, please be my first tattoo” got them onstage. Paul reached from behind the girls, hugging them as he signed their wrist with a Sharpie. “It was the only way to get the right angle,” he teased. With the lives of two fans changed forever, McCartney and his seasoned band sought to give the thousands in attendance a similarly incredible memory: They played Wings, they played The Beatles, they played Lennon, they played Harrison. After two encores and a closing performance of the Abbey Road medley, Paul bowed and bid farewell. “Thank you, San Francisco. We love you.” –Jon Hadusek

Click here for a full gallery of Day One’s photos.

Top Seven Moments of Outside Lands 2013: Day One