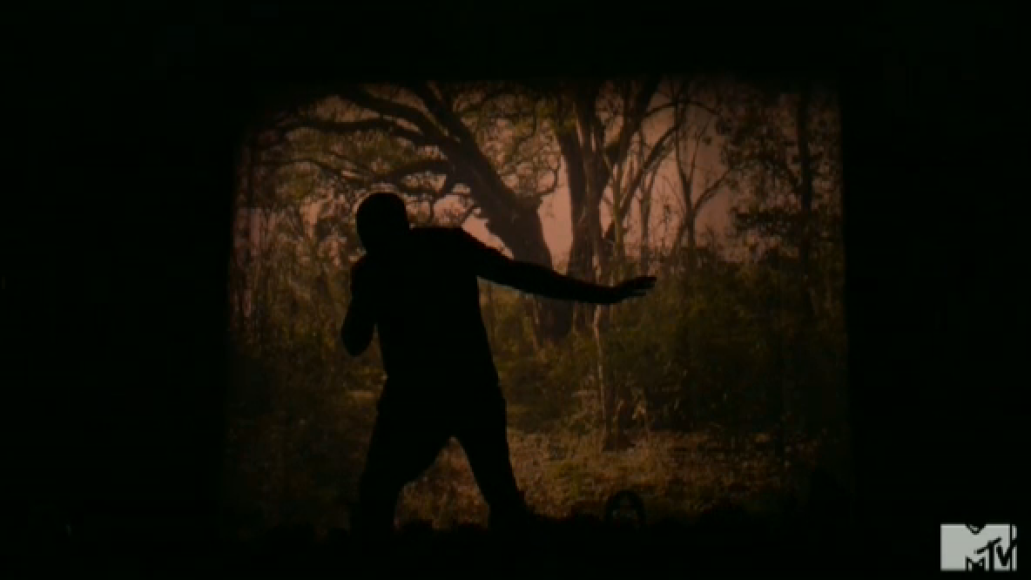 Kanye West returned to the stage at the 2013 MTV Video Music Awards in Brooklyn last night. He performed “Blood on the Leaves”, one of the many standouts from his latest opus, Yeezus. The backdrop was of Steve McQueen’s infamous photograph “Lynching Tree”, and the lighting was kept to a minimum. It was terrific.

Following the performance, Kanye’s website was updated to feature McQueen’s “Lynching Tree” photograph, along with the accompany text: “This tree was used for lynching. Those who were murdered are buried in the ground around the tree.”

Tonight marked Kanye’s seventh time performing on the VMAs, which ties a record set by Madonna.

Kanye has nothing scheduled beyond tonight, though rumors surfaced this week that “Bound 2” would serve as the next single off the album. Maybe that honor will now go to “Blood on the Leaves”?

And speaking of great singles, have you checked out our list of Kanye’s 20 best songs? If not, you should get on that STAT.

For additional videos from the 2013 VMAS, including performances by Drake, Lady Gaga, Katy Perry, and Justin Timberlake with ‘NSync, click here.

Video: Kanye West performs "Blood on the Leaves" at the VMAs