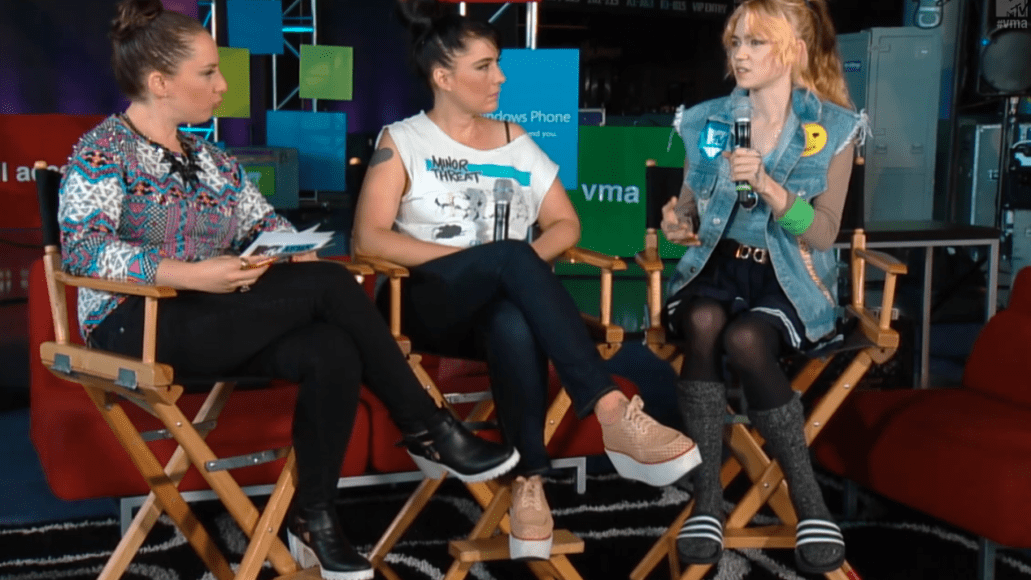 MTV recently hosted a conversation between Kathleen Hanna and Grimes, where they discussed feminism, the riot grrrl movement, Beyoncé, and more.

In regards to feminism, Grimes said, “I see a lot of pop stars coming out and saying ‘No, I’m not a feminist because I don’t hate men.’ There are so many misconceptions about it. You know when you say ‘I’m a feminist,’ it’s pretty open-ended. It can mean a lot of things.”

Meanwhile, Hanna said, “The problem I have is, you come out and say you’re a feminist, and suddenly nobody ever talks to you about your music. You’re supposed to play every domestic violence shelter benefit. Which I am totally thrilled to play. But why aren’t guy bands asked to play things like that? The responsibility is on you to always talk about sexism or racism or homophobia. Why aren’t guy bands who are apolitical supposedly, asked the same questions as people who say ‘I am political’? Because I believe everybody is taking a stand. Whether it’s apathy or stepping forward and saying I care about ending all oppression in the world.”

On Beyoncé, Grimes said, “In my opinion it’s kind of crappy to belittle an artist such as Beyoncé just because she is successful. Maybe she’s successful because she earned it. For me, I don’t even experience her art as pop music. I think the choreography and visuals of the show is a new thing that works in the realm of pop music, but it’s doing a bunch of other stuff too.”

Watch the full interview conversation out over three videos below (via Stereogum),

Watch Kathleen Hanna and Grimes have a conversation