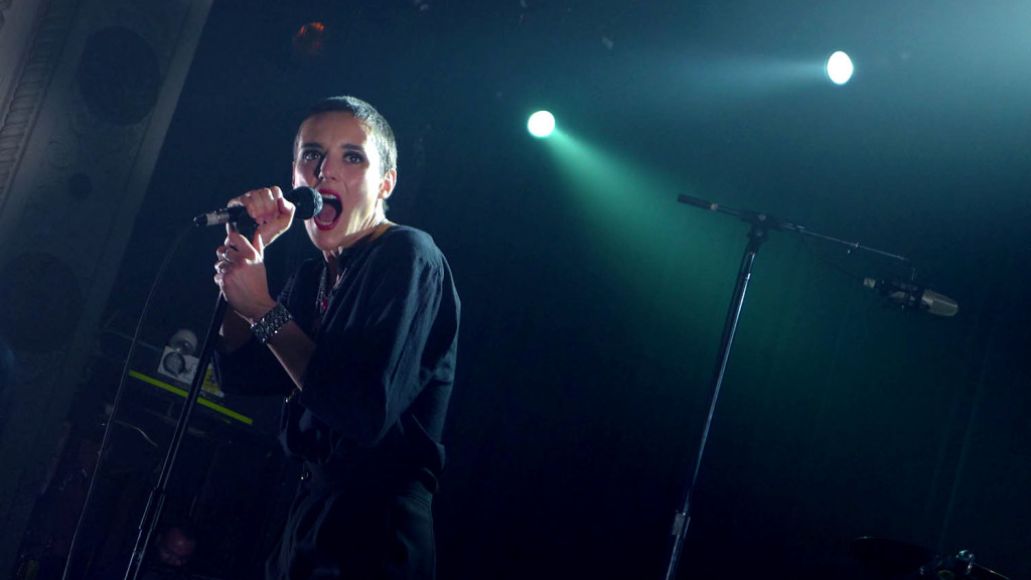 Savages’ authority precedes them. On the doors of Chicago’s Metro and all around the lobby, printed sheets urged attendees in capital letters not to use their cell phones during the performance. The message took. After Duke Garwood played a set of sax-infused drone laid over pre-recorded drum loops, I asked someone standing by the lip of the stage if I could edge in front of him to get better shots (most nights, I’m one of the shortest people in the audience). He hesitated. “I don’t think they let you take pictures,” he said.

Already, the London four-piece have built themselves a reputation as a Serious Band. They’re rarely photographed smiling, and they tend to look best in the austere black and white of Ian Curtis’s afterlife. Their debut LP Silence Yourself churns with finely-tuned, vigorous post-punk songs that dare you to find a flaw in their assembly. But last night at Metro, Savages exposed more nuance in their performance than what fits into their much-discussed image. No doubt they’re a band that values power, but they also keep a sharp sense of humor. 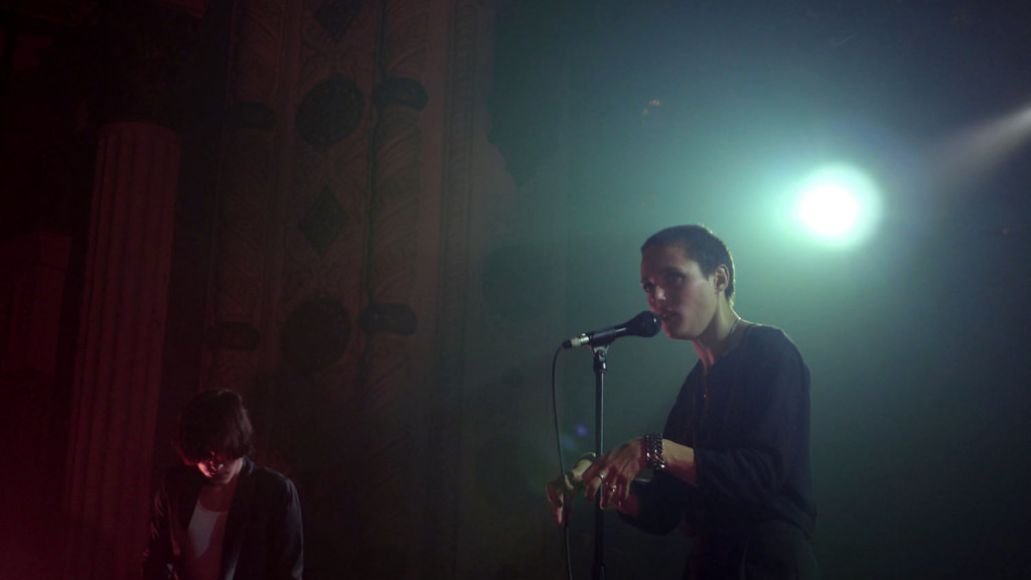 Most importantly, Savages wield incredible presence. I don’t think singer Jehnny Beth stands much taller than I do, but onstage she’s a tower—or more like a windmill, the way she uses her arms. Singing for her is a full-body exercise. She seemed constantly in motion, whether she was shaking an invisible tambourine, stabbing a finger at the audience, or punching the air inches from someone’s face in the front row. As set opener “I Am Here” peaked, her eye contact felt like a blowtorch as she launched each howl. It’s easy to talk about some singers like they simply exude their voice; it’s impossible to miss how much Beth works to command hers.

Flanking Beth on Metro’s ornate stage, guitarist Gemma Thompson and bassist Ayse Hassan seemed to grind every muscle into their playing. Hassan kept her eyes sealed shut while picking at her Fender, while Thompson’s bangs tended to curtain her face. On drums at the back, Fay Milton also kept a long-armed presence, pointing at the ceiling with a stick before smashing it down. Even in all black, no one disappeared into the dark. 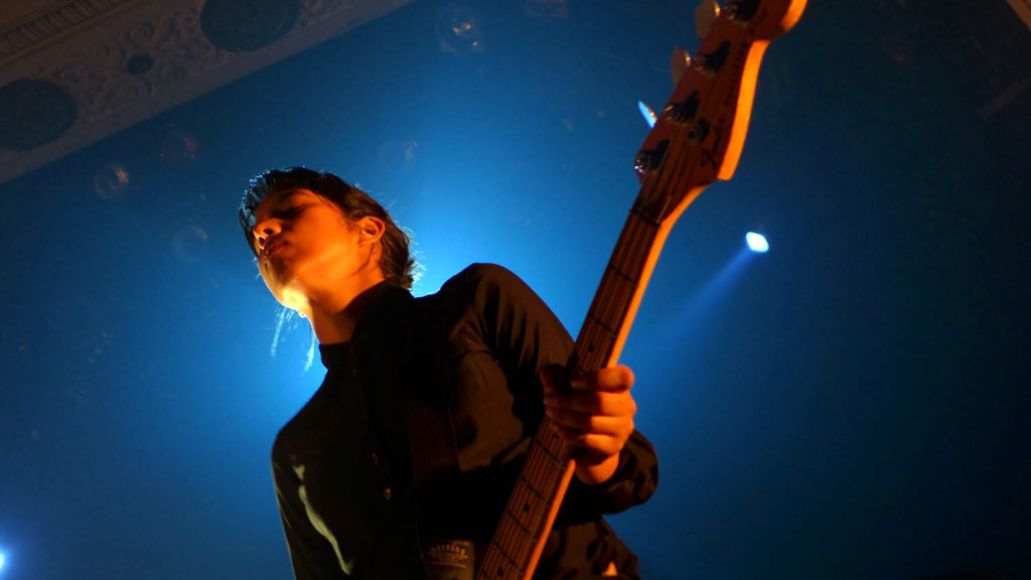 For Beth, Savages seems like an experiment in her own power. Standing at the lip of the stage during one of the band’s instrumental flurries, she couldn’t help but leak a grin as she looked out over the packed house. That volume of adoration’s an easy intoxicant, but Beth stayed in control. Her position at the helm of a band of four women equips her to play with sexuality and gender in a way that would be more difficult in a mixed-gender outfit. Maybe Savages don’t identify as feminists, but they created a feminist space at Metro last night—a space where Beth could sit with her feet dangling off the edge of the stage and, during a drawn-out rendition of “Hit Me”, describe a fetish fantasy in detail. “I want to be thrown up against the wall. I want to be smacked,” she said in her accented, actorly speech. It was half command, half plea, and she didn’t throw it out there just to titillate. Beth reaffirms that Savages makes sexual music, but the kind where women can be dominant. It’s not just sexy. It’s sex-positive.

Beth exploits the tension between the active expressions of desire often channeled by all-male rock bands and the passive expressions expected of female artists. She revels in contradiction, in the way her bright red pumps flash against her black, wide-legged slacks, in the look of her boyish crew cut above her noir-red lipstick. She’s been called androgynous, but she wears marks of masculinity and femininity together for contrast, not cohesion. Like Placebo’s Brian Molko, Beth plays with gender onstage to reformulate how gender can be used. She turned Metro into a place where it felt safe to be female—any kind. That’s where the humor comes in. “This one’s for the ladies,” Beth shouted between songs, wearing machismo like a mask to point at how ridiculous onstage machismo can really be. How many people have ever prefaced a song that’s actually for women, that’s actually about what it’s like to be a woman, with the phrase, “this one’s for the ladies”? 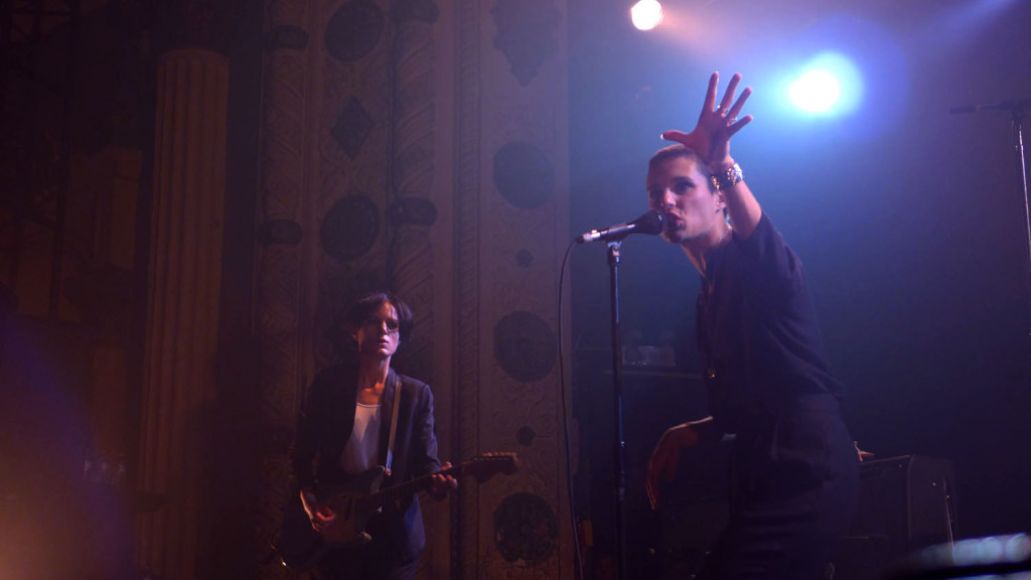 But Beth knew that she’s only one part of the phenomenon that is Savages. At the peak of the set’s closer, a roaring new song called “Fuckers”, Beth reassumed her favorite spot at the edge of the stage, away from the mic stand. She looked out at the people cheering for her and she bowed again and again. Savages wear an edge, but beneath it lies real gratitude for the people who come to share in their music. And yes, a few audience members whipped out their phones to take photos and video of the set. Beth didn’t chastise them. She didn’t even acknowledge them. The manifesto’s only a guide, it seems, not a dogma. The point of Savages isn’t to enforce a technology-free space, but to eliminate barriers between artist and audience. The message was the same whether people were recording it or not, and Beth summed it up with the last words she sang to us: “Don’t let the fuckers get you down.”

Setlist:
I Am Here
City’s Full
Shut Up
I Need Something New
Strife
Waiting for a Sign
Flying to Berlin
She Will
No Face
Hit Me
Husbands
Marshal Dear
Fuckers