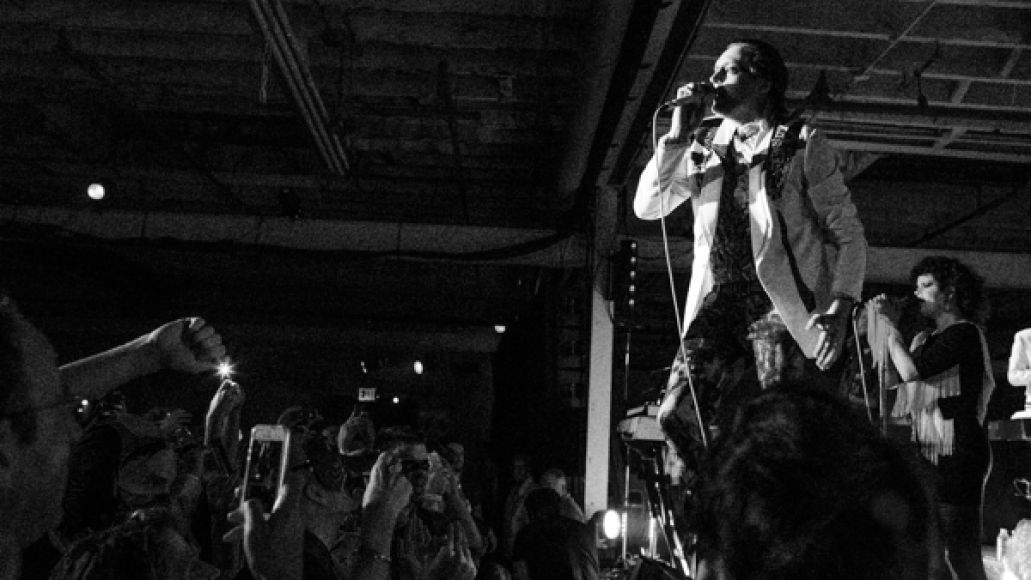 Not that you needed another visual emblem of northern Brooklyn’s gentrification from the end of the Bloomberg era, but here’s a fun one: several thousand formally attired or costumed Arcade Fire fans lining up for several blocks outside of what was until very recently an empty warehouse in far East Williamsburg. On one side of the block, lonely brick buildings announcing “Hemley Supply Co.” and “Empire Locksmith.” On the other, a delirious cluster of sailor outfits and horse heads, pinstripe suits and glittery gowns, all buzzing with anticipation.

Actually, the spectacle stretched well beyond those blocks. I was still in transit on the L — somewhere between Graham and Montrose — when I spotted a fellow passenger decked out in black, donning a crown cobbled together from twigs. To his left, a gaggle of suited hipsters. Lamely outfitted in the grey slacks and white button-down I’d worn to work, I followed them, silently, to 299 Meserole Street, where a fast-talking British face-painter shamed me into letting her dash a blue-and-red battle streak across my face. (“You’ve got great eyebrows for this look,” she promised.)

That scene well encapsulates the spirit that the Arcade Fire — performing again as The Reflektors — brought to their “secret show” last night in Brooklyn: a visceral sense of transformation and reinvention, where nothing was quite as it appeared, including the venue and its layout itself. It’s no coincidence that the Montreal outfit insisted on a costumed audience and performed only two non-new tracks, introducing them, cheekily, as covers. Nor is it anything less than fitting that David Bowie, rock’s slyest chameleon, pops up on Reflektor’s title track. As they previewed much of the material from their feverishly anticipated fourth LP, the band seemed determined to redefine the boundaries of what the Arcade Fire is or can be — and to play some shifty tricks on their audience in the process. 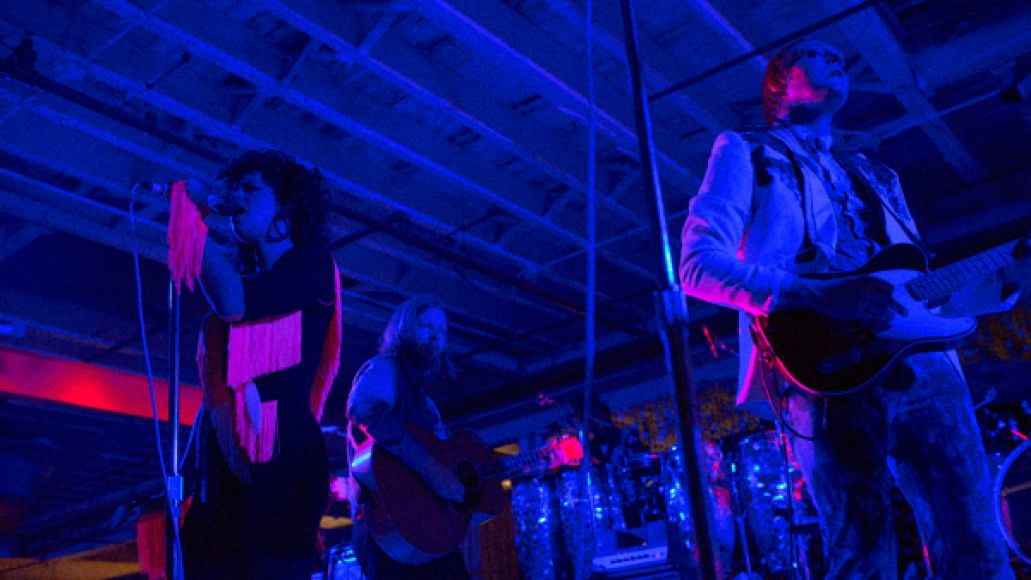 Around 8:30 p.m., a stretch limo pulled up to the warehouse and deposited the band members — we presumed — wearing novelty-sized paper-maché heads. They entered. We waited. Many had paid hundreds or even thousands to snag these tickets from scalpers. Someone hissed that Michael Cera was in attendance. Someone from Vampire Weekend, too. Near me on the press line, an older gentleman let slip that he “works for the mayor.” Several feet away, an elegantly dressed blonde guy shoveled Chinese takeout into his mouth. I shot a jealous glance at the food: it was steaming hot.

Wait: did this guy just have GrubHub deliver to the Arcade Fire Will Call line? Is that what this has come to?

I soon learned he didn’t have a ticket, but had been manning the spot since 3:30 p.m.. That is what this has come to; we’ve stopped treating the Arcade Fire like a critically-acclaimed indie act and started treated them like rock stars.

During the show, the band finally embraced the label and acted the part. 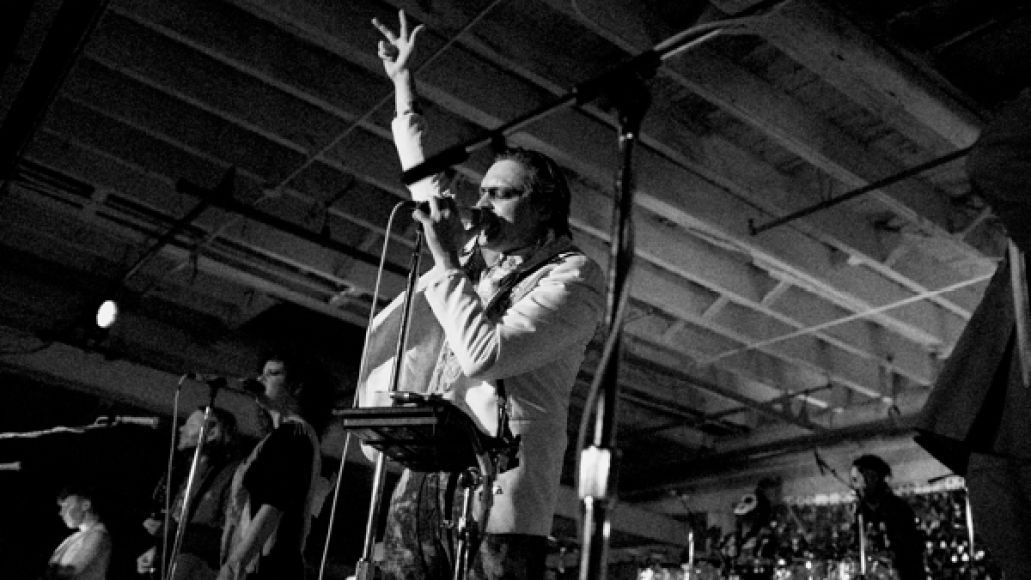 The stage was pretty small.

That’s what I noticed upon entering the technicolor ballroom. What with all the grim reaper masks and tuxedos clustering around, the place had the feel of an especially hip Bar Mitzvah (do they have those in warehouses now?) or a particularly lame secret society that involves strobe lights and confetti in its underground gatherings.

So I pushed to the front and examined the stage: just a drum set and two guitars and some amps. Not much to work with. A roadie strategically placed a few setlists and two potted plants. The Clash blared over tinny PA speakers.

When things finally got started well past the group’s 9:00 p.m. set time, it wasn’t the Arcade Fire that took the stage. It was a glum-faced James Murphy.

“There’s been a bit of a snafu, and we could only get three members,” he announced, feigning theatrical disappointment. “For now, here are The Reflektors.”

So the paper maché heads streamed out and began performing, but only static blared over the PA. Then, at the far end of the ballroom, a curtain came up: the stage was over there, and the Arcade Fire — performing as a ten-piece, with two Haitian percussionists alongside drummer Jeremy Gara — launched immediately into the disco grooves of “Reflektor”. The crowd paused in confusion for a second or two, then recognized the ruse and dashed madly to get to the real band.

“We played a trick on you. Do you forgive us?” a white-jacketed Win Butler laughed from the stage as James Murphy sneakily brushed past me in a cheetah-mask. “It’s not the last time we’ll do something that we think is funny and no one else does.” 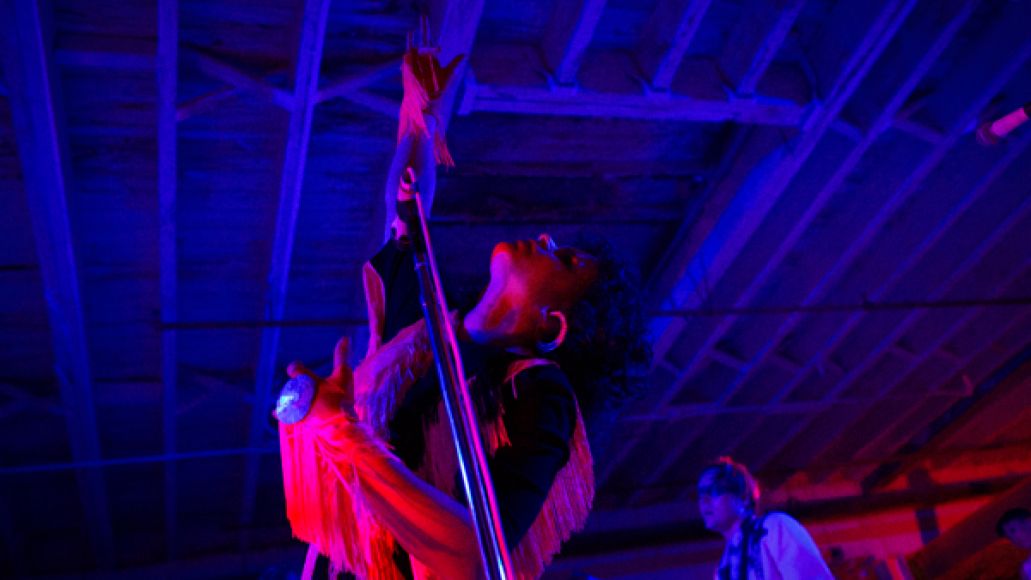 Doused in streaming blue and red light, the band performed eight Reflektor cuts over the course of an hour-long performance, boasting a full ensemble and a pulsing, hyperactive rhythm section that recalled the Talking Heads at their funkiest and most elaborate. It was thrilling to hear songs that most of the crowd hadn’t heard yet, and the material sounded invigorating, trading Funeral’s earnest swoons for a frenetic rhythmic thrust that the group has only cautiously hinted at before. “Reflektor” swelled to its dramatic peak even without Bowie pitching in at the end; the dark, surging “Normal Person” exploded in bursts of heavy, jagged guitar squalls as Butler demanded, “Am I cruel enough for you?”

Several critics have started preemptively likening Reflektor to U2’s Achtung Baby era, where the Irish outfit ditched The Joshua Tree’s fervent sincerity and embraced a flashy, irony-fused performance presence. Last night the comparison rang true (and not just because Butler, clad in blue sunglasses and slicked back hair, frankly looked a bit like Bono from afar). The swelling, heartfelt singalongs of, say, “Wake Up” and “No Cars Go” were nowhere to be found, swiftly dispatched by the polyrhythmic lurches and slick talk-singing of tracks like “Flashbulb Eyes” and “Here Comes the Night Time II”. There weren’t, of course, massive display screens or flashing text (remember: this was a Brooklyn warehouse), but the band has embraced a sense of showmanship and swagger, with Butler snarling lines like “If there’s no music in heaven, what’s it for?” and waving his arms around on the Latin-tinged latter track, at one point leaping offstage and pushing his way through the crowd with mic in hand.

Not coincidentally, the only older tracks that the band deigned to play — both near the conclusion of the set — were ones that already have disco backbeats: The Suburbs’ “Sprawl II (Mountains Beyond Mountains)” and Funeral’s Neighborhood #3 (Power Out)”. “This is a song by a Montreal band called Arcade Fire,” Butler introduced the former, keeping up the fixation with deception and disguise as Regine Chassagne took over the vocals for a welcome change of pace. The latter, though, finally transformed the grimy warehouse into the pulsing dancefloor it’d been threatening to become. “Light a candle for the kids!” people shouted from all corners. “Jesus Christ, don’t it hid!” 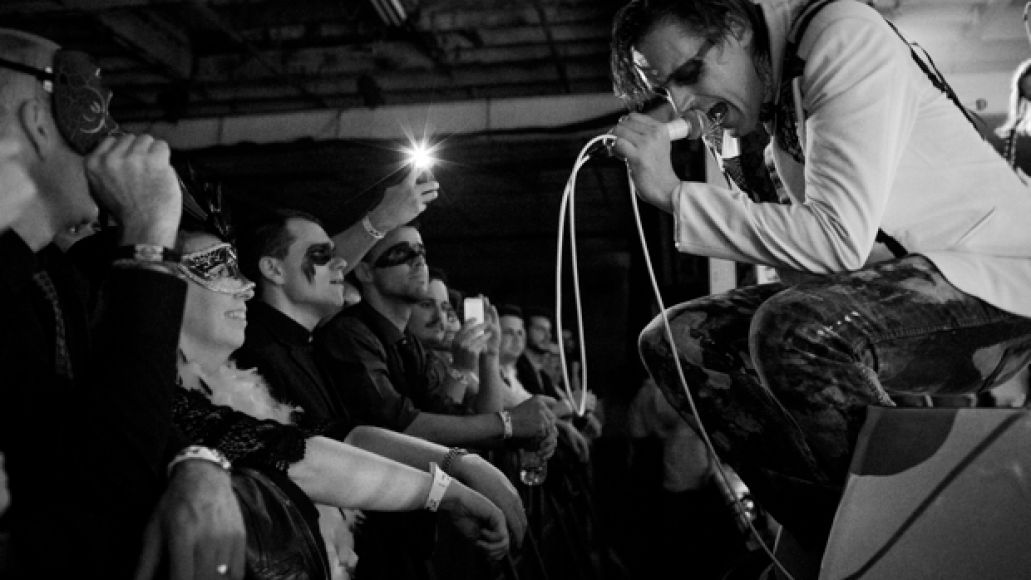 But “Power Out” proved to be the penultimate song in the set. After we spent 15 minutes waiting for an encore, Butler emerged alone in a well-worn Ramones t-shirt and sheepishly announced that there wouldn’t be any more songs; the band just wanted to have a dance party with the audience. Despite murmurs of suspicion, that turned out to be true: he eventually made his way to the side of the dummy stage and DJed in a tiger-striped mask until midnight as the group’s bongo players streamed out for a drum-off. It was a surreal conclusion to the night, but the “dance party” never matched the communal energy of “Power Out” — there were too many lone hopefuls mulling around the stage, waiting for an encore, some griping at the brevity of the band’s set after they’d paid $45 (or more) for tickets.

Which is — well, fair, I guess, if that’s what you came for. But this was never meant to be a routine, career-spanning set — it was a gathering, a multistage experience full of deceptions both obvious and shrewd, a bold transition into a new stage of the band’s career. Mostly, it felt like the sort of dreamlike costume party where anyone can show up, but no one can be let in on the itinerary.