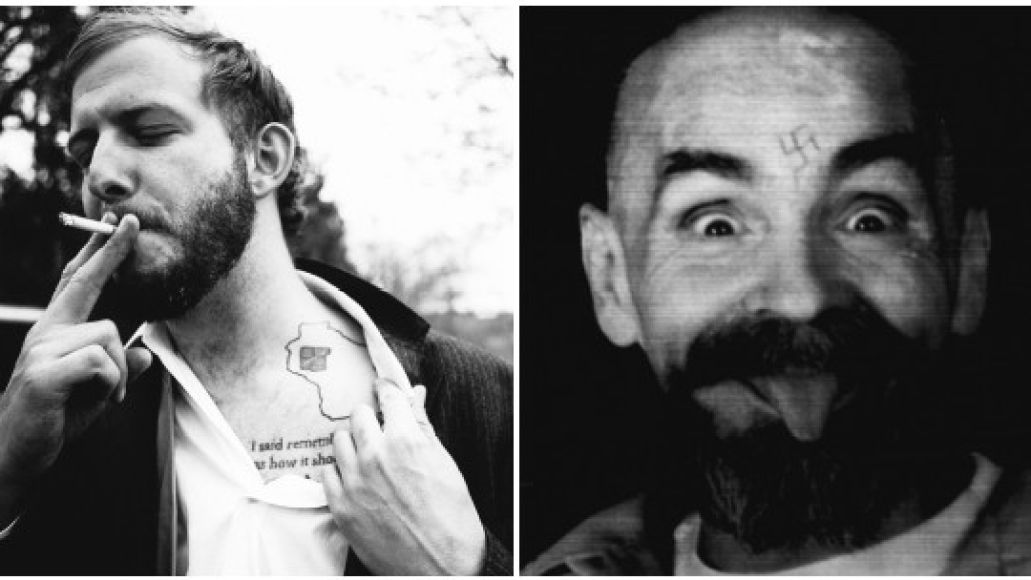 For the uninitiated/those who have never used the Internet (if that’s you, how did you get here?!), Pandora Internet Radio works on a pretty simple principle: choose an artist you like, and their algorithm will create a “station” of similar artists. For example, as the Village Voice points out, Pandora’s algorithm has determined that fans of folk act Bon Iver would probably like the songs of famed cultist Charles Manson. No, really.

Before he was a megalomaniac responsible for masterminding one of the most gruesome killing sprees in American history, Manson tried his hand at becoming a genuine ’60s folk rocker. His music was distributed on the once-dead-now-resurrected label ESP, and his recent output (yep, recent output) has been released via Magic Bullet Records. Some of those recordings, specifically a track called “People Say I’m No Good” (duh) have been popping up on Bon Iver-based Pandora stations in recent weeks.

The Voice did a bit of digging, and found Manson’s music also available on Rdio and Spotfiy, so they reached out to each streaming service. Spotify’s spokesperson Graham James stated that the company vets the music it streams, but that Manson’s work “did not raise any red flags” (though he couldn’t/wouldn’t comment on what would raise flags). Rdio’s Shana Fong admitted that the three-year-old company is simply expanding too quickly for them to vet each and every track.

Fong went on to explain how Rdio goes about acquiring songs for its streaming service. Small indie labels don’t often have the legal teams of the Sony’s and Universal’s of the world, so they frequently use third-party distributors. In the case of Manson, The Orchard is a company which owns 7.5 million song distribution rights, including those on ESP and Magic Bullet; Rdio simply picked up its offerings in one bulk purchase.

Unlike their competitors, Pandora’s manager of curation Michael Addicott claims that Manson’s inclusion on Pandora was quite intentional. “We build the collection from an inclusive point of view, considering long-term cultural and historical perspectives in addition to current popularity,” he told the Voice. “In the specific case of Charles Manson’s music, it is historically relevant and we collect music like this deliberately.”

The Voice caps off their piece by lamenting the “post-DJ” culture of online music listening, adding, “There is no DJ, just a system of soulless algorithms that rely on superficial descriptive tags and can’t tell the difference between a Grammy-winning Starbucks favorite and walking symbol of drug-addled depravity. To Pandora, they’re just two artists who have ‘mellow rock instrumentation,’ ‘folk influences,’ and ‘mild rhythmic syncopation.'” On the upside, at least Manson won’t be making any money from his songs being streamed.

See just how similar Manson and Bon Iver really are when you stream “People Say I’m No Good” and “Skinny Love” below.