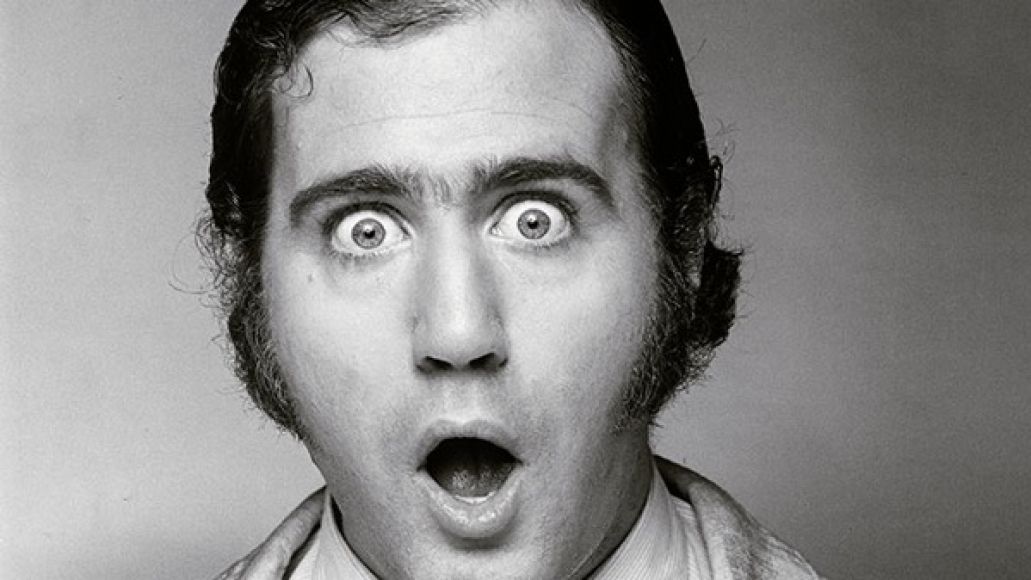 So here’s the strangest thing you’ve heard today: Andy Kaufman may be alive and well. Now, rumors about the legendary comedian having faked his death are nothing new. Despite a viewable death certificate and grave, sporadic hoaxes have often convinced people that Kaufman’s 1984 death from lung cancer was all a giant con to allow him to recede from public life and raise a family. Nothing has ever been proven, and most of the hoaxes have been exposed. But Monday night at the Andy Kaufman Awards at the Gotham Comedy Club, it wasn’t just any old schmo proclaiming Kaufman’s still breathing – it was his own brother and alleged daughter.

Update: The Smoking Gun reports an actress named Alexandra Tatarsky posed as Kaufman’s daughter. Her real father is a doctor in Manhattan. The Smoking Gun adds that Kaufman’s brother, Michael, met Tatarsky earlier this year at a Manhattan gallery exhibiting Andy’s memorabilia, and recruited her for the stunt. Neither Michael Kaufman nor Tatarsky have responded to media requests for comment.

Update #2: In an interview with CNN, Michael Kaufman admired he now believes this to be a hoax, but disputed claims that he was in on it. Michael told CNN that he had never met the woman prior to Monday night.

Reports from The Gothamist and The Hollywood Reporter state that Michael Kaufman, Andy’s real brother, relayed a story to the Gotham crowd about discovering his brother’s elaborate plans to fake his own death, along with a note telling Michael to meet Andy on Christmas Eve 1999 at a specific restaurant. Michael says that while Andy never showed, a stranger gave him a typed letter apparently from a living Andy.

Michael read the note to the audience, revealing that his brother “just wanted to get away from being Andy Kaufman,” and had married a woman with whom he was raising a girl. A Facebook post from someone in the crowd that night recounts that Andy wanted his secret to remain hidden while the Kaufmans’ father, Stanley, was still alive. Well, Stanley died this summer, and that’s when a woman claiming to be Andy’s 24-year-old daughter contacted Michael.

He invited his apparent niece to accompany him to the Awards, and she agreed. That’s how she came to be at the Gotham Comedy Club, where she sheepishly walked onto the stage and talked about her father. She said he has been watching the Awards for years via YouTube, and that he spends his days taking care of his children (yep, plural) and handling paperwork for his wife’s business. She also remarked that he had seriously considered making his reappearance at the Gotham Club that night, but had decided against it. TMZ got their hands on video of the majority of the mystery girl’s appearance, and you can watch it below.

Normally we’d take this kind of thing with a grain of salt, but it’s his own brother we’re talking about. So the question is, which is the hoax: the death, or the death hoax? If this all turns out to be true, we surely haven’t heard the end of this, so stay tuned.