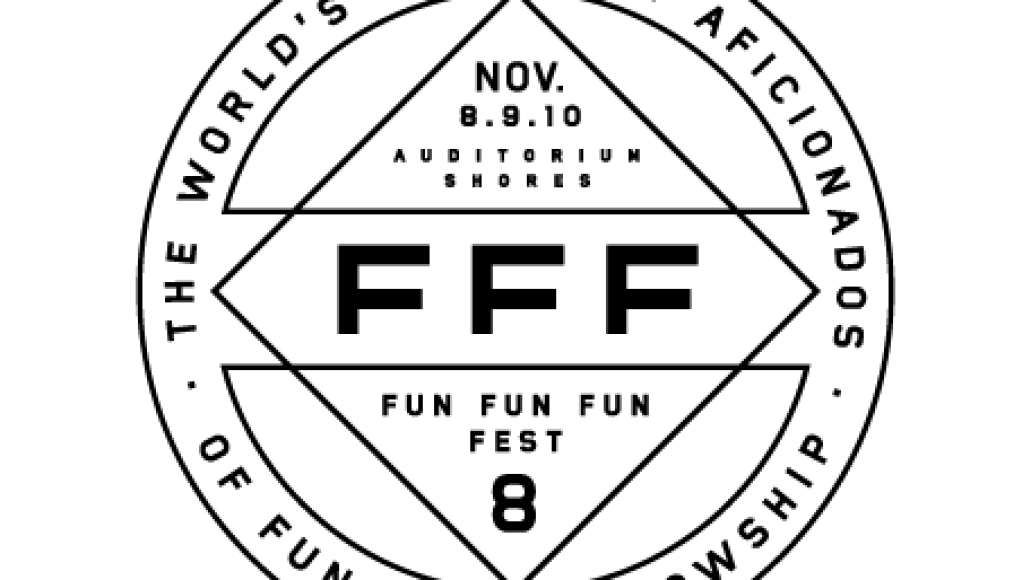 Fun Fun Fun Fest may be the first festival I’ve been to that felt curated in a generationally appropriate way for its audience. All the cultural reference points– musically, with rock, rap and electronic music and non-musically, with absurd t-shirt guns shooting tacos, pro wrestling, extreme sports, raunchy comedy– felt a lot more fitting than what festival organizers two to three times the age of its average attendee offer up.

FFF is digitally connected– offering mobile chargers for its attendees smartphones and a promptly updated mobile application– and humored, sending out goofy push notifications and other social media missives with a distinctly tongue-in-cheek voice. All it needs is more meme references, YouTube personalities and big-time EDM festival draws and it’ll be right in line with teens coming of festival-going age. 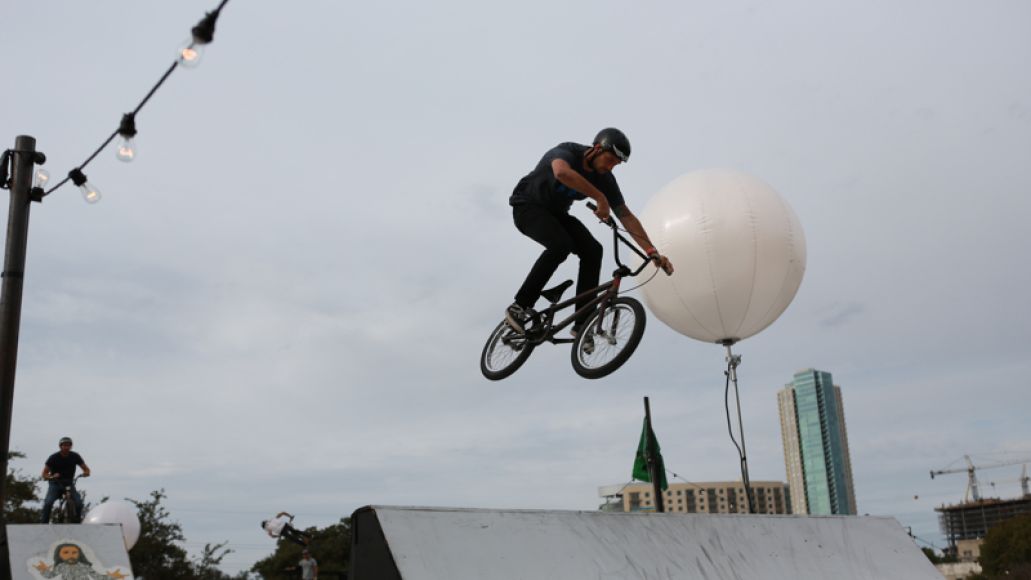 Of course, what’s beautiful about FFF is that it’s never just one thing. Its diversity is almost unparalleled next to any comparable festival. It’s all things to all people: reunions and comebacks of legacy acts (Ice-T and Body Count, Television, Kathleen Hanna’s The Julie Ruin, Sparks and more, detailed here), those with rising legacies (Deerhunter, Cut Copy, Thee Oh Sees, also detailed here) and local Austin acts, just to name three niches FFF caters to.

We here at Consequence of Sound did our best to delve into each and every one we could find at Auditorium Shores this past weekend. It was a doozy. Check it out. 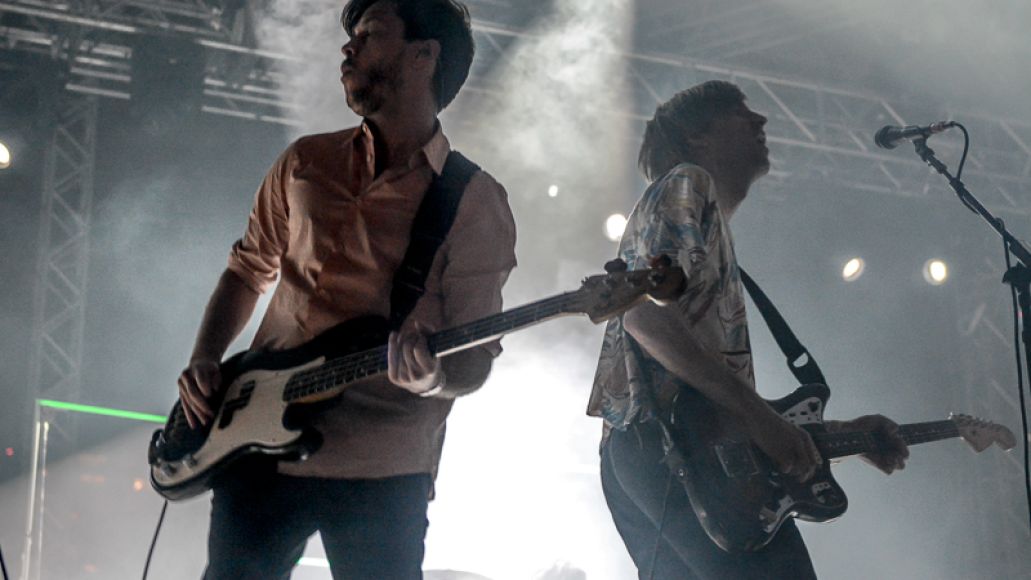 And so has Cut Copy: The Australian quartet has gone from Bright Like Neon Love’s Beach Boys and doo-wop vocal harmony inflections, the New Order-like, four-on-the-floor dancefloor anthems of In Ghost Colours, tribal-percussion affectations of Zonoscope, and now the trippy psychedelic vibes of Free Your Mind. Basically of all of these modes were touched upon in Cut Copy’s setlist: “Free Your Mind”, “Where I’m Going” and “So Haunted”. “Hearts on Fire” got the kind of crowd reaction “Blue Monday” gets.

So is the band ready for the big time? Cut Copy’s synth-pop anthems have been ready for a big star turn since 2008! It’s not a matter of if, but when. Whether it’s the band’s current Free Your Mind album cycle that jumpstarts it or it comes soon– whenever it happens– Muse’s, The Killers’, Depeche Mode’s, even New Order’s festival slots are not safe. 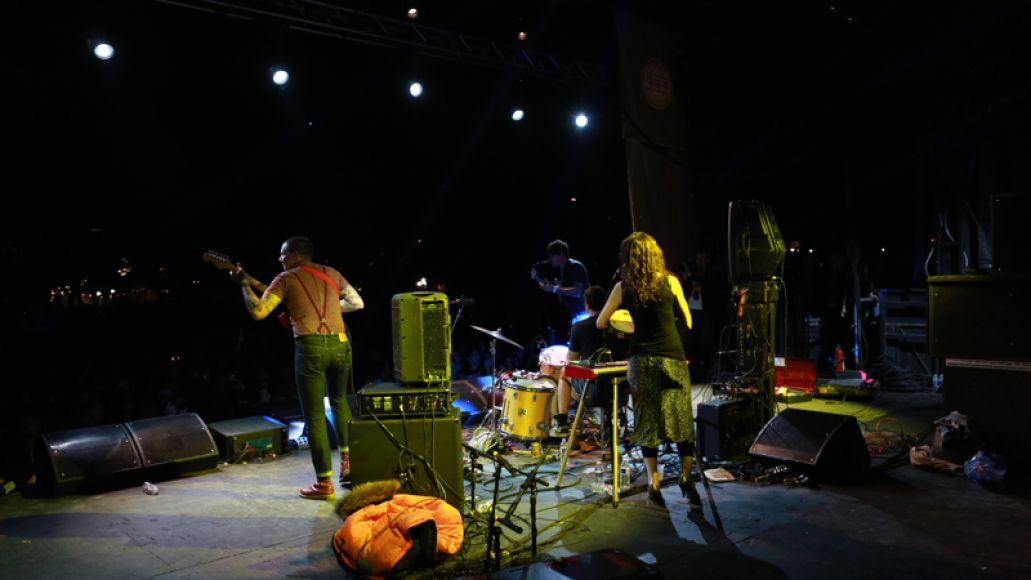 Two of the most energetic sets of the weekend came from San Francisco’s Thee Oh Sees, which ripped apart the Black Stage Friday night before playing to a capacity crowd at local dive Beerland for their Nites show. The former was a 45-minute onslaught of guitar shredding, frontman John Dwyer’s indistinguishable yelps, and copious stagediving (even fellow indie rocker Mac DeMarco got involved, rushing from the side of the stage and hurling himself into the pit). The massive venue allowed Dwyer to experiment freely with his many fuzz pedals and noise-making devices, whereas the Beerland set was crammed asshole-to-elbow. Heck, the place was so crowded that the band couldn’t even set up its equipment on stage; they placed their amps next to the bar and played right in the middle of the crowd.

Best Performer Not Wearing Any Pants 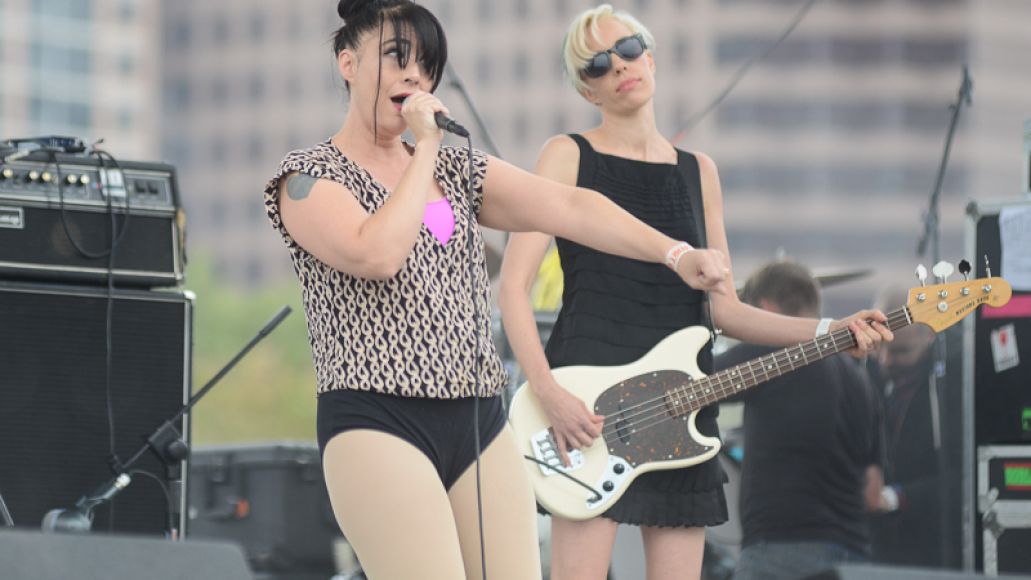 Kathleen Hanna (of The Julie Ruin)

Uh… okay: “Most women in music aren’t wearing pants,” Hanna said in her leopard-print leotard and white tights, as if ready for a ballet class on Sunday afternoon. “If you can’t beat ‘em, join ‘em.” It was an apt reflection of Hanna’s thoughtful, goofy feminism. “Friendship Station”, a song from her previous project Le Tigre, repeats the refrain “I’m gonna let it be alright,” which is what Hanna not wearing pants seemed to embody. Like, fuck it, let’s roll.

So did Kathleen Hanna get political? Not specifically. Planned Parenthood was on site that day and Hanna didn’t shout out Wendy Davis or anything. She did shout out all the “young feminists” in the crowd and introduced The Julie Ruin song “Girls Like Us” saying, “There are as many different kinds of feminism as there are women.”

So she’s not all angry? Nah, she’s just funny, sarcastic and outspoken. Also, Hanna doesn’t ham it up for or pander to a crowd. Really, she seems to want you to dance to something with a message, hence a song like “Lookout”. For contrast, the band’s performance of “Eau d’Bedroom Dancing” was a sincere, clear-eyed ballad that hewed closer to sentimental shoegaze than danceable punk.

Most Likely to Piss Off the Police…Still 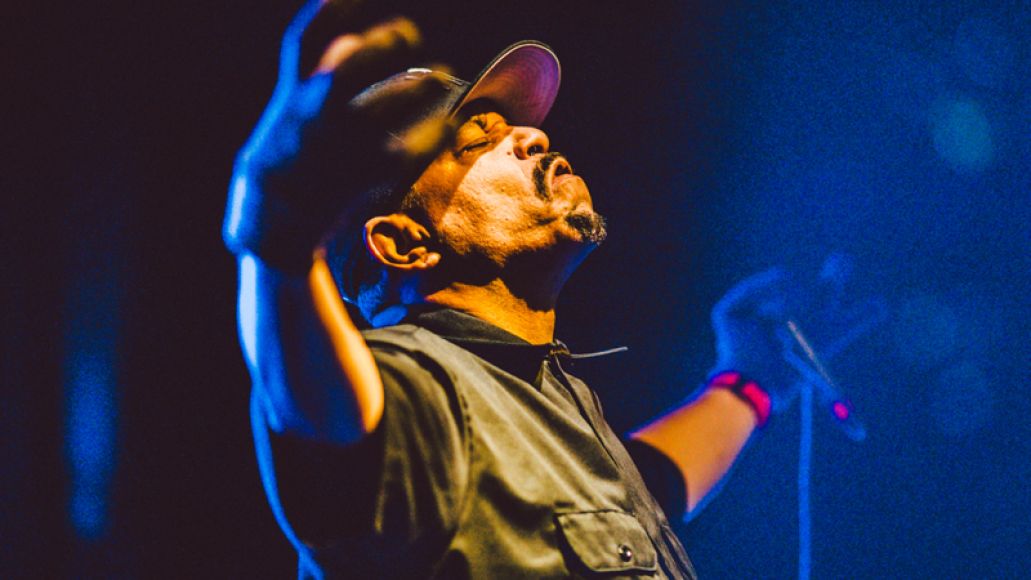 “You know I love Austin,” shouted Ice T. “Just not the pussy ass cops.” The Austin P.D. patrolling the Black Stage area were not amused by Body Count’s Saturday night set, but everybody else was loving it, shouting along to every chorus as the band played most of its 1992 self-titled debut. A surprise cover of Suicidal Tendencies’ “Institutionalized” sent the mosh pit into a dangerous frenzy, but nothing could match Body Count’s finale: “Cop Killer” with a guest appearance by Bushwick Bill — a living legend in Texas. Ice T’s wife, CoCo, also made a cameo on stage and received a equally wild ovation. 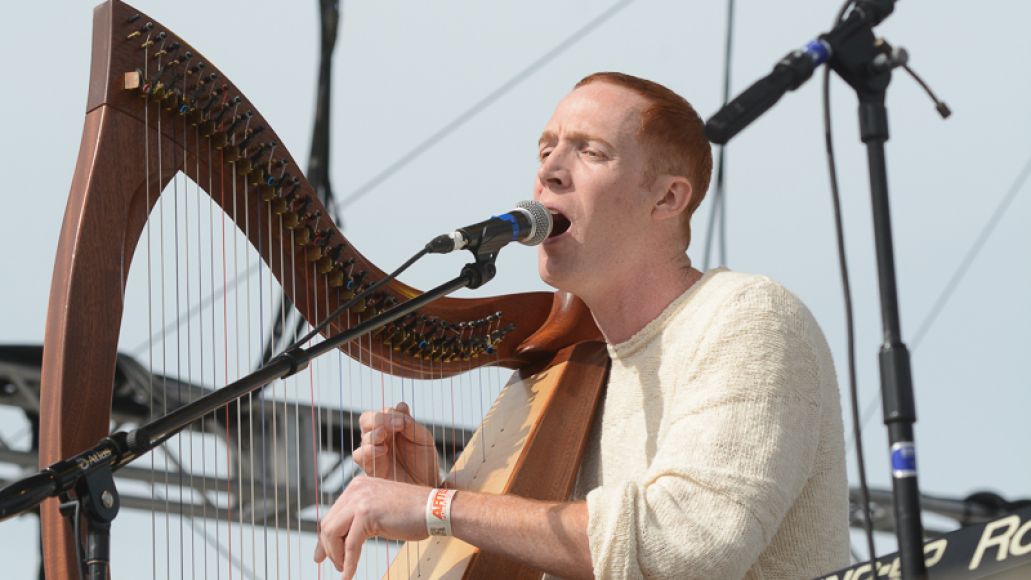 Prince? Is that you? Hello Pat Grossi, also known as Active Child. I am Prince. I am sexy. I was told U R very funky N also sexy so I arrived especially early in my Purple Chariot to Fun Fun Fest on Friday afternoon 2 C U. I was very pleased with U.

What do you like so much about Active Child, Prince? I think harps R very sensual instruments. Harps R not very funky but they R sexy. I play many instruments but I do not play the harp. After seeing Active Child play, I bought a custom purple harp N now I am learning to play the harp. Soon I will learn 2 play on a cloud like a purple angel.

What are your favorite songs of his, Prince? His first song, “Johnny Belinda” sounded like funky choirboys gettin’ it on. His vocal flow on “Playing House” reminds me of some of my ’90s R&B music.

Anything else you’d like to add, Prince? No. Good day. I am Prince. 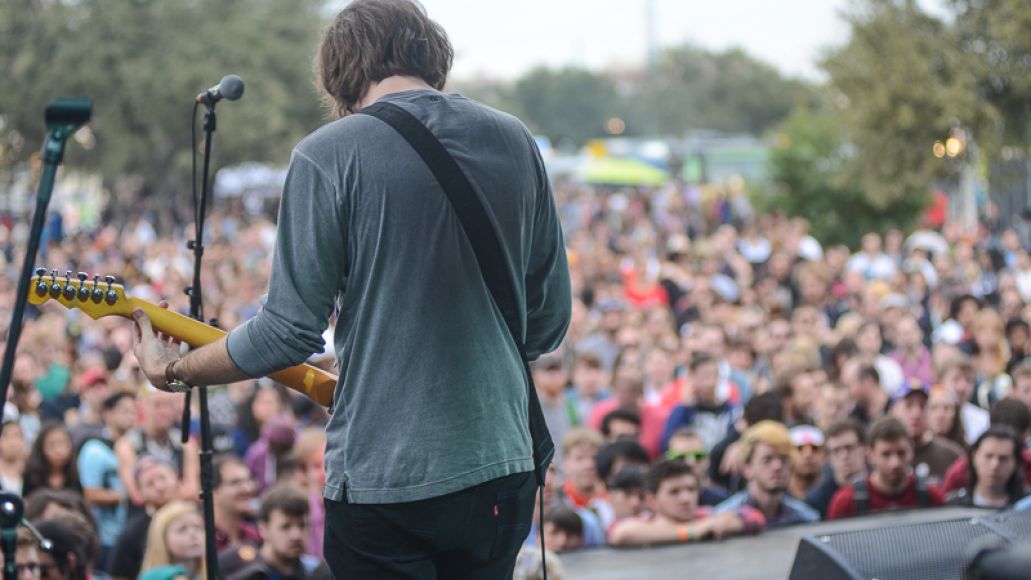 Because Cloud Nothings haven’t been touring, their set at Fun Fun Fun was one of the first chances to hear the band’s as-yet-untitled new songs (the follow up to Attack on Memory is expected to drop sometime next year). Compared to tracks like “Stay Useless” and “Fall In”, the new stuff was fast, relentless, and almost void of melody. Dylan Baldi’s voice was smothered by guitar feedback and the blast beats of drummer Jayson Gerycz, who terrorized his kit for the duration of the set. A lifeless midday crowd didn’t really know how to react, but to the side of the stage, Bob Mould (who performed a DJ set on Friday) looked on with a smile of approval. The punk-rock torch had officially been passed, and Cloud Nothings were carrying it with passion. 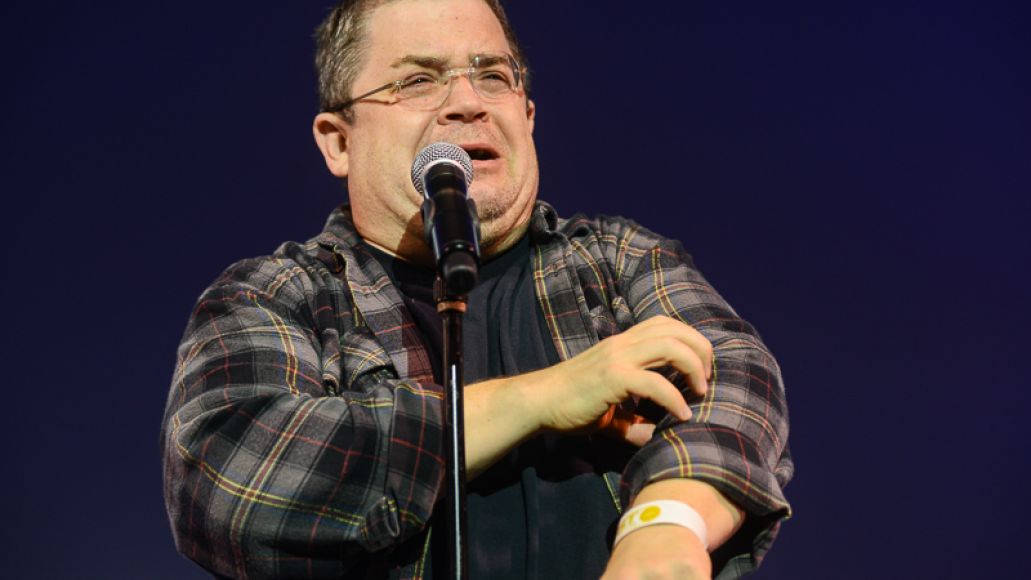 It’s an inevitability at basically every festival with music and spoken word/comedy. The music wafts over into the specially appointed area for stand-up acts and the comic is, at best, mildly annoyed. But not Patton Oswalt. Oswalt turned the negative of rock ‘n’ roll noise pollution into a hilarious positive. Here’s some choice bits:

Upon hearing the spurts of feedback from Kurt Vile’s set about to start up: “Holy shit, that could be a ventriloquist act. ‘It’s Patton and Feedback!’ Hey feedback, ain’t it great to be in Austin?” He makes a feedback noise. “All right, sorry! I think it’s really fun here!” He makes a different feedback noise. Accuses the feedback of saying something racist.

Oswalt derped it up over Vile’s first song, singing, “Backpack full of quinoa/I’m skateboarding down to the vegan store.” When Oswalt found out he was making fun of Vile, however, he stopped the mockery in its tracks. “Oh, fuck. I like Kurt Vile… He must be standing in a wading pool of soy milk or something.” 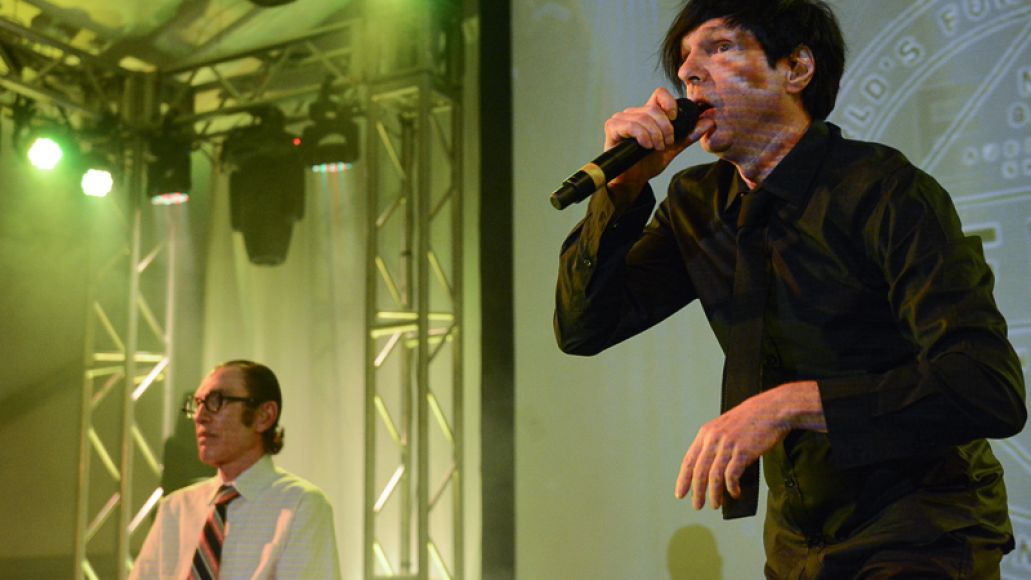 The decision to put Sparks under the Yellow Tent was wise. Unlike the stages, this tent — despite the stuffy heat — allowed for an intimacy between artist and audience. And for a duo like Sparks, which is so reliant on the words and messages in its music, this venue proved apt. With a scowl on his face, Ron Mael sat at his keyboard and didn’t say a word as his brother, singer Russell Mael, darted around the tiny stage, hurling his falsetto in every direction.

The setlist grabbed from their whole (massive) discography, but all of it was sparsed down to just keys and vocals. This gave the songs a spooky showtunes vibe, and the lack of sonic distractions meant that the audience was locked into Russell’s every word. It didn’t work for everybody — about half the initial audience had left by the end — but those who stayed were treated to an idiosyncratic, affecting performance. I even heard a few exclaim that it was the best thing they’d seen all weekend. 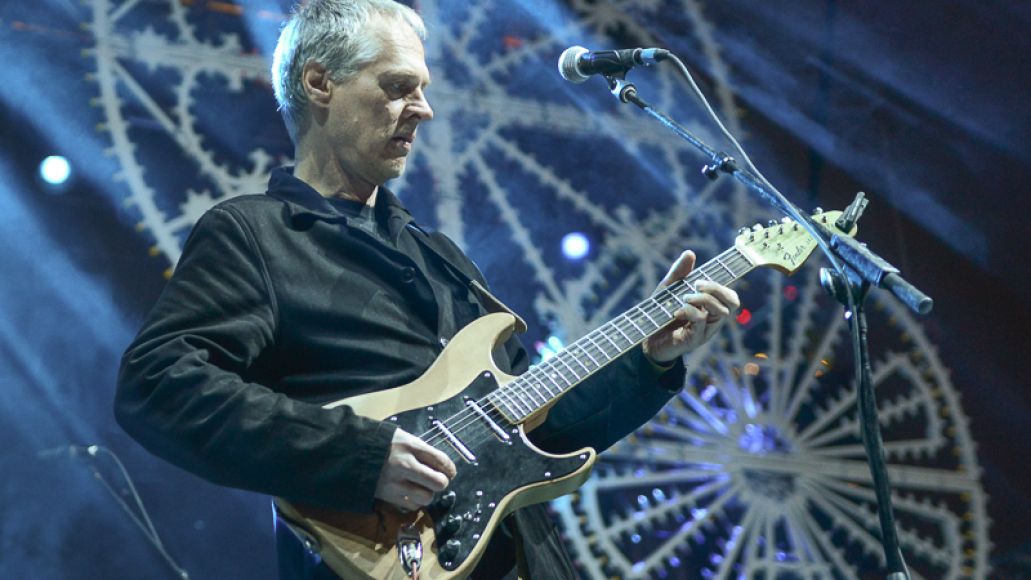 Where the hell’s Television been? I thought they were long gone: Well, the CBGB-era band got back together in 1992 after a 14-year hiatus. In 2007, founding member Richard Lloyd left the group amicably, leaving Tom Verlaine as its defacto leader. With renowned session guitarist Jimmy Rip taking Lloyd’s place, Television has dusted off its live gear for a serious tour this year (most of it outside the U.S.). Fun Fun Fun Fest was one of its few stateside dates this year.

So do the music still hold up? Absolutely. Verlaine, Billy Ficca and Fred Smith– who started playing together as Television in 1975 and haven’t toured very much in the last few years– sound not the least bit out of practice. Verlaine’s guitar phrasing sounded so crisp and precise on Saturday night. The guitar solo on “1880 or So” sounded like something Jerry Garcia or Peter Buck would play in their primes. The long instrumental passages of parts one and two of Marquee Moon finale “Little Johnny Jewel” were gorgeous corridors of guitar work. The guitars of the Marquee Moon title track bent and twisted for over 10 minutes.

How do they compare to bands today? Way better than most bands today. But considering how long it’s been since Television put out a record, it’s tricky. Compare them to Deerhunter, the band that followed them Saturday night on the Fun Fun Fun Fest Orange Stage, and the band’s music seems tame, even understated. Deerhunter’s jam on “Nothing Ever Happened to Me” rivaled, if not surpassed, anything Television improvised. Also, as reverent as Bradford Cox was over following Television, his band had a slightly bigger turnout. Not to say it’s right, but at some point the torch has to be passed. And the kids, they’re coming up from behind. 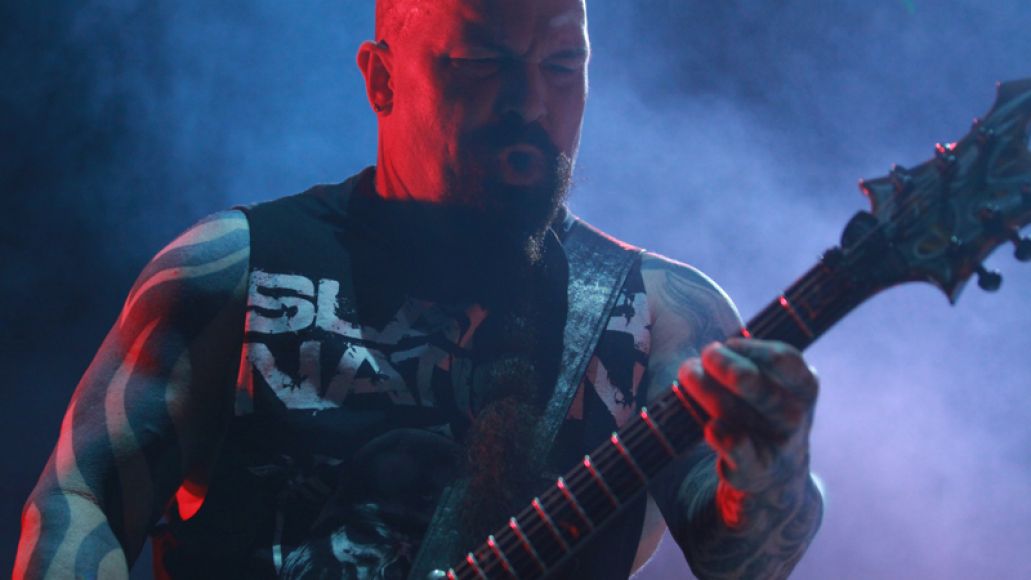 The lights dimmed. Inverted crosses were raised. Slayer appeared, and a crowd of thousands hoisted the devil horns in unison. Austin was about to get evil…

“Hell Awaits” and “The Antichrist” opened what would be a legacy set for the thrash metal gods: Almost every song was culled from the band’s first five albums. A bearded Tom Araya — always the appreciative showman — kindly thanked festivalgoers for their support and treated them to such classics as “Seasons in the Abyss”, “South of Heaven”, and, of course, “Raining Blood”. As a longtime fan who had never seen Slayer, this “old-school” set (which the band’s been playing all tour) will go down as one of my all-time favorite concert memories.

I slam danced, shouted lyrics in chorus with my fellow fans, and watched in awe as Kerry King melted faces with his world-class solos. For the closer, “Angel of Death”, a massive tribute banner to Jeff Hanneman was raised behind the stage. Hanneman’s replacement, Exodus guitarist Gary Holt, initiated the tremolo picking, and Araya let out the hysterical falsetto scream we’d all been waiting for. It echoed through our skulls; the double bass rattling our innards. On some throne in hell, Jeff was smiling a toothy grin.