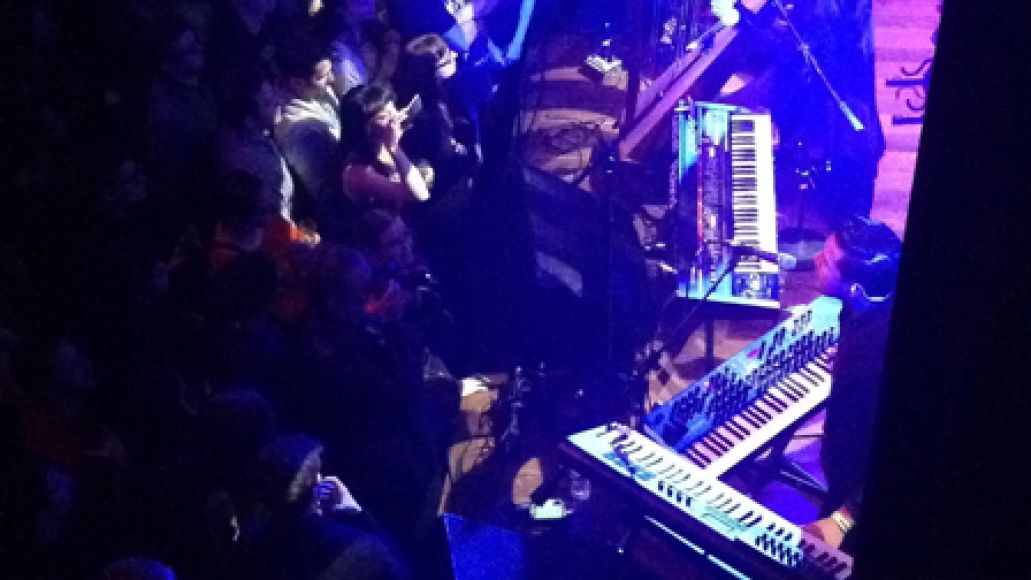 For Pat Grossi’s choral, harp-assisted R&B to live up to such perplexing genre descriptions, you might expect him to stick out in other ways. Born to a music-industry father who casually introduced him to rap at a young age, he spent years in the Philadelphia Boys Choir until their move to Los Angeles, where he’d lay ears-to-speaker in the house, concerning an overreactive family member that his fascination with sound was so intense, she suggested to his mother that he might be deaf.

Recording and releasing in Denver as Active Child with 2010’s Curtis Lane EP, the lanky redhead now towers over the harp and Roland Juno-60 synth for his Rapor EP support tour, backed by an eight-member choir and string ensemble, moving and belting like he’s harmonizing with himself in the living room. Dressed in a long sweater resembling a hospital robe, the audience warmed up with the blue and magenta light of Chicago’s Lincoln Hall after opener JMSN made way for a setup starting with his four-piece and ending 20 minutes later with the pedal board eclipsed by music stands and risers more reminiscent of church Sundays or Jimmy Kimmel Live! takes.

The old-school speech-level lows and hollow reediness of Grossi’s upper register recreated the sincerity of earlier tracks “Hanging On” and “You Are All I See”, losing the bare production in the latter half of the 45-minute set for arrangements spread over countless spare parts. The cuts off Rapor swell too much live, forgoing the bass production on earlier releases and using enough progressions, chorists, and instrumentalists to score the climax of a mainstream movie trailer. The live balance of sound on Rapor‘s tracks especially drew on misguided cinematic pop values, the harmonizations and embellishments of all eight choir members usually overshadowed and drowned out by the central band until the encore, meant to cap off the new material and what it can do to flesh out the new album’s grand imaginings. Moments from the new release, like the lower three voices on “She Cut Me” at the encore benefitted from mimicry of MIDI-style choral pipes, eluding to the overarching stylistic shift away from Casio-type R&B synth melodies written for human voice.

Ironically, without the eyes-closed presence of Grossi, delivering his own layered vocals and shifting rhythms in the length of the harp, the stage production live would seem insincere on another musician. He sings as if it drains him. Between-take noise never moved on from complete, awed silence to shouts of “I love you!” until “I love you, too” was recapitulated by Grossi: “I do love you, I really do; I just don’t know you, really!” When an audience member growled, “You have a beautiful voice man,” he responded sheepishly with an overly-humble “thank you.” With that kind of polite, direct exchange and humility about the constant natural gift of his pure songwriting and voice, I hope he gets that everything else about the show is ornamentation and literally falls away under all the Trans-Siberian Orchestra lights.

Setlist:
You Are All I See
Johnny Belinda
Evening Ceremony
High Priestess
Hanging On
Calling In the Name of Love
Feeling is Gone
Playing House
Subtle
She Cut Me
Silhouette