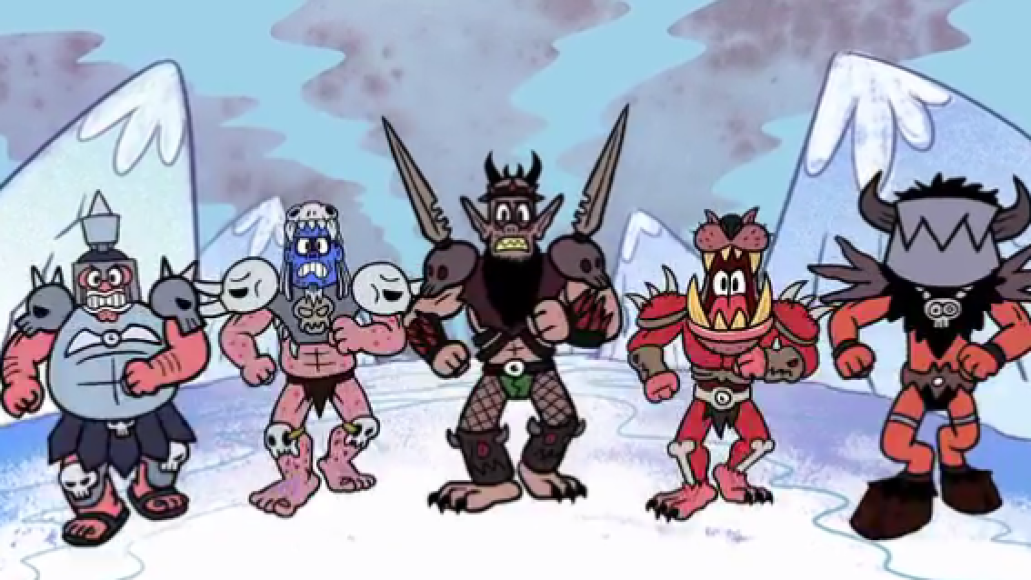 Before you put the kiddies to bed with GWAR frontman Oderus Urungus’ soothing read-through of Goodnight Moon, keep the sticky lil’ demons pacified with the band’s new cartoon. Drawn and directed by cartoonists Myke Chilian (China, IL) and Tommy Meehan (Cartoon Network), in association with Funny or Die, The Animated Tales Of GWAR features voices from each band member in addition to guest star “Weird” Al Yankovic. According to Chilian, the “GWARtoon” sees Urungus “lose his murderous-mojo, prompting the rest of the band to embark on an Antarctic quest for the cure.”

The wacky, wholly unsettling adventure that ensues features (deep breath) slug murder, smashed dolphins, a full minute of proctology humor, pick-axes to the face, two kinds of toilet jokes, a zombie T. Rex, Silence of the Lambs-esque face-wearing, and instruments made from dismembered children. It’s kind of like Scooby Doo meets Thundercats, if both shows were geared toward cannibal demons and not eight-year-olds and/or stoners. Grab a big bowl of Honey Smacks and watch it below.

“I hate cartoons…cartoons are for kids, and kids are strictly for eating,” Urungus said in a press release. “But I just might have to back up a little and say that this is the greatest cartoon ever, even if I still hate it, just because it’s about US.”

Stop what you're doing and watch GWAR's cartoon right now