Darwin Day is celebrated each February 12th in honor of the birthday of the legendary author of On the Origin of Species. Largely considered the father of evolutionary theory, Charles Darwin suggested a process of natural selection in terms of animal and plant species, his theory explaining (for example) how many wildly different species of bird could have grown from the same root.

With that in mind, we thought we’d take a look at some unexpected evolutions in the music world, whether that’s from one musical style or persona to another (think the difference between the Finches on the Galapagos), or from music to another effort entirely (maybe the jump from tortoise to giraffe). We’ve come up with 10 unexpected musical evolutions to help you commemorate Darwin Day, including a pop star turned politician and a punk hero turned biochemist. 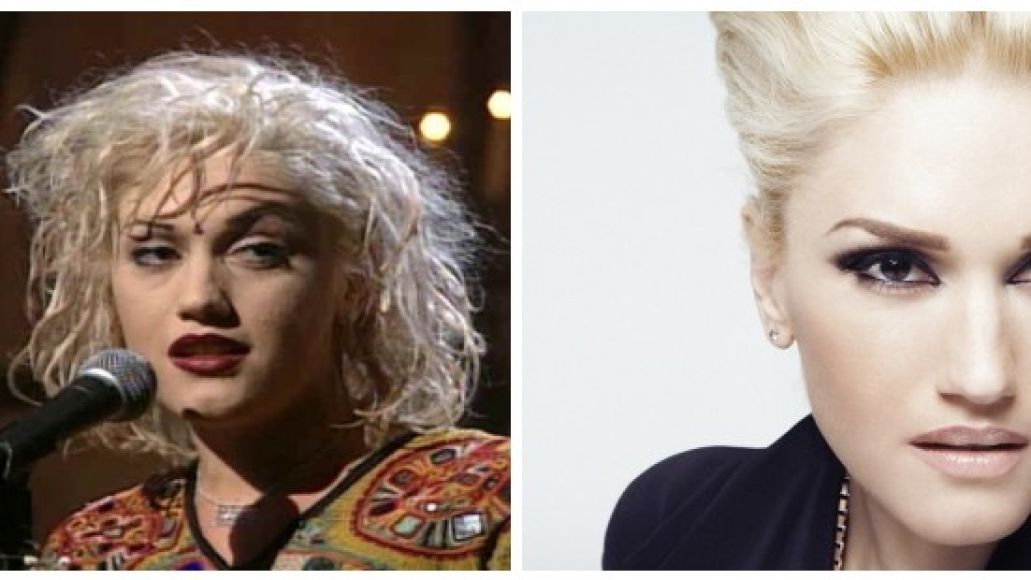 Charismatic chanteuse and No Doubt co-founder Gwen Stefani unfurled from lovesick ska queen to a confident j-pop superstar, mom, and fashion designer. Heavily influenced by her brother’s ska favorites as a teenager in California, Stefani joined No Doubt in 1987 and went on to massive critical and mainstream success throughout the ’90s, the band itself shifting from a bouncy ska act to sultry New Wave group. Stefani’s other musical sensibilities began to emerge in the early 2000s, when she collaborated with Moby on “Southside” and rapper Eve on “Let Me Blow Your Mind”. Then came her smash hit Love.Angel.Music.Baby in 2004, the Harajuku Girl-strutting, bubblegum-surged record that catapulted her into pop stardom. Since then she has begun a designer label (L.A.M.B.), married Bush frontman Gavin Rossdale, and is a mother to two (soon to be three) children. –Paula Mejia 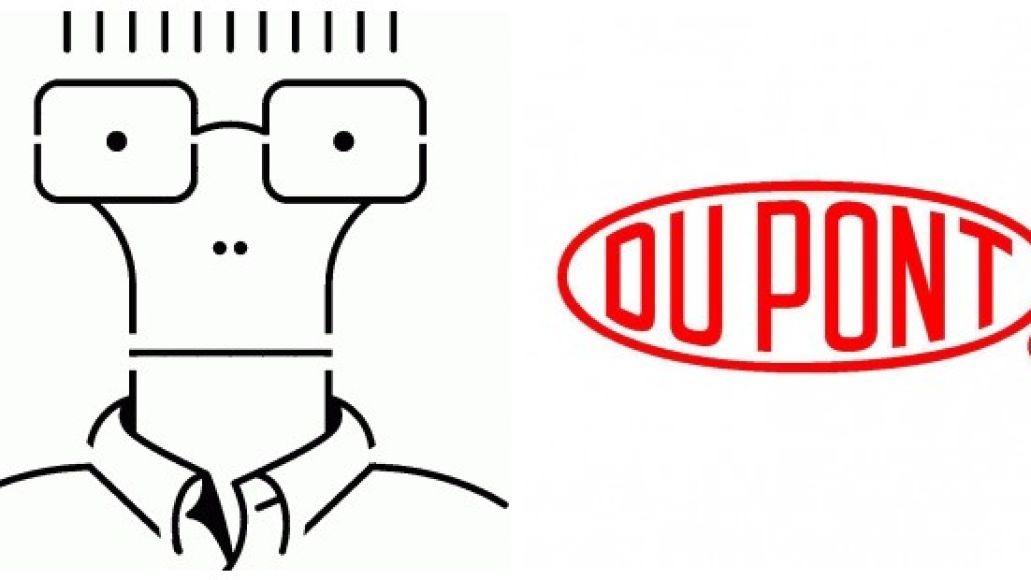 While it was apparent from the title and album cover of the debut album from punk legends Descendents, Milo Goes To College, the depths of vocalist Milo Aukerman’s nerdiness ran far deeper than many would expect, and incredibly far afield from the average punk frontman. The drawing of the skinny-necked dude in the starched shirt, tie, and glasses is supposed to be him, and he did leave the band after that record to attend UC San Diego. But this isn’t a simple case of a punk growing out of it: on breaks from his science education, he’d return replete with lyrics pushed by an eccentric, highly specific, decidedly anti-rock star persona. Punk and institutional education don’t often go hand in hand, but Aukerman managed both, going on to work on five more albums with the Descendents and receive a PhD in biology. Recently, Aukerman’s been working as a plant researcher for DuPont, but he’s also still that rebellious, nerdy punk hero whenever the Descendents get the itch to hit the stage. –Adam Kivel 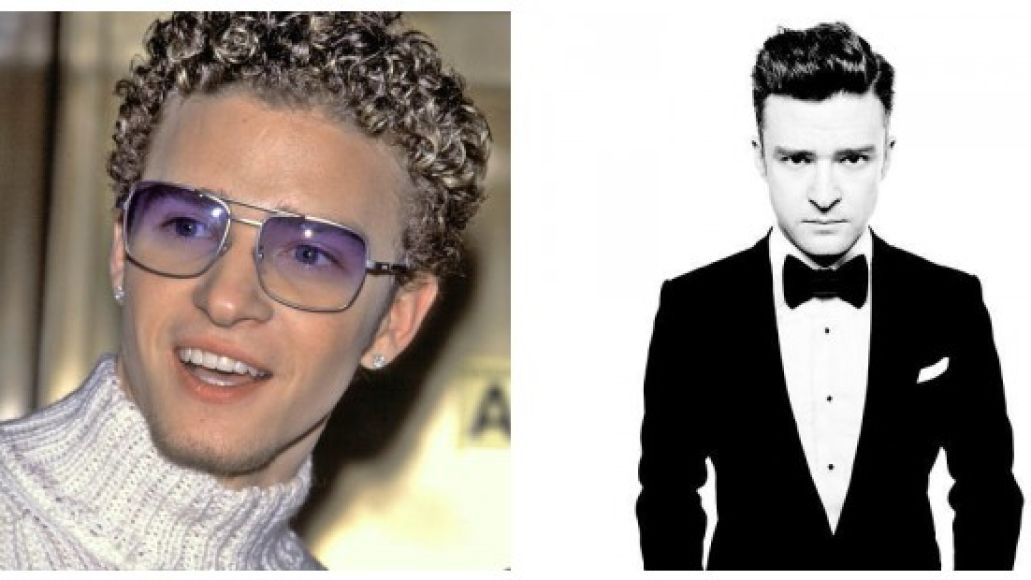 I distinctly remember being eight years old — toothy, impressionable — and running out to Best Buy with the intention of snagging *NSYNC’s No Strings Attached upon release day. Oh, the hits were there, “Bye Bye Bye” and “Space Cowboy (Yippie-Yi-Yay)” among them. But there in the center, former Mouseketeer and heartthrob Justin Timberlake posed, his glorious, blond crunch-curls the archetype of new-millenium uber-cool. I’d never thought then that Timberlake would grow to be, by 2014, an entrepreneur, a pioneer, a movie star expertly portraying Napster’s Sean Parker in David Fincher’s The Social Network, a handsome dude bringing sexy back, and an all-around cool guy posing for selfies with McDonald’s employees. It’s a career arc that he’s expertly maneuvered since the days of the boy band extravaganza, becoming a jack-of-all trades superstar in the process. –Paula Mejia 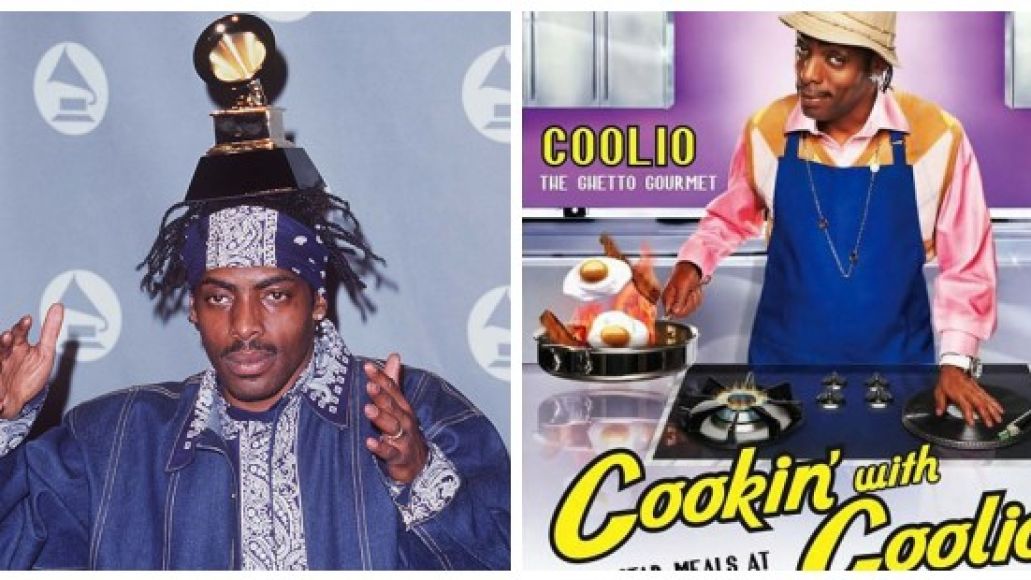 “This dish ain’t just called Karate Meat because it’s got an Asian kick to it. It’s called Karate Meat because it will beat you up like a pigeon in prison.” Sure, he may have won a Grammy for “Gangsta’s Paradise” (still one of the best-selling rap singles of all time), but Coolio has since decided that he’d rather be known as “the ghetto Martha Stewart, the black Rachel Ray.” Though he’s put out new albums fairly regularly since that 1995 smash, he’s spent recent years focusing on becoming a celebrity chef. In fact, the author of Cookin’ With Coolio: 5 Star Meals at a 1 Star Price decided last year to auction off the rights to his musical back catalog in order to fund a second cookbook and a Web-based cooking show. So, when you’re learning from “pimp” Coolio how to make “blasian” Soul Rolls (“You can use ground alligator, I don’t give a damn!”) while a barely-there woman in outlandish costume asks if the Soul Rolls are rolled “like a blunt,” just remember: the allowance money you forked over for the “Gangsta’s Paradise” cassingle went to good use. –Adam Kivel 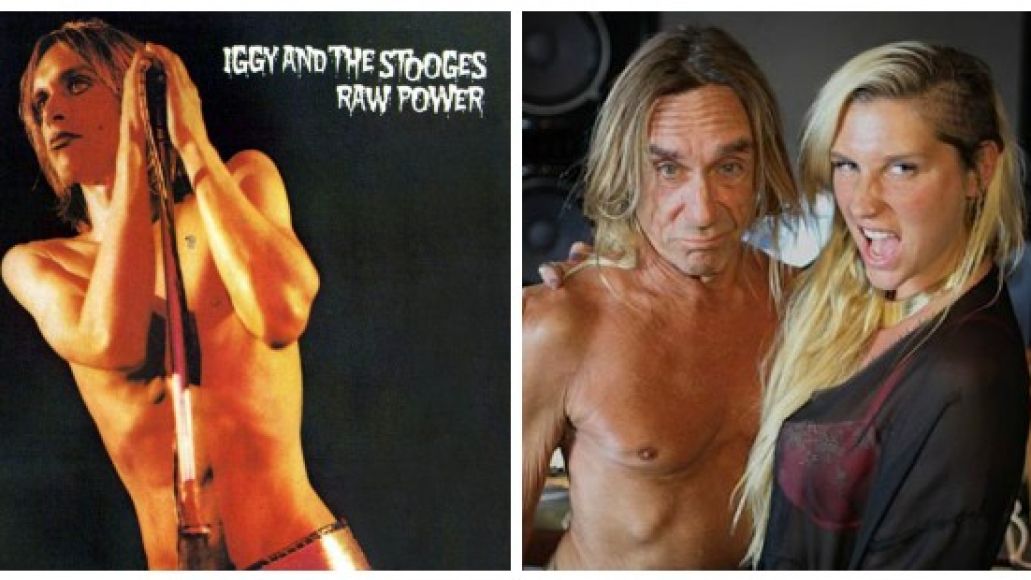 The Stooges practically laid the blueprint for thousands of future punk rock bands with their caustic, spitting sophomore LP, Fun House. Perpetually shirtless frontman and Godfather of Punk Iggy Pop is also credited, by many, as the first artist to popularize stagediving and other self-mutilating stage antics, including rolling around in glass and vomiting. If raw power is a vitamin, Iggy’s been taking it religiously. Pop bested hard drug addiction and went on to have a successful solo and acting career from the 1970s onward — including a memorable scene in Jim Jarmusch’s Coffee and Cigarettes with Tom Waits. Although The Stooges’ searing record from 2013 was titled Ready to Die, Iggy isn’t going anywhere. –Paula Mejia 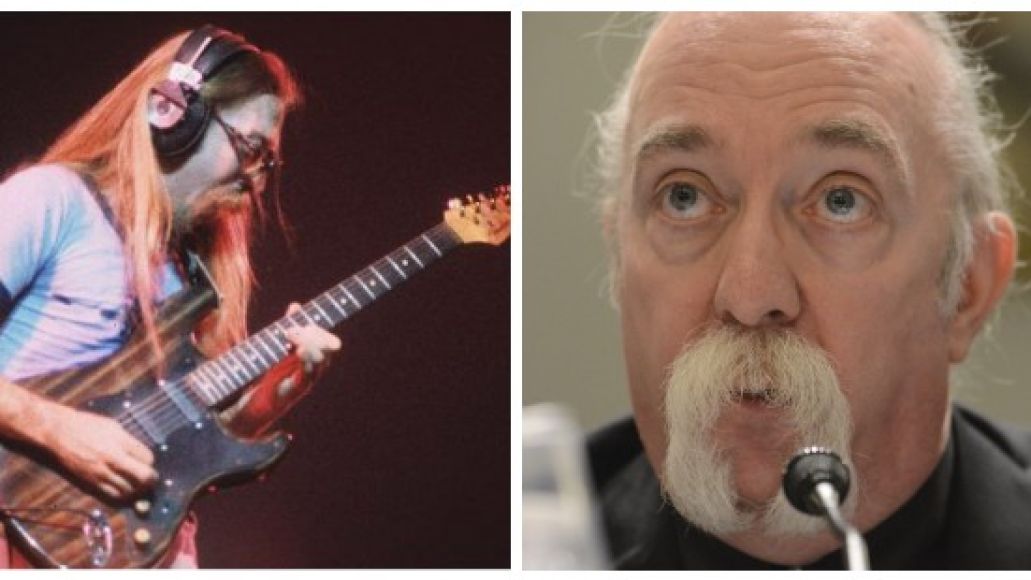 Guitarist Jeff Baxter was a founding member of Steely Dan and later in the ‘70s spent time with the Doobie Brothers, but more recently he’s been hanging around Capitol Hill types, even acting as the chair to the Congressional Advisory Board on Missile Defense. “So, one day, I don’t know what happened. I sat down at my Tandy 200 and wrote this paper about how to convert the Aegis weapon system,” he explained to the Today show in 2005. “I have no idea. I just did it.” Baxter may be the only person to both contribute to multiple platinum rock albums and act as a defense consultant, the two halves very difficult to connect. Baxter himself, however, seems to find the missing link in that evolution: “We thought turntables were for playing records until rappers began to use them as instruments, and we thought airplanes were for carrying passengers until terrorists realized they could be used as missiles.” So, at least one person sees correlations between 9/11 and Steely Dan’s Countdown To Ecstasy. –Adam Kivel 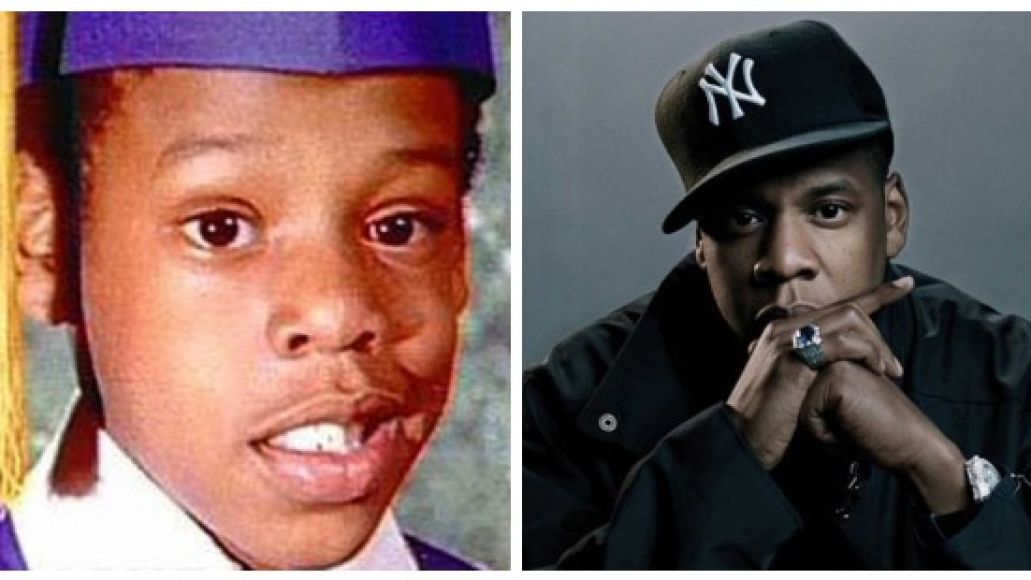 Bombastic rapper, entrepreneur, former record label executive, philanthropist, sports agency founder, short-lived vegan, and father, Jay Z doesn’t seem to waste a second of his time. Love him or hate him, you can’t deny Hova’s sharklike business mentality. Although long gone are his days growing up in the Brooklyn projects, Jay Z constantly pays homage to his roots. He’s collaborated with the likes of Kanye West and The Neptunes on notable work, released pivotal solo records, and become a certified NBA and MLB sports agent in the process. Oh, and he’s married to superstar queen Beyoncé. –Paula Mejia 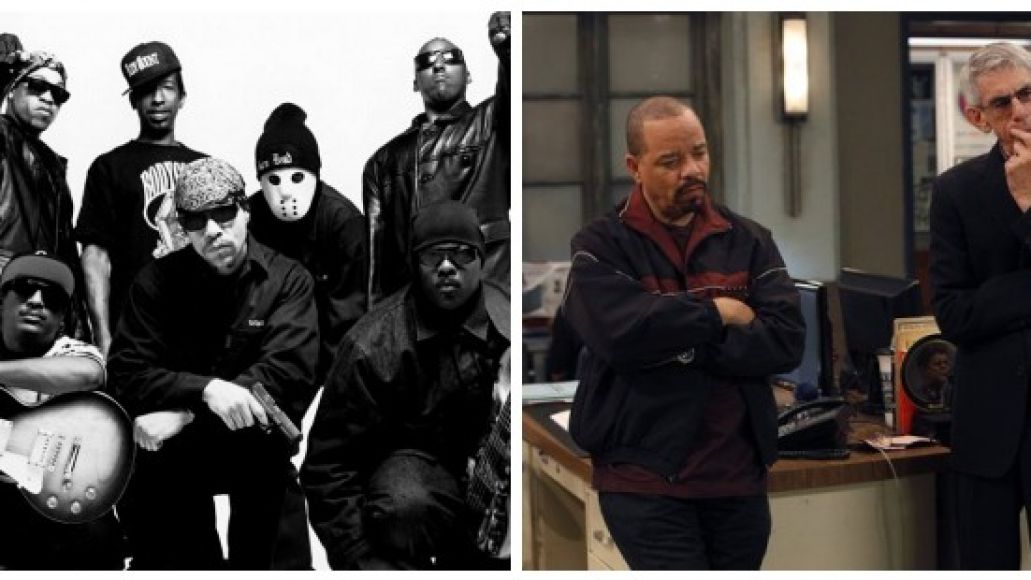 After a stretch of time that involved gangs, a discharge from the military, pimps, and prison, the idea of Ice-T as a man with a badge seemed pretty far-flung. The core of the irony, though, is obvious: Ice made a big splash with Body Count’s “Cop Killer”, and then he himself went on to portray a cop in Law & Order: SVU (since 2000). But, he’d nabbed an acting job as a cop even before the release of Body Count, playing detective Scotty Appleton in 1991’s New Jack City. Though he’s got eight studio albums to his name, Ice-T has evolved past the point of being known as a rapper, thanks to more acting gigs, contributing his voice to a few video games, writing a memoir, starring in a reality show, hosting a podcast, and even narrating a Dungeons & Dragons audiobook. Sure, time traveling to 1990 with footage of Ice with an NYPD shield might have been mind-blowing, but so would the basic fact that he’s become an institution known to young hip-hop fans and grandmothers alike. –Adam Kivel 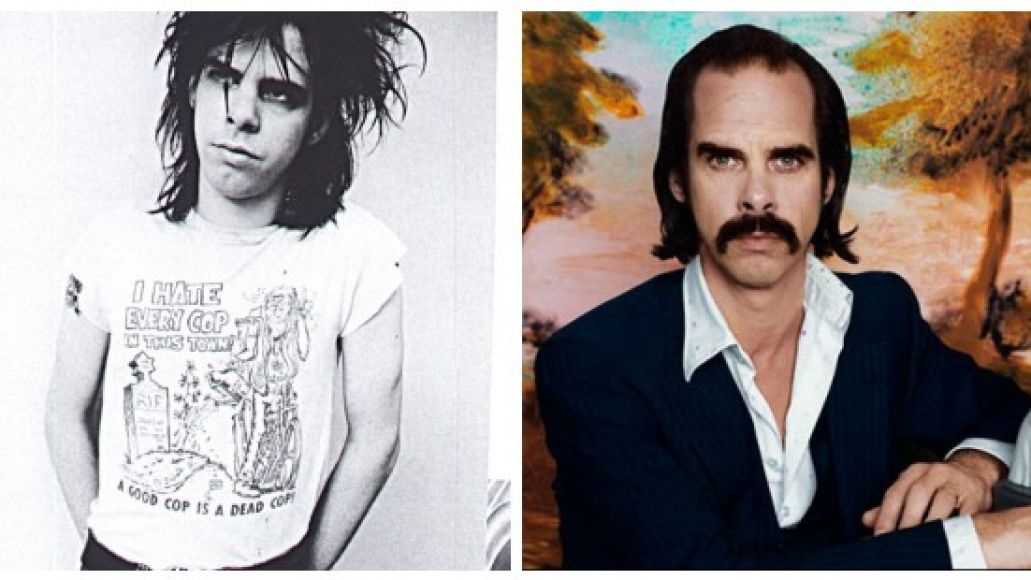 The Birthday Party were only together for six short years, but the skittering goth rhythms were but the beginning for brilliant songwriter and vocalist Nick Cave. In 1983, Cave formed supergroup The Bad Seeds, riffing about sex, death, and religion, and since then has left an indelible impression on the face of art in the 20th century. Also a notable novelist and playwright, Cave has continued to tour with The Bad Seeds with the same caustic energy of a band playing their first big venue. –Paula Mejia 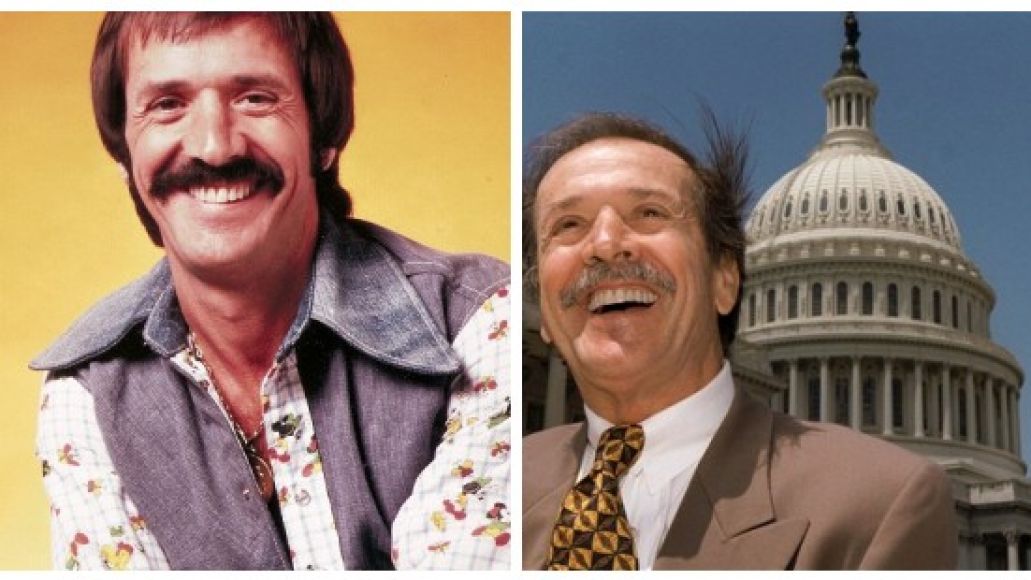 Looking back on the Sonny & Cher days, Cher’s skyrocket to international superstardom in her post-duo days seems as obvious in hindsight as it must have then. But now, no matter his charisma and singing chops, footage of the gleeful, neon and paisley-covered Sonny Bono makes me raise an eyebrow somewhat at his pop stardom (I guess that just means I’ve been corrupted by the pop machine of my ‘90s childhood that spat out whatever looked pretty, despite the vapid soullessness). But, fine, Sonny Bono was a pop star. A goofy pop star, but a pop star. But then that pop star became a serious politician, moving from mayor of Palm Springs to the House of Representatives, co-sponsoring a bill that extended copyright and advocating for the restoration of the Salton Sea. While an untimely accident led to Bono’s death at the age of 62, his evolution from goofy, grinning, mustachioed singer to serious politician certainly qualifies as an unexpected evolution. –Adam Kivel