On Thursday evening, Bonnaroo Music Festival co-founders Ashley Capps and Rick Farman participated in Reddit’s Ask Me Anything (AMA), discussing this year’s festival. They revealed some of their most desired acts, explained why they booked Kanye West and not OutKast, discussed improvements to the festival grounds, and other juicy tidbits.

— They tried to book OutKast, but were turned down. “Unfortunately, their schedule simply didn’t work out for Bonnaroo,” Capps said. “They had some apparently irresistible offers that weekend in Europe which they chose to take instead.”

— Some “white whale” performers they hope to one day book: Farman lists Prince, U2, The Rolling Stones, Justin Beiber (jokingly), jazz band Gateway, and anything with Jimmy Page; Capps mentioned Led Zeppelin, Prince, U2, “And, yes, Daft Punk, too!”

— Responding to a question about Daft Punk playing a secret set, Capps jokingly responded, “Daft Punk can play a secret set whenever they want…except during Kanye’s set :).” But then he added, “There will be a nice surprise with your tickets but its a secret too.” Tease!

— Regarding the “Kanye Fiasco of 2008”, Capps said, “It was complicated and there’s no reason to point fingers at anyone. There are so many moving parts to the festival and, in this case, a bit of miscommunication and a sincere desire to come up with a solution simply didn’t work out the way anyone wanted it to. But we have all moved on.”

— In fact, Kanye almost played the festival last year! “We started the discussion with Kanye well over a year ago. It was time to leave the past behind,” Capps said. “He’s one of the major artists of our time..so there wasn’t any skepticism from us and he was ready as well. We initially had some conversations about him doing something last year…a surprise show…totally out of the box. But it didn’t quite work out. The conversations continued however and now we’re on for 2014. But it wasn’t forced. It evolved pretty organically.”

— The “?” Superjam that’s part of this year’s lineup isn’t Jack White — yet. “It really is a question mark but we have a lot of interest from people that will at least hold par with what we’ve done in the past,” Farman explained. “It’s frequent that some of them come together really late. Last year we didn’t even know if the hip hop one was going to happen until about 2 weeks before the festival. It’s a big commitment for the artist to make so it takes a lot of convincing.”

— The non-Tent stages will remain closed on Thursday evening, though they are working on congestion concerns. “Thursday has always been about putting focus on the up and coming acts and we don’t think that using the Which Stage would work well with that concept. We also like that not having the whole venue open keeps a certain amount of energy in the campgrounds that night…”

— There’s no truth to the rumors that members of Grateful Dead have boycotted Bonnaroo after Kanye West’s performance in 2008. Capps explained, “They’ve been invited back and we’ve had serious discussions. It only failed to happen because of their touring schedule.”

— With the exception of Mumford and Sons’ medical emergency last year, Bonnaroo has never had an act drop out at the last minute.

— One fan asked why Bonnaroo has shifted away from booking jam bands. Capps, “We’ve always booked a diverse line up. Phish played in 2012 too. This year we have Yonder Mountain, Umphrey’s McGee, Tedeschi Trucks Band…off the top of my head. When we book our festival each year, our only goal is to keep it fresh and exciting. Music is continually transforming and reinventing itself – and the jam band scene has also evolved and transformed. It’s one of the many things that makes music so powerful and exciting. We strive to ride the wave.”

— When asked if there would be any way to ease the hours of waiting for entrance to the Comedy Tent, Capps said the current system is the best they have. “We’re totally open to suggestions and its one of the reasons we’re doing this AMA tonight.” Some suggests? Pay-for-priority seating, assigned seating, and screens outside the tent.

— Regarding screens at the Tent stages: “It’s uncertain at this moment whether screens will be added for this year or not, but it’s definitely a priority for the near future.”

— That said, there will be outdoor screens for those wanting to catch the World Cup, much like there was in 2010 when the events overlapped.

— That annoying ditch on the walk from the Which Stage to the What Stage? GONE! “We’ve tried a few things over the years to fix it that obviously have not worked that well but we think we now have the solution… But don’t complain that you miss the long jump competition when it’s no longer there!”

— The overall booking process goes something like this: “There’s a small group of us who get together at least once or twice a week and start brainstorming about who we would like to have perform at the festival. We do research to see who’s planning to tour, who has a new record or special project coming out… we have bands reaching out to us and we’re making inquiries ourselves…we ask the fans what they would like to see… and we’re very passionate music fans ourselves, so we have strong ideas of our own. And we start to make decisions and gradually the line up starts to take shape. 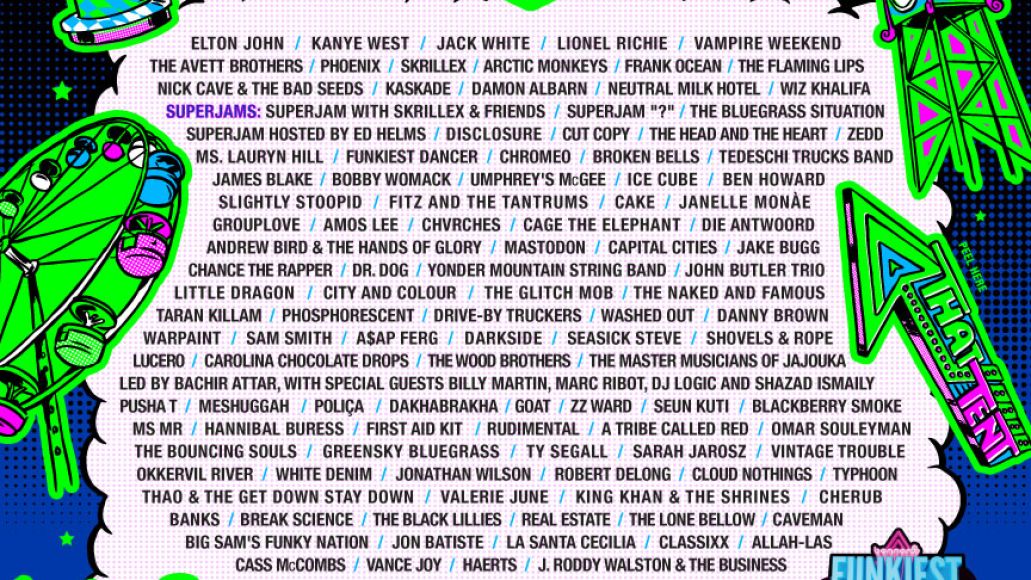