Among the many things that California has given the world, fast food is probably the worst. Like, if you consider all the human health and environmental problems that stem from our resource consumption and how fast food has contributed to our rapid destruction of the planet, we basically fucked everyone. So, sorry about that.

Now, I don’t think Burger Records or the artists at Burgerama III are in any way as harmful as fast food; they don’t matter nearly enough for that. Burn. But the scene that has developed around this growing festival is about as good for a teenager as their diet of microwaved sandwiches and greasy fries.

There’s something to be said for having a good time and turning off your mind for a few hours, sure, just as an occasional double-double isn’t going to clog your arteries. But, a steady diet of Burgerama music and, well, you get the kind of atmosphere present at Burgerama III, particularly the first day. As a culture, I’ll take just about any other music scene this side of EDM over it. Never had I wanted a group of young people to start listening to Death Cab for Cutie more. 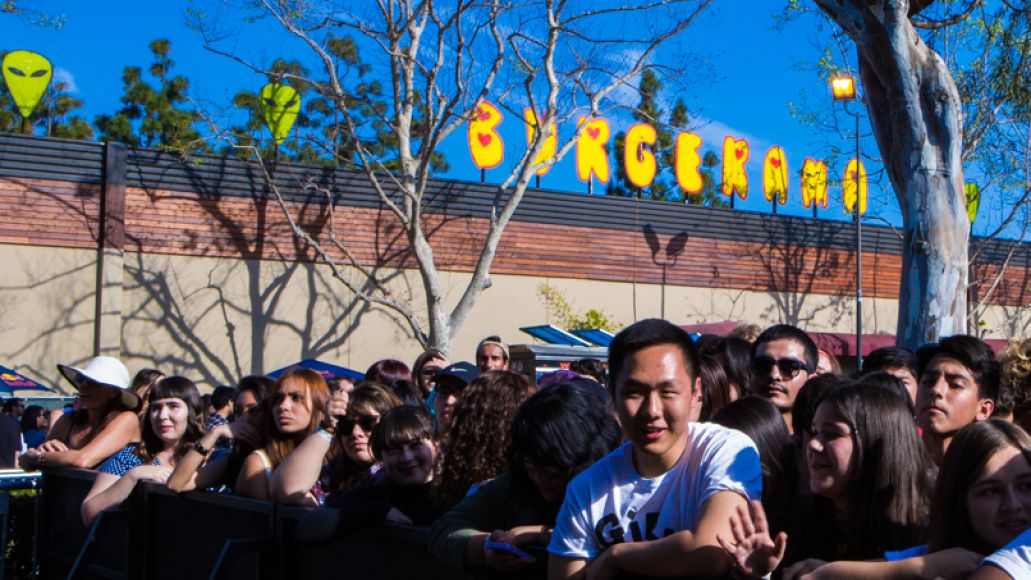 Everyone had a finger pointed at a different portion of the rather obnoxious crowd. Some blamed Orange County, which I take offense to but can’t really refute. Some blamed the audience being young, which is also true but not every teenager looks like extras from Dazed and Confused these days, right? (Actually, I find it hard to believe that this is what 16-year-olds are like these days.) And still, others blamed those of us complaining as the problem with the festival.

Wait, what? It’s my fault that I found it hard to have fun at Burgerama? Well, yes, probably. Because I’m an adult at a kids festival, and there comes a time where grown-ups just don’t relate to some cultural trends going on with the next generation. Though these drunk, druggy, rather homely, and poorly dressed young people may not seem long for this world, they still appeared to have a good time and you just can’t argue with an event that pleases its audience.

That being said, year three of Burgerama did have some indisputable growing pains, though all were easy to forgive and typical of any event that is always increasing in size and reach. Next time they need more food, and better crowd management, and more non-music entertainment. And maybe next time get some new bands. And seriously, no one went to the Affliction booth. 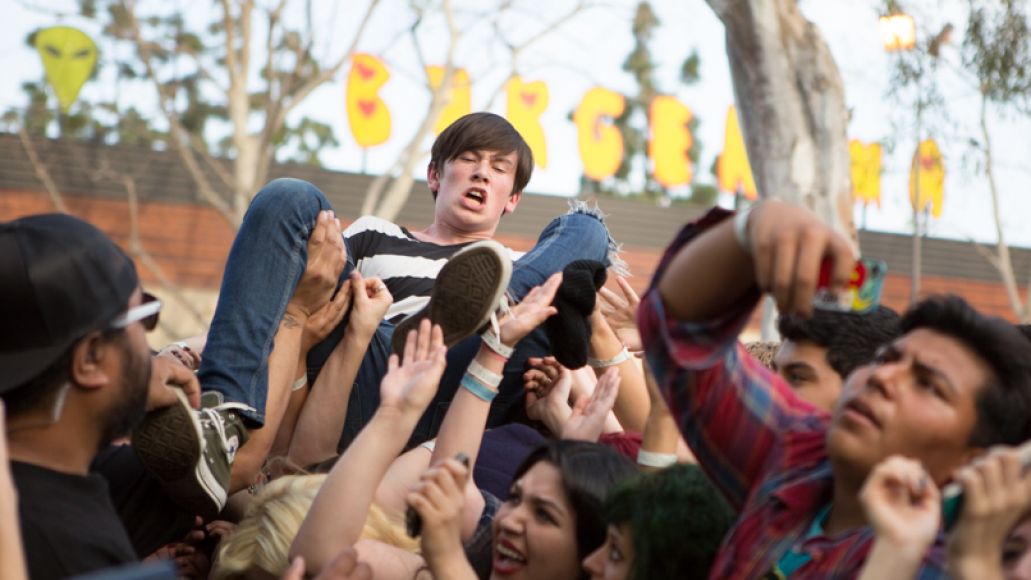 But yeah, if this keeps getting bigger and music trends shift to more of this kind of two-gear monotony, again, I apologize on behalf of California.

Now there was some good at the event, and some less than good, and to make it fun, we’ll keep the fast-food theme going. I apologize for this contrivance in advance, too. 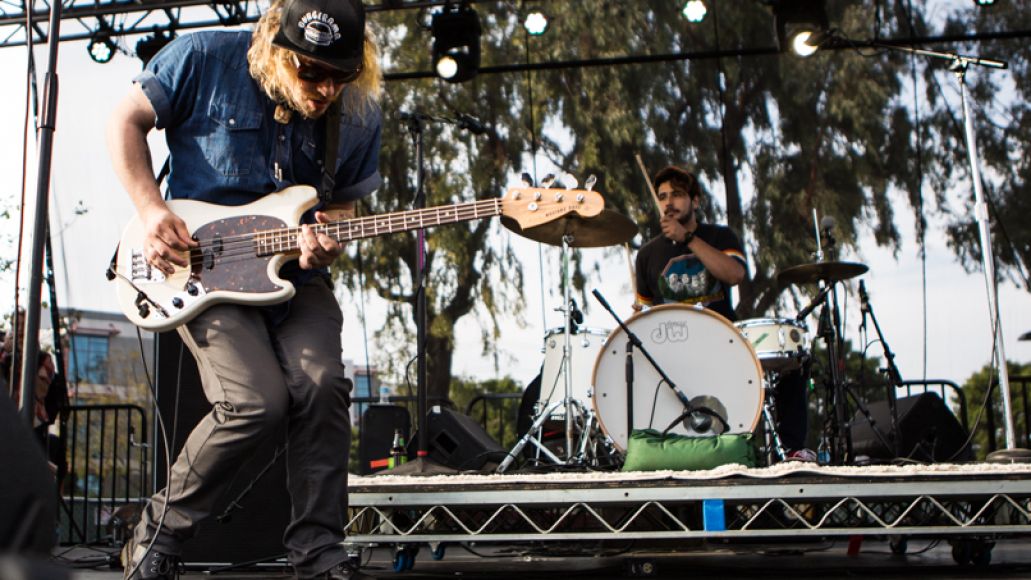 Still regional, but with an ever expanding reputation, together PANGEA were the best band at the festival, rivaled by only FIDLAR in allowing the ability to imagine them transcending this scene and becoming something bigger. But they also seem pretty happy where they are, and like In ‘n Out, will probably be satisfied conquering on a small level rather than competing on a larger one. 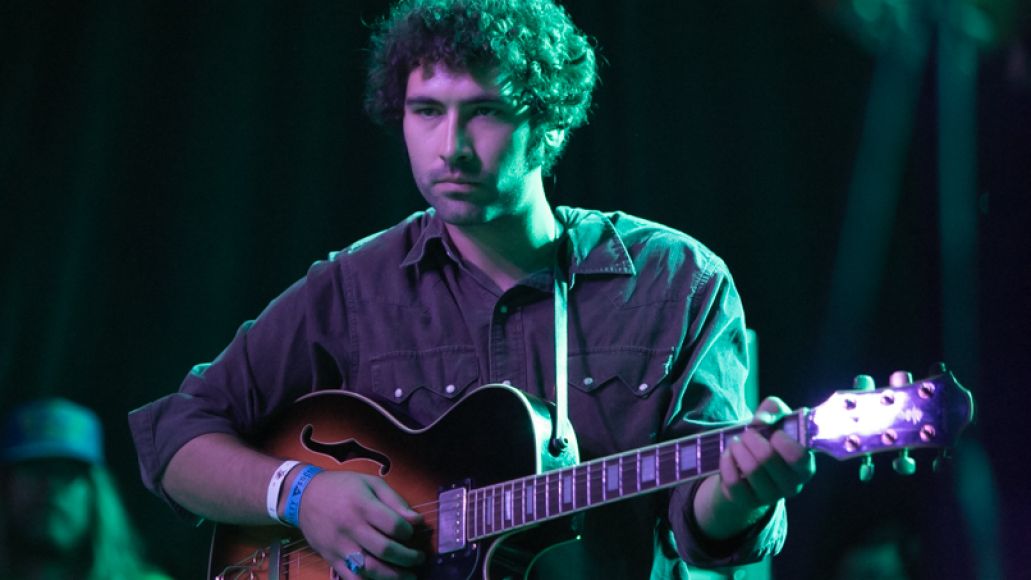 Because of the cowboy boots, mostly. But Allah-Las were a breath of fresh air on Sunday, making music that, though not terribly original, didn’t get bogged down in the same punk and garage influences. These guys have roots in classic rock and can play their instruments efficiently. That seriously puts them in the upper echelon at Burgerama.

allah las were the best at burgerama forsure 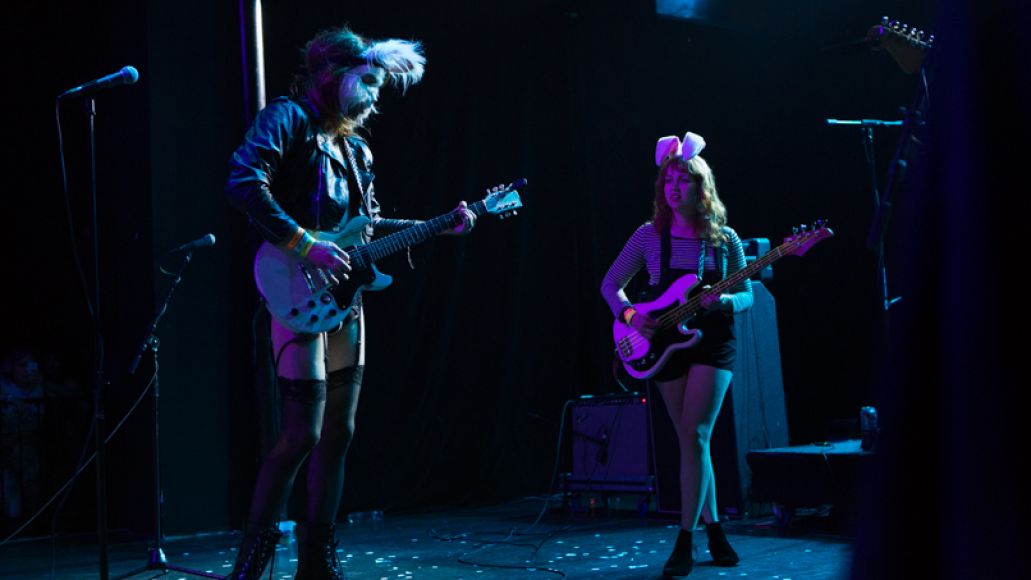 Sometimes a band seems just completely ridiculous on paper, but works once you’re in the moment with them. Nobunny still seems kind of ridiculous in person, who began their set by tossing bunny ears into the audience. They had people still talking on Sunday about their mid-day Saturday set. Was it really that great? No, it was fine, but the kids went nuts, and they won over their audience like excessive bacon wins over anyone that would bother ordering something called a “Baconator.”

You’re nobunny til somebunny loves you and, technically, files papers on your behalf at the Bunny Social Security Administration office. 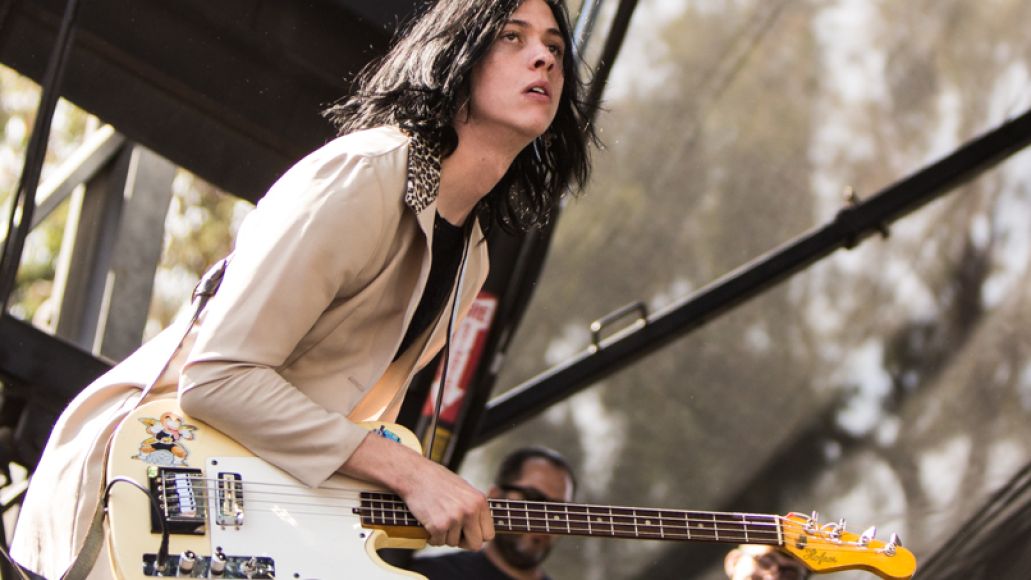 Not quite as overwhelmingly loved as Nobunny, The Garden still seemed to entertain more than they should, riding their attitude into fans hearts, even though their songs were remarkably simple and/or dumb. But, they are twins, make funny faces, and DGAF. Apparently that is enough for youngsters to claim them as their favorite band. 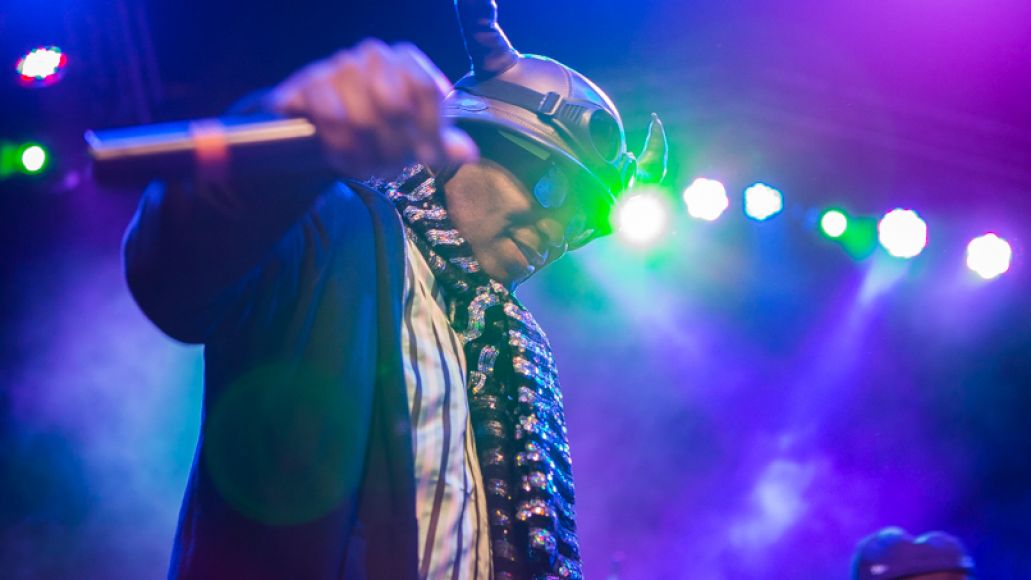 A classic that never caught on as much as it should and now only available in select locations. Kool Keith was (I think) the only rap act on the bill, which is always weird (last year was The Pharcyde), but it didn’t play like an oddball set, even though Kool Keith is very much an oddball. 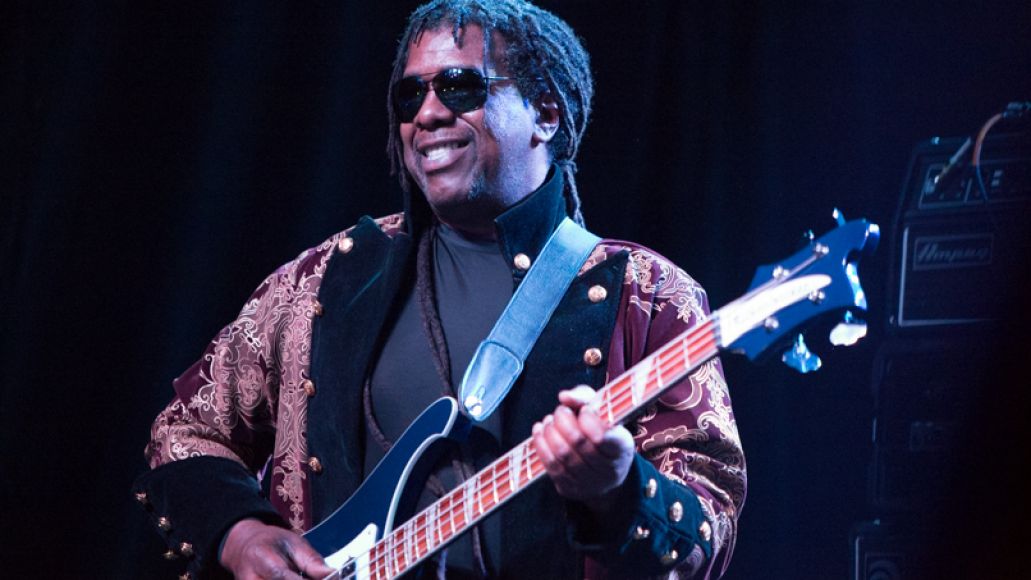 Death were one of the few bands booked that stood out as something legitimately different, and not just because of their age or their skin color. Death had a swagger that was based on their musicianship and songs, not about looking cool and riling people up. Because of their music and talent, they ended up looking cool and riling people up. Like the Subway sandwich, Death were a different breed completely. 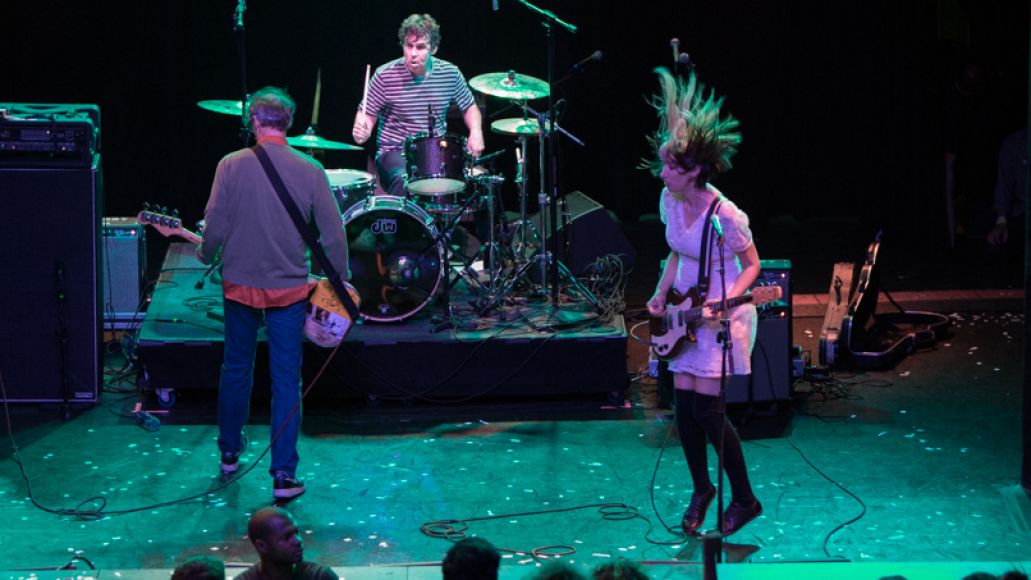 The Muffs, the band, just didn’t realize you were missing, but others consider a classic. I guess. But really, there isn’t that much going on with the band that you haven’t seen before. There is something comforting in how easy it goes down, but really, mostly everybody is doing something a little more daring. Big deal, you have mayo. 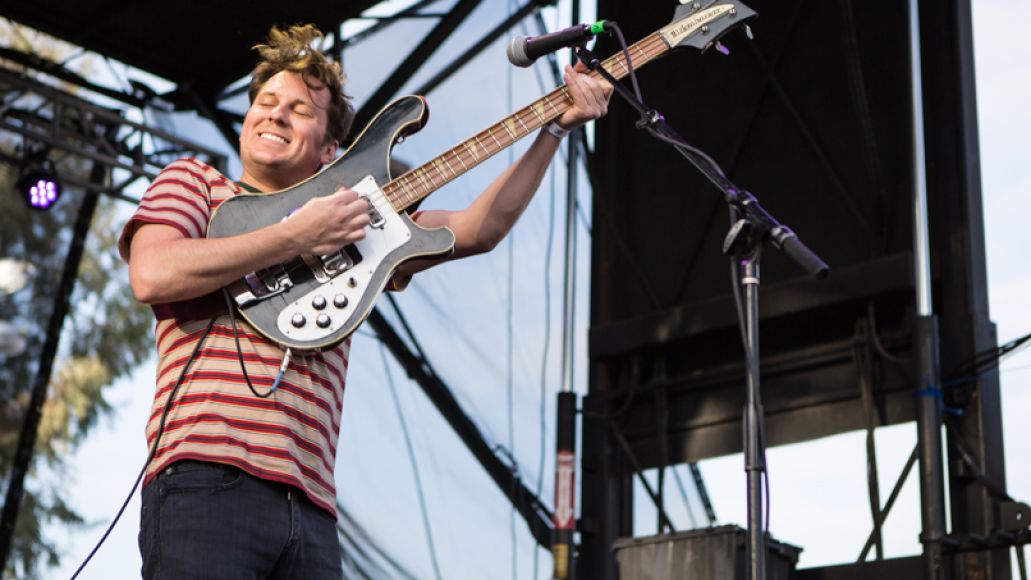 I like to imagine Krusty Burgers are amazing, as The Simpsons deserve to have their burger be something truly special. Tijuana Panthers I also like to imagine are amazing, but this fiction is more because they are so damn likable. It doesn’t really matter that their songs don’t lodge into your memory, even if you’ve seen them 20 times over the past several years.

on the realsies crowd surfing to tijuana panthers made my life. those bitches lifted me up like I was a CHEERLEADER. I felt so HAAAAWT

Mozes and the Firstborn 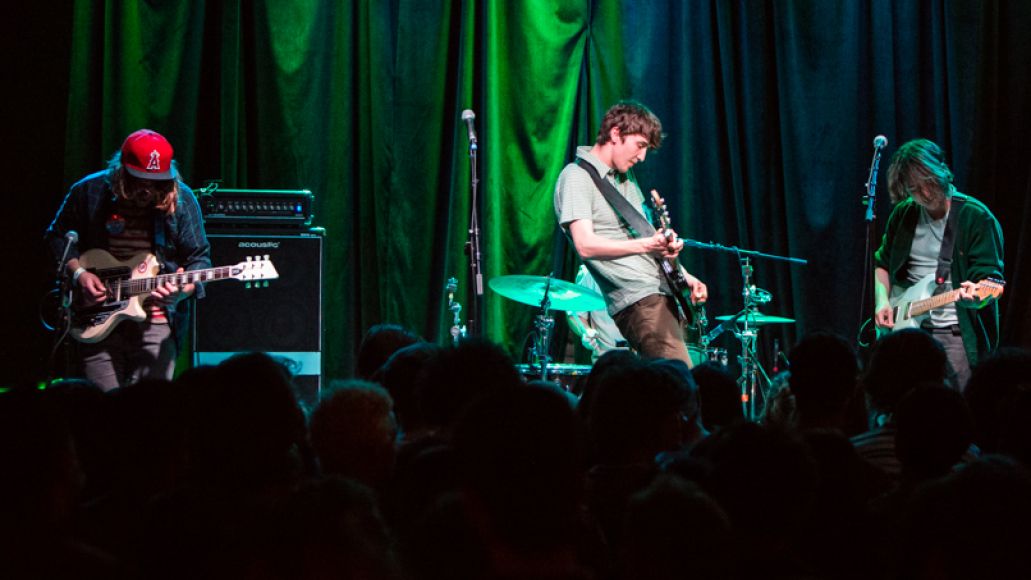 One of a few bands that had legitimate buzz on the bill, Mozes and the Firstborn didn’t exactly ignite the small Constellation Room stage. In fact, a shoutout from together PANGEA on Sunday probably did more for them than their set did the previous day. Still, you probably don’t know what a Charburger is yet either, but when The Habit moves into your neighborhood, you’ll see some how things will become part of your consciousness like they’ve always belonged.

Nothing, this is all we could find:

Exodus 13:1-2 “And the Lord Spake unto Moses,saying. Sanctify unto me all the firstborn, whosoever that openeth the womb…. it is mine” 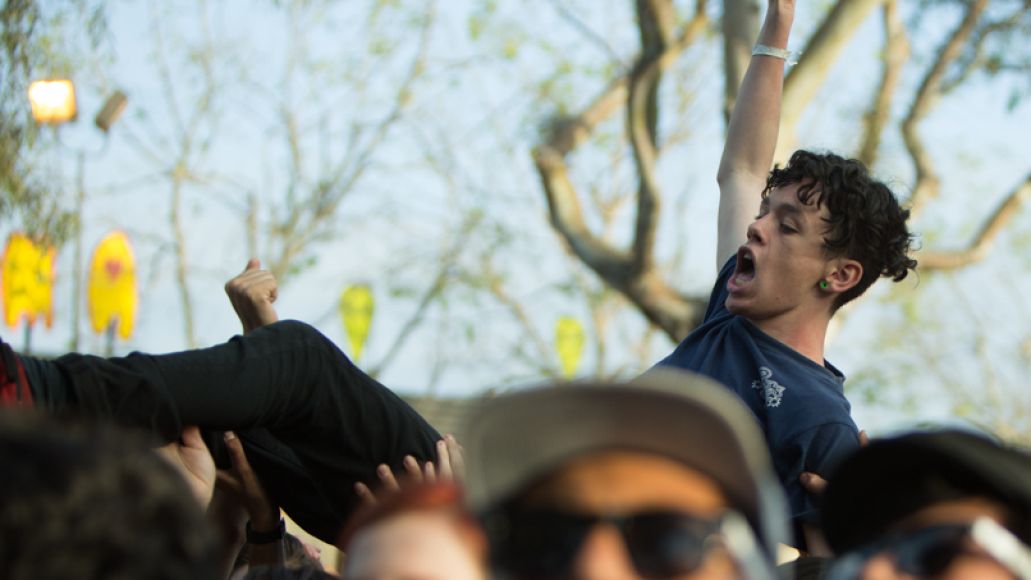 This needs no explanation.

The last hour and a half of burgerama was so damn random. We found a dance party, danced with Brooks and met Mac Demarco. 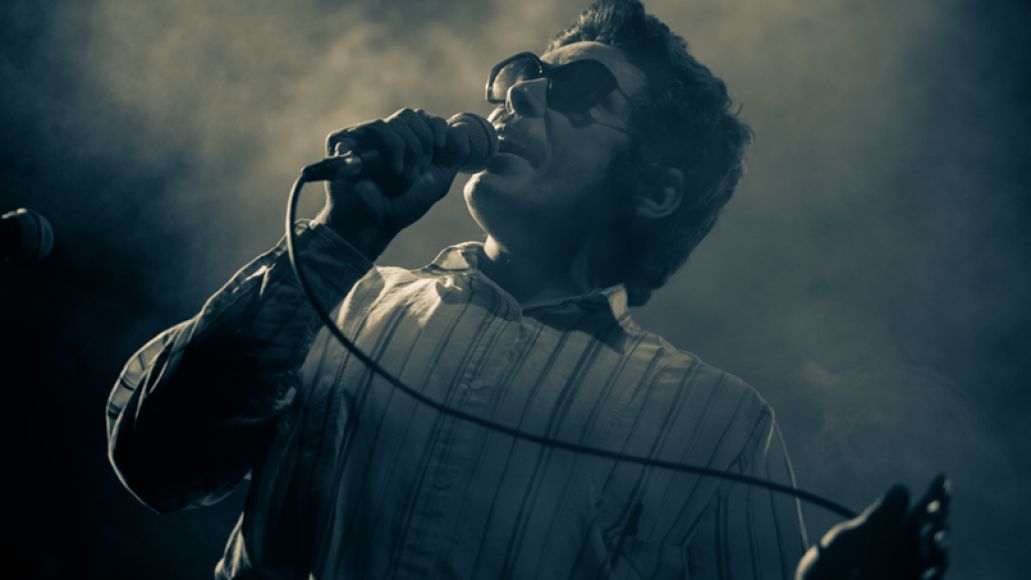 I haven’t eaten at Arby’s in probably 20 years. I used to like these when I was a kid though, and then I had a bad experience and never again. Not that you will eventually have a bad experience with The Growlers, but I don’t know many adults who dig on them much. The best part of their set were the random Growler fans that tried to infiltrate the pit, basically looking like they could be in the band, without cameras, standing still trying not to be noticed. Security slowly tapped each one on the shoulder like it was a game of hide and seek, escorting them peacefully back into the audience. It was both charming and idiotic at the same time. Kind of like eating a Beef n’ Cheddar.

i love the growlers just as much as the next person but if you went to burgerama just to see them, i hate you 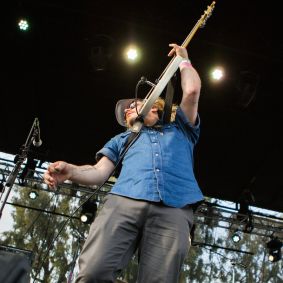 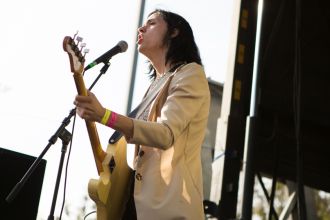 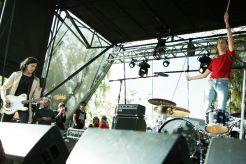 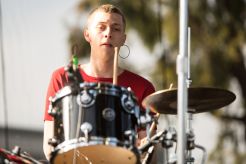 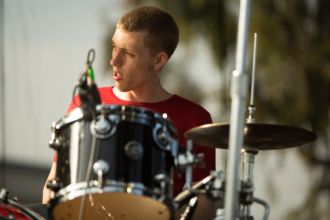 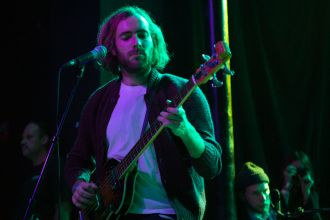 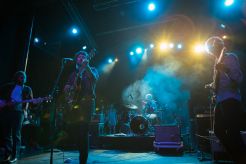 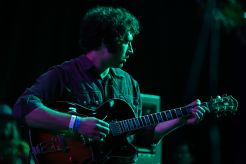 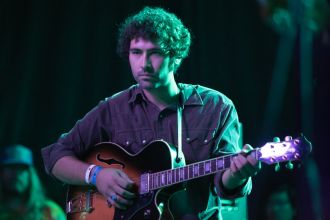 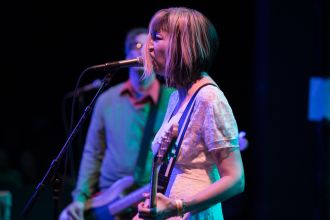 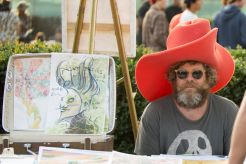 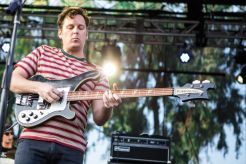 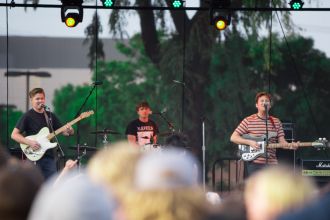 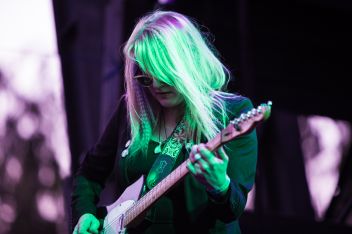 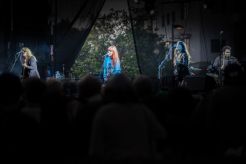 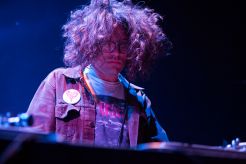 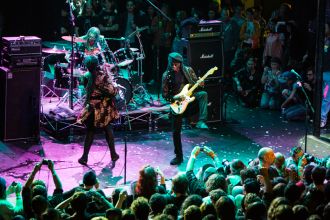