Chicago isn’t short on musical icons to brag about. The Smashing Pumpkins proudly served as the Windy City’s ambassador to Alternative Nation in the ’90s. On the hip-hop front, the city proudly boasts the most famous of college dropouts in Kanye West. The band Chicago was savvy enough to ensure that you’d always think of Chi Town whenever its pristine soft pop wafts its way through your speakers. Then of course there’s blues, a word that almost feels incomplete without Chicago placed as a qualifier before it. Pick a genre, the Second City’s got it staked out.

Still, many would argue that Chicago’s music scene draws much of its power on a more micro level. The lifeblood of Chicago’s vibrant musical community pumps through its extensive channel of venues large and small. Bands and artists, too many of them to name, crawl their way in and out of the Double Door, Beat Kitchen, Metro, Cobra Lounge, and an endless list of other places on a nightly basis, ensuring that the sound of Chi Town doesn’t fall on deaf ears.

It also funnels its way through the Hideout, a decidedly off-the-beaten-path live music haunt banked in a thinly populated stretch in Noble Square. It’s here on a mild Sunday afternoon in late March that we meet one of Chicago’s more unlikely and noticeably less purebred musical institutions. Putting a physical shape and face to the old saying “No rest for the weary,” Jon Langford pulls up in front of the charmingly ramshackle venue, fresh off of a 350-mile drive direct from a show in Southern Illinois the night before. 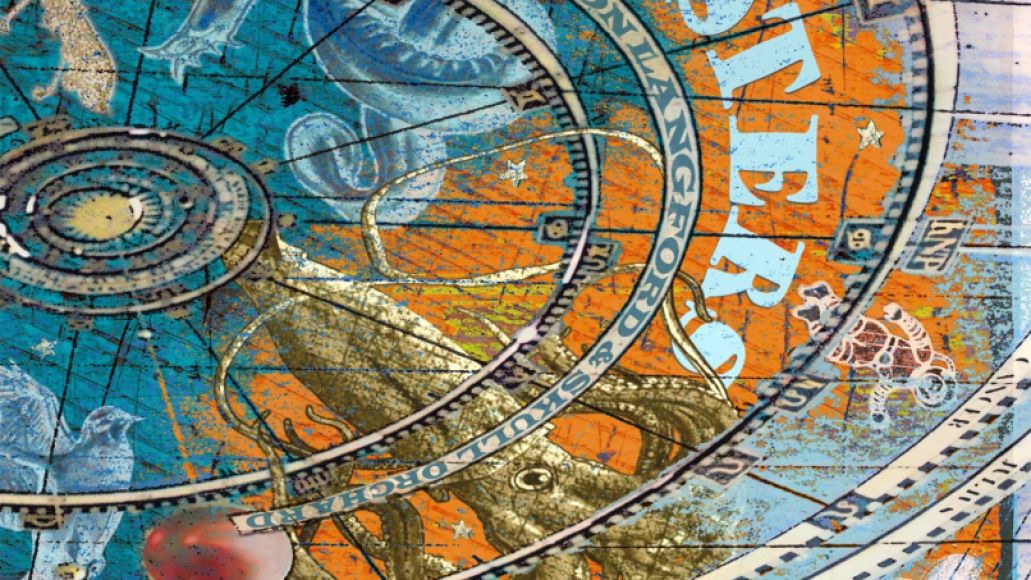 The famed Mekons/Waco Brothers frontman has arrived just in time for a soundcheck, except for the fact that his wife and kids have yet to arrive with his guitar and amp. In just a few short hours, Langford and his Skull Orchard backing band will play to an intimate but well-attended room full of longtime admirers eager for a first listen of his new solo effort, Here Be Monsters. The hour-plus early bird set wrapped up by about 9:30, but enough sweat equity dripped from the Welsh singer’s pores by night’s end to earn him more than a few handshakes, smiles, and well-wishes from friends and fans, many of whom have followed his every step since he made the city his adopted home in 1992.

“I get a lot of support here,” Langford said as we saddled up to a table near the Hideout bar before the show. “One of the things I really liked about Chicago when we first started coming here with the Three Johns and the Mekons in the ’80s was there was a real creative scene going on here. There were clubs run by enthusiasts, radio stations run by enthusiasts. There were labels. We met the Bloodshot (Records) people when they first started doing things, then my agent put me in touch with Cory Rusk at Touch and Go. A lot of things happened here that I wasn’t used to. It was a different attitude driven by much younger music people doing things for themselves.”

Langford’s ascent to his current standing as a figurehead of Chicago’s music scene is one he shrugs off with disarming self-effacement. “I’m maybe a shaky pillar in the corner,” he says with a laugh. His modesty is refreshing, but the truth is Langford has invested a lot in weaving himself into the fabric of Chicago’s musical culture. Whether he’s playing with Skull Orchard or the Waco Brothers or keeping busy with his second love of visual art, he’s around. That dedication to the city has been reciprocated kindly by a legion of local followers who proudly champion his music. But he didn’t land in Chicago on completely solid footing.

The Mekons’ artier spin on punk rock’s first wave served them well for more than a decade after first coming together in Leeds in 1977, but by 1989 the band’s foundation had begun to crack. The Mekons Rock and Roll, the band’s first and only release for A&M Records, failed to sell despite critical acclaim, and soon after the label dropped the band from its roster. When Langford married and relocated full-time to Chicago in 1992, he faced an uncertain future as the Mekons’ fate hung precariously in the balance.

“There were a lot of lawyers surrounding the band at the time,” he recalled. “Everything was kind of imploding. There were only four of us left in the Mekons at one point. I was just licking my wounds. I didn’t know what I was going to do. I got married, and I didn’t even have a job. It was really scary when I look back on it.”

But there was a silver lining to Langford’s open-ended arrival in Chicago. By not knowing what to do, he was free to do anything. The singer made the most of the opportunity, building relationships with club owners, labels, and others like Kelly Hogan and Neko Case, who also were new to the city. He started writing his own songs and even turned his attention back to art. What started as an uncertain move to the States led to a sense of creative rebirth.

“Things in England used to be so grindingly negative,” he said. “You’d have ideas and say, ‘Well, this would be good,’ but they’d get shot down. No one would do anything. Over here, if you had an idea it was more, ‘Oh yeah, you can do that.’

“A lot of things popped up from being in Chicago. I knew people here. I had a support group. I just slowly fell into doing all these strange things, like doing visual art again. I went to art school and just damned the brushes almost immediately because punk rock was more exciting. Then after 15 years of punk rock, painting all of sudden felt really interesting to me again. I did that, and I also started writing songs on my own. I didn’t actually release a solo record until 1998 but started writing because I was isolated from the people I was used to working with.” 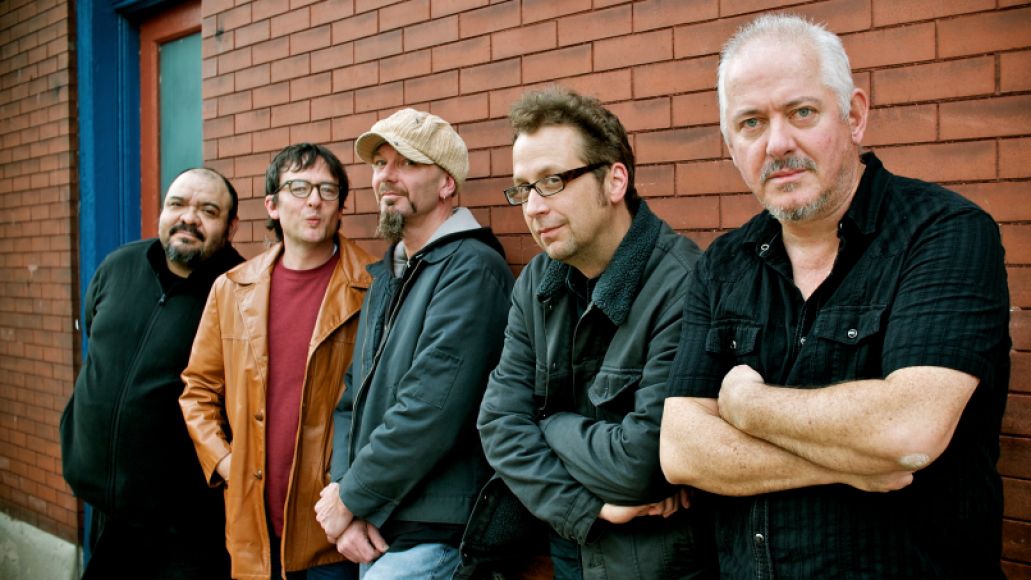 Langford’s music began to lean more heavily on roots rock and Americana, genres that the Mekons flirted with on records such as 1985’s Fear and Whiskey. Once again, Langford’s Chicago ties pointed him in his new musical direction. Having become acquainted with the Sundowners, Langford started diving into the back catalogs of Johnny Cash, Hank Williams, and other traditional country staples.

“We saw that there was this grassroots kind of country thing going on here,” he said. “It had nothing to do with the Nashville scene or corporate radio. And it was very simple music. It didn’t feel alien to me to get onstage with the Sundowners to play a Johnny Cash song. So, I’d go home and learn some Johnny Cash songs, and that kind of influence found its way into the Mekons in a sideways sort of way. It was almost like osmosis.”

In the years since, Langford has honed and mastered his punk-tailored take on outlaw country with the Waco Brothers. Over the course of nine records and 19 years, all spent with insurgent roots rock label Bloodshot Records, the Wacos have not only built up a stunningly consistent body of work but have also earned a reputation as one of the city’s most kinetic live bands, a tag that they make good use of with regular shows all around Chicago. More recently, Langford has branched out his folksy roots punk to solo work with Skull Orchard. Here Be Monsters, which was released in March, is another earnest collection of songs that play right into the singer’s dusty musical wheelhouse, chock-full of roots rock bangers and folkier, singer/songwriter balladry in equal measure.

It might sound like the singer is traversing down similar country roads, but there’s a more personal feel to the record, one Langford says can’t be replicated with the Mekons or Waco Brothers. Playing with Skull Orchard, the sounds, thoughts, and themes all fall squarely on his shoulders. Specifically, the new record was inspired visually by Langford’s fascination with astrology and maps, unique themes that wouldn’t have fit as cleanly into place with his other projects.

“It could have been two records,” he says. “We had about 20 songs, and we just chose the ones that fit together most coherently. The title’s reference to music and art. That’s my domain,and I can do anything I want with it. There’s a lot of freedom that you don’t get working in the mainstream where nothing happens.” 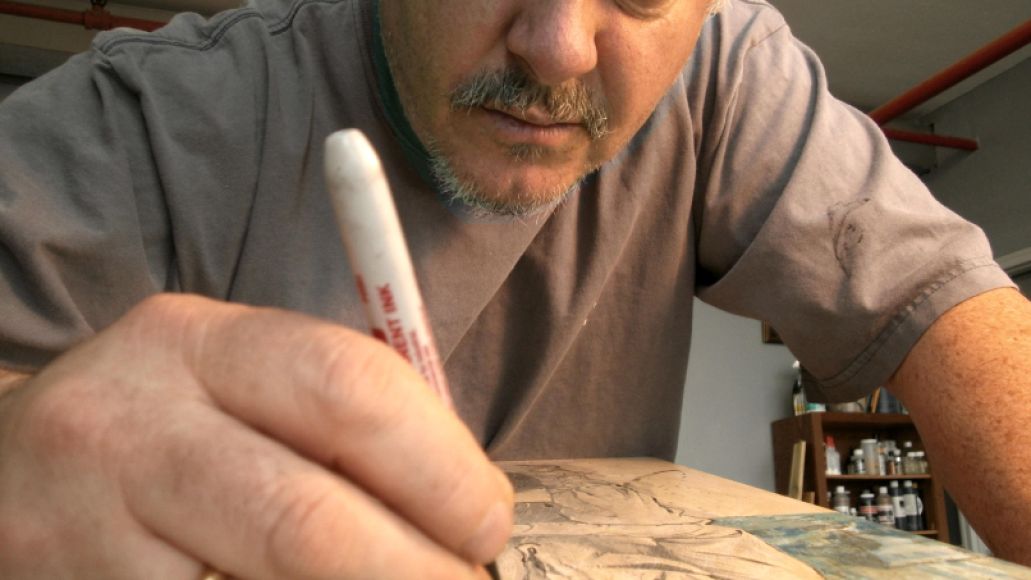 That willingness to work just enough outside of convention is what has helped Langford thrive over the years, particularly in Chicago, a place where he’s not only allowed to stretch his wings and reach for new ideas, but where he’s pretty much expected to do so. In Chicago, he’s surrounded by a small army of his strongest champions. He has the security of knowing that no matter where he decides to take his music next, there will always be The Hideout, Schubas, or just about any place in the city with a stage. He’s home.

“I try not to play here every week,” he says with a laugh. “But it’s tough not to when you have an audience that’s there and is interested in what you’re doing. Chicago’s been very patient with me.”