In their solo careers, Ted Leo and Aimee Mann write songs containing words like “timorous” and “tourniquet.” Although they use language in very different ways — he’s the political punk with the world’s biggest heart and best vocabulary, while she knows the most efficient ways to stimulate your mind while breaking your heart — they’re among the greatest songwriters of the last 30 years. Whether you’re a super ambitious ESL student or an aspiring troubadour looking to stop rhyming “love” with “dove” and “up above,” you can learn plenty from their discographies. The tougher question is what you get from them when they join forces as The Both.

It’s clear what this side project (which began after the longtime friends toured together in 2012) offers Leo and Mann. Speaking by phone with Consequence of Sound, both described The Both as a welcome respite from what passes as the 9-to-5 norm in their daily lives.

“We were both really excited about it, and not necessarily that excited about making another solo record of our respective selves,” Mann says. “That’s how it was for me, anyway. We’d been doing so much touring [together], and the parts where we were onstage together were my favorite parts. My thinking was, ‘Let’s do more of this and see if we can write some songs.’ And once we were writing songs we were really pleased with, ‘Let’s keep it going, and release a record, and do that, and see where it goes.’” 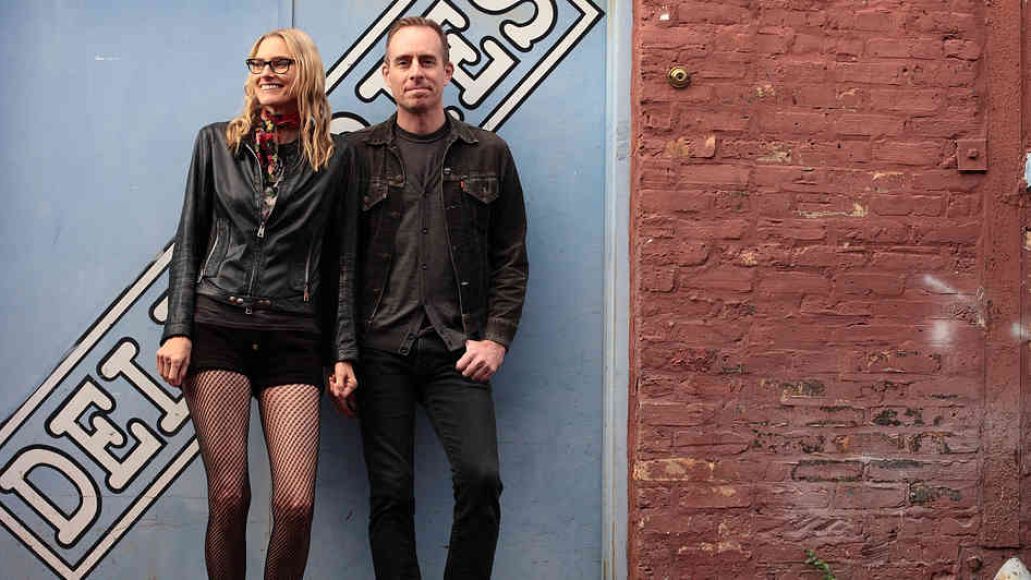 They’ve done exactly that, and on April 15th, they’ll release their self-titled debut via Mann’s own SuperEgo Records. Musically, most of the 11 songs veer closer to her sound — that bleak and biting blend of ‘60s pop, ‘70s AM gold, and coffeehouse folk she’s given us since breaking from her ‘80s new wave group ‘Til Tuesday — than they do to his Celtic-tinged power-pop dive-bombs. But as Leo says, he’s never been a straight-up protest singer, and as far as he can tell, the record lives “somewhere in the middle” of whatever distance separates their writing sensibilities.

“It’s not that I don’t ever write simple, strident political screeds,” Leo says. “I do from time to time, but more often than not, politics is the lens, and forgive me if this sounds self-aggrandizing, because I don’t mean it to be, through which I’m singing about the human condition.”

Mann agrees, and while she’s seemingly less concerned than Leo is with dispelling the image many people have of her (that of the perpetually bummed-out singer-songwriter), she insists her partner isn’t the idealist he might seem.

“Ted’s pretty depressing,” she says with a laugh. “Trust me. I’m not very political, but Ted is plenty depressing.”

“It’s something that gets overlooked in my music,” Leo says. “Much to my chagrin.” 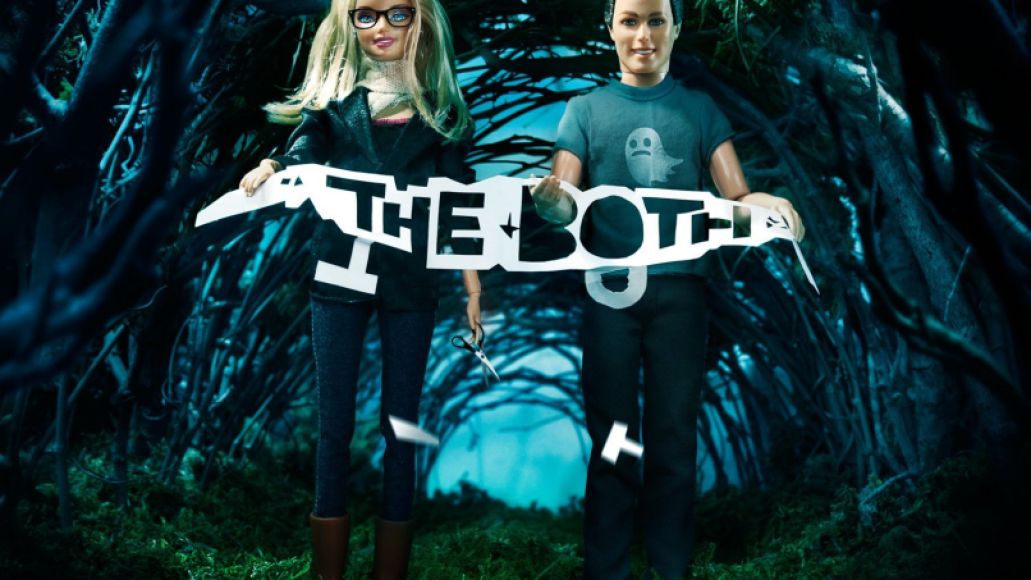 Even chatting via conference call, fulfilling press obligations from opposite ends of the country, Leo and Mann have their banter down pat. Onstage, they’re even better, and last year, when the duo delighted their overlapping fan bases and thousands of Twitter followers by staging a handful of Both dates across the country, the quips and asides were nearly as great as the songs they fed into.

That’s another thing Leo and Mann get from The Both: travel buddies. Most of their stage patter last fall centered on touring adventures, and “Milwaukee”, one of the finest songs on The Both, kicks off with a line about the Fonzie statue they encountered in the titular city. During their phone interview, they chuckle about the dude in the G.G. Allin shirt who gave them a knowing nod in Michigan, and if there were more time to talk, the conversation would surely include other colorful characters they’ve met along the way.

Again, it’s no mystery what they get out of The Both, and another album highlight, “You Can’t Help Me Now”, opens with a line that might as well describe the project on the whole: “Any time you establish a world of your own, you get thrown.”

Perhaps not surprisingly, that lyric comes compliments of Mann, and as it turns out, it was the opening serve in the back-and-forth volley that was their songwriting process. While Mann says the very first Both song to come into being isn’t about the group, per se, there are elements that describe their partnership.

“I know that song, for me, was a little bit about mental illness and this idea of, ‘Look, I know you’re my friend,’ or whatever the relationship is, ‘and I know you love me, but that’s not really gonna help,’” she says. “It’s not something that can be helped just because you care.”

“Honestly, in our friendship, that’s something we can discuss with each other: our mental well being,” Leo adds. “I think part of that song probably started from discussing how tough it is, the manic life that you go through being on tour, the ups and downs of being onstage… It’s helpful to be able to go through that with someone who really understands that when things are great on tour, they’re the greatest. When things are bad on tour, they’re really bad.”

If The Both is about commiseration and two musicians sifting through some of the baggage they accumulate on the road, it’s also a chance for Leo and Mann to push themselves artistically. That’s true in terms of the music; neither is especially famous for singing harmonies, and Mann, in particular, says she had to bone up before hitting the studio. The lyrics fit that bill as well. As one might expect from two songwriters who care as deeply about words as these two do, the songs didn’t come together haphazardly, and as they swapped lines, they had detailed conversations about what each song is about. When they sing “You Can’t Help Me Now”, they may not be addressing the same “you,” but they’re at least coming at the subject from a similar point of view.

“No one’s just intercepting the ball and running willy-nilly down the field,” Mann says. “There’s definitely a lot of, ‘So, what are you saying in this first verse? What’s happening? What did you want to happen in that second verse?’ Within certain guidelines. But you do like to know more or less what you’re trying to say, even if the brief for the song is more an emotional tone rather than a strict narrative.”

“It helps to have that feedback from the other person,” Leo says. “We made a real conscious effort to really work on setting aside ego and the preciousness you sometimes feel about your first draft of things when you’re writing and really work together on creating something that was genetically of the both of us. After one or two fits and starts of the emotions of actually working on setting that stuff aside, we got into a great system where I wound up looking forward to those discussions and that feedback. By and large, we were able to improve our first drafts having those discussions.”

While the resulting songs are, lyrically speaking, more Leo-like in their opaqueness and the ways in which they’re open to interpretation, The Both does, indeed, feel like a coming together of two distinct voices. Maybe that’s the takeaway for listeners: Two unique artists who’ve never needed outside help have come together in the spirit of friendship and experimentation and come up with something that’s a true hybrid. It’s punky and folky and hard to pin down as either hopeful or negative. Mann hopes The Both won’t be a one-off, but even if it is, it’s anything but the “vanity project” she’s hoping to avoid.

“We’ve carved out something, and for some reason, we’re able to set aside our egos, and accept the other person’s ideas, and listen to criticism without getting touchy, which is, for any human being, not that easy,” Mann says. “Especially when you’re used to being in charge of everything.”

“But we keep our eye on… I can’t say ‘the prize,’ because that would drive me crazy,” she adds, careful as ever to say something thoughtful and relatable without resorting to cliché. “But the bigger picture, and how rewarding the bigger picture is.”

Ted Leo and Aimee Mann: On Being The Both