Last week, the sixth edition of the Chicago International Movies & Music Festival, aka CIMMfest, took over parts of the Second City for four days straight. Founded by musician Josh Chicoine (Cloudbirds, The M’s) and filmmaker Ilko Davidov (BulletProof Film), the festival has expanded over the years to highlight films, concerts, DJ sets, live score performances, and panels that “show just what movies and music mean to each other.” That drive is what makes the festival so unique, and so appetizing for music obsessives looking to discover more.

This year, major alternative players like Yo La Tengo, EMA, Booker T, Murder by Death, Trust, and Escort headed an exhaustive bill of films that ranged from (new and old) documentaries on the Mississippi Delta blues, Grant Hart, the Mekons, and Townes Van Zandt to feature films set in the world of music a la Pleased to Meet Me, Metalhead, and Palestine Stereo. There were also an assortment of panels that touched upon noteworthy industry subjects like live streaming, women in music and publicity, and home studios. Remarkably, a few shed light on topics that most wouldn’t even care to know, specifically the music going on in prisons.

They have a long way to go before they start rivaling the likes of, say, South by Southwest, CMJ: Music Marathon, or Sundance, but that’s not exactly their goal, either. This isn’t about flashy premieres, exclusivity, or buzzworthy talent — it’s more or less an epicenter of information between two mediums that continue to depend on eachother as the clock keeps ticking. Admittedly, there’s room for improvement, and especially expansion, but it’s certainly a start. So, in honor of the festival’s sixth edition, we pieced together our six favorite films/events we caught over the bustling weekend.

“I feel like an asshole,” Tim Rutili kept whispering into his microphone. He had just terminated his improvisation with Califone abruptly after the film they were scoring, Water & Power, cut out to a DVD menu screen. He figured the film was over. It wasn’t. Back in the booth, a projectionist struggled to get the film back on track, while the audience offered support for Rutili’s gaffe. “You sounded great!” someone said.

But that’s the kind of transportation good movies promise, and it’s all the more impressive when they can achieve it without story. Until the visuals cut out, we weren’t in the back room of the 1st Ward in Wicker Park; we were somewhere between Los Angeles and our own nightmares. –Sasha Geffen

On January 20th, 1969, months before the release of their self-titled debut, Led Zeppelin performed in front of roughly 50 teenagers at Maryland Youth Center… or did they? No posters, ticket stubs or other ephemera exist to prove the show occurred. Led Zeppelin’s former tour manager denies it ever happened. Yet the show’s promoter and a handful of eye witnesses claim to have been there.

Over the course of this feature-length documentary, director Jeff Krulik chases the fraying threads of evidence in a search to uncover the truth. Part loving homage to this wild moment of classic rock pre-history, part investigative journalism, the whole is a funny, entertaining journey through foggy recollections and poorly documented early days of a band that just months later would become legends.

Adjacent to the story, but forming the film’s core, are the cast of oddballs, former hippies and other music die-hards reminiscing about these halcyon days, when a “highly intoxicated” Rod Stewart and The Faces played the same youth center, or a peanut butter-smeared Iggy Pop and the Stooges freaked out the audience at a nearby church. It is an eye-opening experience to remember that “rock gods” like Led Zeppelin and Iggy Pop were once small-time bands hustling for gigs and, sometimes, threatening promoters for gas money.

As Krulik and his interviewees reverentially sort through old show posters and ticket stubs, it is difficult not to see one’s pot-bellied future in the frayed tie dyes and hazy recollections of epic shows with bands before they got big. –Kris Lenz


Be Here to Love Me: A Film About Townes Van Zandt

Margaret Brown’s 2004 documentary on the late Townes Van Zandt never betrays its viewers. The film succeeds because it doesn’t coddle its subject, nor does it set out to condemn him. Through interviews with his friends and family, as well as some archival footage and recordings of Van Zandt himself, Be Here to Love Me documents the songwriter’s struggles with mental health, drink, and even success. There are familiar beats of rock docs’ past, but every person’s story is unique and this film proves Van Zandt no different.

Interviews with Guy Clark, Kris Kristofferson, Steve Earle, and other country luminaries prove illuminating. Willie Nelson tells a tale of how “Pancho and Lefty” was a last-minute addition to his 1983 album with Merle Haggard, thanks to a recommendation by Nelson’s daughter. Sonic Youth drummer Steve Shelley discusses sessions with Van Zandt that led to nowhere due to the latter’s declining health, and death shortly thereafter.

However, the most telling interviews come from the two Van Zandts. Townes, the father and subject, was quick witted and forever armed with a smile, both attributes which must have masked the pain within. After being diagnosed with manic depression in his 20s, we learn of the shock treatments which came post-diagnosis that cost Van Zandt all memories of his childhood. J.T., one of his three children, loves his father but is honest about how drinking and distance cost them a closer relationship. How he discovered his father died is the most upsetting moment of this retrospect.

But we can’t forget the music, which brought us to the complicated Van Zandt to begin with. Any good documentary should not only inform people, but create such a thirst in them that they will want to discover more. Be Here to Love Me does this in spades. Excuse me while I go look for every performance of “If I Needed You” on YouTube. –Justin Gerber

South Africa’s dance styles are as diverse as the racial and socioeconomic backgrounds of the cities, townships, neighborhoods, and ghettos that gave them birth. Bryan Little’s The African Cypher follows a selection of street dance crews as they prepare for the Red Bull Beat Battle.

Via personal interviews and intimate looks at the homes and neighborhoods of the performers, the film offers a view into the hardships and underlying philosophies rooted within each style. The interviews are broken up by oftentimes beautiful close-ups and tracking shots of the dancers as they prepare for their performances and demonstrate their jaw-dropping creativity and athleticism.

The African Cypher focuses on charismatic duo Movers and Shakers, whose personal style incorporates elements of juke, vogue and breakdance. Suffused throughout is piercing social commentary as they mimic acts of violence and retribution. For the Movers and Shakers, and all the other groups profiled, dance is more than artistic expression it is an act of defiance, empowerment and cathartic healing. –Kris Lenz

Death Metal Angola is in some ways exactly what it says on the poster: a story of how metal and hard rock surged through the underground of a war-ravaged African nation. It’s also the story of a woman named Sonia who runs an orphanage in Huambo, one of the cities hit hardest by the bombing. Since the mid-nineties, she’s cared for 55 children, some of whom are at the cusp of adulthood in the film. She is the documentary’s unifying presence, though it’s her boyfriend, Wilker, who steers the narrative as he organizes the first-ever metal festival for Angolan bands in Huambo.

An incredibly patient film, Death Metal Angola gives its characters space to tell their own stories, which are rich and contain many layers. The audience meets all the bands invited to play Wilker’s fest, musicians who explain that in metal they found a catharsis for the stress and pain of living amid violence and loss. We also meet many of Sonia’s children. In one particularly tender scene, Wilker teaches a 17-year-old boy how to play power chords on his classical guitar. In another, a stranger arrives at the orphanage with a nine-year-old boy seeking shelter. Sonia, though exhausted, agrees to take him in. The boy’s description of his stepmother’s abuse is one of the most chilling moments I’ve seen in film for a long time.

Death Metal Angola depicts a moment of powerful healing at its climax, Wilker’s festival. The camera pauses on two men crying, as though they had finally, after a decade, found the music that would let them make sense of their city’s past. It’s a triumph rarely found in the documentary genre, a fitting resolution to a deep and powerful story. –Sasha Geffen

Dario Argento’s horror masterpiece Suspiria is a fairy tale of blood, suspense, architecture, and colors. Oh, so many colors. Adding additional color to the evening was a live score of Claudio Simonetti’s Goblin, which is essentially the Italian prog-rock band Goblin missing everybody but Simonetti. That group scored Suspiria, in addition to several other Argento films in the 1970s. Simonetti was the group’s mastermind, so having him at the Metro was enough to build excitement for the surrounding fans of giallo horror (besides, the actual Goblin just played the Metro last Halloween).

The band was split into pairs, playing off each other on opposite sides of the stage. This left the audience with an undisturbed view of Suzy (Jessica Harper) as she tries to figure out what the hell is going on at her ballet school, a place where people do more than pirouette- they get hung, stabbed, caught in barbwire, and blind faculty members get eaten alive by their own seeing-eye dogs. Needless to say, not many (if any) children were in attendance. 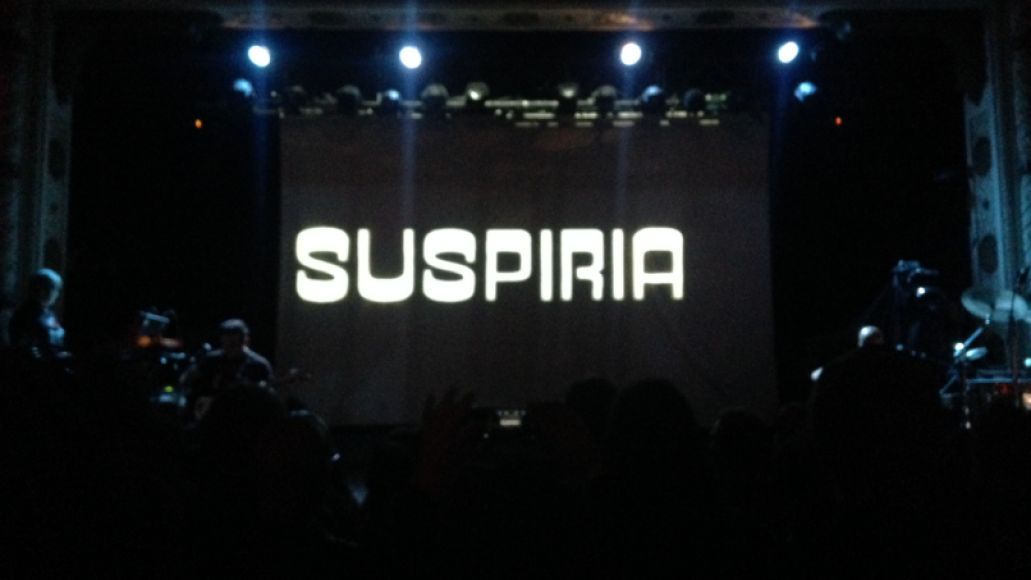 Having Simonetti and company on hand to provide the music made the experience of watching the film that much greater. Suspiria’s score is a classic, so whenever Simonetti’s keyboards floated out of the Metro’s speakers, the crowd went wild. Unfortunately, due to its late start (10 p.m., pushed back from 9), the drinking started early and went late into the evening. Those there for the experience had to compete with “fans” shouting at the screen every once in a while, most noticeably a group that must have been excommunicated from California’s SAMCRO (Sons of Anarchy, anyone?).

These drunken bozos couldn’t kill the mood entirely. Simonetti reveled in the applause and cheers. The audience left creeped out (in a good way) and satisfied. Here’s to more live scores in the future. But might I suggest chairs for next time? –Justin Gerber