Welcome to Festival Outlook, a new supplemental column that will provide more in-depth analysis for the rumors found on Consequence of Sound’s Festival Outlook. In this installment, our hip-hop squadron, led by Mike Madden and featuring Brian Josephs, Pat Levy, Sheldon Pearce, and Will Hagle, try to figure out just what fractured the relationship between the genre and music festivals nationwide.

Sheldon Pearce (SP): I’m pretty sure we all saw how OutKast was received at Coachella in what was previously universally believed to be a highly anticipated reunion show after years of inactivity. OutKast is one of the greatest rap groups of all time, so the lackluster response raises questions relevant to this discussion: Has hip-hop lost its live charm in the EDM era? Have high-energy, rave-inducing dance acts made big hip-hop festivals obsolete? Hip-hop shows are notorious for under-performing and are much maligned for everything from presentation to sound quality. Are high-production affairs like Tomorrowland pushing rap off the festival circuit?

Brian Josephs (BJ): I’m sure hip-hop festivals have lost their charm, but it’s not entirely because of the EDM era. It’s rather about the era we live in. For one, a lot of hip-hop shows are more simplistic in nature, comprised of a DJ on the 1s and 2s/turntables and a rapper performing the lyrics — sometimes not even in their entirety — with their entourage backing them. A lot can be said about how it’s impossible to replicate that lived-in, interpersonal feel through an iTunes playlist. At the same time, there’s a lot that can’t be said. This sort of experience is something that has to be attended to understand fully. 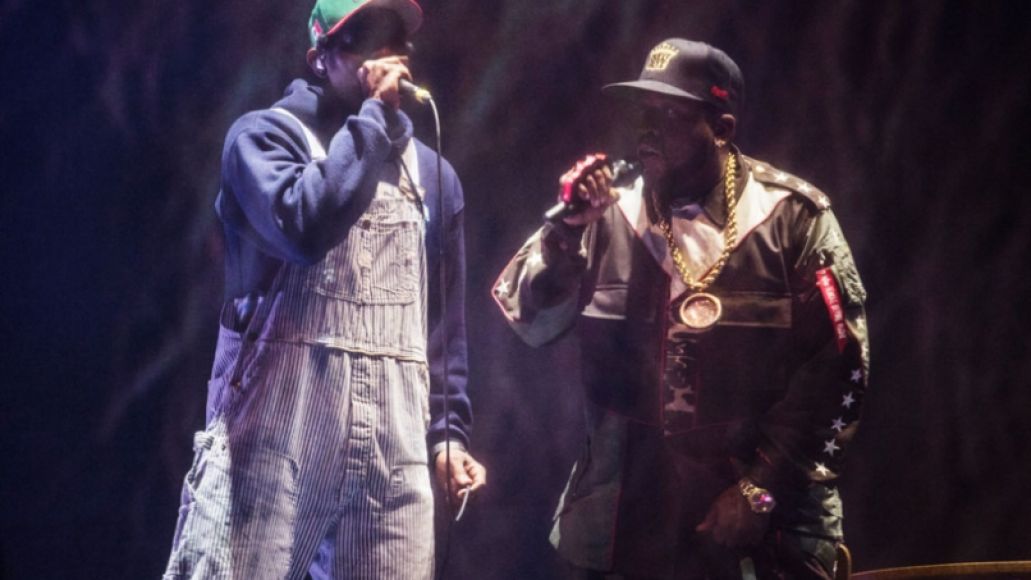 BJ (cont.): The thing is — as a millennial — why am I spending money when I’m perfectly fine watching a YouTube stream or a recording from the comfort of my own bed? Secondly (which sort of speaks to EDM as a genre now that I think about it) is how this is a generation that’s sort of accustomed to getting its thrills on demand. For instance, I could imagine someone foregoing listening to Aquemini in full just to grab the album’s best tracks. Why use up 60 minutes — a worthy 60 minutes, mind you — when I could just put “Rosa Parks” or “Da Art of Storytellin, Part 1” on repeat? I already have this almost mythologized image of this artist, and it’s not too easy to bring me out of that bubble. 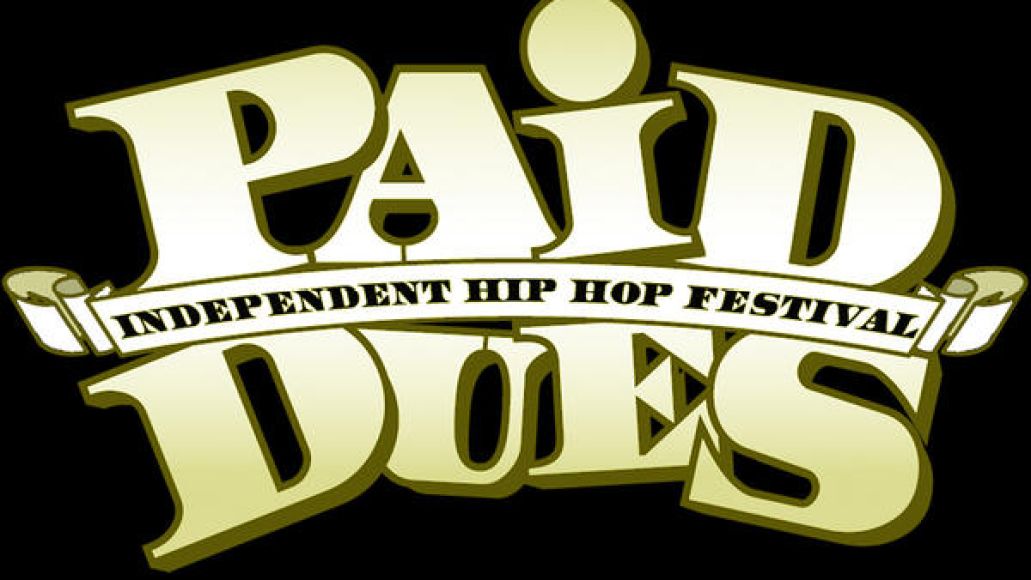 SP: Right on cue, Murs announces Paid Dues is cancelled this year. Hip-hop festivals may be going extinct. Brian, you make a lot of great points, particularly on how rap shows aren’t conducive to the evolving musical culture and how the audience now receives and processes information with shorter attention spans and higher expectations than ever in an era where you can beam basically anything directly to your cell phone. It’s worthy mentioning, though, that other  genre-specific festivals aren’t folding with the same regularity as rap festivals and that EDM festivals are essentially thriving. Is rap really the only genre plagued by this issue? If so, there must be a deeper rooted problem here; one that pertains less to an ideological shift in the way we believe we should consume media — since other genres exist within that same musical culture and have adapted. Perhaps the problem is simply that the patented formula for rap shows has gotten stale and that festival blocks filled with rap sets are repetitive affairs that can no longer draw crowds because of audience fatigue.

Pat Levy (PL): I think at a certain point it comes down to an over-saturation of the same artists. At some point, as blasphemous as it sounds, people will get tired of the Outkast reunion festitour. I’ve seen Kendrick Lamar six times, five at festivals. There’s so much rap that exists almost entirely on the Internet, music made by artists who might tour once or twice a year to a bunch of dingy clubs so they can pay their rent. Why aren’t there more opportunities for these semi-underground rappers to make themselves known on a larger stage? Bonnaroo’s lineup this year, which is amazing, still doesn’t have any rappers below Pusha T, and he’s basically in the middle of the lineup. The bands that make up the undercards of these enormous festivals always either progress up the lineup in future years or fall off entirely, but there’s always an opportunity for advancement. If we see fests take risks on rappers like Antwon, Rome Fortune, Cities Aviv, Lakutis, musicians with loyal followings and track records of making great music, then maybe the organizers would see the merits of booking smaller hip-hop acts. 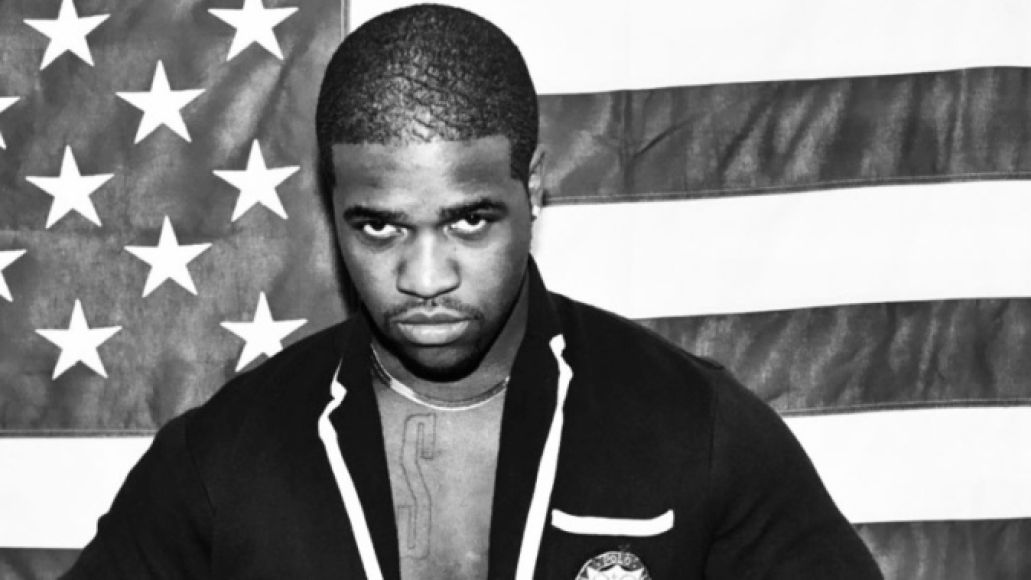 I also think the crowd that modern hip-hop shows attract, at least at outdoor music festivals, can sometimes make the shows hard to attend. I’ve been to rap shows at fests where I struggled to see any POC in the see of white frat boys in snapbacks and lacrosse pennies. I love A$AP Ferg, but I know that show at Bonnaroo is going to be full of shitheads, because his music doesn’t appeal to a niche audience like most hip-hop used to, but rather reaches a much broader audience because of the undeniable fire beats and A$AP association. While I’ll cede that EDM seems to be taking the title of Official Greek System Soundtrack from hip-hop, it doesn’t change the fact that every Das Racist show I went to was 1/2 really cool people and 1/2 shitfaced frat dudes who liked “Combination Pizza Hut and Taco Bell”. I honestly don’t see hip-hop moving away from this trend any time in the next few years, but I think it’s something that everyone is painfully aware of, and it adds an odd stigma to a lot of live shows as a result. 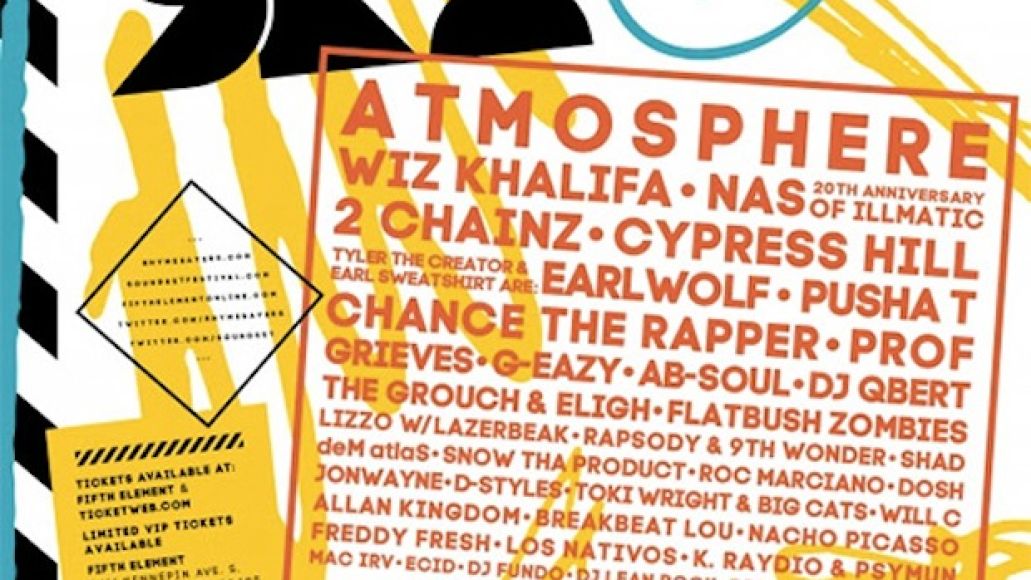 Michael Madden (MM): My perspective might be misguided because the only rap-exclusive festival I’ve been to is Soundset in Shakopee, MN. Because the fest was started by Minneapolis’s Rhymesayers Entertainment, it has an incredibly enthusiastic homegrown audience, even as mainstream artists bump the label’s indie types down the bill. That’s a rarity, though. I do think the festival environment inspires artists of all stripes to perform well in hopes that they’ll garner new fans, just because there are so many people in attendance. That’s refreshing given that smaller shows seem to be an afterthought for many rappers, merely a way to make money. Who even rehearses? Meanwhile, EDM festivals are a phenomenon not just for the music but for the entire experience. Rap shows don’t normally have that holistic appeal, unless we’re talking about Yeezus.

Will Hagle (WH): I agree that EDM festivals are the main genre-specific events that are thriving right now. Electronic music has also become increasingly integrated into the major festival circuit, though, with Coachella’s Sahara tent and Lollapalooza’s Perry’s stage growing exponentially in the past few years.

I think a major reason hip-hop festivals aren’t as prevalent anymore is because hip-hop artists, like their EDM counterparts, continue to be added to the lineups of major festivals. Outkast aside, all of the big festivals this year have enough rappers on the bill that — if you stripped away all artists of other genres — could potentially be the lineup for a strong stand-alone hip-hop festival. Governer’s Ball alone has Ratking, Run the Jewels, Chance the Rapper, Childish Gambino, J. Cole, Tyler, the Creator, Earl Sweatshirt, The Internet, and, of course, Outkast. That’s not an amazing stand-alone lineup by any means, but it’s a strong showing for hip-hop at a festival with Jack White and The Strokes as headliners. 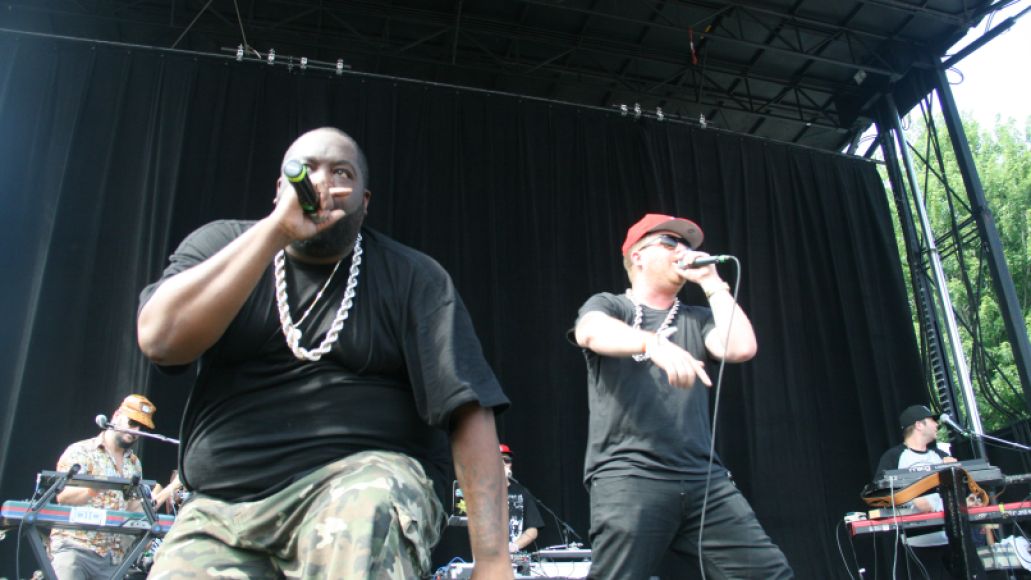 It’s sad to see Paid Dues and some Rock the Bells dates get cancelled, but it’s a sign that neither succeeded at being the premier hip-hop festival in the United States (Paid Dues for the underground, Rock the Bells for a combination of styles). Summer Jam sort of fills that lane, but it’s typically reserved for huge, mainstream artists. Even the Jay-Z-curated Made in America Festival features indie and electronic acts as prominently as hip-hop artists.

In Danny Brown’s recent interview with Tim Westwood, he referred to Coachella as the ultimate festival where everyone wants to play. That emphasizes that hip-hop isn’t completely removed from the festival circuit, it’s just integrated with every other genre. Maybe that’s a good thing. As Sheldon and Mike noted, hip-hop is notorious for lackluster shows outside of the club setting, and a hot day filled with rappers yelling too loudly over distorted beats isn’t something that’s worth a high ticket cost. Like everyone’s said, the truth is that hip-hop isn’t its own contained community anymore, and maybe it’s best when the genre’s artists worth seeing are slotted in alongside some diverse acts.

MM: Not only is rap far from self-contained, it’s also problematic that the genre is as segmented as any. Each of those Governor’s Ball artists Will just mentioned (including J. Cole) skirt rap’s prevailing stereotypes. In other words, they have crossover appeal. Now, imagine an all-rap equivalent of the coming Bonnaroo lineup, which is headlined by the likes of Elton John, Kanye West, Jack White, Lionel Richie, Vampire Weekend, and Skrillex. Those guys are all at different stages in their careers, with different levels of activity in the past decade. They also sound totally different. Let’s go a little crazy and formulate a similarly diverse rap fest: De La Soul, Master P, Future, 50 Cent, and Mac Miller. Such a range would be incredible, but with so many other factors in play, what (realistic) lineup is a guaranteed success? Waynestock was fiction. 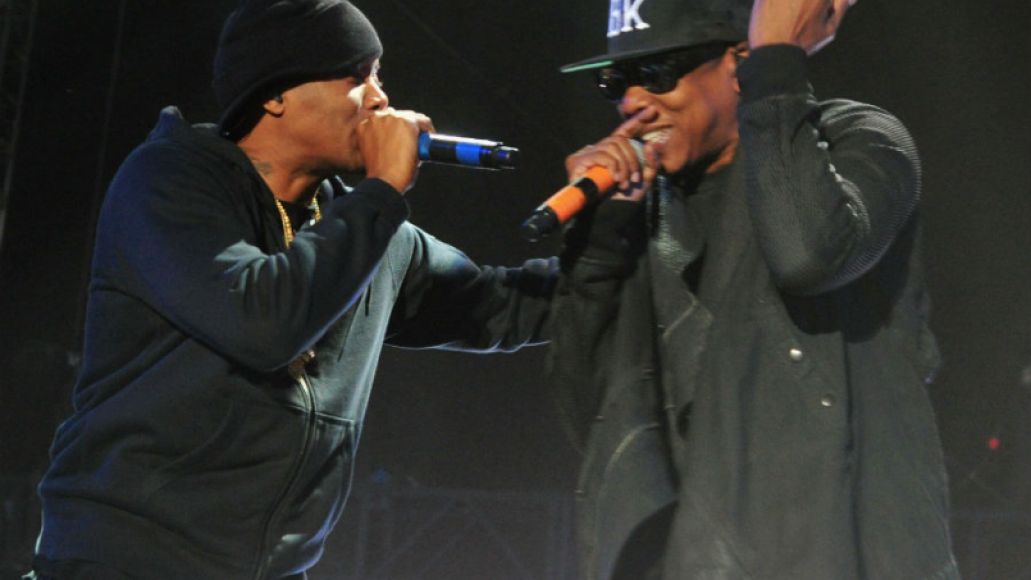 Mountains of money are also at stake, then. In announcing Paid Dues’ cancellation, Murs cited low funding from the event’s partners. The deficit — which, considering Paid Dues the name, is all too ironic — presumably had to do with underwhelming sales projections. I wish everyone could afford to spend a couple Benjamins or more on a festival getaway and get lost amid seas of Jordans and satellite-detectable smoke clouds. It’s a beautiful thing that, from Burning Man to the Gathering of the Juggalos (another favorite of Danny Brown’s, by the way), humans enjoy sharing experiences with thousands of other humans, even when it means risking freakish sunburn. May we continue to do so until biological warfare makes it impossible. Personally, I have Soundset to look forward to, and it might be the most exciting lineup yet: Nas, Pusha T, EarlWolf, Ab-Soul, and I could go on. We can only hope that the less fortunate festivals reverse their luck. We’ll see what Murs and his crew plan for next year, when they intend to return.

BJ: To speak to Will’s point, I think this newfound, symbiotic relationship between hip-hop and mainstream festivals has sort of become a new frontier — which is bittersweet, in a way. From a marketing perspective, you’d want the genre that’s taken years to built its legitimacy as an art form and a brand to get such exposure on a national stage. A lot of talk surrounds OutKast’s Coachella performance, but look at Nas’ appearance. He performed the entirety of Illmatic and had the crowd rocking with him for the most part. Mind you, back in 1994, this album wasn’t really that big of a seller despite the critical acclaim. But whether it’s the hip-hop performer’s fault or general disinterest, this trade-off of a more niche crowed for a wider audience doesn’t necessarily solve the widely perceived flaws of a hip-hop show. Guess times are a-changin’.

Where Are All The Hip-Hop Festivals?