Despite nasty rumors of poor sales and general grumbling about high ticket costs, Jay Z and Beyoncé’s co-headlining On the Run tour is on track to be record-breaking. According to a report by Forbes, the 20-date stadium tour is estimated to gross $100,000,000, which wouldn’t even crack the top ten of all-time gross; It would, however, average out to $5,000,000 per venue, making it the second highest earner based on that measure. The only act to earn more per venue would be U2 during their 360 trek, which saw them grossing nearly $6.7 million each show.

Misinformation about the tour’s lagging sales seems to have originated from a Showbiz411 post pointing out how many tickets were still available just weeks out from the June 25th kickoff at Miami’s Sun Life Stadium. And while it’s true many of the shows likely won’t sell out (a quick check shows plenty still available in Miami), Forbes states that 95% of seats are in fact sold out in primary markets. With the undeniably high price of tickets — some gigs have close seats going for over $500 and front row/pit “experiences” going for $1,950 — 95% would still bring in huge gross.

Furthermore, as Forbes points out, people tend to purchase tickets in two waves: “At the initial onsale and then in the 72 hours before an event. With over 95% of the tour already sold out on the primary market, there’s a fair chance the the tour’s sell-through number could bump up against 99% when it’s all said and done.”

High prices and a limited number of stops assuredly will lead to On the Run being a historic, um, run. Only one other tour in the top 10 highest per-show grossing tours had under 100 dates, Madonna’s Stick Sweet tour. While that tour already sits at the fifth highest grossing ever, the exclusivity launches it to second on the per-venue scale – that is until the final numbers for Jay Z and Beyoncés joint jaunt come in.

Below, check out a list of the top 10 highest grossing tours of all time (with On the Run thrown in for comparison), followed by the complete Jay Z/Beyoncé itinerary. 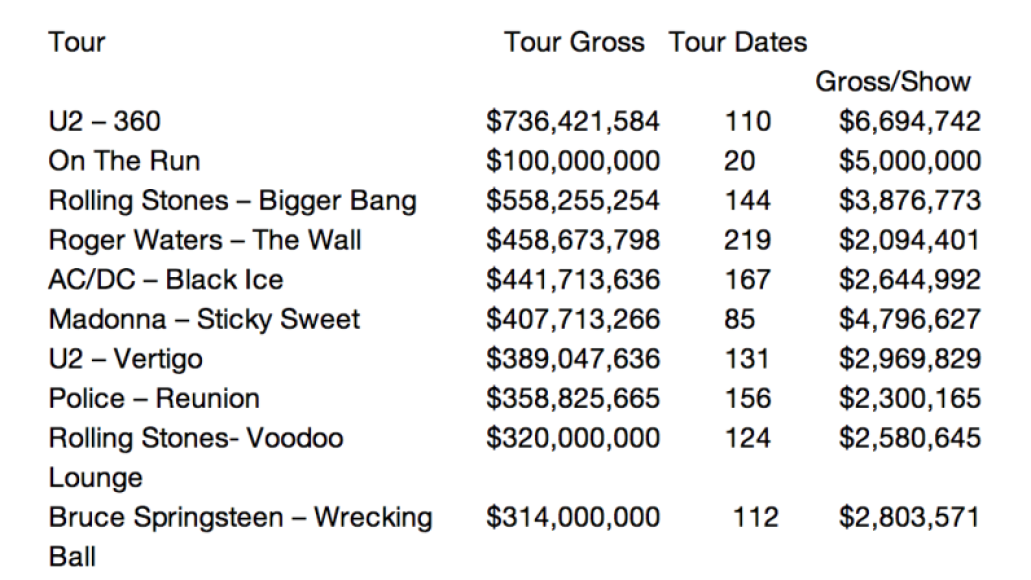