If you’re inclined to believe rap videos and Forbes lists, then emcees may be the most financially well-off musicians in the world. But whereas Dr. Dre stands as the lone hip-hop billionaire (perhaps until Jay Z’s soda line hits shelves nationwide), there’s another musical force that’s a fiscal heavyweight in its own right: EDM.

With countless EDM and electronic music festivals taking place across the globe, DJs achieving massive popularity both on the charts and streaming services, and deadmau5 driving tricked-out Ferrari’s, it’s fairly easy to see that EDM is both a cultural and economic juggernaut. But just how much power and influence does the scene have exactly? Try $6.2 billion worth.

According to a recent report issued by the International Music Summit (via Billboard), that staggering amount is how much the entire global EDM industry is valued at. That includes revenue generated from festivals ($1.03 billion); worldwide club dates ($2.4 billion); streaming/video services ($600 million); Soundcloud streams ($140 million); and the sale of DJ software and hardware ($360 million).

The IMS report also indicates that EDM was the only musical genre to post year-over-year sales gains in 2013. In addition, the top 10 DJs on Forbes’ 2013 Electronic Cash Kings list pulled in a combined $225 million, effectively doubling the earnings posted back in 2010. (Check out a more detailed breakdown below.) 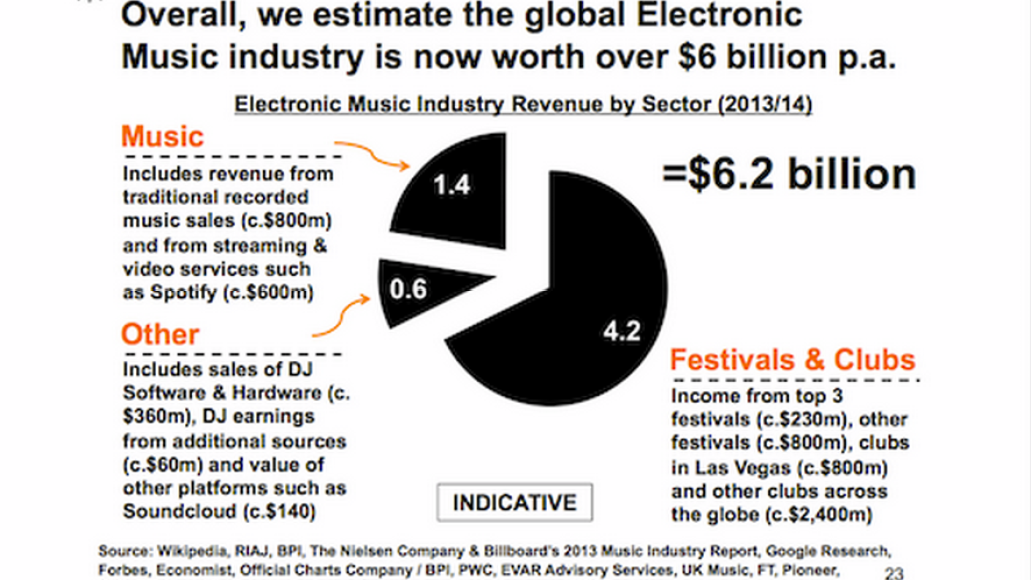 So, the question begs: how do EDM’s counterparts fair? Well, for comparison, last year’s 10 highest-earning musicians pulled in a combined $216,569,875, $10 million less than EDM’s top 10. That means that acts like Madonna, Bruce Springsteen, and Roger Waters were out-earned by the Aviici’s, Zedd’s, and David Guetta’s of the world. No doubt helping the EDM community is a reliance on revenue streams outside the norm. Whereas EDM earned a collective $140 million from Soundcloud, YouTube phenomenon PSY earned just $870,000 from his 1 billion hits. Oh, and if you were wondering, the five wealthiest rappers are valued at a collective $2.07 billion.

As impressive as the $6.2 billion price tag is, some industry insiders think that figure is slightly conservative. During last week’s annual EDMbiz conference in Las Vegas, Kraig Fox, a senior managing partner at the Guggenheim Partners investment firm, said EDM’s advertising potential is vastly unexplored. “The $6.2 billion may be what’s spent on tickets or clubs or drinking, but I view it as the millennial industry in general, and advertising toward that audience. You add that to that $6.2 billion and it’s something much bigger that you’re playing for.”

Of course, so much of the revenue-generating power lies in the makeup of the industry’s core audience. According to EDMbiz, EDM fans are “predominantly millennial, under-25-year-olds who are 50% more likely to buy energy drinks and over-index in their ability to set trends than any other age group.” In addition, they live outside rural areas like New York and Miami; for instance, the sixth largest EDM market is in Asheville, NC, which is a higher index than even Chicago and Los Angeles. The top five is rounded out by Boston, the Bay Area, San Diego, and Denver.

And here’s how those EDM artists make all that cash-money:

The EDM industry is worth how much?!?!