After winning a Grammy, most people go glam, but Kimbra went to the sticks. After snagging an award in 2013 for her work on Gotye’s “Somebody That I Used to Know”, the New Zealand-born musician moved to a sheep farm on the outskirts of Los Angeles. Why? After the clamor of the awards show, she wanted to find solitude in order to focus on writing the follow-up to Vows, her 2012 debut. In the stillness of her secluded Silverlake cottage, Kimbra wrote and recorded rough demos for most of the songs on her sophomore album, The Golden Echo, which comes out today, August 19th.

The resulting record, though, is anything but still. Instead, it’s shot through with funky psychedelics and intermingled existential and adolescent questions. At just 24, Kimbra sometimes sounds as though she’s remembering a time that never was. Bubblegum pop bursts into strands of twisted, retro R&B and electrified soul that can barely contain its own exuberance. I caught up with Kimbra, a true pop experimenter, to talk about the perils and pleasure of living on a sheep farm, Narcissus and the flower that inspired her album title, and how she views her signature personal style as a form of art in itself. 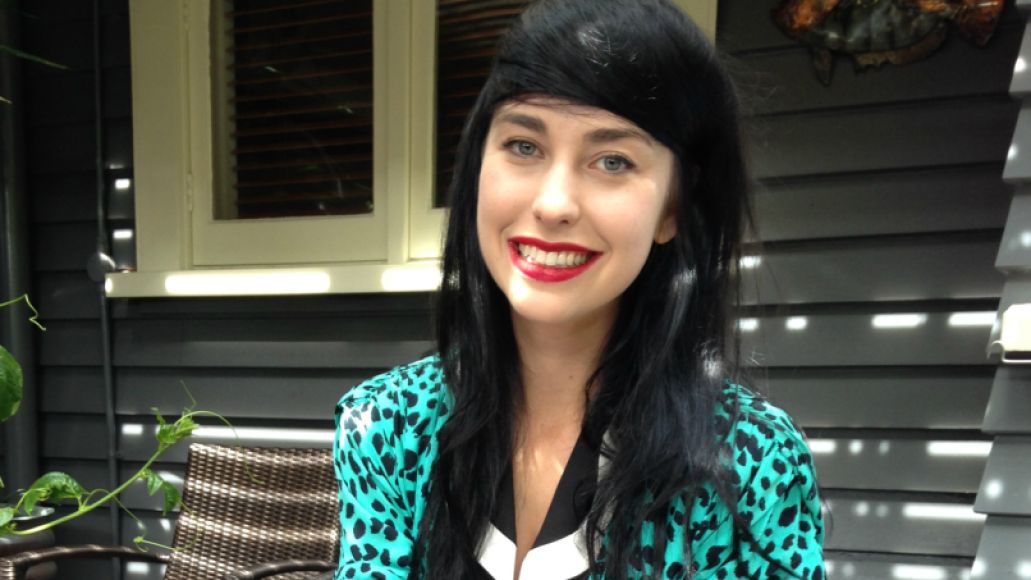 I heard that you moved to a sheep farm in Silverlake to work on The Golden Echo. What prompted that decision?

Yes, that’s the truth. I found it on Craigslist. I was here for the Grammys, and the day after that all winded down I knew I needed somewhere to root/ground myself again before writing another body of work. I didn’t really want to live in Hollywood or be around too much stimulus. I wanted to find stillness. So, I went to look on Craigslist and thought, “I wonder what’s out there?” Then I saw this place that said there’s chickens! An outdoor kitchen, you cook your eggs … and I thought, “Wow, this is me!” I just loved the vibe. I lived out the back and had a lot of privacy. I wrote the whole album there, really. It was a big part of this record in a way, not that it’s like a country record — but just in the sensibility that it was something very different than what I had been used to on tour.

Are you still living there right now?

I only just moved out, actually. I’m not far from there, but I decided, you know, the record is done. And I also decided that I actually want a dishwasher [laughs]. I was kind of done having the outdoors as my kitchen … everything was done in a tub.

Were you just writing songs out there or recording them as well?

I worked out of the farm for a long time. I started a lot of it there, and I wrote a lot of the songs there and did a lot of pre-production there. For a lot of these songs, I would pull together most of the sounds and all of the melodies and lyrics in advance before I headed to the studio in Burbank, which was El Dorado. It’s an amazing studio that Rich Costey works out of. It wasn’t until about June last year that I decided to commit to say that is the place where I will finish the record and track anything that needs to be redone. But a lot of elements on the record, you know, are from demos, and Rich would listen to it and say, “You know what? It sounds great!” Even though it’s kind of a rough sound, he was very open to keeping these very raw elements in place and only just coloring in the holes. So, a lot of it was done in advance on the farm. And then I wrapped everything up and completed it at El Dorado. 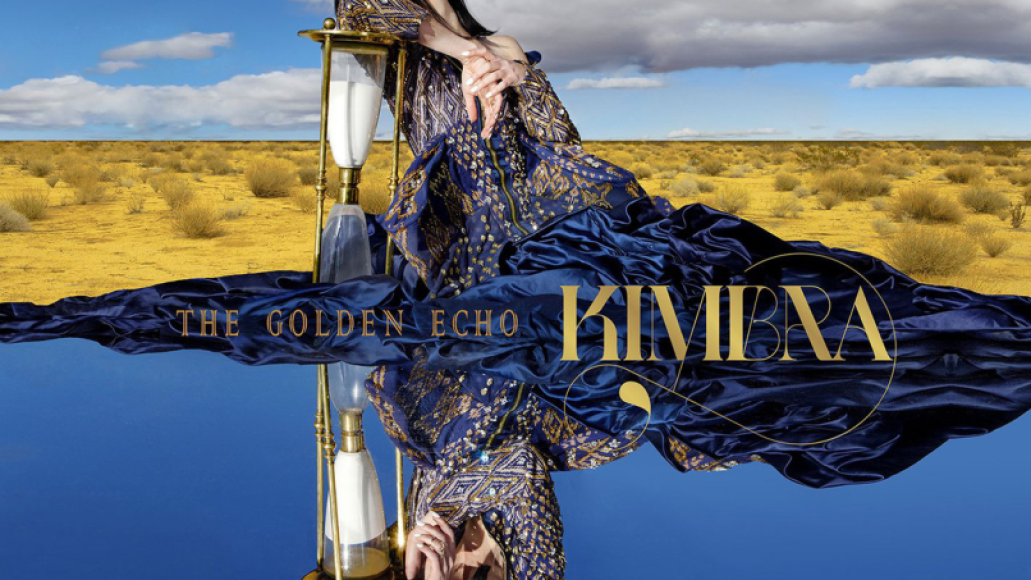 What was the inspiration behind the album’s title? The phrasing of it is very specific: The Golden Echo. It sounds like there’s a story there.

I’m glad you picked up on that — there’s quite a story behind it, actually! The first record, I looked at the songs and I thought they all have something to do with promises, and I thought Vows was nice and liked the way it sounded — it summed it up. With this record, on the other hand, it’s amazing. I went to sleep one night, and I was in the space between dreams, and I saw these words imprint themselves very strongly inside my head: The Golden Echo. I thought, “What does that mean? Is it a song or an album that I’m remembering?”

So, I went to Google, and it pulled up some amazing imagery. It took me to a flower, and the flower is called Narcissus Golden Echo. It’s a beautiful daffodil that reflects up to the sun. And it says in the Greek myth of Narcissus that he is looking at a reflection of himself in the water, and he eventually dies and so does the yellow flower. And so, of course, that took me to the Greek myth of Narcissus, and that is a theme that shows up not only on the album cover but also throughout the record. To me, it represents these two energies that show up on the album. Of course, Narcissus is that part of us that is very self-focused. But The Golden Echo also represents the part of us that is tuned into the whole and listens very deeply and calls outward — out to something higher or out to be connected again to mature itself. That’s the album arc, and it goes between those two worlds. We’re so caught up in ourselves that we often don’t take the time to listen deeper. The Golden Echo summed that up for me.

Let’s talk about your latest single from the record, “Miracle”. How does that tie into those larger album themes?

This song is really a song about joy and celebration and the sense of having your faith restored in life and love again. For the record itself, The Golden Echo, there’s a lot of different themes and ups and downs. But this song, lyrically, is about what it’s like to be in a situation that makes me feel one way, and then someone comes along and shifts your perspective on it and you see it in a new way. It’s very much like an intervention of some sort — like a miracle. It plays with reality and shines a new light on something.

It reminds me of Michael Jackson and Hall & Oates. It has that very free, sweet ’60s and ’70s pop sound on it.

It’s interesting, because Michael Jackson’s drummer actually did work on that song. So, the main drummer that Michael Jackson worked with was John Robinson. He played on Off the Wall, and he played on Thriller as well. He’s actually one of the most recorded session drummers. He’s just one of those guys. He’s played with Chaka Khan and a lot of amazing acts. So, anyway, he came to play on that song, which was really incredible! That’s probably why you feel that undertone of that energy.

That’s incredible! I know you’ve been working with a lot of different musicians and collaborating with them for the record. Was anyone else working with you specifically on this song?

Yeah, so this song I wrote with Thundercat, and he’s on a lot of The Golden Echo. But he worked on this song along with Daniel Johns from Silverchair. Silverchair was like my favorite band growing up — they changed the way I thought about music. So, Daniel flew over to Los Angeles to work with me on different jams. Thundercat is from the funk world, and Daniel Johns is more spacey and coming from an almost grunge era. You know when you’re a kid and you’re bouncing on a trampoline, how you don’t know exactly why you feel so uplifted and inspired by that but you do? I thought, “Why don’t I try to channel that place in a song?” It’s amazing because it really did come together in a matter of hours. It just sort of fell out lyrically and everything, all the changes. There was a great buzz in the room of just not over-thinking things. The beat literally was just me on an iPad just doing a 2-4 “clack boom clack boom.” That was all we were responding to for the whole song. And I loved it being so lo-fi, but then we decided to kind of build on it. Then we got John on the drums, and the song started to evolve. But initially it was literally just Thundercat playing bass, the 2-4 beat, Daniel Johns on the keyboards, and me on melody. 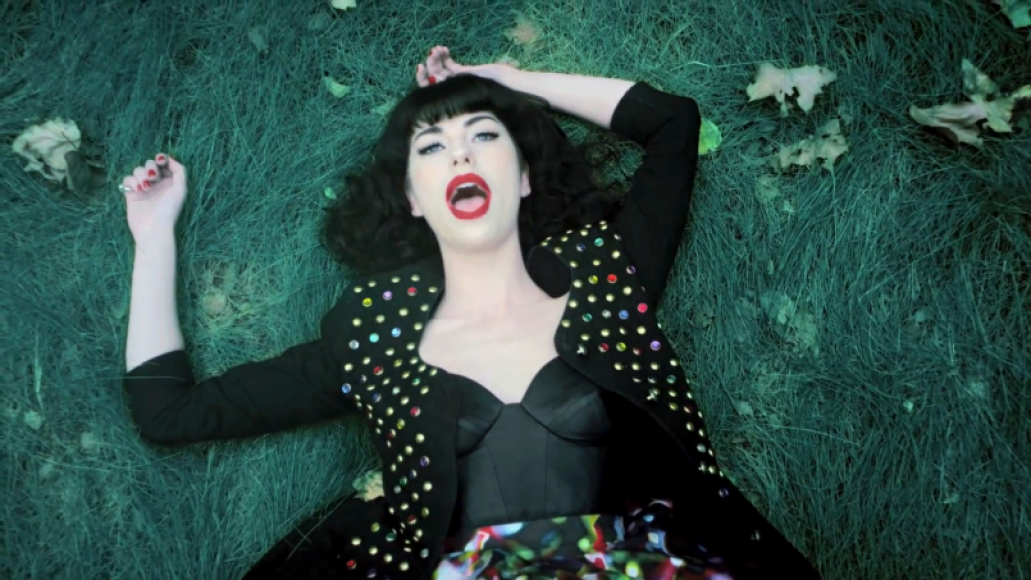 It’s hard to imagine you doing anything lo-fi at this point. Was there ever a point when you did? What was it like when you first began making music?

I was very young. Music is a language, and it comes to some people in time, and some people are speaking it from the word go. Melody and poetry were always strong parts of my childhood. They weren’t thought about. They were just ways of expressing myself. I learned guitar and was writing songs from about eight or nine, but when I picked up an eight-track at 15, things changed. That was the first time I found out about production and lip-syncing. And I was like, “Wow, I can double my voice?” That was the start of me really being fascinated with the technical side of music production.

It definitely makes sense that production was part of your music at such a young age. Was style always a big part of your life, too? Your personal style and aesthetic is eclectic but very inspiring.

I loved vintage shopping when I was young. I lived in a small town in New Zealand, and I would go to Salvation Army and pick out things. I loved to create shapes in over-sized dresses. But now I’m really lucky, and I get to work with some amazing designers. I really like to work with up-and-coming designers who think of fashion more like art. I don’t know too much about high-end runway fashion, and I’m not very interested in that. I like fashion and clothing that evoke an experience. And the stage is the perfect place for that. You get to kind of make a moment out of what you do. For day-to-day style, I wake up and think, “How am I feeling today? What do I want to express today? What do I want to give back to the world?” I think it’s a nice way of thinking about fashion — it also makes someone else happy when you walk down the street in an awesome, bright, yellow dress. I like that idea. It’s that same Golden Echo sentiment of giving back in some way. I like to think of ways to encourage someone else with every part of my life. Fashion is just one of them.