Since Relektor came out last year, the game has seemed to be about catching Arcade Fire in as small of a crowd as possible. With every awards ceremony, Coachella stop, or even the initial record release, opportunities would arrive to see the Canadian six-plus-piece in locations that serve as much to say “I was there” as to actually be there. But the best they might have been was amongst the most people, at Coachella, headlining in front of thousands, while plenty more thousands watched from home.

Arcade Fire are not a band to covet in tiny circles anymore. They are a band to share — to share freely — with as many fucking people as you can get together, all shouting the “wooooooah wooooooahs” of “Wake Up” together. So seeing them at the newly renovated Forum in Inglewood was fine. It was perfect. It was fitting. And for many, it was another special experience with one of the best bands of our time.

Reflecting (see what I did there) on Arcade Fire’s past adds credence to this, as they are not a band to be thought of as where you were when, but who you were with. The first time I ever heard them, my friend summoned me to his bedroom to play an illegally downloaded mp3 of “Rebellion (Lies)” and it was love. Their first shows as an internationally touring band are the stuff of legend, with flashlights handed out to the audience and motorcycle helmets and rafters being used for percussion. They toured with LCD Soundsystem and damn that must have been a show. I saw them at the Greek for Neon Bible and they turned the relatively large amphitheater into a church, and the deity wasn’t the band, but our shared experience. I saw them headline Bonnaroo and Outside Lands, and I remember the moments with the people I shared as I do the actual performance. 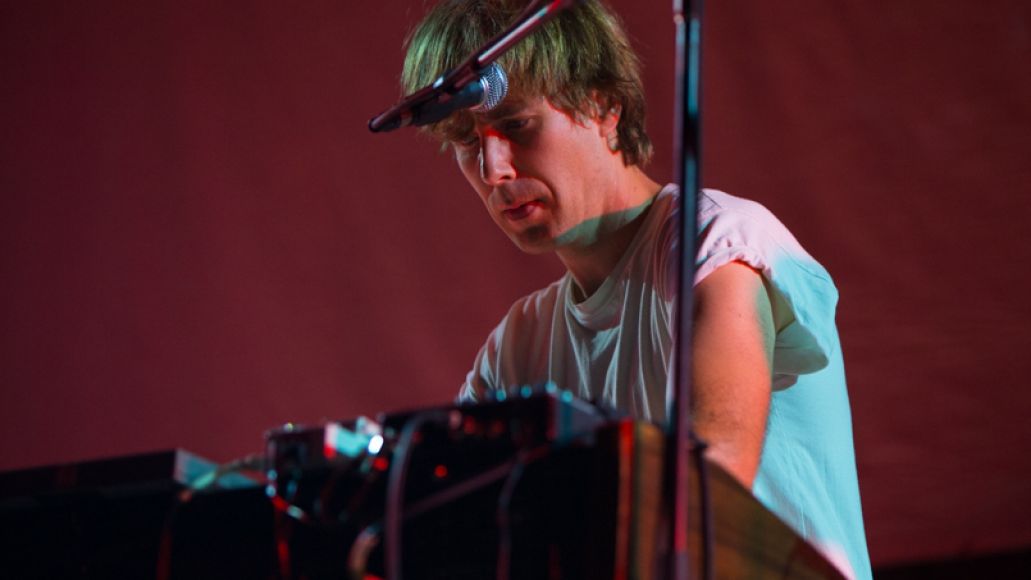 These are happy, wonderful snapshots in a life that isn’t always happy and wonderful. Their Coachella set this year was one of the single most poignant live music encounters of my life, and I don’t think I’ll ever hear “Afterlife” again without wanting to cry my eyes out. This wouldn’t have happened at a small club, or in my headphones. This was through sharing an event, something we forget to do as we tweet away the night at another concert for a band we don’t really care about.

Arcade Fire seems intent on making their concerts communal and meaningful. Why else would they ask The Unicorns to open, a band that had brought them on the road 10 years earlier when they were blips on the music radar? And for their part, The Unicorns were probably more professional and better sounding than they’ve ever been, proof of the wonder of what 10 years will do to you musicianship. Over the course of 50 minutes of little bullshit, the band played virtually every song they had, their focus undeniable when during second song “Tuff Ghost”, Alden Penner leapt onto the stage’s mini-catwalk to lay into a bass solo in perfect rock star pose. By the end of the performance, the wheels were loose and the set time had gone on past its intended finish, but for the first performance in a decade, it’s hard to call The Unicorns’ set anything but a satisfying success. 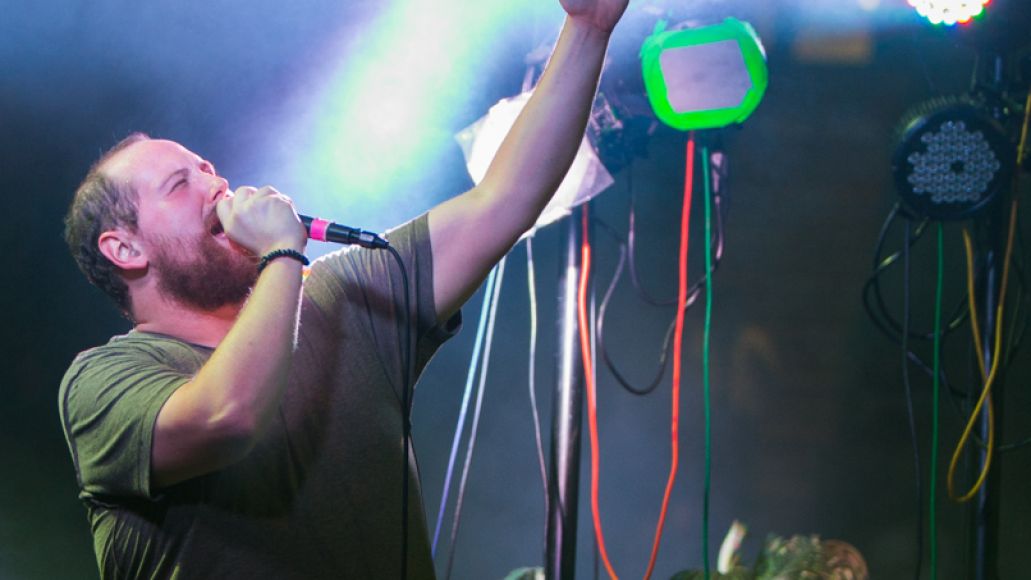 Even better was Dan Deacon. Anyone that has seen the Baltimore electronic wizard live knows the score. Deacon tries to make everyone a willing, or unwilling, participant. Set up on the satellite stage, an inspired decision that meant no break in action for the entire night, Deacon was tasked with bringing his audience participation-demanding show to an arena. And the crowd was game. The dance contests were met with exuberance, and Deacon couldn’t shield his surprise in just how easily people played along with his requests for standing in a giant circle or splitting the arena in half. This is how the set was supposed to go on paper and the fact that he pulled it off says as much for his charisma as it does for the fan that Arcade Fire attracts. Plus, Deacon’s music is sonically about as exuberant and uplifting as it comes, a subtlety that wasn’t lost on the thousands of onlookers.

But yeah, the night was Arcade Fire’s and rightfully so. With just four albums, they are able to put together a set that has no real lulls (subsequent album tours will lose some of the Reflektor filler but the album has at least four keepers, similar to Neon Bible). All the surprises have been seen by most at this point, with the set playing out almost like a copy of their Coachella set, with the spin being their masked mini-me’s goofing through a fake performance of “Sweet Child o’ Mine” while the real band dismissed them as “lame,” before going into their own lame cover of Jane’s Addiction’s “Been Caught Stealin'” and the intro (really well executed) of “Welcome to the Jungle”. 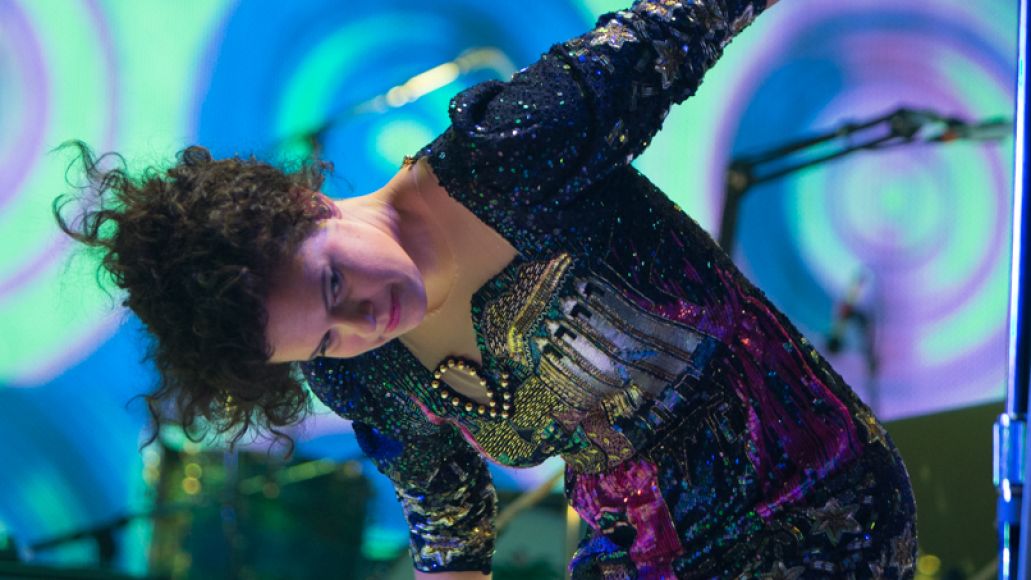 An arena is not the place to criticize the sloppy glee of “Here Comes the Night Time” or praise the black light ribbon dance Regine falls into during “Sprawl II”. It’s the place to marvel at how the Arcade Fire can turn a gathering into a fellowship. Stadiums don’t seem out of the question for them at this point, and if that’s the case, they should continue to focus on being looser, avoiding the same tricks night in and night out. (Pearl Jam and Radiohead are masters of this.) Not many bands can do that, but that’s the hurdle Arcade Fire must jump to become one of the all-time greats. They really aren’t far off at all. 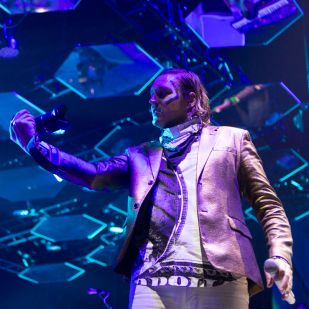 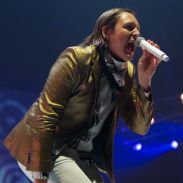 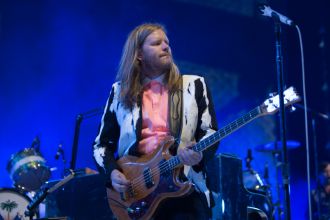 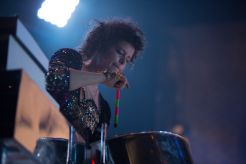 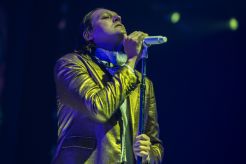 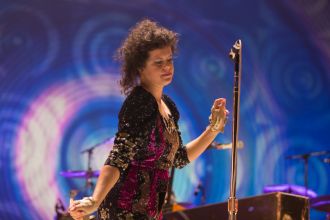 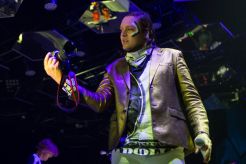 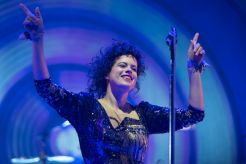 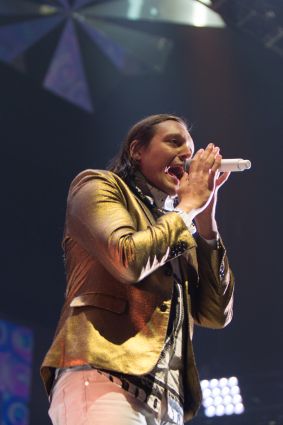 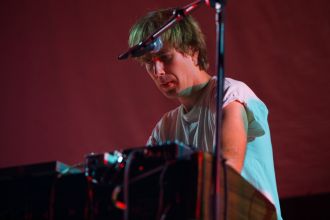 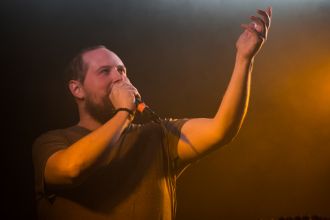