Last month, after a 35-year absence from the stage, singer Kate Bush launched “Before the Dawn”, a 22-date residency at London’s Apollo set to run through early October. For those without enough vacation or sick time to make the flight across the pond, reports have now surfaced of an impending DVD release that will chronicle one of Bush’s triumphant comeback shows.

News of the DVD surfaced after a ticket holder posted an email that they received from the Apollo (via Stereogum). In it, the Apollo’s staff explains that the fan’s seats would have to be moved to accommodate film cameras. The email also indicates that Bush’s decision to film the show appears to be last minute.

While the email doesn’t clarify which show is actually being filmed, given the email’s timestamp (Tuesday evening), it could be as soon as tonight’s show (September 10th).

Check out a screengrab of the email below. 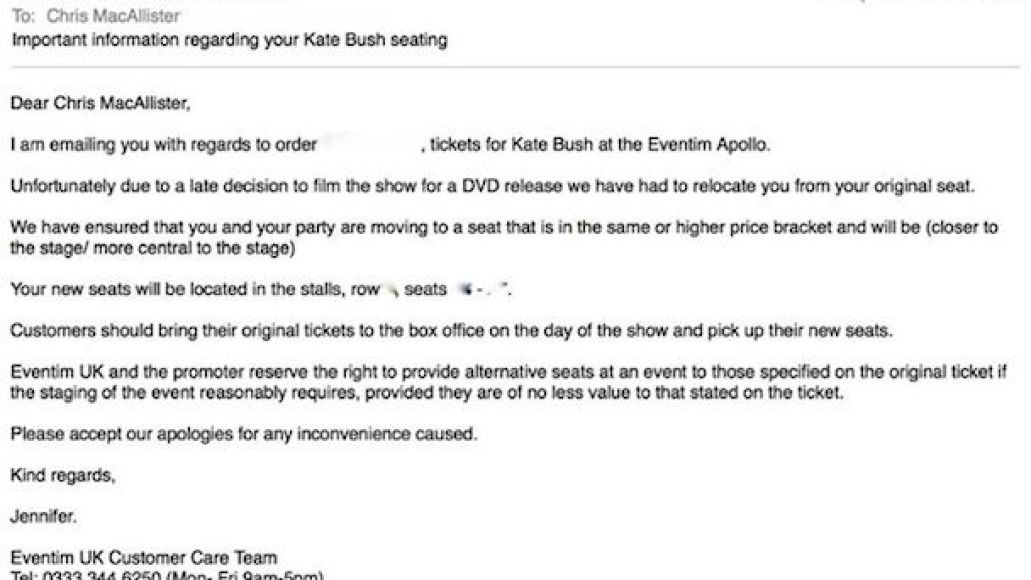 A mix of performance art and Avant garde theater, the setlist for Bush’s comeback residency has spanned her illustrious discography. That includes classic cuts like “Hounds of Love”, “Running Up That Hill”, and “Joanni”, along with full performances of “The Ninth Wave” (from 1985’s Hounds of Love) and “Sky of Honey” (from 2005’s Aerial). Bush’s performance has garnered rave reviews, indicating that after nearly four decades away, she retains her immense theatricality, dazzling emotionality, and poignant ability to enthrall a live crowd.

Below, watch a BBC review of the opening night. Bush’s remaining schedule follows.

Kate Bush's comeback residency could be released on DVD