The notorious London traffic was surprisingly good – well, it was a Monday evening, and the England football team was away playing Switzerland – yet it still proved a gig too far away to reach North London’s Union Chapel quite in time to sample the first course on a four-dish Indie tasting menu. As part of AIM’s Labelled with Love Festival, UK independent label Bella Union was hosting a characteristically idiosyncratic showcase at this iconic venue featuring four of its more recent signings. The reluctantly by-passed hors d’oeuvres were served up by Manchester, UK, duo, Bernard + Edith. In the unfortunate absence of a live tasting, this video may give a flavour of this intriguing pairing.

So, we arrived to find the Chapel stage unusually doused in mist as Arc Iris set up to deliver the next helping. Having caught the band deliver a full set on the May tour, tonight found them limited to seven songs, mixing a more challenging blend of new material and cuts from the debut album. Nevertheless, the music held a clearly open-minded audience attentive and was richly received. Visually the band also contributed to its otherworldly vibe with Jocie Adams’ serpentine in her gold lamé catsuit alongside her flamboyantly dressed keys player, Zachary Tenorio-Miller, and flanked by bejeweled cellist Robin Ryczek. Her equally fine percussionist, Ray Belli, meanwhile looked like he might be in Vampire Weekend. 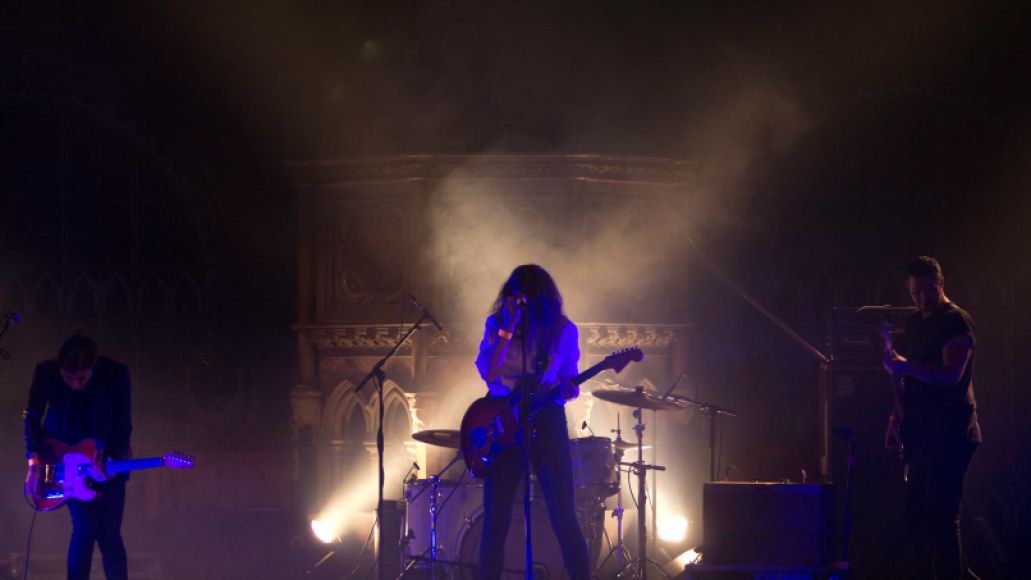 This is a band that really lives its music through a live performance; theatrical facial expressions accompany prodigious musicianship as the members skate across genres from cabaret to jazz, from folk to progressive rock. Once again an evocative “Lost on Me” and eccentric “Canadian Cowboy” hit high spots. The vocal harmonies Adams and Tenorio-Miller played with during the latter especially shone. The tender “Might I Deserve to Have a Dream” provided a restful antidote to the more frenetic feel of much of the set with the simplicity of one acoustic guitar and three flawless vocals setting a perfect seal on proceedings.

The third course off the pass provided a different, though almost as tasty, proposition. 2:54 is a new addition to the Bella Union stable ahead of the release of its second album. Sisters Colette and Hannah Thurlow take lead vocals/rhythm guitar and lead guitar/backing vocals, respectively, supported by the rock-solid bass and drums of Joel Porter and Alex Robins. The set majored on the new record with the seismic pounder “Scarlet” and slick, bass-heavy rocker “Sugar” thrown in from the debut. These girls do like their one-word titles. 2:54’s sound has roots in ’80s post-punk and ’90s shoegaze; it’s dark and brooding, hinting at menace yet lifted by Colette Thurlow’s smoldering vocals and Hannah’s staccato riffs allied to a penchant for picking deft lead lines high up the fretboard, as on opener “South”. 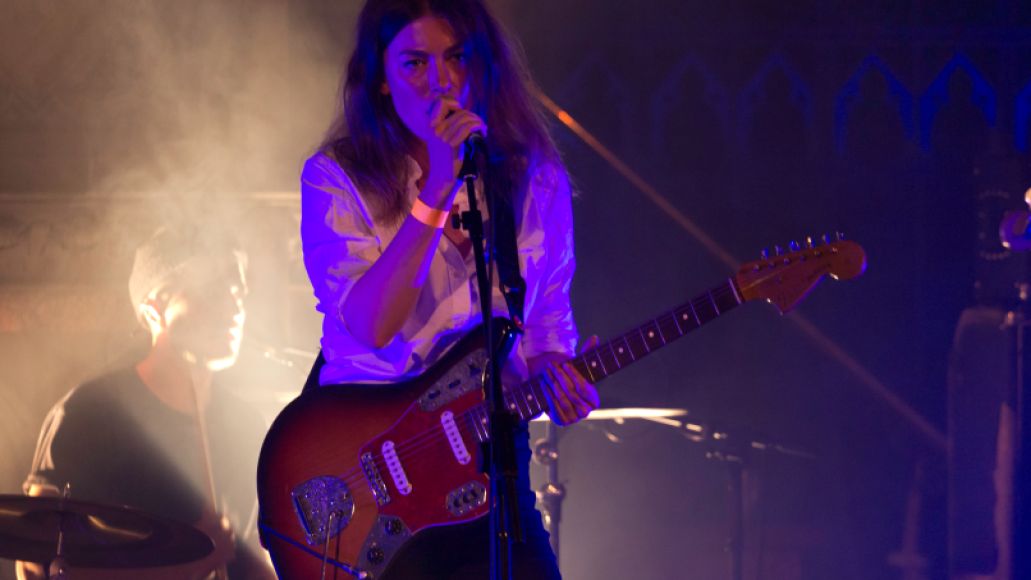 In contrast to Arc Iris’ dressing-up box, black is the new black for 2:54, relieved only by Colette’s simple, white blouse. The singer has a defined stage presence and the look of a film noir heroine about her, while at times the smoke machine threatened to consign her gifted sister unfairly to the shadows. The set closed with new single “Orion”, a strong anthem with hints of Siouxsie & the Banshees about it. The subtleties of Hannah’s lead fills and echoed backing vocals were a little bit lost in the mix, but there was no doubt that, alongside the earlier samples, the song augured well for the new album.

It fell to Tiny Ruins, the moniker of New Zealander Hollie Fullbrook alongside her two band mates, bassist Cass Basil and percussionist Alex Freer, to close the evening’s fare. Majoring on songs from Fullbrook’s second studio album, Brightly Painted One, there was a beguiling subtlety and simplicity to the set — a great foil to the earlier experimentation of Arc Iris and the intensity of 2:54. “Me at the Museum, You in the Wintergardens” was an early standout, its dynamics more pronounced than on record yet balanced by the delicacy of Fullbrook’s fingerpicked guitar and softly longing vocal. Her song style is rooted in the traditions of folk music but not bound by any obvious limitations of the genre. 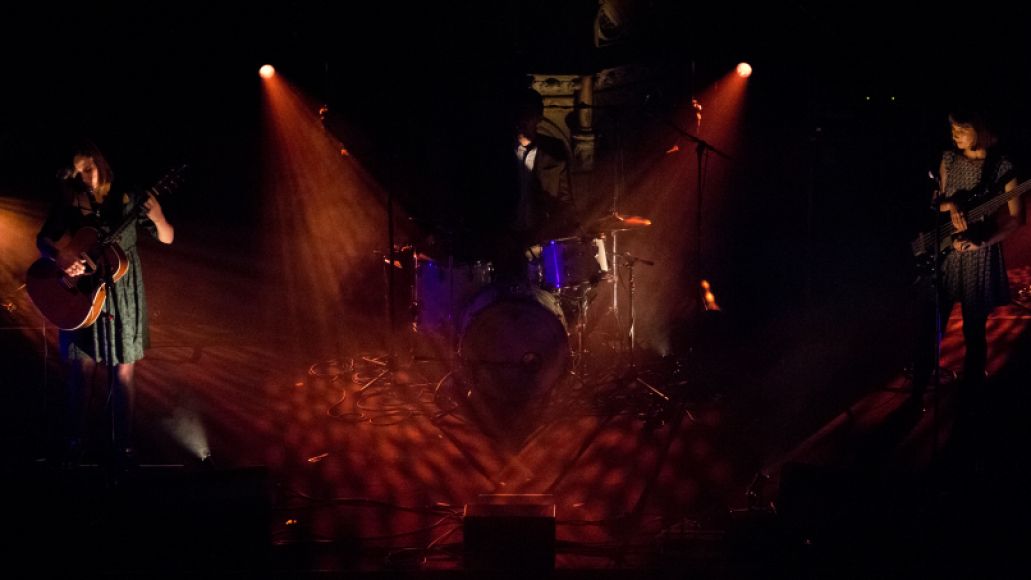 Fullbrook’s vocal was consistently clear with an underlying strength that balanced its delicacy. On songs like “Chainmail Maker” and “Reasonable Man”, it was tailor-made for the ultra fine acoustics that are the signature of this building. Her songs are neatly observational and quirky, like on “Ballad of the Hanging Parcel”, which documents a 10-year-old Fullbrook climbing out of her window onto a ledge to hang a rock on a string and then quietly convince her best friend it got there by magic. Coincidentally, this took place in Bristol, England, where the Thurlow sisters also grew up.

It’s hard not to be captivated by Fullbrook and her intimate brand of storytelling, as she draws you in with quiet charisma and charm. The songs are highly crafted and sensitively enhanced by Fullbrook’s own richly resonant guitar work and her skilful cohorts who contribute the right amount of styling and substance. All the artists tonight were fulsome in their appreciation of Bella Union, and every time the label was name-checked there was warm audience applause too. To this member, it felt like we were all part of a big family: disparate yet loving, tolerant and ever grateful. Tiny Ruins’ “She’ll Be Coming Round” provided a fitting closure to a fine evening of contrasts and compliments. 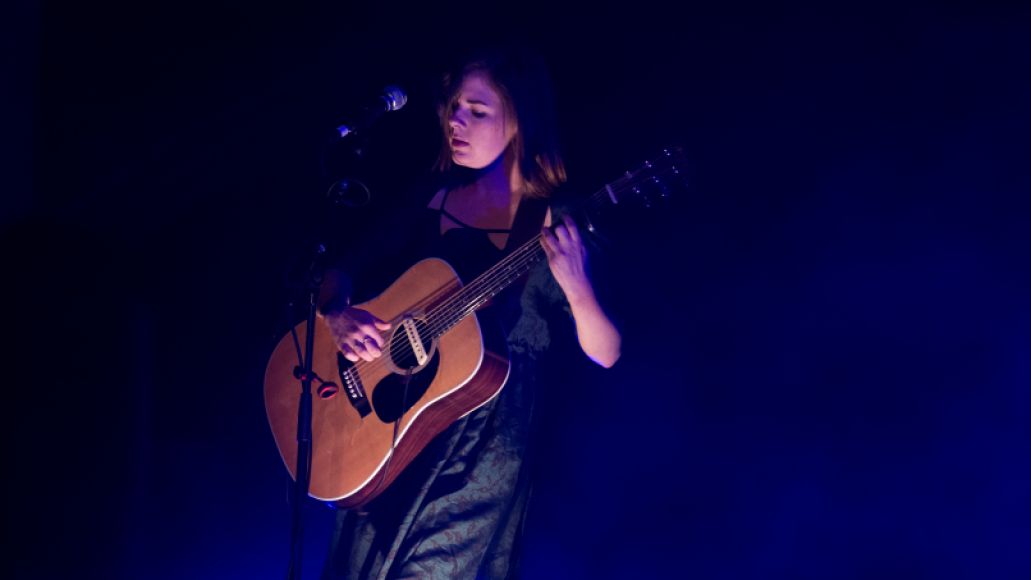 Tiny Ruins
Carriages
Me at the Museum, You at the Wintergardens
Chainmail Maker
Ballad of the Hanging Parcel
Reasonable Man
Dream Wave
Holes in My Pocket
Old as the Hills
She’ll Be Coming Round