Few musicians can be better categorized by the concept of “live music roulette” then Beck Hansen. I’ve pulled the trigger no fewer then five times, and in each case, the concert that followed was something wholly different from the one before it. In 2005, I saw college Guero party Beck blow the roof off the Santa Cruz Civic Auditorium. Then in 2008, I made the mistake of watching disillusioned festival Beck sleepwalk his way through a stilted set at the first installment of Outside Lands in Golden Gate Park. I’ve also seen acoustic, pensive Beck at the Bridge School Concert produced by Neil Young and it’s past my bedtime and the cold is warping my instruments Beck when he headlined last year’s Treasure Island Festival.

Some versions of Beck are infectious and wistful, while others are just downright disappointing. Heading in to his show to celebrate the rebranding of San Francisco’s Masonic Auditorium as a destination concert venue, I wasn’t sure which version the crowd was about to see. Part of this stemmed from the location of the concert, which was to take place in a Freemasons lodge that has now been repurposed as a music hall. The California Masonic Memorial Temple opened in 1958, and while it hasn’t been a premiere destination for artist’s of Beck’s caliber, I had seen a few odd shows there in the past.: Nick Offerman (better known as Ron Swanson) doing his one-man show “American Ham”, It’s Always Sunny in Philadelphia Live, Patton Oswalt performing stand-up, and even Feist when she toured for Metals.

The most noticeable difference at the new Masonic is that the ground level is now a tiered general admission pit, a move I’d wager was done to pit the Masonic against the Fox Theatre in Oakland, which reopened in 2009 and has since been a huge draw for touring bands that often skip San Francisco altogether now on their itineraries. After the customary half-hour wait for the lights to dim, Beck took the stage to thunderous applause. 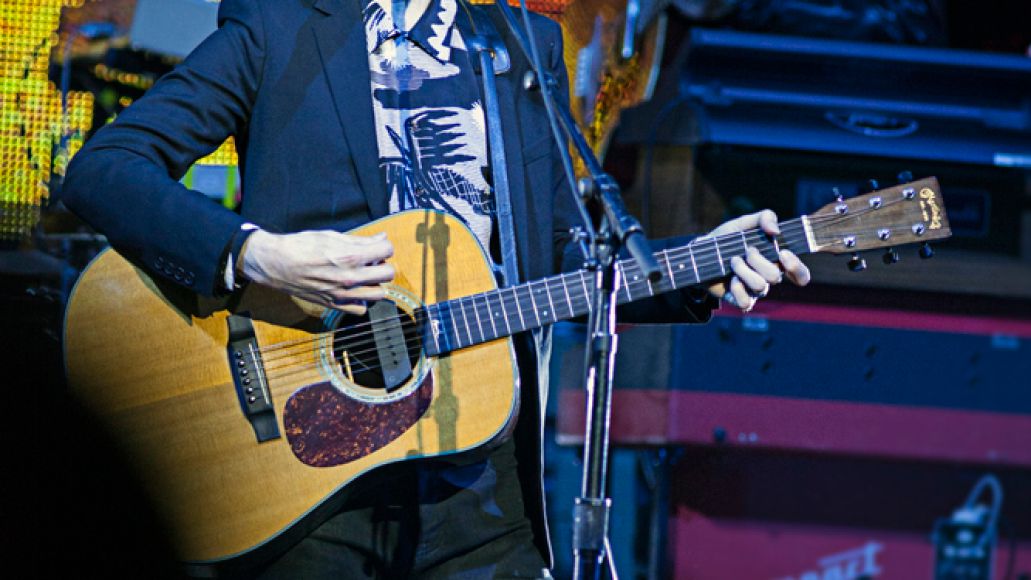 “We don’t have an opener tonight,” he confessed, pulling a reverse San Francisco (where often up to three opening acts push headliners into starting their sets at 11 p.m.), “so we’re just going to open for ourselves.”

With that, Beck launched into a lusciously melodic rendition of “The Golden Age” from 2002’s Sea Change. He followed with five cuts from his latest album, Morning Phase, a sibling to Sea Change in tone and subject. After apparently cutting his thumb on his harmonica rig during the opening number, Beck dashed to the side of the stage for some quick first aid.

“Sorry for the momentary triage,” he said when he returned to the mic. “This was supposed to be a quiet, acoustic set, and already we’re drawing blood on the first song. This is like an Ozzy Osbourne show. We’ll be doing a banjo version of ‘Crazy Train’.”

The band got in on the joke, launching into the opening chords of Osbourne’s hit. Their playful energy was evident all night. At one point, bass player Justin Meldal-Johnsen forced a kiss onto lead guitarist Smokey Hormel’s cheek during “Loser”. Later on, three members of the band got into a brawl, ensnaring each other and swiping at whichever instrument’s strings were closet to them as they fell to the ground in a heap of distortion during the crescendo of regular-set-ending track “E-Pro”.

Beck’s energy was fluid and fluctuated with the tempo of each song. For the night’s first 10 cuts, he was reserved, strumming an acoustic guitar and letting his passion speak through the gravelly voice that highlights his newest record. When the mood switched with an atomic rendition of perennial crowd-pleaser “Devil’s Haircut”, so did Beck. He left the stage and returned wearing a hat that would have made Walter White feel like Heisenberg again. [Side note: has the statute of limitations on Breaking Bad references expired? I hope not.] 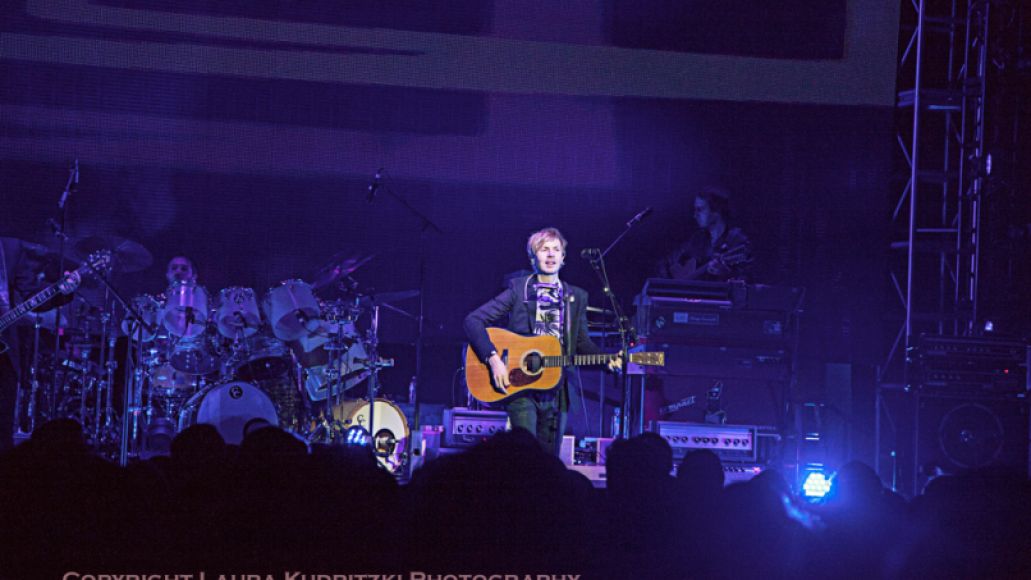 From that point forward, the night was high-octane, with Beck mugging across the stage, rapping the flurry of lyrics to songs like “Loser” and “Hell Yes”. The highlight of the evening may have come when he transitioned perfectly from “Think I’m in Love” off 2006’s The Information into a cover of Donna Summer’s “I Feel Love”. The talent of Beck’s fellow musicians made the track feel as if it was supposed to be a hybrid of the two songs — that there’s no other way it could possibly sound.

The band left after Beck took a roll of yellow crime scene caution tape and stretched it across the stage. When they quickly returned for their inevitable encore, they defied expectations by launching into a sprawling, nearly 10-minute version of “Debra” from 1999’s Midnite Vultures. Local landmarks and surrounding towns wove their way into the narrative, as did a snippet of Nelly’s “Hot in Herre”. Choice comments during this number included Beck’s assertion that “there’s nothing like a moist audience” and later on confessing, “I don’t have a dick in a box.” The night ended with an extended jam on “Where It’s At”, complete with band introductions and solos of their choice.

I’ve now played more live music roulette with Beck then there are bullets in a six-shooter, and while not every performance has been memorable, none will surpass his debut performance at the new Masonic. Few artists have the depth and diversity in their catalog to successfully execute a quiet set followed by a raccous electric set, but Beck’s genre-defying, generation-defining discography fit perfectly into the mold. Who knows what lies next for him, but for certain, what lies recently behind him is the best performance the Masonic is likely to see for a very long time.