The Hollywood Bowl saw two standing ovations on Thursday night, both of them well-deserved, the first coming a few minutes after Daniel Johnston sang the line “Oh that rock and roll, it saved my soul.” If you were familiar with Johnston’s story — from recording prolifically in the ’80s to gaining some notoriety through passing out homemade tapes to gaining more attention via a cosign from Kurt Cobain to having multiple psychotic breakdowns to spending time in a mental hospital to eventually returning to touring and success following the release of his story on film in the form of The Devil and Daniel Johnston — these words rang especially true. But hell, you didn’t need to know the story of Daniel Johnston to rise to your feet and applaud after his incredibly brave, emotional, heartbreaking, and inspiring set.

Johnston emerged with his five-piece backing band already onstage, needing a walker to make his way to the microphone. When he arrived to his station, he cordially asked for a chair (“this will work a lot better if you get me a chair”), to which a partly infuriating, partly hilarious series of mishaps played out where stage hands brought him out a stool, then a smaller stool, then a couple fans tried to hand him their own seats, and finally a chair was successfully placed behind him. The songwriter handled it all gracefully, and the second he was finally seated, the band kicked quickly into “Love Wheel” with a very punk abandon.

During his performance, Johnston shook uncontrollably, was appreciative between songs, with something childlike in the way he would say “Hollywood Bowl’ often, like thanking the crowd at the Hollywood Bowl was something he had practiced alone for decades. Maybe he had. For his final song, “True Love Will Find You in the End”, Johnston removed the microphone from its stand, so his shaking became an audible effect on the song, with the volume of his voice coming and going as the mic went further and closer to his mouth. Somehow, it added to the moment. And the crowd appropriately rose to clap as he left the stage, with one of the rare moments at a concert where the audience was not what really mattered in terms of the “experience.” The hope was that the set was everything Daniel Johnston wanted it to be, that the accomplishment would bring him peace to his weary mind, that rock and roll could really save his soul. 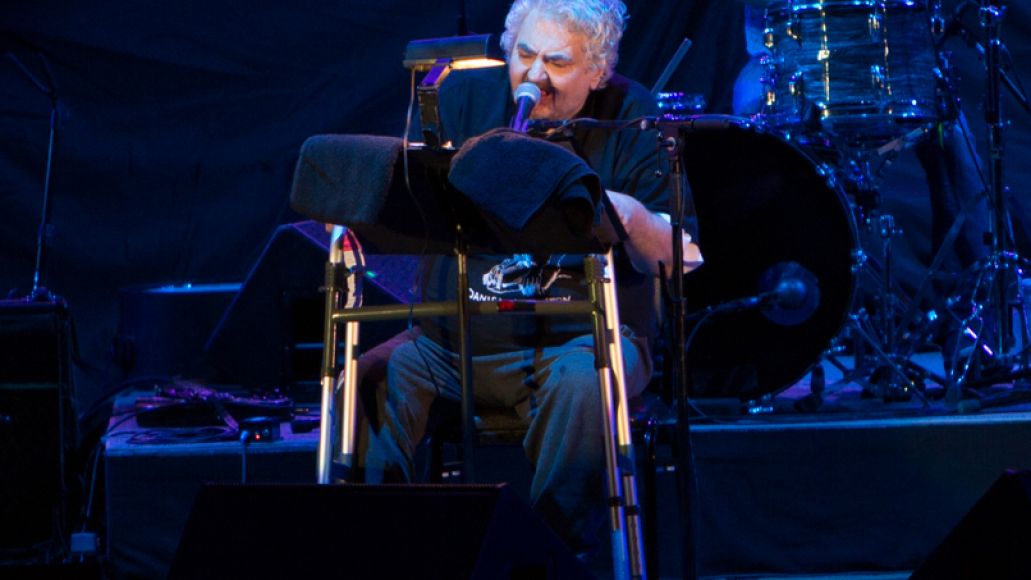 Maybe the same is true of Jeff Mangum, leader of headliner Neutral Milk Hotel. Mangum has had his own battle with mental instability over the years, nowhere near to the extremity of Johnston, but still the journey from reclusive cult hero songwriter to headlining the Hollywood Bowl is its own kind of incredible. Of course, the expectation out of the Neutral Milk Hotel set was much larger than that of Johnston’s, especially following opener The Breeders, whose Kim Deal led the charge though pretty-perfect-sounding renditions of their best known song “Cannonball”, the beloved “Divine Hammer”, and the subtly beautiful and touching opener “Off You”. It is notable that the Pixies are headlining the same venue in a little over a week, but if anything (besides Deal happily teasing that the band has been hard at work on new material in their basement in Ohio), the Breeders’ set was a reminder that Deal is doing just fine post-Pixies, that her rock and roll soul is still as strong as ever.

Following all this, Neutral Milk Hotel easily could have underwhelmed. With the video projectors turned off (the Bowl was about half-full, selling a little over 9,000 tickets for the event, so the likelihood that anyone was too far away to see was slim), the rather large venue could have failed to be the intimate space that is needed for NMH leader Mangum to connect with his adored songs. Mangum’s tendency to rush through his music could have spoiled moments that many in attendance have waited more than 15 years to hear live. But none of this happened. The night was pretty much as perfect as could be hoped for. Somehow, Neutral Milk Hotel at the Hollywood Bowl was a success in every observable way.

A Neutral Milk Hotel live song is not a direct recreation of the album, but that’s a good thing. Sure, you may miss certain Mangum vocal tics, but a lot of the joy is taken from seeing the effort that the group of coming-and-going musicians puts into trying to recreate the albums. Julian Koster, the live band’s MVP with his array of keyed instruments and impressive saw playing, hops and spins circles while playing bowed banjo and bass, delivering the occasional oddball banter (“a praying mantis sat on Jeff’s hat for the duration of our soundcheck”). Jeremy Barnes plays drums with enough passion to lose the occasional drum stick, wise enough to have plenty of spares nearby so as not to lose the beat.

But really, the unforgettable moments were the times the band left the stage, and the times they came back. Mid-set, the crew abandoned Mangum so he could play “Two-Headed Boy”. The crowd was hushed, less a sing-along moment that might be expected than a piece of time to marvel at the fact that this was really happening. Jeff Mangum was singing “Two-Headed Boy” at the Hollywood Bowl, sounding inspired and passionate, and we were there to hear it. And when the band returned to punctuate the song with “The Fool”, the horns and the violins and the entirety of the instrumental came together with the kind of majesty that music is capable of only sometimes achieving, where nothing else was happening in the universe except what was being heard coming from the stage. 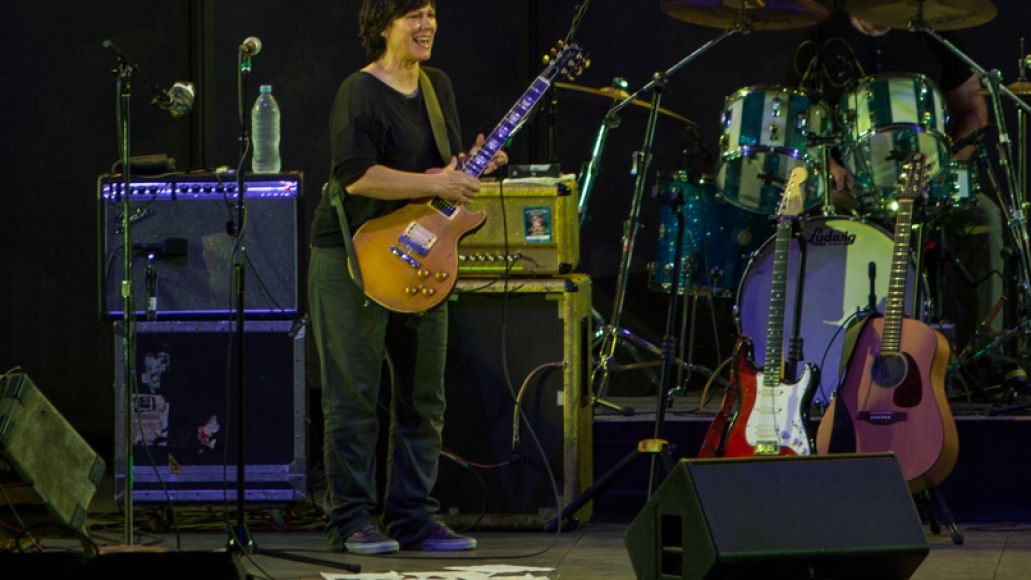 Near the end of the set, Mangum announced that the next three songs would be their last, that they “wouldn’t do that leaving stage and coming back bullshit.” Neutral Milk Hotel then ended the set as In the Aeroplane Over the Sea ends, with “Two-Headed Boy Part 2” seeing the band once again depart the stage for Mangum to finish the set alone. To his own standing ovation, Mangum motioned at his heart, having previously thanked the crowd for their “kindness,” with most adhering to the no-photo policy (which really shouldn’t be a hard thing the do, but that’s a rant for another time).

But very quickly, Neutral Milk Hotel came back onstage, maybe realizing that they had finished before curfew and still had time for one more song. They then ended the night as it should, with the band playing together, for the understated, lovely “Engine”. It wasn’t on the setlist, and it is nice to think that it was an impromptu coda for the evening, with the attentive and respectful and often enthusiastic audience deserving a special treat to take them back to their cars. It was a move from a man who has maybe rediscovered his love for playing in front of people, his love for his band (which he sincerely expressed near the night’s end), and his love for his own songs. It was a move from a man whose soul might have been saved by rock and roll like Daniel Johnston’s. It was a move from a man who might not take a couple more decades to play Los Angeles again. Most importantly, it was a move from the whole band, who understood the weight of the evening, what seeing Neutral Milk Hotel at the historic venue meant to so many people, and showed the moment the respect it deserved. Bravo.

Neutral Milk Hotel Setlist:
I Will Bury You in Time
Holland, 1945
The King of Carrot Flowers, Part One
The King of Carrot Flowers, Parts Two & Three
Naomi
Ferris Wheel on Fire
Two-Headed Boy
The Fool
In the Aeroplane Over the Sea
A Baby for Pree / Glow into You
Gardenhead / Leave Me Alone
Song Against Sex
Ruby Bulbs
Snow Song, Part One
Little Birds
Ghost
[untitled]
Two-Headed Boy, Part Two
Engine 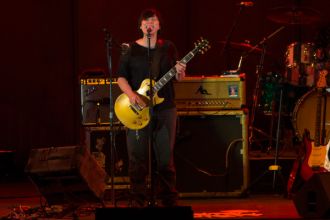 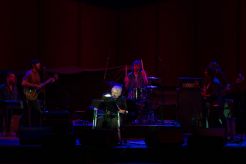 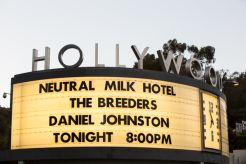