One time for ‘Sota: After he “fucked up” the words on his first attempt, Philly’s Adam Granduciel and the rest of The War on Drugs successfully opened their second First Avenue show in as many nights with a cover of Bob Dylan’s “Tangled Up in Blue”, honoring the man who spent time in nearby Dinkytown before moving to Greenwich Village some 50 years ago. Not only was the cover geographically appropriate; Granduciel also has a kinship with mid ’70s Dylan because his band’s third album, Lost in the Dream, is gut-wrenching, defined by isolation and anxiety much like Blood on the Tracks is defined by Dylan’s romantic regrets.

You’d have to go back to the mid ’60s, however, for a Dylan show that was as musically flashy as The War on Drugs’ set last night. Granduciel played with five buds, including saxman Jon Natchez, but he took full advantage of his role as frontman, grabbing his harmonica on occasion and uncorking guitar solos where he saw fit. (Yes, he found a hole at the end of “Tangled Up in Blue”.) Particularly bold six-string work came during “Comin’ Through” (off 2010’s Future Weather EP) and “An Ocean in Between the Waves”, both moments that made him sound closer to Yngwie Malmsteen than to Conor Oberst. 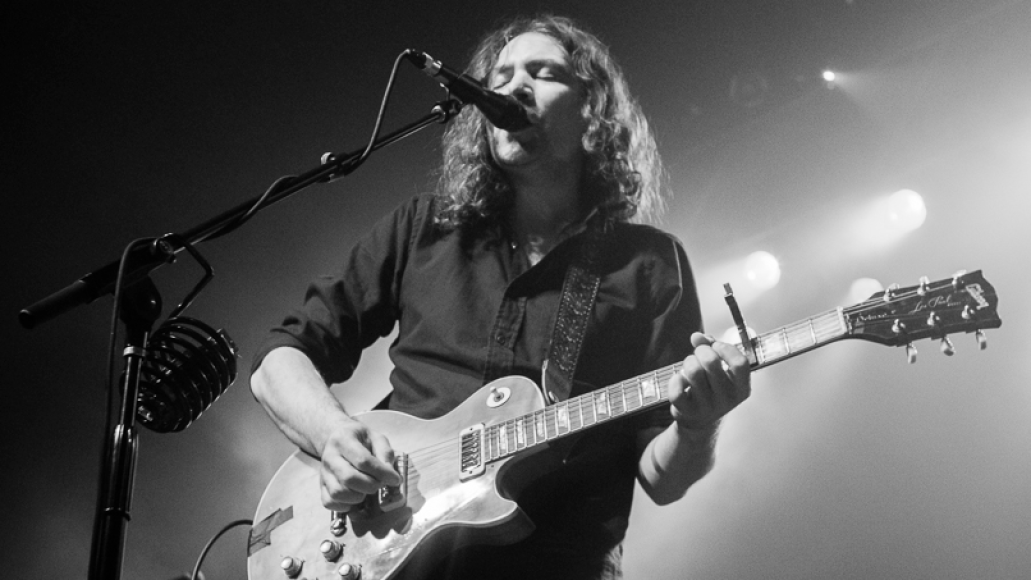 Between songs, the band pump out their signature room-filling drones, which have a hypnotic, cleansing effect. Paradoxically or no, that holds especially true for the fittingly titled “The Haunting Idle” and Granduciel’s emphatic chord-swipes therein. Those sections probably went on long enough, though. More important to the band’s success are the songs, specifically those of Lost in the Dream. The album is the band’s best yet because they’ve found a way to expand upon the sounds of their road-rock influences while Granduciel explores the personal themes that, in the long run, make “classic” albums “favorite” albums.

The headrush of Lost in the Dream lead single “Red Eyes” — saved for two-thirds of the way through the 90-minute show — spurred more dancing than any other song. Its lyrics are too urgent to overlook entirely in favor of physical movement, but it was easier for everyone to stand still during “An Ocean in Between the Waves” and “Burning”, two songs that keep a steadier pace, causing lyrics about a “heart that just don’t beat the same anymore,” for example, to echo through the room as if it really was a matter of life and death.

(Cover Story: The War on Drugs: Journey Towards Clarity)

The band started their three-song encore with a cover of John Lennon’s “Mind Games”, which illuminated that Granduciel’s songs just aren’t all that catchy, by comparison. But I doubt that made anyone think less of Lost in the Dream. Personally, it just made me appreciate how hard he worked to craft an album so complete that a given vocal hook, no matter how strong, might sound petty compared to the riff, solo, instrumental section, or confession that came right before it.

Setlist:
Tangled Up In Blue (Bob Dylan cover)
Under the Pressure
Comin’ Through
Arms Like Boulders
An Ocean in Between the Waves
Eyes to the Wind
Burning
Buenos Aires Beach
Red Eyes
Come to the City
In Reverse
Encore:
Mind Games (John Lennon cover)
Suffering
Brothers

Live Review: The War on Drugs at Minneapolis' First Avenue (9/23)