That Old-School Shit is a hip-hop subgenre that will always be warmly welcomed. However, 2014 has revealed time to be more of an antagonist to the game — from New York’s insistence on revivalism (which again exposed how far behind the city is in the conversation) to this particular night’s performers at the Source360 concert at Brooklyn’s Barclays Center.

The final three acts hit the stage well after they were scheduled. The Dipset crew was more or less the welcomed uncle out of the ‘90s/early ‘00s family. You’re damn right your uncle would be welcomed if he volleyed jams like “Ballin’”, “Dipset Anthem”, and “Oh Boy” — hits known to cause collateral damage from northern Bronx to south Brooklyn in their heyday. Jim Jones, Juelz Santana, Freekey Zekey, and Cam’Ron — with JuJu off to the side — did the tough job of re-energizing what was a deflated audience. Nothing more, nothing less. Lil Kim’s following short set was a bit of a slog, however. There was the obligatory performance of “Get Money”, the reminder that, yes, Biggie is missed, Havoc of Mobb Deep coming through for a “Quiet Storm (Remix)” performance, a lot of dancing and not a lot of Lil Kim performing her own lyrics. Then there was this one audience member absolutely stunned by the former H.B.I.C.’s derriere. “Damn, Kim’s ass is fat,” he said, tears in his eyes.

But a few minutes after, RZA took the stage. It was time. 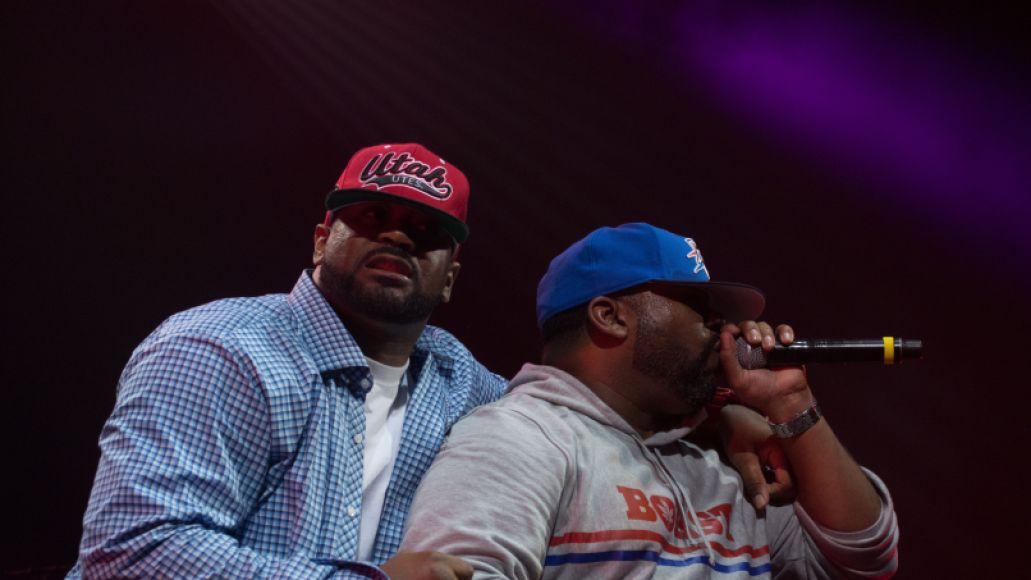 You’ve seen the headlines over the past eight months: Wu-Tang Clan was struggling. Maybe they still are and Raekwon and RZA’s reconciliation was a PR move. But what’s fact is the clan missed dropping a 20th anniversary album partly because of in-group fighting and that Raekwon did blast The Abbott in pretty ignominious fashion. The seeds of dissension were planted over a decade ago, but 8 Diagrams and watered-down singles “Keep Watch” and “Ron O’Neal” were signs of dissolution.

The surrounding talk had to shut up for the next hour, though. Wu-Tang was here and they were united. Or at least it seemed that way. You can only tell so much from a short set (the organizers cut the Clan’s set because of time constraints). But whatever questions there were were irrelevant. Again, the Wu-Tang was here. The visceral nature of Ghostface Killah’s opening bars to “Bring Da Ruckus” kicked off the set. It was a reminder: Shit else matters when you enter the 36 Chambers. 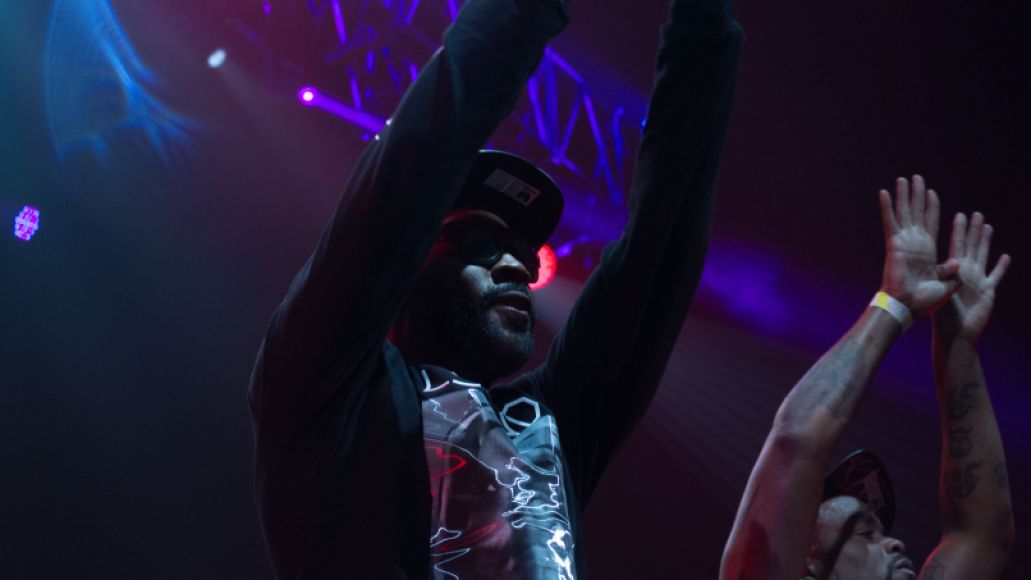 It turns out the ironic cure for Wu-Tang’s ailment is time. The immediacy of the 36 Chambers tends to do that. It’s urgent, and it’s something the fortysomethings relived rather than simply performed. You could see it in the rugged voracity with which Raekwon performed his “Protect Ya Neck” verse or when Method Mad jumped onto the speakers for “M.E.T.H.O.D. Man”. The W hand signals were being thrown through “Clan in Da Front”, “Cream”, and “Wu-Tang Clan Ain’t Nuthin Ta F’ Wit” — there was no need for RZA to command them.

Wu-Tang may have mentally traveled 20 years back, but it felt at times they traveled back as individuals rather than a collective. U-God barely had verses on the 36 Chambers, so he was left doing a quiet old-man shimmy as some of those tracks ran their course. Then there was Ghostface and GZA standing stoically on some of those first few songs. GZA looked especially awkward, scratching his face as if he wasn’t sure what to do.

These criticisms slipped away by the time the set-ending “Triumph” swung through. A bass-rumbling classic, all that was really needed was some effort on the Clan’s part. The crew had plenty of that, and for a short time, they spoke worldly concerns out of existence.