Unlike our music coverage, Consequence of Sound won’t be covering day-to-day news in film. (After all, our buddies over at The Playlist do a commendable job in that area.) Granted, that won’t stop us from posting groundbreaking news updates every so often — for example, a teaser trailer for the new Star Wars film — but for the time being, we’ll be rounding up the week’s top stories each Friday. You’ll get a blurb from the original source and our two cents on the story. So, if you’re slow to the daily grind, this might be your go-to compendium.

While it was without a doubt an exciting week for us, it wasn’t particularly busy in the film industry. Al Pacino’s been busy, Dwayne Johnson probably prefers DC Comics these days, and a legend passed away. Like we always say, this isn’t the news we want to read, but they are the stories we have to write.

In the meantime, catch up on the 411 below and expect things to heat up in the days ahead. After all, the Toronto International Film Festival is underway, which is sure to produce a number of must-read stories for next week. 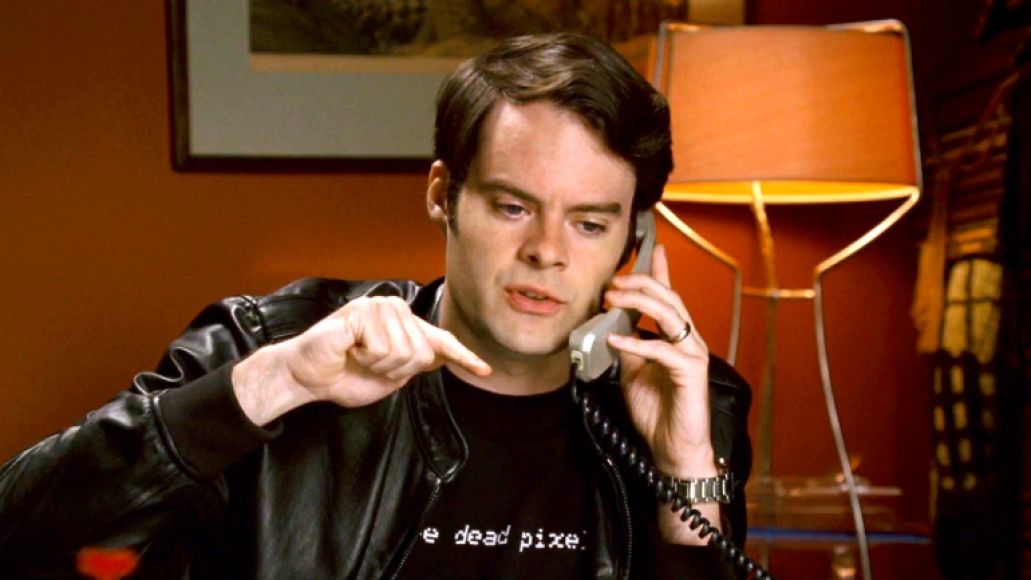 Inside the book “Poking a Dead Frog: Conversations with Today’s Top Comedy Writers” by Mike Sacks, Hader provides his list of 200 movies every comedy writer should see. Yes, you’ll see the usual staples from folks like Woody Allen, the Marx Brothers, Mel Brooks, and Charlie Chaplin, but there are some nice, not so obvious picks, too. Billy Wilder‘s scathing “Ace in the Hole” notches a spot, as do Stanley Kubrick‘s “Eyes Wide Shut” and Robert Altman‘s “Nashville.”

Okay, so this was technically last week’s news, but it made some waves over the last couple of days. Besides, everyone loves a good list, and Bill Hader’s collection of 200 movies every aspiring comedy writer must see isn’t so shabby. I’m not as partial to 9-5 (No. 1) or 1941 (No. 2) as he clearly is, but I love that he gave a shout-out to Martin Scorcese’s incredibly underrated After Hours (No. 6) and that George Lucas’s oft-ignored American Graffiti (No. 9) found some love, too. There are some highly questionable, oddball rankings; for example, he slots Sam Raimi’s Army of Darkness (No. 14) over Robert Zemeckis’s Back to the Future (No. 16), the latter considered one of the best scripts to ever hit Hollywood. I love Ashley Williams — he’s staring at me in action figure form as I write this — but there’s no way he takes precedence over McFly.

McConaughey and Refn have joined forces for a new campaign for Lincoln, and it’s sort of in the sweet spot for both of them: Refn gets to shoot a handsome man behind a wheel, and McConaughey gets to spout some cod-philosophy in his Rust Cohle manner. We poke fun, but there’s actually a sly humor to some of these, mainly when McConaughey faces off against a bull.

How many times did you watch Drive? How many of you actually bought the jacket? Now, how many of you actually sat through all of last year’s Only God Forgives? I’m still raising my hand, and I hope several of you are, too. Winding Refn is that rare sort of breed in Hollywood who puts a precedence on mood over, well, anything else. That’s why so many of his projects have proven polarizing over the years. So, it must have been Matthew McConaughey’s name (and hot streak) that convinced the marketing department over at Lincoln that these meditative, and oddly humorous, ads were important to their brand. Otherwise, I’m lost. As The Playlist points out, these five ads feel more like an epilogue to this year’s season of True Detective, as if we’re following a very positive Rust Cohle throughout the rugged highways of America. It’s sort of brilliant.


8. The Rock confirms himself for DC’s Shazam 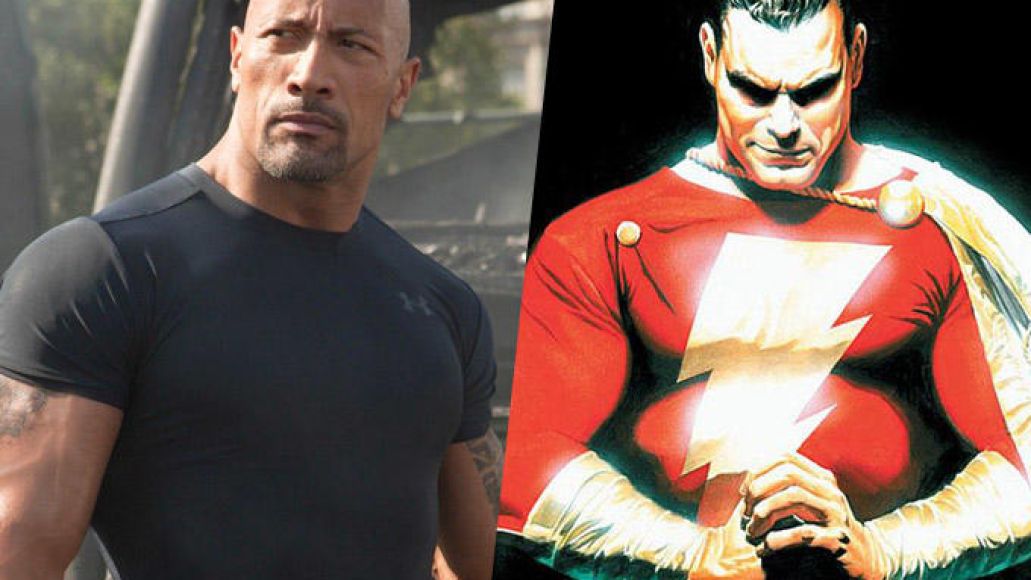 At long last, Dwayne Johnson stopped flirting and teasing and revealed that, yes, he is going to be in the “Shazam” movie, and yes, he is going to play the villain, or at least antihero, Black Adam. And this seems to have opened the floodgates on the project. First, it was revealed that the film has a writer, in the shape of Jack the Giant Slayer’s Darren Lemke, and now the head of the studio has talked more about it, and some of what he says is surprising.

Kudos to DC for nabbing a big name like Dwayne Johnson, though good luck to their marketing team in promoting a franchise with the name Shazam, which will no doubt conjure up memories of Shaquille O’Neal’s magical flop, Kazaam. Admittedly, I’ve never read the comics, but if it has “a sense of fun and a sense of humor,” as New Line’s Toby Emmerich insists, then maybe it’ll find success in the same realm that nurtured Guardians of the Galaxy this past summer. Then again, Emmerich also says it won’t have ties to the forthcoming Justice League movie, which makes this writer wonder why Shazam would take precedence over other lucrative DC properties. We’ll see how this unfolds. 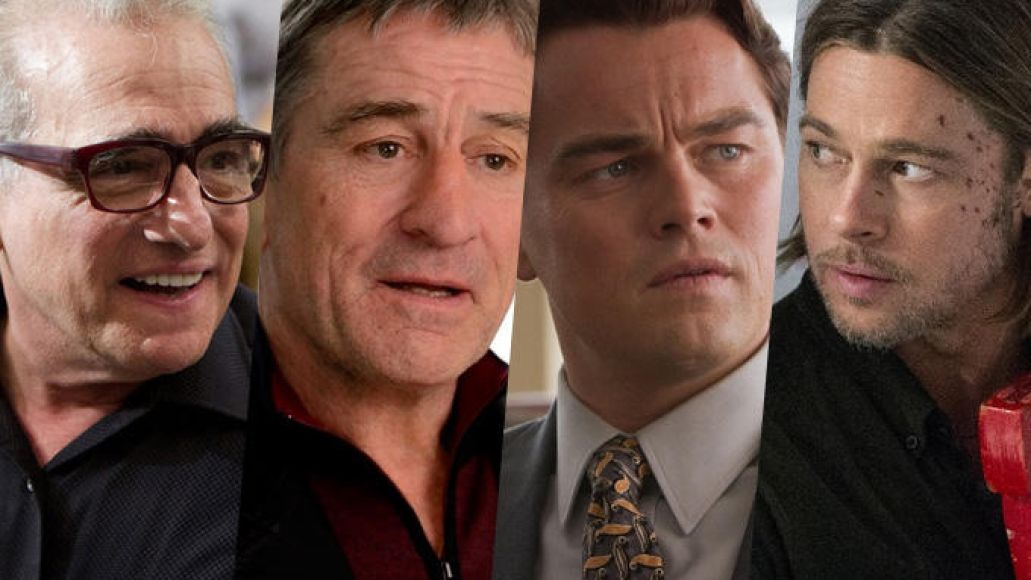 Well, one thing’s for sure: Melco-Crown Entertainment has one hell of an advertising budget. Somehow they roped in the creme de la creme of masculinity in Hollywood, and the short film should be something worth watching at least once on YouTube, right? As The Playlist reports, “[The short] will premiere next year at Melco-Crown’s new film-themed resort Studio City in Macau.” Something tells me that Marty, Lenny, Bobby, and Brad will have a number of vacays out to Hong Kong next year, and they’ll wine and dine, and DeNiro will admit, while heavily intoxicated, that he preferred Casino to Goodfellas. That’s when everyone will go silent, and Scorcese will once again remind him that Taxi Driver 2 is off the table. 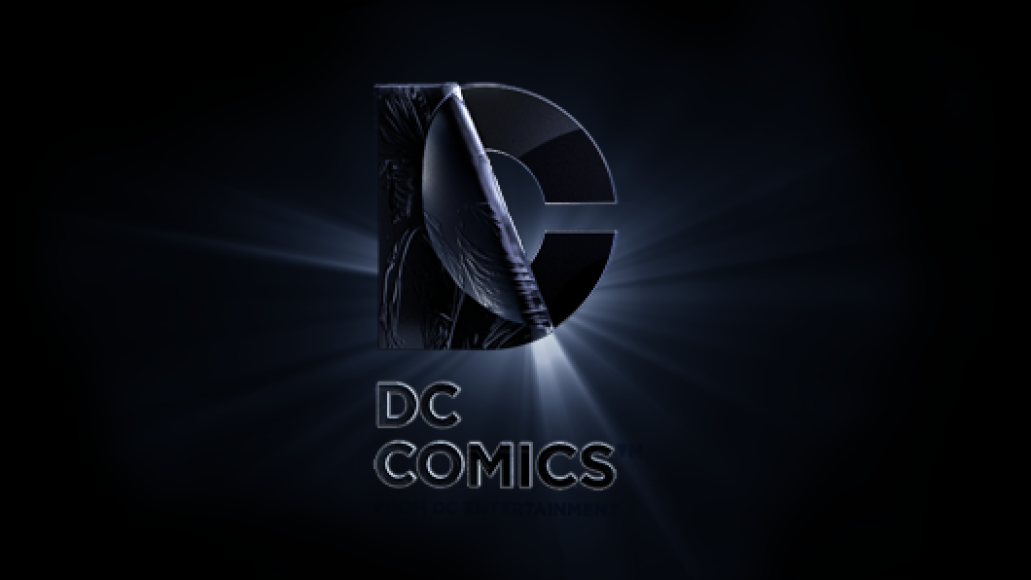 Remember in the late ’90s when this was pretty much the only way anyone on the Internet confirmed legit stories? Oh, to be young again. Well, wouldn’t you register some of your properties? Personally, I’m surprised this didn’t happen five or six years ago, to be honest. As Garth Franklin writes, “The studio announced release dates for nine upcoming DC Comics movies a while back, all were for untitled projects.” It would make sense to release films for any of the above properties (still hesitant about Shazam, yes, two entries later), but if they’re really going with Jason Momoa for Aquaman, they should also be sure to register AquamanDTVMovie.com. 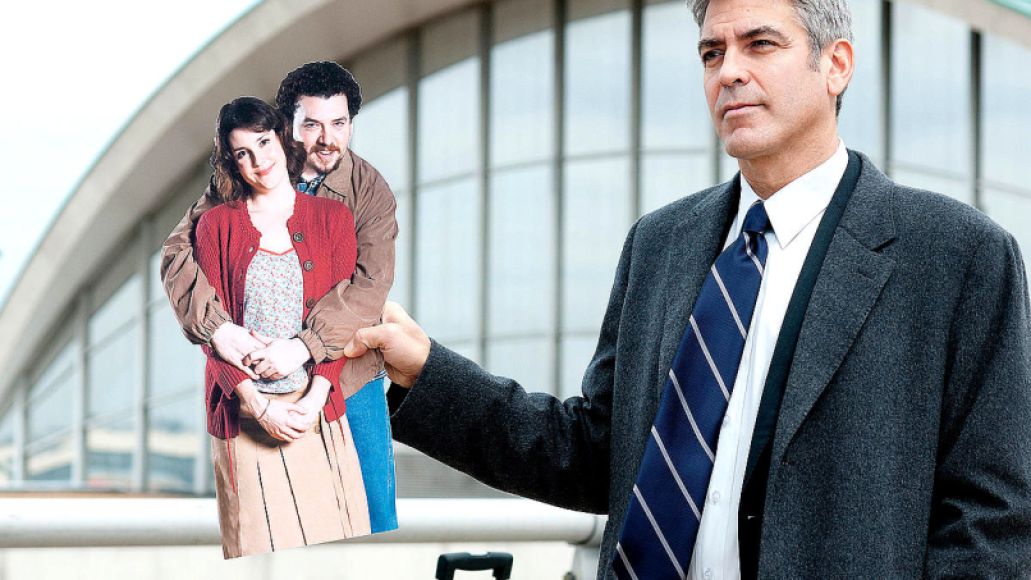 George Clooney has selected an adaptation of Nick Davies’ book “Hack Attack” as his next project to direct. The film is an account of the British phone hacking scandal surrounding Rupert Murdoch’s news empire. Davies investigated News Corporation and its subsidiary, News International over the course of six years and his book explores their habit of hacking into voice mails of politicians, actors, and ordinary citizens.

The Cloonster picked one hell of a week to announce a film about a phone-hacking scandal. While Hollywood’s experiencing their own cellular paranoia, Clooney’s one step ahead with a project that will no doubt shame the hackers everyone either loves or hates. Columbia Pictures’ Michael De Luca says it best, “As the son of a journalist, George has a sharp interest in the role journalism plays in all of our lives – whether that’s for good, as in Good Night, And Good Luck, or for bad. With Hack Attack, George will explore the dark side of that world, a business where all of the rules of journalism are broken in the race for an easy and ever-larger payday.” Don’t reach for the Smug Alert button just yet. This one sounds like classic Clooney and not the Melba Toast we received earlier this year with The Monuments Men. Do your thing, George. 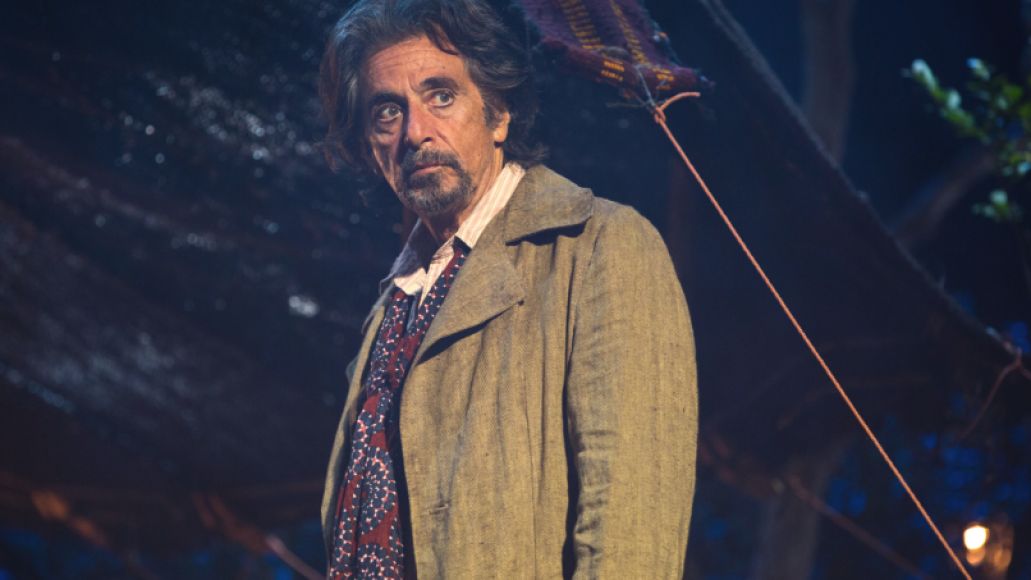 Al Pacino’s about to take a flamethrower to Hollywood. Both Barry Levinson’s The Humbling and David Gordon Green’s Manglehorn open up at this weekend’s Toronto International Film Festival — two films that are reportedly departures of Pacino’s more “hoo ha” fare in recent times — and now he says he’s open to something with Marvel. As Deadline reports, Pacino really enjoyed Guardians of the Galaxy and would entertain the idea of returning to the comic world. “I would do anything that I could understand in terms of how I fit in it. And you know, of course if I could fit in it. Anything’s possible,” he explained. “You know, I did Dick Tracy and I got an Oscar nomination, so come on. I mean, what can I say?” The man has a point. 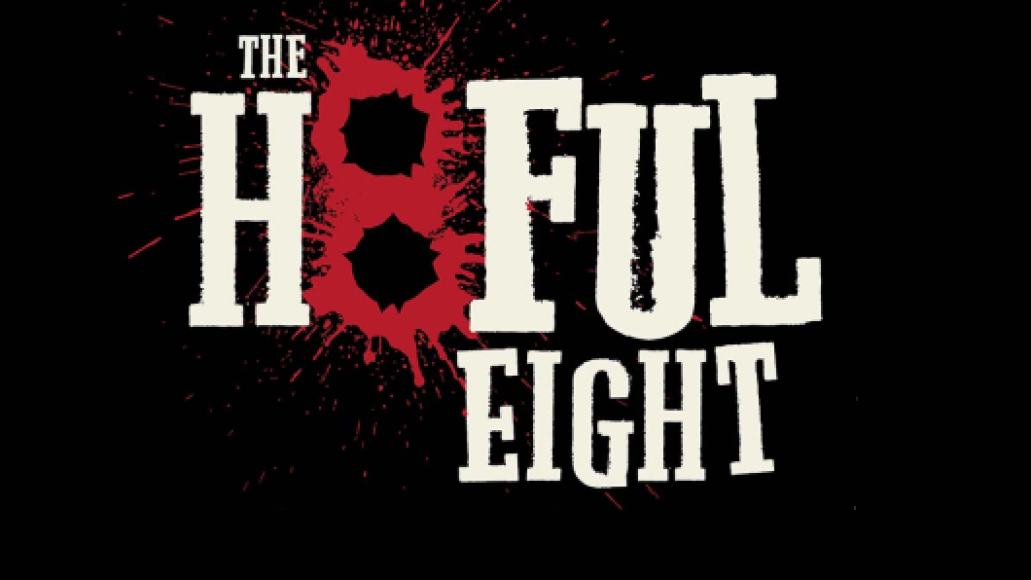 The Weinstein Company is re-teaming with Quentin Tarantino on his upcoming Western “The Hateful Eight” with shooting starting in January and a release set for the fall of 2015.

The announcement is not a surprise, given that all of Tarantino’s films have been distributed by Bob and Harvey Weinstein, first through Miramax with “Reservoir Dogs” and then through TWC.

The post-Civil War actioner will be shot on 65mm film and have the widest 70mm film release in over 20 years with the initial release in 70mm, followed by releases in 35mm and DCP formats.

What’s left to say? Any self-respecting cinephile will agree that 70mm is always a treat — as evidenced by the fine folks at Chicago’s Music Box Theatre, who host two 70mm film festivals a year. And really, Tarantino has forever been the unofficial voice of traditional cinema, so this move comes as no surprise. Here’s hoping this move will prove influential to other distributors, something that would sure make Harvey Weinstein smile.

If you don’t know what The Fappening is, please pass Go and collect $200. If you do, then you’ve likely read enough by now. Glamour’s spiraling coverage sums up the events mildly, and Molly Lamber’s op-ed piece on Grantland is definitely required reading on the matter. That is all.


1. The Death of Another Legend: Joan Rivers 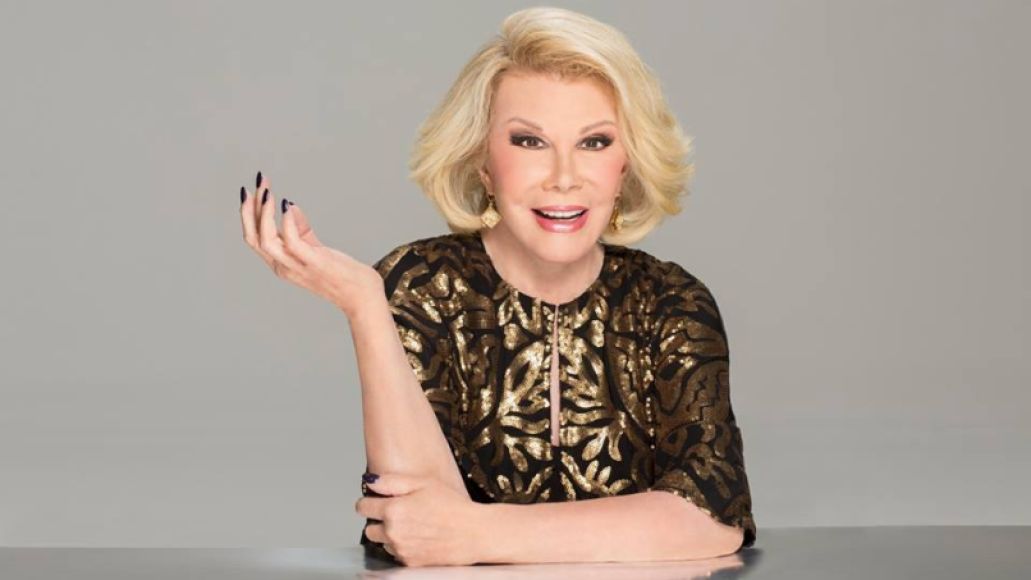 Comedian, actress, and author Joan Rivers has died at the age of 81. Rivers suffered cardiac arrest while undergoing a vocal cord procedure last week at a clinic in New York City’s Upper Westside. She spent the last several days on life support before passing away Thursday morning. Rivers’ daughter, Melissa, confirmed news of her death.

It’s never a fun moment when you have to tell a writer to prep an obituary. But that’s what happened last week upon hearing the news of Joan Rivers’ cardiac arrest, that’s what Ben Kaye put together days ago, and that’s what we, sadly, had to publish on Thursday afternoon. Offended, delighted, baffled, or disgusted, Joan Rivers charmed the socks out of everyone who cared to watch — and they tallied in the millions. As a comic and television personality, Rivers had such an uncanny blend of self-deprecation and personal chutzpah that few would ever cross her wicked tongue. Those who did could only laugh and that’s, in part, what made her such a genius. Here’s hoping Johnny Carson met her on the otherside with a hug.

And that she pushed him aside, true to her spirit.