Music, Movies & Moods is a monthly, free-form column in which Matt Melis @MistaMelis explores the cracks between where art and daily life meet.

At the end of his novel Still Life with Woodpecker, Tom Robbins, having abandoned his ill-equipped Remington SL3 typewriter, playfully concludes in longhand, “There are two kinds of people in this world: those who believe there are two kinds of people in this world and those who are smart enough to know better.” On most days, I agree with Robbins, delicious contradiction and all. It’s a cloudy pearl of spot-on wisdom from an offbeat source and probably worthy of a bumper sticker if you happen to own a bumper. But, as with any rule, there are exceptions. Enter Tusk, cult indie director Kevin Smith’s new horror film (or, possibly, depending on the twistedness of your worldview: coming-of-age drama, buddy comedy, or marine biology documentary).

Maybe I’m wrong, but if you pooled a random sampling of passersby — don’t set up shop outside a comic book convention or church hall on bingo night either — and asked them if they’d like to see a movie where a demented, amateur surgeon (Michael Parks) permanently sews the Apple guy (Justin Long) into a walrus suit, I’m assuming you’d be met by one of two reactions: utter repugnance or a request for a pair of comped tickets. There’s no gray area there — no place for “Let me think about it,” like someone dining out and contemplating if they have enough room left for dessert. That synopsis either appeals to you or it doesn’t. And according to Smith, there’s no catch – no dream or metaphorical cop-out – or, for that matter, redeeming quality. Wallace, Long’s character, is going into that suit. The film’s trailer promises the age-old tale: spider spins its web, insect gets snared, then … well, walrus. It’s unabashedly Chumley (is there another iconic walrus to reference?) meets The Human Centipede.

I’ll be in attendance tonight when Tusk hits my local Chicago theater. And no, I’m not the sort of person who would normally go to a film like this one. Frankly, I’m freaked out by scary movies; I’m the type who watches, say, The Silence of the Lambs and then imagines Hannibal Lecter lurking behind every door or drawn curtain for the next two weeks – not to mention preparing my meals in restaurant kitchens. So, I suppose I fall into a presumably rare third category of Tusk viewer: the person who doesn’t want to go but willingly goes anyway. It’s not a masochistic wish for nightmares or a morbid curiosity about that walrus costume that compels me to go. Nor is it the “different strokes” mentality in me that likes the idea that there’s room in cinema for a filmmaker like Smith to tell a fucked-up walrus story. I’m going to see Tusk because Smith has become the big, bearded, hockey jersey-wearing cheerleader who aspiring filmmakers – or, hell, just everyday people searching for a creative outlet in their lives – can lean on for encouragement.

My own history with Smith’s work isn’t an uncommon one. In early high school, I borrowed a VHS of Clerks from a classmate and soon found myself engrossed in his movies, comics, and television fare (collectively dubbed the “View Askewniverse”). The appeal to my group of friends was simple: seeing ourselves represented on the big screen somewhat accurately for once, buoyed by a bit more vulgarity and wit than most of us dared to or could actually muster, and presented at our dissocial best. Smith’s films acted as suburban Jersey versions of the same conversations, misadventures, and general slacking that teenage and twentysomething males across the country regularly engaged in or at least fantasized about. The films became a secret language among my friends, and embracing the Askewniverse included buying swag like a “Buddy Christ” action figure; sneaking into an R-rated Dogma as an underage, lapsed Catholic; and planning a failed pilgrimage to the Quick Stop convenience store in Red Bank, New Jersey, where Smith’s unlikely filmmaking career took root 20 years ago. 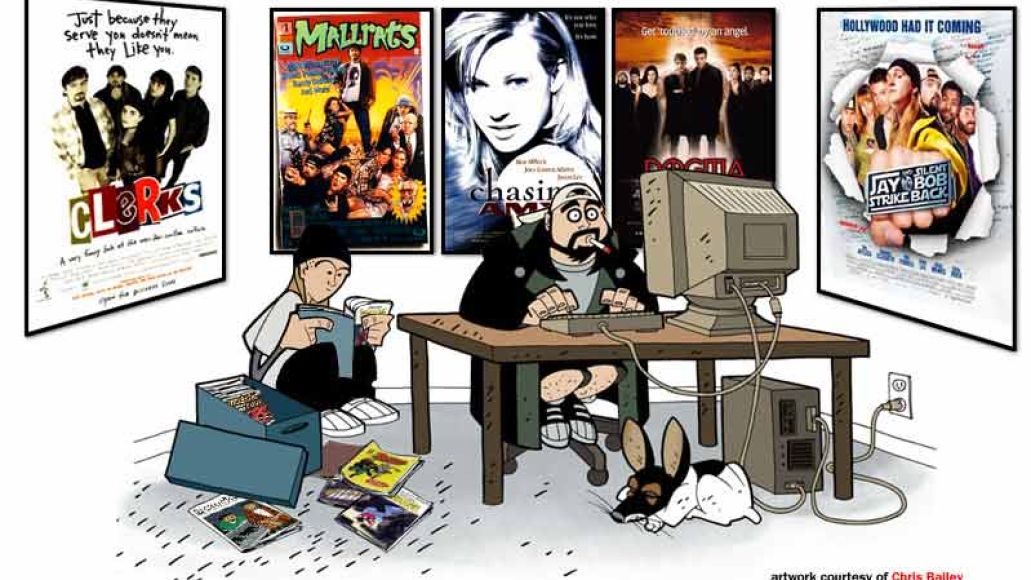 A couple years ago, though, I ran across a ripped copy of Smith’s Burn in Hell special on YouTube while shock-watching Westboro Baptist Church footage at 3 a.m. The Q&A format of Burn in Hell arguably features Smith in his best medium: fielding simple “tell me about…” questions and spitting back, over the years, unforgettable, tangential, and raunchy tell-all tales on topics ranging from credulity-straining encounters with Tim Burton, Prince, and Bruce Willis to an anal fissure story that’ll give you a newfound appreciation for your good rectal health. Burn in Hell carries on in similar lowbrow fashion until near the program’s end, when Smith responds to a question about his relative prolificacy with the story of his father’s unexpected passing. Smith’s response begins with an indelible, haunting depiction of his father’s final moments — “Dad died screaming” — and briefly eulogizes the man before opening up into an all-out, seize-the-day call to art. “And I remember thinking,” says Smith, “Oh my God, in this world, where even a good man, like my old man, is going to die screaming, there’s no point in not trying to achieve every fucking dream that I have.”

In fairness, Smith has long been the indie film community’s trench-coated sandwich board for the message “If I can do this, why not you?” He takes pride in that role, makes himself regularly accessible to fans (via post-screening Q&As, weekly podcasts, and all forms of social media), and is quick to point out that if he hadn’t seen fellow indie director Richard Linklater’s walking-and-talking Slacker in 1991, he never would have considered trying to make movies. But that Burn in Hell rallying cry feels different, more impassioned and outspoken than previous messages of encouragement. Maybe it was the passing of his father, his religious devotion to podcasting, or his newfound “herb”-al supplement of choice, but Smith seems to have forgone being the “you could do this” symbol in favor of just telling anyone who happens to be listening, “Go and do this already.” And it was the rah-rah bluntness of that 3 a.m. message that caused me, now a 31-year-old college teacher, to fall back into the Askewniverse all over again.

A positive message slingshotted out into a ravenously cynical world (a place full of what Smith dubs “why?” during that Burn in Hell speech) with precious little support for artists (the “why not”) has inherent value, but Tusk demonstrates the additional power of actually living out that message. Last summer, I tuned into Smith’s regular weekly podcast, Smodcast, co-hosted with his longtime producer Scott Mosier, for the now famous and always facetiously titled “The Walrus and the Carpenter” episode. Smith and Mosier, after reading through an advertisement offering free lodging in exchange for the tenant dressing and acting like a walrus for two hours each day — later found to be a hoax perpetrated by Englishman Chris Parkinson — began, replete with Oliver Twist and hooligan voices, fleshing out the brief ad into the skeleton that would eventually scaffold Tusk. 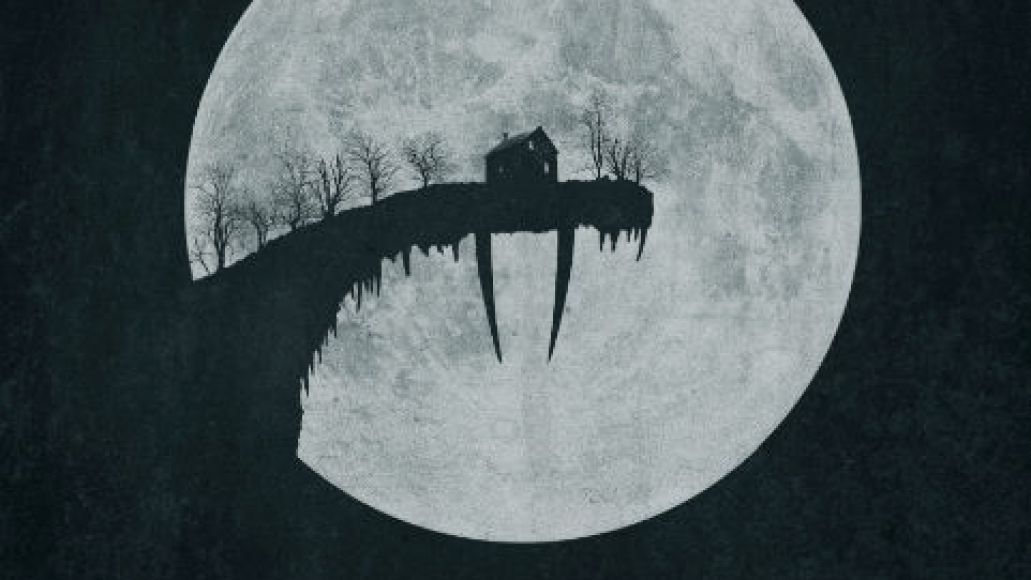 Two elements of that origin story strike me. The first resonates with me being a teacher. As Smith has pointed out — and as any teacher knows — getting started is almost always the hardest step, particularly for those who aren’t used to setting out on a project. As a writing teacher, I’m almost forced to admire how long a student can stare down a blank piece of paper before jotting something, anything down. And it’s never a petulant act of protest or rebellion; it’s simply the gut response to having no idea how to begin. But on this podcast, Smith pulls back the massive, cumbersome, steel-like curtain we so often drape around the creative process. The beginning of a worthwhile journey needn’t commence with a brilliant, propitious flash across the sky or oddly dressed little people urging us to follow a particular “yeller” road. Lolita hatched from Nabokov reading about an ape sketching the bars of its own cage with a piece of charcoal, and Tusk, now a motion picture playing on screens across the country, started as a running gag between two stoned friends. And Smodcast #259 floats in cyberspace as a demystifying, teachable moment for anyone confused about how to take a first step.

More so, though, all of this goes back to that feeling of solidarity that Smith — and most creative types who know the inherent vulnerability of putting a piece of yourself out into the world — naturally seeks with those who will support him, aka the “why not” crowd. Near the end of “The Walrus and the Carpenter” episode, Smith asks listeners to tweet #WalrusYes or #WalrusNo to whether or not they’d like to see him attempt a script. Now, some might write this moment off as a flight of wake-and-bake whimsy, but remember that Smith was all but retired from film at this point, convinced that he no longer had stories to tell in that medium. Something happened during that podcast, though. Credit Parkinson, walruses, the pot, or a combination of the three, but you could sense a creative spark in Smith, and the abundance of #WalrusYes responses that soon followed — the heaping helping of “why not” that Smith needed, maybe for the first time in many years — fanned that flame. Essentially, he reached out for #WalrusYes and got #KevinYes back in return.

If you watch that stirring excerpt from Burn in Hell, you’ll notice a number of watery eyes as the cameras pan through the crowd. Even as I watched at 3 a.m., I couldn’t help but feel that there was some dream of mine worth chasing down — one that couldn’t wait until the sun came up a couple hours later. And Tusk, if nothing else, really turns out to be the story of an artist living his message and setting out just to see if something can be done, even if that something happens to be making a fucked-up walrus movie.