At Consequence of Sound, we have a hard time saying no to a good music festival. the bands, the DJs, the rappers, the excitement of joining a bunch of fellow fanatics, it’s an unmatched experience. Even better are the destination festivals that require you to step out of your comfort zone by exploring a whole new environment that’s ripe with adventure and fond memories.

Bermuda is a beautiful island located off the east coast of the United States in the north Atlantic. Technically, it’s still a British Overseas Territory. So we figured, what the heck, let’s hit a show in England to fill the time while we eagerly await BACARDÍ Triangle at the end of October! We shipped out across the pond to the lovely Isle of Wight to explore Bestival and can’t wait to share our story. But you too can pass the time until BACARDÍ Triangle by signing up to win a spot among the 1,862 lucky souls who will get to enjoy a three-day holiday weekend full of music, parties, and exotic adventures.

Hot water spills on my lap and wrist. I’m jolted awake. The woman in the window seat next to me knocked over her coffee while I was catching one last nap on the flight from Chicago’s O’Hare to Heathrow. How embarrassing. Doesn’t she realize they drink tea here? An hour later, I’m minding the gap and emerging from the Underground at Piccadilly Circus. This is my first time in the UK and I couldn’t be more excited. Traveling to new place is a passion but traveling for a music festival is an entirely new sort of adventure.

I walk around downtown London and spot Big Ben while I’m eating a lamb kebab and staring at a giant Ferris wheel. I stroll along waterfront. The River Thames churns as I mentally prepare for the four days of music that’s about to follow at Bestival. 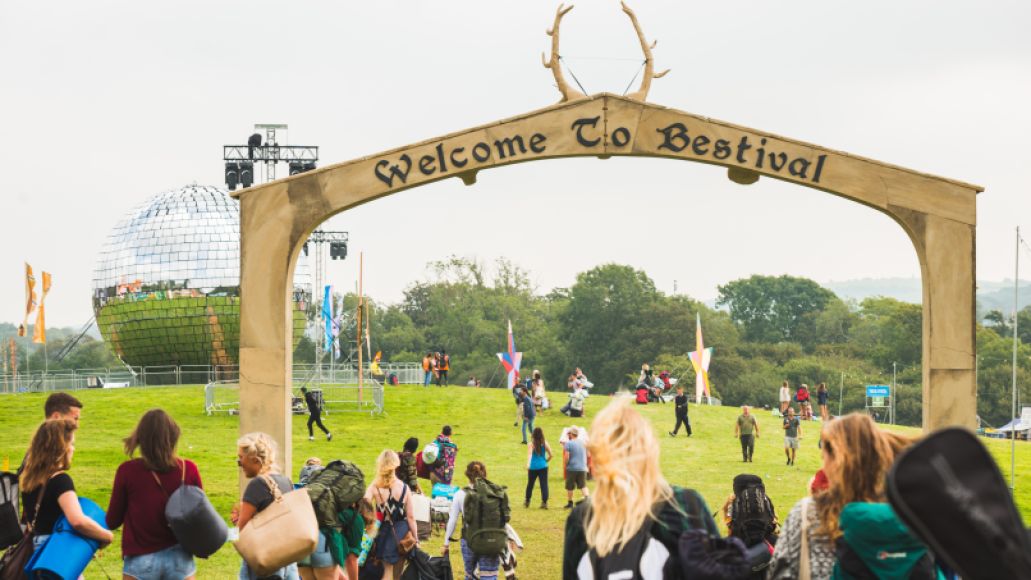 I take a train from Waterloo to Southampton, where a ferry awaits my arrival. I’m still digesting a sturdy English breakfast of beans, toast, ham, cheese, eggs, and sausage as I step into a queue and wait to board the Red Jet ferry. The line ahead of me is packed with festival goers. There’s always a few clear giveaways: the rain boots, camping equipment, cases of drinks, and yoga mats. Taking the Ferry also made me eager for the BACARDÍ Triangle. There’s just something neat about traveling over water to get to your destination.

Everyone’s gathered from the corners of the British mainland and its adjoining islands. Folks seem prepared for this journey to the historic Isle of Wight, a location that’s housed unforgettable performances from Jimmy Hendrix and The Who, among many others. There’s genial buzz of excitement in the air. 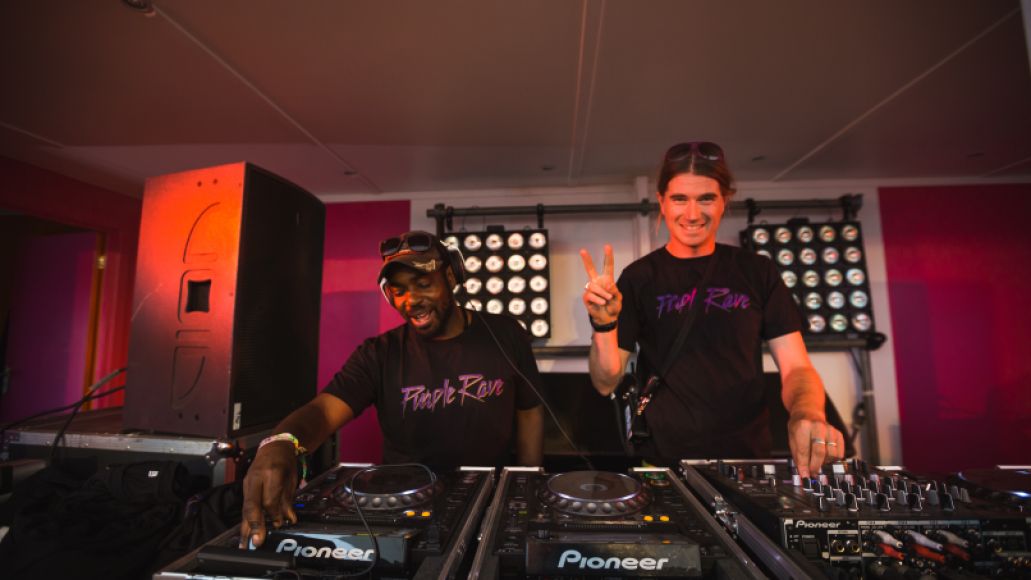 Festival organizer Rob da Bank, who is sort of the British counterpart to Lollapalooza founder Perry Farrell, kicks off the event atop the Temple Island Stage. He’s like the Godfather, looking out at those who have come to pay tribute to him on this Thursday evening. Bank delivers a stellar pep talk, like a coach rallying his team before heading into an intense athletic event. Four days in the elements. Four days of camping. Four days of music. It’s going to be an intense sort of fun. Bank raises his arms as if blessing those around him. He reminds everyone to “play safe and have fun!” before ripping into an upbeat mix of Prince’s “Purple Rain”. The festival has officially begun. But the travel adventure is already days deep at this point. 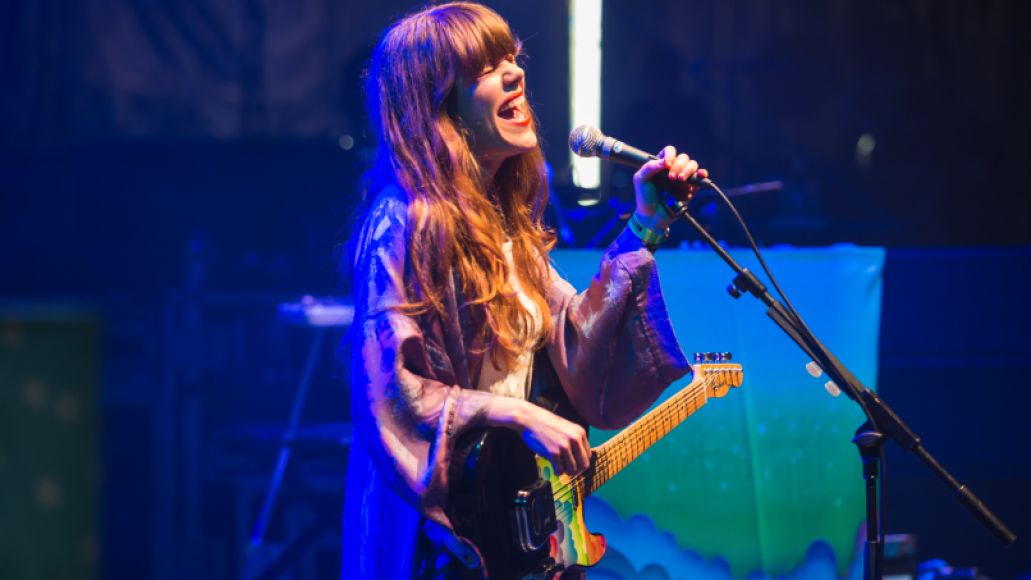 A beautiful thing about Bestival is the sheer number of stages and spaces for live music. The Big Top stage stands out as housing an especially fine collection of performers. My first visit there is to take in former Rilo Kiley frontwoman Jenny Lewis, who stands and croons “I’m gonna give my love to you on a day you gotta bring it back” on a country fried rendition of “Next Messiah” before launching into heartfelt versions “She’s not me” and Rilo Kiley cover “Silver Lining”. She attempts a few acoustic solo tunes while her bandmates gather arm in arm like a choir to back up their leader. Lewis has some trouble with her earpiece before finally abandoning the song mid verse. Judging by the wave of smiles in audience though, no one seems to mind.

Beck is up next. A reporter I met from the Telegraph ask me if Beck will only be playing new stuff? I doubt it. Beck’s known for tearing through his discography during live sets. Sure enough, he opens with “Devil’s Haircut”, and follows it with “New Pollution” and “Loser”. Beck rounds out the evening with a spectacular performances of ”Hell Yes”, “E-Pro”, and “Where It’s At”, as well as a number of soft tracks off Sea Change and the recently released Morning Phase. 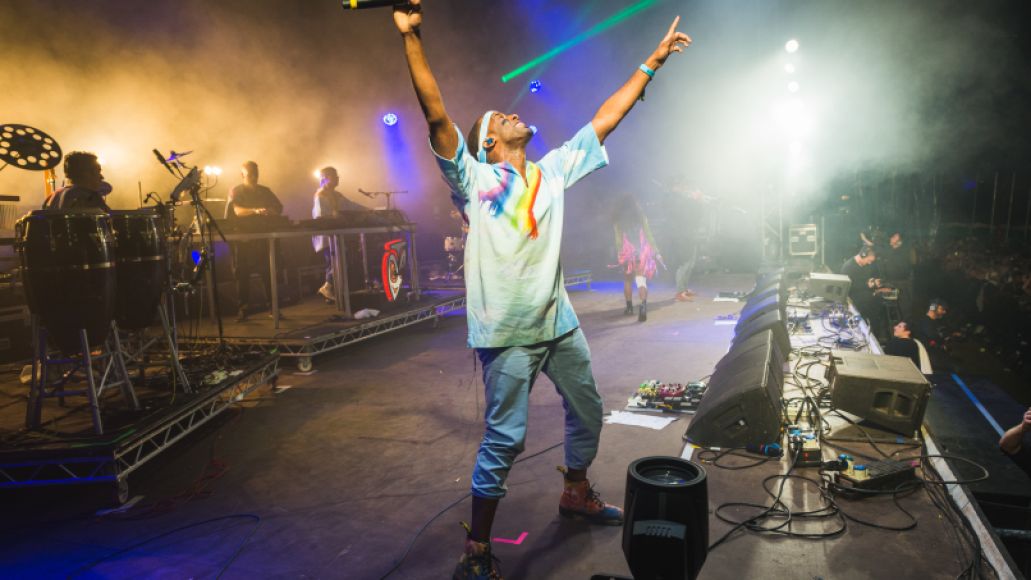 Throughout the weekend, the Big Top Stage features amazing sets from Paloma Faith, La Roux, and Chvchres. Watching Faith, CHVRCHES singer Lauren Mayberry, and the lively La Roux bounce between pop, dance, soul and everything in between recalled the unusual nature of UK native Ellie Goulding. But there are still two days to go. The adventure carries on. 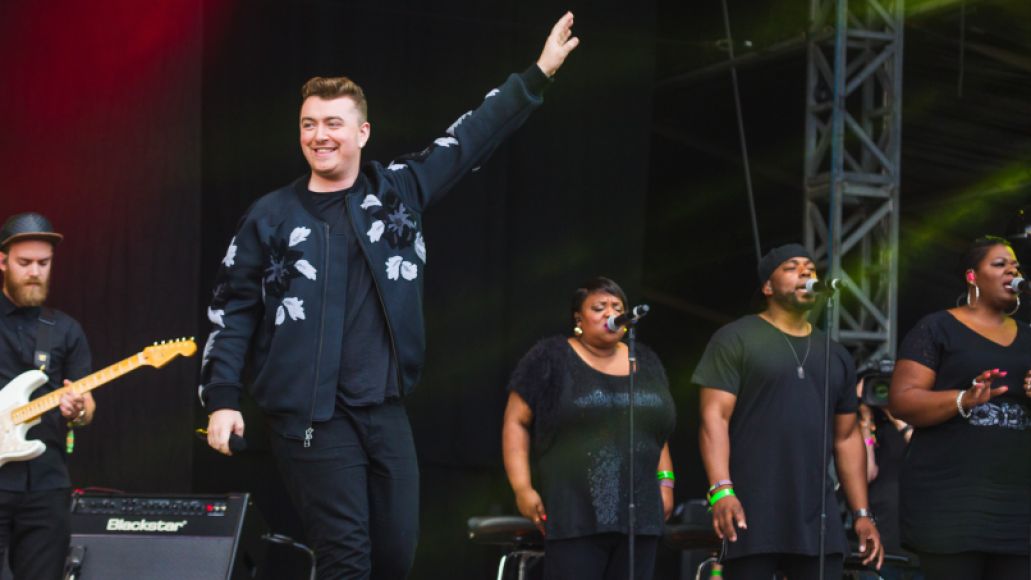 “Are you ready to dance?” inquires Sam Smith, who stands before a stylized backdrop covered in his initials. Like a modern day Boy George, the cherubic Smith launches into a soulful version of “Restart” and leads the swelling crowd in a one-two step. The grooving is followed by an Arctic Monkey’s cover “Crawling Back to You”. Smith then opens up about what a year it’s been, and pays tribute to his humble origins with a moving version of his first ever solo release “Lay me Down”, which is a humble ballad about vulnerability. It’s powerful to witness this.

Guy and Howard Lawrence take the stage after Smith. The two brothers have had quite a few good years of touring as Disclosure. They share that they’ve both been coming to Bestival “for years, ever since we were kids” which sounds funny as Howard just recently turned twenty years old. Regardless, they rip into a string of festival favorites such as “White Noise”, “Help Me Lose my Mind”, and “When a Fire Starts to Burn”, before inviting Sam Smith back out on stage to bring down the night with a rousing performance of “Latch” off 2013’s rhapsodic Settle. 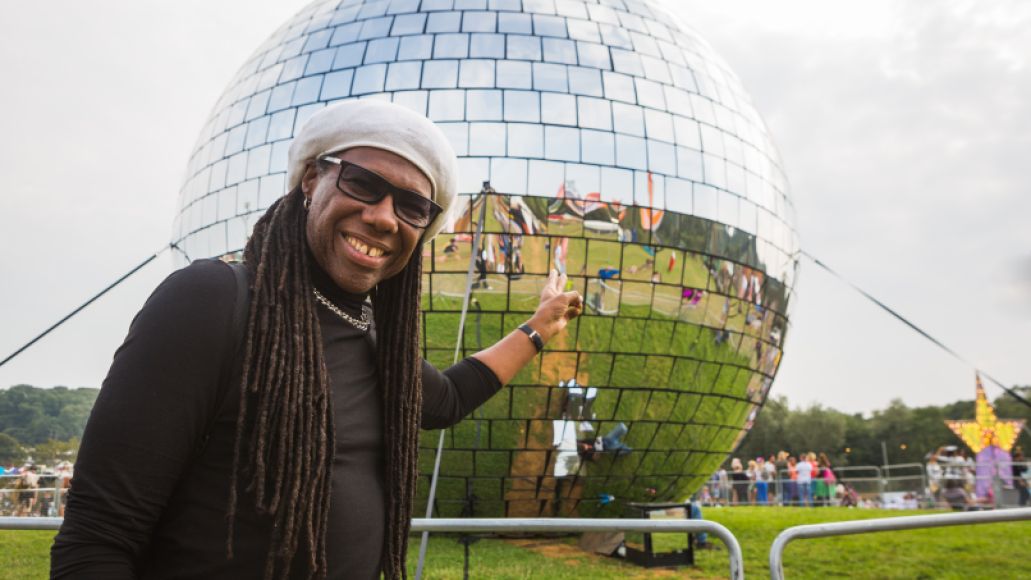 Several other major acts, including those wily ATLiens Outkast and disco legend Chic featuring Nile Rodgers, left their own indelible mark on this four day adventure with enthusiastic sets. London Grammar, Wild Beasts, and Foals, who used this occasion to announce their 18 month hiatus, also deliver an amazing series of shows. This is starting to get overwhelming, but in the best way possible.

Seeing so many musicians put me in the mood to see even more this fall. The collaborative work of Disclosure and Sam Smith put me in the mood to see Calvin Harris, who is known to have worked with all sorts of musical A-listers, while the Outkast reunion relit a fire that only Kendrick Lamar can extinguish, especially now that he’s dropping cool new singles off his upcoming record to follow up to 2012 groundbreaking good kid, m.A.A.d City.

Costume Day on the Campgrounds 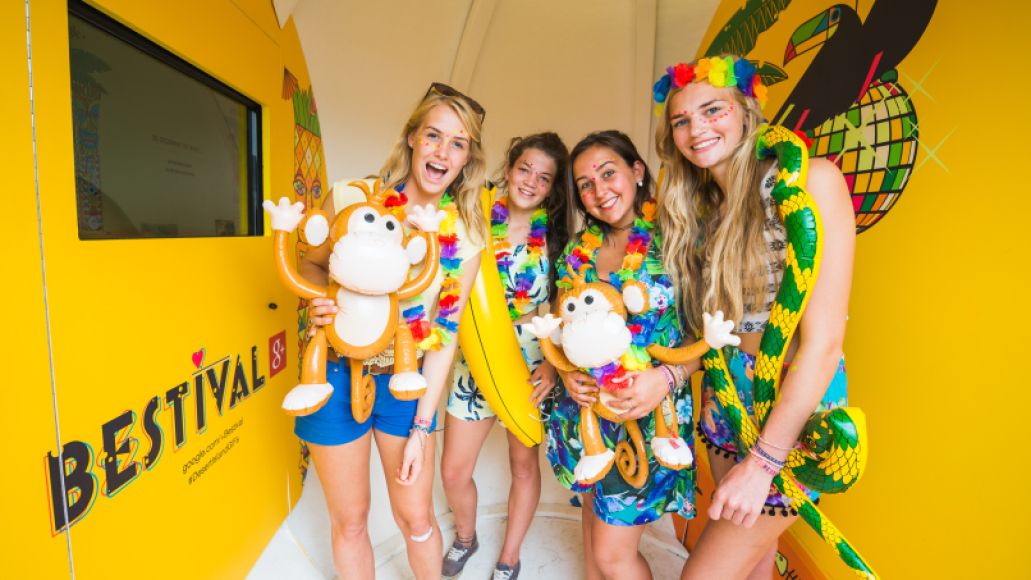 Although this was my first time at Bestival, it didn’t take long to figure out that everyone was excited about Saturday’s Desert Island Disco dress up day. I’d seen all number of bizarre get ups and kooky costumes already, but nothing could prepare me this. The Bestival campgrounds, which stretch a 45 minute walk in each direction, awoke dressed to the nines on Saturday morning. There was a little bit of everything: hula skirts, sharks, coconut headgear, life rafts, tropical birds, cannibals, castaways, Gilligan, and dozens of Wilson volleyballs. Things were strange and flashy before but now it’s leveled up to a new kind of silly fun. I never want to go back home! 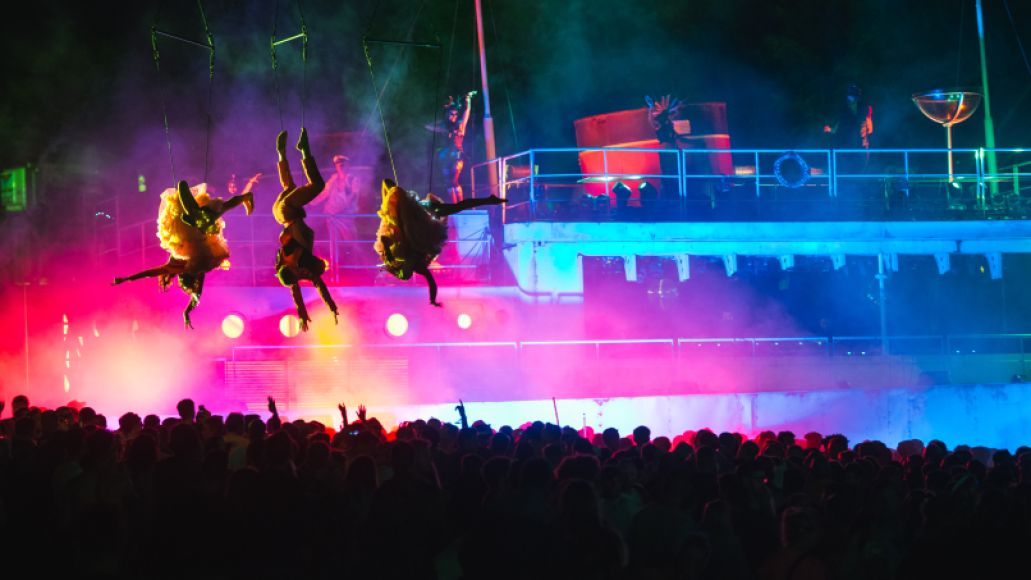 The Port, or HMS Bestival as it’s known by the regular attendees, occupies the space around a rusted out old ship that’s retrofitted with lights, turn tables, cage dancers, and flame throwers. This is by far the wildest section of the entire festival ground. It’s like a afloat upon a sea of gyrating, scantily clad bodies who reach for the sky as a crane swings go go dancers just above the crowd’s fingertips. Dancers with stilts do backflips while unicorns in bikinis goad onlookers into joining the fun. And then things got even stranger. 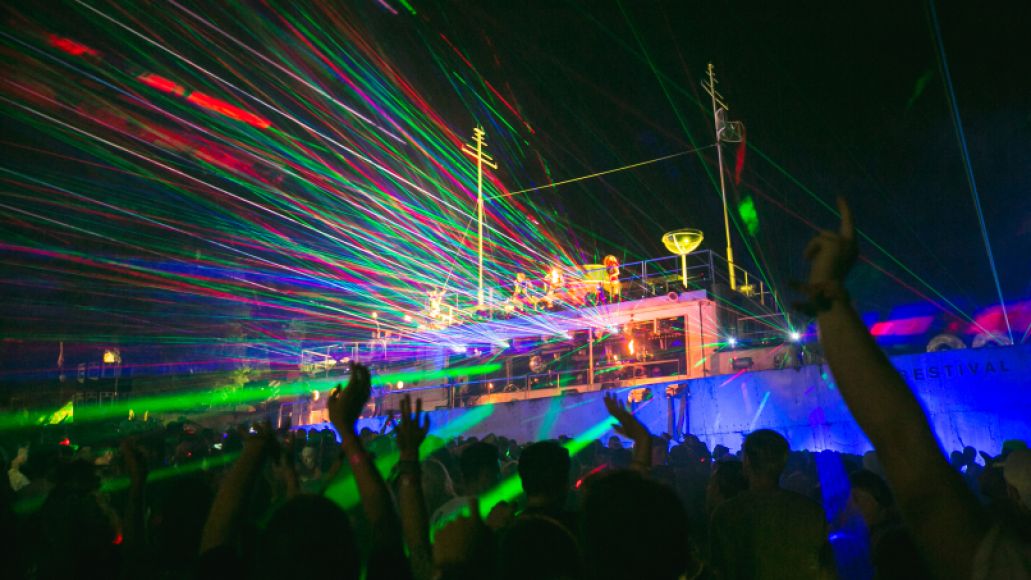 We’ve shared our own festival and travel experiences. Now it’s your turn to embark on your own adventure. Enter the BACARDÍ Triangle festival here for your chance to take in a number of amazing acts within the exotic Bermuda Triangle. Trust us, the journey will be just as exciting as the destination. And once you’ve arrived, Calvin Harris, Ellie Goulding, and your hero Kendrick Lamar will be waiting to greet you with music and the perfect BACARDÍ cocktail. Cheers. 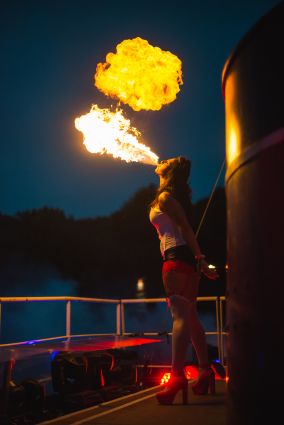 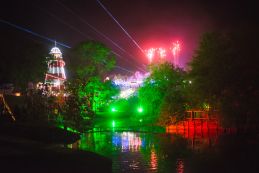 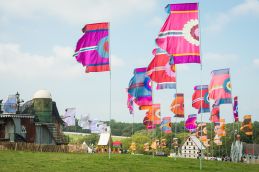 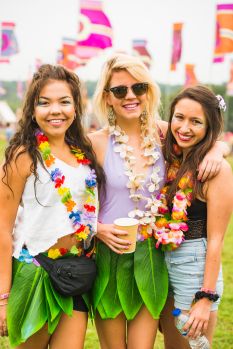 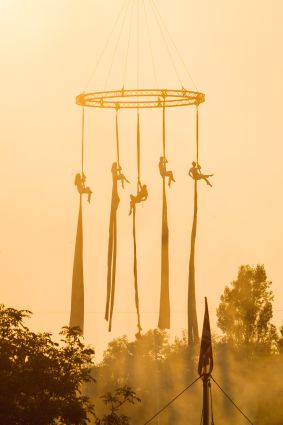 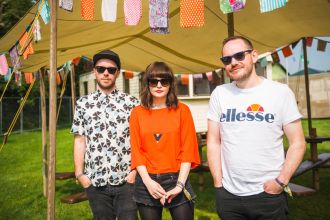 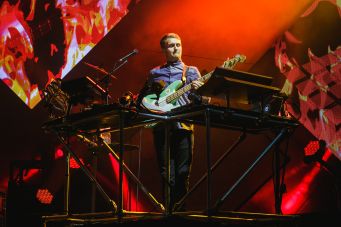 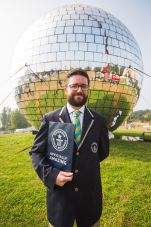 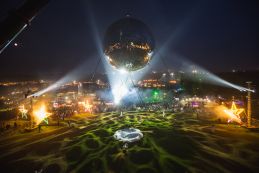 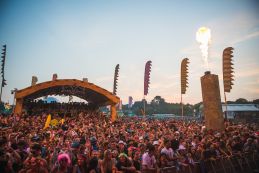 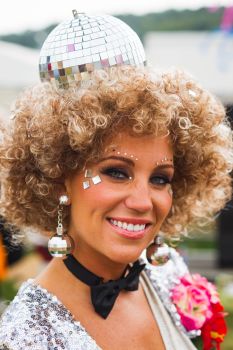 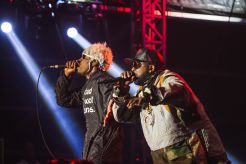 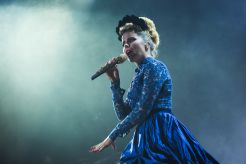