Photography by Ren Ralos. Video by Will Montage.

IT’S PROM, SUCKERS proclaimed the Jeff Koons-y metallic gold balloons arrayed on both sides of Webster Hall’s balcony Tuesday night. PUSSY POWER, read a hand-painted sign just below those. For the capacity crowd beneath, that meant confetti cannons, balloon drops, zero slow-dancing, and an all-girl band in cheerleading getups as prom queen Charli XCX, complete with a tiara, returned to NYC for her most triumphant performance to date.

The 22-year-old upstart– practically a pop veteran if you consider the music she was releasing and playing in clubs barely into her teens-— had plenty to celebrate: two hits in the Billboard Top 40 (the ubiquitous “Fancy”, with Iggy Azalea, and the much better “Boom Clap”), an exponentially growing legion of fans, and a new record, Sucker, due out later this year.

As such, the mood in the house ranged from jovial to ecstatic as Charli rolled through hit after hit, each prominently displaying the young songwriter’s penchant for penning hooks that satisfy while bucking expectations ever so slightly. Sometimes, though, those hooks have all the subtly of a bulldozer: cue Charli‘s previous ubiquitous hit for Icona Pop, “I Love It”, which the singer and crowd performed in giddy unison here.

Charli has streamlined her performance over the past year or so, refining her energy (which could tend toward sloppiness) and engaging her audience more readily — indeed she interrupted “Boom Clap” to call out some attendees for fighting, before asking if everyone was okay (apparently we were). “Fancy”, meanwhile, found Charli absent Iggy Azalea and rapping most of her parts, a moment which raised the specter of XCX incorporating hip-hop into her already many-layered pop casserole.

For now though, the vibe — heard on new tracks like “Sucker”, “Break The Rules”, and “London Queen” — is bratty and immediate, if a little juvenile.  The relative sophistication of a tune like “Nuclear Seasons”, itself notably left off the setlist, was missed.  Thankfully Charli XCX has already shown she’s not one to tread water.  There’s no telling where her instincts will take her next, but there’s a good chance it will result in something catchy as hell.

Opener Elliphant came out guns blazing, with all the aplomb of a performer working her own crowd. She’s an odd duck, to be sure: a lean, catwalk-ready Swede who dishes out a surprisingly convincing brand of hard-edged reggae-pop, patois and all.  She kept the energy in the red the whole time, did some gyrating that likely made most of the moms in the room (there were quite a few) blush, and looked like the happiest person in a place full of ridiculously happy people. Needless to say, we were won over.

Newcomer FEMME, meanwhile — who some may recognize as vocalist and collaborator in the Nigel Godrich project Ultraísta — felt a little more lightweight in comparison, though she gained confidence as the set went on, particularly after being flanked by a pair of “bullet girls” with whom she performed synchronized dance moves. Those moves garnered more whoops and hollers than the music, which was nonetheless an able mix of ’90s pop and girl group sounds that FEMME’s DJ, The Last Skeptik, wisely kept rolling out.

But one mustn’t overlook the scope of the lady’s talent: In addition to writing and producing all her own music, FEMME also choreographs the dances, directs the stylish music videos (“Fever Boy” is well worth a look), and designed the project’s tight visual aesthetic. These things matter in an increasingly transparent pop economy, and with any hope, given time and good fortune, they’ll pay off handsomely for an act like this. 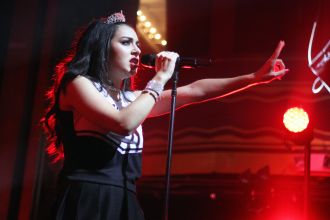 Setlist:
Sucker
Breaking Up
I Love It
Famous
SuperLove
Black Roses
Lock You Up
Caught In The Middle
I Need Your Love
Stay Away
You (Ha Ha Ha)
Money (That’s What I Want)
London Queen
Break The Rules
Grins
Gold Coins
Encore:
Fancy
Boom Clap