“I was a really good liar when I was a kid,” offers Isabella “Izzi” Manfredi from her seat in the labyrinthine basement of Chicago’s Double Door. She and guitarist Jack Moffitt are seated on a well-worn couch opposite me. We’ve met just after soundcheck, and with a couple hours before showtime, both are casual, cool, and confident.

Their band, the Sydney-based The Preatures, has been on a trajectory nothing short of ascendant since they formed in 2010. Sitting there in the moody dark, they bear the weight of accolades earned (major label contract, hit single, headlining tours, etc.) with ease. The only signs that betray Manfredi and Moffitt as soon-to-be-major-rock-stars are Moffitt’s just-so mop of curly, dark hair and Manfredi’s striking cover-girl looks, dressed down now but unmistakable.

When Manfredi hits me with the comment about being a good liar, her delivery is without humor or irony. I’ve just asked her whether she and Moffitt have always been “performers,” and after reflecting a bit, she seems to have decided that, yes, she has always been a performer and a damn good one at that. (Is she lying now? It’s impossible to tell.)

We’ve been talking about personae, in one form or another, since we sat down. We began as Manfredi and Moffitt discussed the relative merits of Bob Dylan’s albums and his shifting image (Manfredi’s explaining away Dylan’s less well-received albums: “That’s what happens when you’re prolific, you just put out everything.” She is kind.) Later we will discuss the “David Bowie Is…” exhibition at the Museum of Contemporary Art Chicago. But what we are talking around is the excitement and anxiety of the unknown future for a band with limitless potential and weighty expectations.

“Have you seen us perform?” Manfredi asks me pointedly. She grins when I shake my head no. She knows I’m in for a treat, and she isn’t wrong. Later that evening she’ll take the stage in her understated rocker regalia — skinny black jeans, white t-shirt, and black leather Moffittet. As she performs, the soft lines of her face tighten as she struts back and forth, all leonine grace — more Jagger than Dylan. Moffitt, attired similarly, adopts the confident power of a lead guitarist, never seeking the spotlight, but when the time comes to solo, he stands not on the stage, but astride it, legs bent, hips open to the crowd. His precise guitar work serves as the group’s engine while the rest of the band — guitarist/vocalist Gideon Bensen, bassist Thomas Champion, and drummer Luke Davison — provide a reliable platform, moving in and out of the spotlight themselves as the intricate pop rock compositions rise and fall.

The band is road-tested and play through the intricate changes with ease and subtle flourish. Their sound is rich and expert, their performance simply electric. If Moffitt and his guitar are the engine, Manfredi is the spinning chrome wheels; the band goes nowhere without her, and it is difficult to take your eyes off her as she performs. In this manifestation, she elevates her rock star persona into the realm of performance art. Careening about the stage, an infinite ball of energy, she shares her energy with the crowd and uses the physical expression of emotion to stretch the pitch ever louder, ever faster.

The Preatures formed in 2010 when Moffitt and Champion met Manfredi at the Australian Institute of Music. They added Bensen and Davison soon after and adopted the name The Preatures (changing it from Preachers). In the years since forming, the group have released two EPs (Shaking Hands and Is This How You Feel) and their first album, Blue Planet Eyes. Though the number of releases is limited, each shows a young band’s significant progress toward identifying and perfecting an original sound.

“Take a Card”, a standout from their first EP, has a swinging ’60s pop vibe and features alternating verses between Manfredi and Bensen. It features a clever pop hook but feels entrenched in the sepia-toned doo-wop nostalgia of the 2000s. Just a few years later, The Preatures wrote and released their biggest hit, “Is This How You Feel”. Comparing this track to their earlier ones demonstrates the miles of growth they have achieved in a short time. On “Is This How You Feel”, Manfredi’s strong range is front and center in the mix (though Bensen offers a low-end counterpoint throughout). The traditional pop structure is interrupted by an atmospheric bridge where Manfredi’s voice drops as she hums, “wanna wanna wanna know.” It is the kind of subtle but affecting moment that elevates a pop song toward pop-art, testament to a band still learning what they are good at and putting it to use. In 2013, the song won Australia’s prestigious Vanda & Young Songwriting Competition and pushed The Preatures to greater international popularity.

Back on the couch, Manfredi explains the band’s diverse output to date: “We’ve always just looked at songs and worked from what the song is doing and what is best for the song. The sounds always come as an aside to that.” Moffitt goes on to explain that it’s not that their output to this point doesn’t cohere, but that they’ve been writing on a song-by-song basis and not really thinking within the grander scheme of an album. Blue Planet Eyes was written by the band at home in Sydney but was recorded with Spoon’s Jim Eno at a studio in Austin, Texas (as Spoon was mastering They Want My Soul). Moffitt co-produced the album with Eno and says the two found a balance between being adamant about maintaining a sound and optimizing Eno’s expert ear.

The Preatures are currently on a headlining tour in support of Blue Planet Eyes and still adjusting to life on the road. There is an understandable weariness behind both of their voices as Moffitt describes hours spent staring out windows and the danger of getting too lost in one’s thoughts. Manfredi is excited because for the first time she can read on this tour and isn’t overwhelmed by a combination of anxiety and exhaustion.

Despite the trials of being on the road, the band is currently deep into planning their second album. Manfredi has taken over greater songwriting duties and spends most of the day humming melodies and writing lyrics in her head. “You can’t just sit around and do nothing,” says Moffitt. “For a lot of bands, they need time, but for us, we’ve realized that too much time is going to kill us. We’ve got ideas and those ideas only have a certain shelf life before their vitality starts to die.”

Manfredi struggled with a lull after completing the first album. “I haven’t really listened to music this whole year on tour,” she explains. “And that was hard. I started to hate everything: If it’s good, it pisses me off, and if it’s bad, it just makes me angry.” Living in post-album depression can be rough, but for Manfredi, a spectacular piece of music shot her out of it: “Someone played that War on Drugs record for me. I just keep playing it over and over again. Stuff like that makes me have faith in music again.”

Here on the couch, with everyone calm and relaxed, the pressures of life on the road seem far away, but their impact is deeply felt. For Manfredi, there seems to be comfort in separating herself from that experience through the guise of persona. “I’m my best when I’m not myself … I like how Bowie used to make characters out of the worst parts of himself and blow them up and make them almost idols. It’s almost like you can excavate yourself.” She goes on to describe how when she takes the stage now, she imagines an athlete who is very “active and strong,” a direct response to being “probably the least athletic person.” “I think it helps when you’re not responsible for what you’re doing onstage. And that’s where a character comes in. It helps you to tell more of the truth … You’re breaking and remaking yourself.” Moffitt agrees that persona-making can act as an act of catharsis and self-reveal: “For every ounce of healing you have to go through the ringer … it’s the same for anyone who is trying to figure out the best cumulative version of themselves.”

The act of constantly “breaking and remaking” is both dangerous and exhausting. One never knows what new version of the self will emerge. Just five years into life as a band, The Preatures have already cycled through several intriguing iterations and are much improved for it. Their studio work is polished, while their live performances earn new fans at every stop. The further they travel, the greater momentum they gather — potential energy that has the power to erupt or consume. Either way, once The Preatures emerge from the coming break back home in Sydney, they are likely to emerge changed but one step closer to the best cumulative version of themselves. 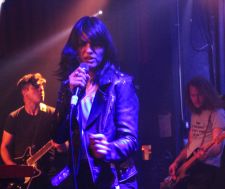 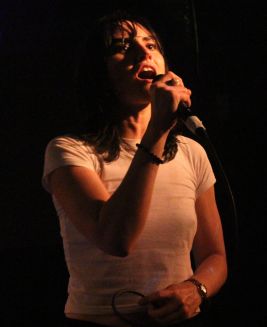