From the very moment it was announced, Bacardi Triangle was destined to be ridiculous. The four-day event brought 1,862 guests — a clever nod to the year Bacardi was founded — to Puerto Rico for an all-expenses-paid adventure of EDM artists, outdoor dancing, and seemingly endless rum. Three charter flights brought out winners from New York City, Los Angeles, and London, while press and social media influencers came from all corners of the world. It was ritzy. It was gaudy. But, in the end, the excess of money began to lose its appeal in the way only corporate events can make possible. Turns out dollar bills are like Monopoly money, and Bacardi can zip you from a plastic car to a tropical mansion in one roll of the dice.

Immediately after exiting my plane at 8 a.m., I ran into a man from Mumbai and another from Canada. The latter worked for Bacardi. “We went to Walmart yesterday and swept $200 worth of face paint into our cart for the dance,” he said proudly, referring to the upcoming zombie-filled Halloween dance at the resort’s private waterpark. “This weekend’s going to be crazy.” The drowsy bunch that had gathered at baggage claim boarded a shuttle bus to the hotel, and the farther we drove, the more obvious it became that we were out of our comfort zone. While the Canadian man yammered on about his excitement to see the performers — Ellie Goulding, Kendrick Lamar, and Calvin Harris — vibrant green mountains rolled by in the distance against a misty sky. Lest we forget America owns Puerto Rico, the roads were sprinkled with their fair share of Church’s Chicken and, of all chains, Blinds To Go.

A festival with no real objective — or rather one inviting patrons to “just have fun” in the guise of exclusivity — burns through its fuel quickly. Thankfully, Bacardi Triangle wasn’t about stuffing every hour of your day. It was a three-day break, and they knew how to do that just right.

The massive El Conquistador Waldorf Astoria Resort left every jaw on the floor. It was decked out with pop-up bars and glimmering DJ booths, trivial additions to a hotel that already boasted 23 restaurants, a handful of pools, and a tropical golf course. When the days began to blend into one another and umbrella-topped personal pineapples lost their appeal, world-renowned bartenders could offer you a spray of champagne for the hell of it. So goes the overdose of free riches. Forget about stacked festival lineups with rigid to-do lists. Bacardi Triangle had no real structure, no real rules, and no real ways to measure its success. As a result, the party factor rode upon its attendees: Playboy bunnies, a candidate from The Bachelor, and that kid who breaks into festivals. Everyone began to look a little more human against a backdrop of rain-tipped palm trees and a giant, giant hotel, making for the most Real World experience of any festival this year. Without the comfort of a stage to watch, people peeled out of their caricature skins. If only every festival offered this kind of reveal — and for free.

The whole weekend built up to Saturday night, an evening with three of the industry’s biggest stars (Goulding, Lamar, and Harris) on the mysterious Palomino Island. If anyone was upset about the insane ferry line to get over there, they were handed a free coconut filled with Bacardi. Should that, too, not be enough, a guy dressed as Tom Hanks à la Cast Away floated in a raft beside the ferry’s exit, hugging his beloved Wilson, before the crowd was greeted by fire dancers and a buffet of local cuisine. But, unlike the women roller skating at one pool party or The Cuban Brothers’ partially nude DJ set, almost all of Saturday’s performances were entertaining from start to finish, tossing staged gimmicks to the side to see musicians acting like (gasp) humans.

There was no bigger surprise than Ellie Goulding. As someone who rocketed to fame to ride radio waves, she could easily be a diva. Instead, Goulding was approachable. She started a conga line on her flight down to Puerto Rico, invited fans to run with her when jogging at the on-site gym, and talked with those who recognized her beneath her Halloween costume the night before. So, when she took over the giant triangular stage on the island, it was satisfying to see her parade around performing “Figure 8” and “Anything Could Happen”, even taking out her guitar for closer “Burn”. The only sour note came in a brief cover of M.I.A.’s “Bad Girls”. What normally looks like a nod to a fellow powerful females came across as rather trite thanks to a brief media Q+A earlier that day. One journalist asked for her thoughts on “this whole feminist thing going on right now” only to have Goulding mutter, “Sorry, I have a lot to say about this subject and, uh, that’s a big question for a different time. Let’s try to keep this happy.” The weekend may be about partying, but when you’re the only female on a bill and get the chance to speak up about equality, you take it. Come on, Ellie.

Then came Kendrick Lamar. Usually brooding with his hood up against a sea of iPhone flashes, K. Dot showed up to Puerto Rico with a crew of almost 40, ready to relax. In true tropical fashion, a rain shower delayed his set, but the local’s mantra (“If you don’t like the weather, wait five minutes”) kept him at ease. The Compton rapper flashed his teeth nonstop through “Bitch Don’t Kill My Vibe”, “Poetic Justice”, and A$AP Rocky’s “Problems”. Eventually, Jay Rock ran onstage for “Money Trees” and performed his own “Pay For It”, but few crowd members noticed. This was about drinking yourself into a stupor, not seizing special guests. So when Lamar smashed a birthday cake into his DJ’s face and got frosting on his own “i” baseball cap (shameless self-promotion 2.0), the audience cheered, but he launched into his new single regardless, lighting up the stage in undoubtedly the best performance of the weekend.

Calvin Harris was the exact opposite. Supposedly he flew in on a private helicopter, denied photographers pit access, and took off the next day for another show. Then again, his extravagant show did have diva written all over it. The EDM favorite shot out confetti, smoke, fireworks, and vibrant digital visuals, song after song. “Under Control” and “Summer” won over the crowd, as did his Kiesza and Florence & the Machine remixes, but there was no noticeable variation from the recorded version to the live version. Harris did little to prove the “Electronic musicians are lazy” line wrong. If you’re paid a casual $1 million to play at a private event, then there’s no real need to rise to the occasion. Despite the cheers, as the final act of the weekend, he failed to keep the attention on him, even with six free cocktails a day egging on the crowd. After a breezy boat ride back to the hotel, people hopped off for a late swim, personal pizza, or final saunter at the afterparty before departing the next day in a drunken haze.

If there’s ever a time to uphold solipsism as the truth, this was it. Was it all a dream? Visually, Bacardi Triangle looked extravagantly out of hand. The bills would conclude similarly. Every sip of rum and gracious hosting kept the smiles wide all day long, but throughout the entire event, there was never a sense of camaraderie. There was no communal gasp, no chant for an encore, and no lasting feeling of friendship. Expecting a sense of community at a corporate party is naïve, but in a way it made sense. Bacardi was bold. They didn’t hop on to a pre-existing event. They made their own getaway to celebrate their success. We should all be throwing our drinks up in a toast to Bacardi. But then, sitting in the airport looking around at everyone, I realized we were — virtually. Every exhausted patron at the airport was busy texting crazy stories to pals about the as-promised ridiculous weekend that just took place. Bacardi Triangle did it right — especially given none of our planes got lost. 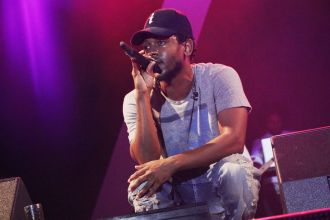 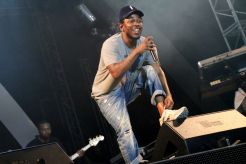 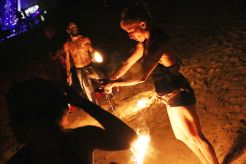