There are reasons that outdoor music festivals in February aren’t a thing. Namely, the weather. Even in typically sunny Southern California, even as the region tries to pull itself out of a draught and has been enjoying unseasonably warm weather all winter, even when the music festival is tagged as a ski and snowboarding competition — there are still reasons why Air + Style was destined to disappoint. Today is the second day of the event, and it is forecasted to rain. Couple that with the fact the Academy Awards are the marquee event for the region on this Sunday and the fact that the festival disappointed on its first day, and, well, you can understand why we’re just writing this review rather than taking in another day of tunes.

So, yeah, poor planning was part of the problem this weekend at the grounds surrounding the Rose Bowl in Pasadena, California. Lines for beer and bathrooms were reported in the 30-minute to one-hour range at peak, which is just unacceptable. Who knows how long the food truck lines actually took, as they were just too lengthy to even consider waiting in. And the music, which was slated to be a marquee attraction, was muted throughout the event (especially on the main stage), with no real explanation as to why volume was an issue at a music festival.

We’ll let the blurbs explain more of why the music was very hit and miss on the first day of Air + Style, but before, we should note that the sporting aspect of the day seemed to be its best offering. The coverage of the event is partnered with ABC and ESPN and was filmed for television, so that shit was all pro, all the way. The ramp that was constructed was gigantic and impressive. Organizer Shaun White dabbles in both the extreme sporting world and the music world, but it was very clear, both from watching his band and from attending his event, that he is much more adept in one than the other.

Most Disappointing Set … Maybe Ever

Wait, what? How could the best artist on the bill be the worst set of the event?

We were shocked, too.

It’s hard to say whether the performance would have still been massively disappointing had Lamar started on time and not 15 minutes late and had he ended on time and not 40 minutes early. But what little he did rap (he let the audience handle about half of the words for him) was made worse by the fact that it was all the same old songs he has been performing live for nearly three years. He touched on all the big hits from his now-classic LP, good kid, m.A.A.d city, including three runs through “m.A.A.d city”, and a couple trips through his “Fuckin’ Problems” verse. Essentially, despite the new music that he has released into the world as of late, he didn’t perform any of it, sleepwalking his way through a tired-ass setlist.

Before the final time he played “m.A.A.d city”, Lamar asked for more volume, voicing a complaint that most attendees also empathized with, that the show was too damn quiet. Lamar then said that the organizers threatened to shut him down if he played any louder. At this point, a member of his entourage came out and whispered into Lamar’s ear, with Kendrick saying, “No, we’re gonna play one more” before launching into another run through “m.A.A.d city”. After finishing, Lamar announced, “I’ll be back” and ran offstage with 40 minutes left on his slot.

Fans stood around for about 20 minutes, slowly trickling away, chanting “Kendrick” at times, before an MC came on and announced that the snowboarding finals would soon begin. Who knows whether Lamar just bailed on the set or whether he got shut down, but regardless, it was flat-out awful and disappointing and made the entire event feel like a waste of time. He was the headliner! He was why many of us were there, why we had waited in long beer lines and food lines and bathroom lines. People made signs for Kendrick, asking him to save real hip-hop. But instead of throwing a life vest, he turned his boat around and sped away. Any way you slice it, it was one of the more disappointing musical moments in recent memory, and both the organizers and the artist look pretty bad in light of it. –Philip Cosores

Let’s start with the good things: Shaun White and co.’s instrumentals and melodies were on point, straight-forward pop rock tunes with just enough bite to be edgy and still accessible. It got the crowd dancing early on in the afternoon. On the other hand, frontman Davis LeDuke took it upon himself to act like a petulant child hiding behind his hair, throwing a temper tantrum for most of the show. One song into the set he sneered a “What’s up, fuckers?” at the audience and kept that similar rude, sarcastic tone through the rest of the set as he spent much of it with his back towards the crowd or lying on the stage, completely away from anyone’s view. Chucking nearly full water bottles with full force into the crowd (two of which nearly hit me square in the face) isn’t only not cool, but it’s pretty unsafe, too, so maybe cut that out. Hey, Davis? I know you’re trying to pull off that whole “asshole rock star” vibe, but it isn’t a good look. We’re not saying you have to be the happiest frontman on the planet — we all have bad days, and maybe yesterday was one of yours — but trying to treat your audience with a bit of respect will go a really long way; acting the opposite, as you did yesterday, sticks with people, too. –Tarynn Law

One of two DJs thrown into the day’s festivities to get the EDM crowd to attend (the other being Sunday’s headliner, Steve Aoki), the chatter that I had heard amongst the crowd gave me the impression that there were a lot of people there for one of Mad Decent’s biggest stars, Diplo. Attempting to go into his set with an open mind, considering the misogynistic comments he made two weeks ago, it was for the most part a harmless DJ set where he played hit after hit (the Yeah Yeah Yeahs and ZHU samples were a nice touch), and listeners went wild, prompting one attendee to throw a ton of glowsticks into the crowd. Towards the end of his set, he brought a few girls on stage to dance in front of his setup, but in classic Diplo fashion, he quickly threatened to kick them off stage for trying to snap a selfie as one would be prone to do in their situation. His crowd seemed to have the time of their lives, and the music provided a strong soundtrack to the much more enthralling snowboarding finals going on directly next to his set, but it was all a bit forgettable once it was over. –Tarynn Law

Kicking off the festival were Teenage Wrist, a brand-new band out of Los Angeles. While their identity still remains a mystery on their social media pages, a bit of digging will lead you to the premiere of their lone single, “Afterglow”, from the end of last year, where we find out that it’s the new group from Kamtin Mohager (Chain Gang of 1974) and Marshall Gallagher (Swing Hero). Starting the day off on a strong note with their ’90s-influenced garage rock sound, it was clear that Mohager and Gallagher know their way around a melody from their other projects, walking a fine line between dirty, straight-forward rock and roll and pop-laced alternative that could earn them some strong radio play in the future. Their set was energetic and reminiscent of bands from the early ’00s that were loved so much for their “no bullshit” attitude and killer guitar tones. –Tarynn Law

In The Valley Below

The early part of Air + Style was notable for its rising bands, and In the Valley Below stood out as the best of the bunch — aside from the music, which failed to make much of an imprint given the surroundings. ItVB made its mark in subtleties. Frontwoman Angela Gail used a large, metal chain as percussion, and she and co-lead Jeffrey Jacob shared a microphone stand that housed both of their mics. It was all cool and different and made them stand out in a situation where it is hard to do such. As for the music, it was safe and pleasant. –Philip Cosores

There had only been one band on the main stage at this point, so when Phantogram took the stage it was quickly noticed that something was … off. A band that normally slay performances both in festivals and in venues, their first few songs (even single “Black Out Days”) seemed subdued and quiet, two words that no one who has seen the New York-based band before would ever use to describe their set. Listening in on the chatter around me, it was the general consensus that the sound guy desperately needed to turn the overall volume up, a favor which never happened. Despite that, they delivered the strongest performance of the day to that point, as the always charming (and hilarious) Sarah Barthel strutted around the stage in sequined leopard-print pants and a leather jacket, her trademark bob hairdo whipping around flawlessly to their dark synthpop tunes. Barthel and her partner-in-crime Joshua Carter proved once again that they’re one of the strongest bands in alt rock at the moment, and hopefully we get some new tunes from them soon. –Tarynn Law

Black Lips may have recently lost a founding member, but their remaining leads have personality to spare, and the loss of Ian Saint Pé wasn’t felt much during their performance of beloved songs “Family Tree”, “Modern Art”, and “O Katrina”. Cole Alexander joked repeatedly about the atmosphere, joking that founder Shaun White found him in a half-pipe to personally invite him to perform. Alexander seemed to be in awe of the size of the event’s huge ramp. The band didn’t bring their toilet paper fight to the event, but you have to figure they wanted to leave something for their appearance at Burgerama next month. –Philip Cosores

If you weren’t interested in seeing Diplo throw down some tracks during his set, thankfully there was another option (and my preferred one of the two) — catching beloved Portland (via Alaska) outfit Portugal. the Man, backed by some eclectic, trippy visuals that were a perfect compliment to the band’s hypnotizing psych pop sound. Part jam session, part hit-filled set (2010’s “People Say” was a particular highlight), it was a welcomed respite from Diplo’s throbbing beats and a breath of fresh air during a festival that seemed to stagnate after Phantogram and METZ’s performances earlier in the afternoon. –Tarynn Law

METZ played in the middle of the day, on the smaller stage, with little fanfare. But way on the other side of the grounds, their presence could be felt, with screaming audible from a distance that defied reason. Unfortunately, not many answered the call of the pied piper to their blistering brand of pulverizing rock. And, likely, this will continue throughout their career. But you don’t make music most remarkable for how far away it can be heard if you want to attract the masses. METZ isn’t about that. It’s about emotional release. And getting fucked up. Pretty sure a lot of the songs are about getting fucked up. –Philip Cosores 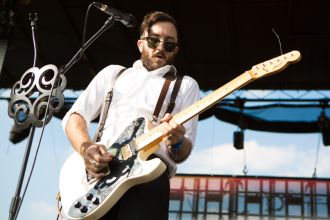 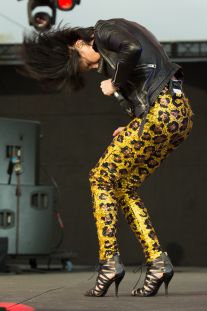 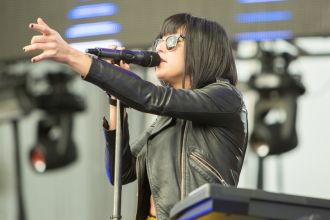 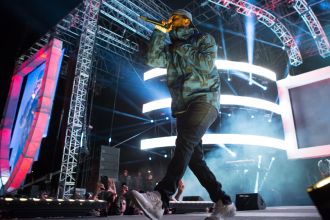 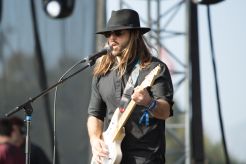 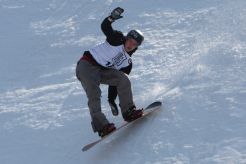 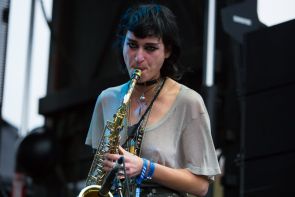 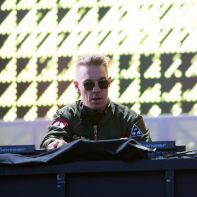 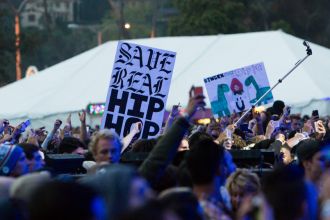 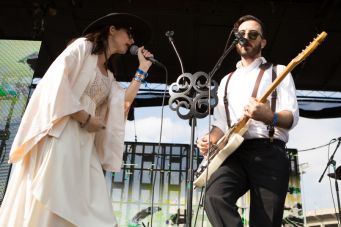 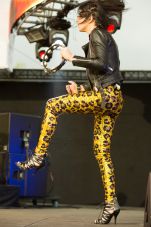 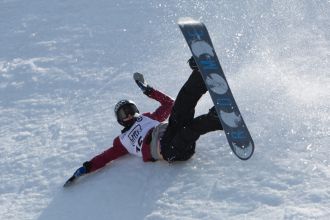 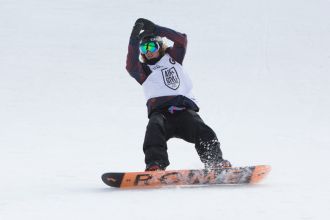 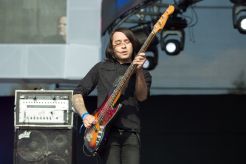 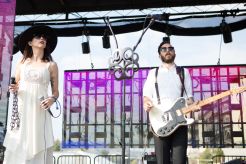 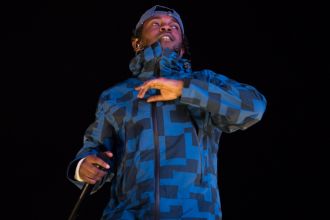 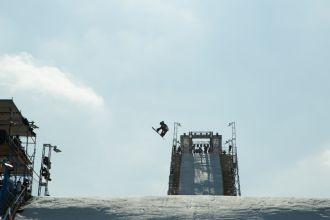 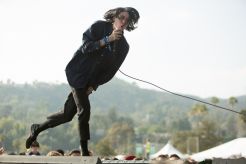 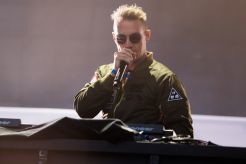 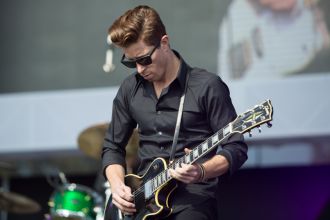 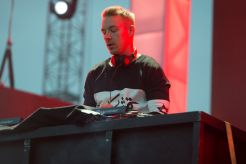 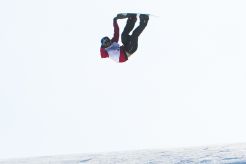 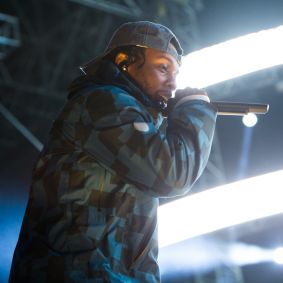 Air + Style from Worst to Best