“Words and guitar.” Those few words, sung with the fury of Corin Tucker, exemplify the essential power unlocked by the return of Sleater-Kinney. Hearing them live again served as the rallying call we all needed, a back-to-basics howl that enlivened the packed, incredibly enthusiastic crowd at Chicago’s Riviera Theatre, a group of people who needed powerful, passionate rock ‘n’ roll heroes ready to deliver a smash of words and guitar without any added bullshit. Sleater-Kinney more than delivered.

But unlike many reunion tours, the beaming faces, bouncing heads, and shout-sung words weren’t reserved or even heightened for the old material. No, the songs from No Cities to Love got just as much love, the packed house clearly full of ears hungry for Sleater-Kinney, fans for whom Tucker, Carrie Brownstein, and Janet Weiss aren’t just a band, but a favorite band. That hunger redoubles, too, when it’s been just about nine years since the last time that favorite band played your town.

The love wasn’t one-sided, either, as Brownstein made sure to note that Chicago is the “kind of city you look forward to playing,” even if it was more than a little cold outside. But “we’re inside,” she was quick to note, before tearing through another one of the band’s many heavy-hitting numbers. Other than a couple of brief thank yous, Sleater-Kinney kept their set tight and to the point, reserving their energy for the songs. And while Brownstein kicked as high as ever and Tucker’s vocals shredded as much as they did pre-hiatus, Weiss’ drumming provided a massive, amazing base for them to work off of. Her bass drum boomed, and every fill combined an astounding amount of dexterity and power.

While the Riv isn’t a favorite venue of any Chicagoan I’ve spoken to, the faux stone wall and pulsing light show the trio played in front of gave the old theater a sort of primal energy. It seemed as if both the band and the audience picked up on that, every song at or above its recorded tempo, every line roared right back at the stage. Tracks from No Cities already reveled in that “us vs. them” power, and that emboldened the live experience. Though nowhere near as tested as their older material, songs like “Surface Envy” (“We win/ We lose/ Only together do we break the rules”), “No Cities to Love” (“It’s the people we love”), and “Gimme Love” (in which Tucker shared the mic with whatever audience member happened to be within arm’s reach as she walked the front of the stage) were received giddily.

While many reunion tours give old songs fresh muscle, the one-two punch of “Entertain” and “Jumpers” closing the set felt as if the band had never left. During the encore, the trio dusted off “I Wanna Be Your Joey Ramone” complete with a lyrical update: After dedicating the song to Kim Gordon, Tucker changed the second chorus from “I wanna be your Thurston Moore” to the former Sonic Youth bassist instead. The encore was loaded with old-school fan favorites, but none held the allure of finale “Dig Me Out”, sending the entire room out into the wintry night with smiles. It’s good to have these rock heroes back. Hopefully they’ll stick around for a while.

Setlist:
Price Tag
Fangless
Start Together
Oh!
Surface Envy
Words and Guitar
No Anthems
What’s Mine Is Yours
Get Up
No Cities to Love
Youth Decay
Light Rail Coyote
A New Wave
One Beat
Bury Our Friends
Good Things
Entertain
Jumpers
Encore
Gimme Love
I Wanna Be Your Joey Ramone
Little Babies
Modern Girl
Dig Me Out 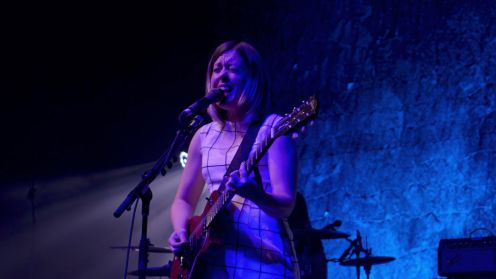