This past week, comics, podcasters, and chuckle bums all gathered in Austin, Texas for another go-around at South by Southwest. While comedy is easily the smallest slice of the music, tech, and film pizza, it’s by far the yummiest, especially if you’ve got a taste for satire and wizened life advice. Sure, musicians fire off the occasional criticism at a showcase, and amazing documentaries hit the screens each and every year, but the live comic’s real-time commitment to humor and truth allows these wise-cracking mercenaries the freedom to say whatever they want in its rawest form.

And this year’s comedy clowns delivered a much-needed moral defragmentation to those who stopped by to watch. Heated discussions about what’s right and wrong in the world, surprise drop-ins, free Fleshlights, and a crude Yeezy impersonation all made for an uproarious SXSW comedy extravaganza. So, if you were understandably preoccupied last week catching buzz bands or must-see films, we’ve got you covered. Here’s a highlight reel of some of the best comedic performances and moments of SXSW 2015.

Click here to see our full coverage from SXSW and listen to an exclusive playlist.

Sanz was in town to record the latest episode of The Hooray Show. Yeezus effing Christ! He murdered CBB with his Kanye West character, keeping it locked down with a backward flannel and hater blockers. Aukerman was just a few minutes into greeting guests Colin Hanks (All Things Must Pass), Lauren Lapkus (With Special Guest Lauren Lapkus, Orange Is the New Black), and Nick Kroll (Adult Beginners, Kroll Show) before Sanz aired dirty laundry about Kim, Grammy scuffles, and all sorts of sage albeit unpopular wisdom, such as encouraging teens to join ISIS. For shame, Kanye!

It was a treat to watch the first-ever pair up of Sanz and Kroll on the CBB podcast. They have brilliant chemistry. Kroll channeled his own inner Sylvester Stallone to discuss misbehavior with groupies and followed with Spanish language radio DJ Chupacabra. Lapkus and Hanks wiped away rivers of tears as Sanz exposed Ye’s “erect full-blooded penis” via a nifty rubber sex toy hung upside down and tugged through his jeans. No less, right in front of Scott’s middle school-aged nephew, Todd. Ye, get it together, man!

Those lucky enough to witness this grandstanding caricature were sure to return for Sanz’s next appearances on Matt Besser’s Improv4humans podcast recording, as well as on his own podcast, which was recorded in the intimate black box theatre, The Hideout. Some of Sanz’s early crowd work revealed a not-so-happily-married couple. An anxious yet hilarious tension palpitated among audience and performer alike, until Aaron Neville slid in to smooth it all out. All week long, Sanz’s performances in a number of podcast, sketch, and improv shows just kept getting weirder. But hey, that’s the way they like it in Austin. 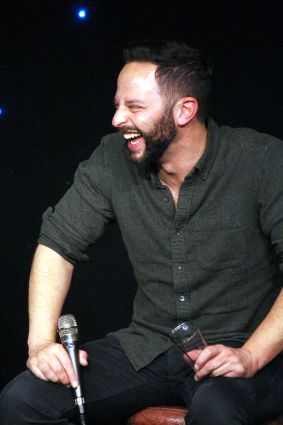 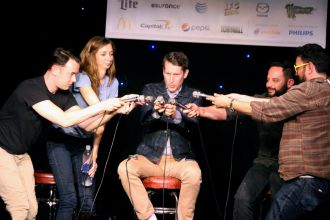 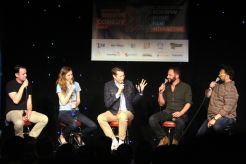 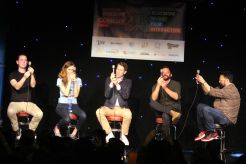 Eric Andre took the Loud Village Presents stage casually with a Fleshlight hanging limply from his groin. It would have been great to watch Andre and Sanz’s Kanye West engage in a mine’s bigger than yours face off, but alas, a missed connection. The 31-year-old comedian doubled down on the gag by burying his mic deep and cozy into the nether regions of a second one. “I’m not in Fugazi,” quipped Andre as he fingered the branded sex toy. “I sold out. Sorry, Ian! MacKaye! MacKAYE!” He also riffed on the difficulty of finding accommodations during the festival: “I slept in a boxcar last night, #NoHobo.”

Surprise: Hannibal Buress hopped on stage for a wild impromptu stand-up set, too, utilizing house band Never Shout Never for rimshots on demand. Buress co-hosts Adult Swim’s The Eric Andre Show and has had quite a busy, busy social media year. But he’s remained funny throughout it, and everyone was happy to see him. Buress galloped through the Lone Star State to promote Broad City, a series defending its own self-evident championship belt as the funniest newcomer to Comedy Central. Buress also popped in at a number of gigs and even filled in as a makeshift drummer for Speedy Ortiz.

Part of the fun of SXSW is that you never really know who is going to show up and who is going to skip town. It’s only been a couple of calendar years since Drill Music poster boy Chief Keef cancelled his sets due to a pesky house arrest situation and just 12 months since Lady Gaga brought out a vomit-filled sidekick to help turn her Stubb’s set into a heaving night of entertainment. So, you can imagine the gleeful shock of fun when Sinbad stepped out to share a stage with Bill Burr, Al Madrigal, and Nick Thune at Ester’s Follies for a live recording of The All Things Comedy Podcast.

Burr and Madrigal — both co-founders of the All Things Comedy network — had just wrapped an earlier in-depth panel discussion with Doug Benson, who comes out every year for SXSW Film screenings and to record episodes of his own shows, Doug Loves Movies and The Benson Movie Interruption.

“Owning Your Own Work” became the theme of the day as the discussion centered on the challenges a performer must overcome in order to balance autonomy and dignity in a profession that’s easily co-opted and cynically for sale. Burr shared the challenges of getting established and learning to balance your own inner worth among a sea of nitwits, adding: “Don’t give away anything you create. If you’re creating something, then why should someone else own it?” He also commented about the concrete drabness of the Austin Convention Center’s own seminar halls, much to the delight of the mostly SXSW Interactive crowd.

This ticked-off energy continued later in the day as Sinbad shadow boxed with Burr and Madrigal over his own career choices years back, such as agreeing to appear as the backyard birthday entertainment for a one-percenter’s teen daughter. That party in particular started with a towering Sinbad hiding behind a tree until he was instructed to come out and make with the yucks. Burr and Sinbad couldn’t reach an agreement about everyone having a price.

But their lively jabs and comebacks, peppered with clever interjections from Nick Thune, reached its zenith when they all started teaming up on Madrigal, whose professional background found him downsizing employees on behalf of the HR department at his mother’s company. Madrigal shared that his technique for eliminating redundant employees was focused, efficient, and private. That’s when Sinbad — a self-professed conman always hip to the next scam — pointed out the best way to counter these sinister HR meetings: “We don’t need to step into your office. Just go ahead and say what you were going to say to me here, in front of everyone. Well?!” It brought the house down, leaving the crowd and performers alike thinking about the compromises we all make in order to survive and the courage it takes to fight the powers that be, whether they pick up your tab or not.

The official kickoff of SXSW Comedy started with a table read of the pilot script, “The Embassy”, co-authored by pals James Adomian and Scott Aukerman. It was a tale of international intrigue and secrets that centered on shifty whistle-blower Carston Vermouth’s website Lookylooks.com, based on firebrand journalist Julian Assange and his infamous Wikileaks. Aukerman provided the stage direction while panelists Colin Hanks, Lauren Lapkus, and Horatio Sanz lost themselves in a number of silly characters. But it was Adomian’s multitude of spot-on voice mimicry and private mirror gesticulation that stole the day.

“The Embassy” posited Vermouth seeking refuge and carnal fulfillment in the fictional land of Costa Verde, whose hornball Ambassadrice found Lapkus pulling on her inner Eva Perón as she strived to get our hero to reveal more than just his secrets. Adomian followed this character performance with another tour de force. He hosted his own curated stand-up comedy gathering – Adomian & Friends – later that evening, stunning the crowd with impersonations of Louis C.K., Paul Giamatti, and Kevin Spacey, plus an interesting montage of Ian McKellen and Patrick Stewart, who may in fact be the same person.

The all-star collection featured acts like Iliza Shlesinger, Nick Kroll, Ben Roy, Wyatt Cenac, along with a frenzied Todd Glass, who rose to the occasion by confronting a boisterous audience member who mistook his Interactive SXSW badge as a license to interrupt. Glass delivered an uncomfortable but deserved sort of justice. A giggling Adomian leaned in from offstage to witness this public execution before sneaking into the crowd to heckle Glass with his own version of “Todd Glass”. The real Glass – trembling with a manic excitement – embraced Adomian after the show, recognizing him as one of the greatest voice actors and original performers going today.

Photo via Above Average Productions

Shannon O’Neill stunned audience members and performers alike after flexing lightning-quick reflexes and a dark encyclopedia of wit across several shows. The New York-based improv comedian and noted UCB Theatre teacher skulked like a bloodthirsty jaguar, stalking unwieldy sketches and then pouncing in for the kill. She turned the premise volume up to 11, again and again.  Whether flipping the hyper-meta switch by twisting a serial killer murder house tour scene on its head by introducing a secondary, more professional tour, or bemoaning an impromptu Family Feud segment that didn’t include deepthroat as an erogenous zone, O’Neill’s patience and sophisticated edits displayed years of honing.

She had the nimble dexterity to roll with the likes of UCB co-founders Matt Walsh and Matt Besser at a moment’s notice, as well as the lifeguard skills necessary to resuscitate a number of scenes from the depths of improv purgatory. Comedians love to get silly, especially after an exhaustive weekend of day drinking in the Texas sun, and that’s where O’Neill’s real talent came to the forefront. Whether she was shaken with Besser for crashing a predator drone into her baby, chatting it up with ponytailed Walsh who ranted as Willie Nelson’s Tea Bagger brother, or sharing morbid childhood tales of using her real-life fake tooth for mean pranks, O’Neill was ready to rumble and on point all week.

The Funniest Comics of SXSW 2015