Much has been made about the legitimacy of live electronic acts, but that’s simply hot air from those who simply don’t get it or don’t want to get it. To watch Clark and Nosaj Thing play a back-to-back set was a joy, not only because of the excellent music, but because these two musicians exude their own personality and style through their stagecraft. Clark constantly tweaks and turns knobs as if he were slowly and painfully releasing every sound from a massive cauldron of swirling noise. Nosaj Thing, on the other hand, was calm, cool and collected – gently releasing samples and synth washes with a tap of a pad. Both engrossing in their own fashion, they highlighted how varied and entertaining these shows can be.

Clark immediately began his set with a bang: bone-rattling bass throbbing throughout the hall, constantly pulsating as twinkling synths arpeggios and bitcrushed 808 kicks and handclaps look on from above. He was constantly switching rhythms, forcing them to collide into each other until building them into a crescendo of noise and thumping bass thwacking the crowd awake into a bobbing rhythm. Clark’s latest EP, this year’s Flame Rave, is a hot 24 minutes of bracing electronica and his set followed suit with a near unbreachable wall of noise.

The brilliant thing about Clark’s set is that its constantly evolving in a very organic manner. Just when things are getting a bit too repetitive, he snatches victory from the jaws of defeat and churns out something entirely unexpected and wholly exciting. He services a beat just enough so that its danceable and then immediately changes things up —  all the while providing an overload of massive, block rockin’ beats, and wafting Moog synth lines. Poppier moments are quickly fucked up and rearranged in noisy shapes. He constantly tugs and pulls at his sound, subtly pulling back the noise curtain (eliciting yelps and screams from the crowd) before dropping a tidal wave of a bass over and over again. Being a drummer himself, Clark imbues every individual kick drum with its own bone crushing intensity and energy.

Though it’s thrilling when he causes a highway road collision of beats crashing into and over each other, the best parts are when the synths match the drums in intensity, as if they were fighting for dominance over the audience. “Springtime Linn”, a highlight from his aforementioned EP, features gyrating synths writhing over powerful, tribal rhythms, though they are quickly overtaken by a cacophony of Moog bleeps before totally dropping out into a tropical palate cleanser. However, as soon as you can catch your breath, that all encompassing bass comes back to deliver punishing blow to the senses. Only having a short 50 minutes to work with, Clark ended his set with a white wash of noise before blasting into one more driving, dancefloor filler featuring droning synths and (again) that floor shaking bass.

With a more minimal set up focusing on his sampler, Jason Chung, aka Nosaj Thing, took the stage shortly after Clark’s ear pounding finale. Though Nosaj Thing’s set features the same bone-rattling bass, he deliberately creates a smoother groove and a chiller atmosphere. If Clark’s noisenik tendencies is the sound of the apocalypse, then Nosaj Thing is the calm before the storm — a decidedly different style that brought a different audience to the front of the crowd.

Nosaj Thing weaves subtle psychedelia into R&B-esque grooves while dropping washy synths lines throughout. With a more minimalist approach than Clark, Nosaj Thing takes ethereal vocal samples, faint murmurs that sound like souls trapped in his pads, and creates an otherworldly atmosphere through the gentle sighs of faceless individuals. The bass is never too loud, but somehow still manages to vibrate through your entire body and gently float out of your head. His ever-changing background features various lines and shapes morphing, moving and dancing around the music: squares folding into crosses before expanding into endless waves.

Variety is the key, as Nosaj Thing is able to morph his sounds into unique shape and textures all the while retaining a very strong danceability. His latest single, “Don’t Mind Me”, features soft synths that explode over smooth 808 kicks before dropping into the glitched whispers of Whoarei. All the while the background changes into a starry sky that slowly melts down the screen.

To close his set, Nosaj Thing brought out three familiar voices: a nod to Little Dragon’s Yukimi Nagano with a quick tease of the wavy handclaps and lush synths of his “Klapp Klapp” remix, then a run-through of “Eclipse/Blue” which features Blonde Redhead’s Kazu Makino before finally closing with a tease of “Cold Stares” which features Chance The Rapper. Much like Clark, his set felt far too short, though I assume that has more so to do with venue regulations than personal choice. Let’s get a longer set next time, eh fellas? 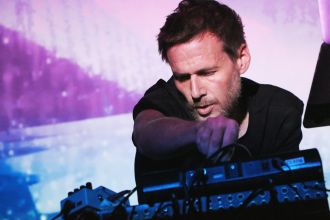 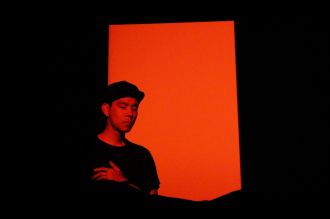 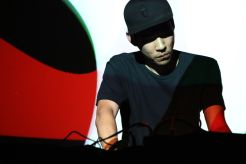 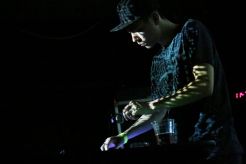 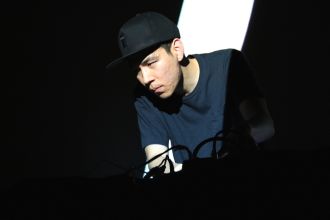