Last night at Thalia Hall, Dan Deacon, along with a stellar bill of supporters, created his own little world. The sold-out show transformed into another universe, a singular bubble where everything was free and colorful and cathartic, and everybody danced.

Chicago’s own legendary ONO kicked things into the highest conceivable gear as the first opening band. The noise/avant garde/industrial/gospel/everything group electrified the audience with palpable and infectious energy. Having only previously seen them in small and strange spaces, I can confirm that they thrive on a larger stage. They belonged there and seemed to know it, using the environment to their advantage to say the things they wanted to say and above all else, do it loud. Though hard to pin down, ONO found a home last night in the Dan Deacon world where everything was free to be exactly what it wanted to be, no questions asked.

Next was Baltimore comedian and filmmaker Ben O’Brien. For his act — part standup, part PowerPoint presentation — we’d know him as Earth Universe, the leader of the satirical cult of the same name. He wore a key on his head (“the key to unlocking your mind is to stop thinking — that’s why I have a key on my head”), danced to Collective Soul’s “Shine”, and told us about how “learning things is boring and appropriation is fun!” He was hilarious and set a whimsical tone with his “beliefs” on energy and religion and the gospel of Dr. Bronner’s Magic Soap. I’m pretty sure we’re all in the Earth Universe cult now, whether we like it or not.

Prince Rama was the last of the openers, and didn’t let the energy falter. With their glam rock looks and new age-y sound, their set was all lights and color and movement. The Brooklyn trio sent us back to the ’80s — that, or straight to the future. Their unyielding enthusiasm to perform was contagious.

At this point, we should have been exhausted: wiped out, ready for bed. But when it came time for Dan Deacon, there was no stopping the crowd. It was like all the openers were merely our training and it was finally time for the big marathon. After a witty yet introspective speech about anxiety and the release of stress, Deacon fell head first into a set that took control of our bodies and emptied our brains. Everything turned to instinct, and everyone danced as if no one else were there. It was as if the entire room lost its mind and the only way to communicate was by thrashing limbs around out of control.

At one point, Deacon lost power mid-song, and the music came to an abrupt halt. But that didn’t slow things down in the least. Being the creative soul that he is, Deacon pulled up a security guard named Darren and made a game out of it as his gear was put back into working order. He had us all turn around, and, sans microphone, invented a song in which Darren would make a noise we all had to imitate. A stream of strange sounds took over Thalia Hall, and we could only listen, not look. Leave it to Dan Deacon to turn a potentially disastrous moment into a beautiful one of collective joy. Later, he even remarked, “That could’ve have been a nightmare if one of you was a dickhead, but no one was! You know what? I’m glad the computer crashed! If not, we would’ve never met Darren!”

For “Learning to Relax”, Deacon split the crowd in two and instructed us to follow the interpretative dances of our respective group leaders. Members of ONO guided the movement, constantly trading places with audience members that had moves to share. We also had the customary dance off in the middle of the crowd, just another moment that transformed the notion of concert into something much more. It was never just about Deacon or his music; it was about how the music acted as a platform for people to connect and share the experience.

During the opener of Deacon’s new album Gliss Riffer, “Feel the Lightning”, the crowd participated in a “Wall of Life,” a new take on the “Wall of Death” often seen at metal shows. For this song, he insisted we run straight into the other half of the crowd, giving a “series of endless high fives” throughout the song. Balloons fell from the ceiling as we grasped hands with strangers, dancing the stress of day-to-day life away, as if nothing mattered but the present.

Deacon took a moment before the last song of the set to speak on social issues. After asking us to raise our arms and hold hands with the person next to us, eyes closed, he had us imagine the last person in the news that had been hurt by figures of authority. He then had us picture the face of someone we love and imagine that those victims had families and lives and people that loved them too.

After this moment, he launched into fan favorite and set closer “The Crystal Cat”. No matter who you were, no matter where you came from or what your life was like, in that instant you were a part of something bigger. It was impossible to not smile wide.

Setlist:
Sheathed Wings
Mind on Fire
Paddling Ghost
Wham City
Snookered
Of the Mountains
Learning to Relax
When I Was Done Dying
Feel the Lightning
USA I: Is a Monster
USA II: The Great American Desert
USA IV: Manifest
The Crystal Cat 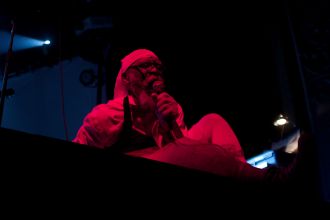 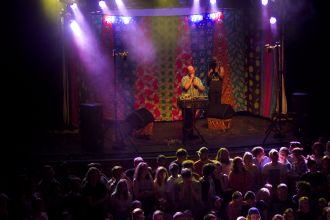 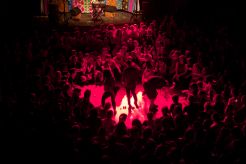 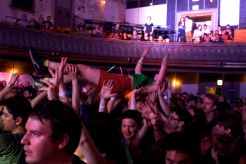 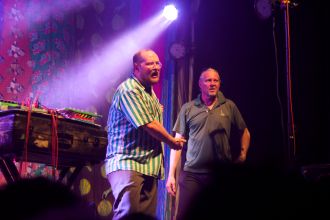