As the crow flies, the distance between the Music Hall of Williamsburg and Mac DeMarco’s home address (which he revealed at the end of his recent mini-album, Another One) is less than 12 miles. You might’ve thought that all his friends and neighbors turned up at the sold-out Brooklyn venue, as the line wrapped well around the block before doors even opened. And it makes sense, given the Pepperoni Playboy’s magnetic charisma and reputation as a folk hero of sorts.

But first, before DeMarco even hit the stage, a few words are necessary to describe Jerry Paper’s opening act, which scored some points based on sheer weirdness. The musician (real name: Lucas Nathan) emerged donning white socks and a kimono revealing wisps of chest hair. His mic was attached to an earpiece, giving him the appearance of a strange motivational speaker. For each song, he would set up his synths, then groove in an interpretive dance, all while crude, computer-generated visuals evoked a nightmarish acid trip in the background.

Jerry Paper then ceded the stage to Mac DeMarco. Despite The Village Voice’s report from his Monday Bowery Ballroom gig (in which the singer was referred to affectionately as “Patient Zero”), the singer seemed in better spirits, while his bandmates jokingly complained about their various ailments. (Right before “Still Together”, DeMarco gargled water and spat it at the audience, some of whom eagerly received the second-hand hydration. Hopefully he didn’t have anything contagious.)

The band managed to play every song from the new mini-album, kicking things off with “The Way You’d Love Her”. “Salad Days” also got the crowd going early, leading to a rousing singalong to the “la-la-la-la-la-la” part that echoed through the packed venue. The band was able to mix things up even when playing older material, like an uptempo version of “Let Her Go”. While their cover of Steely Dan’s “Reelin’ in the Years” wasn’t a new development, it still provided a nice change of pace with its rollicking piano and guitar riff.

As has been well-documented, DeMarco’s dynamic stage presence was a sight to behold, goofy grin and all. He managed to name-drop Molson and Tim Hortons, like any self-respecting Canadian would. At one point, someone in the crowd inflated a condom like a balloon and threw it to the singer. He stared at it for a long time, deadpan, as if deeply offended, before gently tossing it back into the crowd. For the rest of the night, he waddled around the stage bow-legged or gyrated his pelvis to wild cheers.

The most cringeworthy audience behavior, which took advantage of the lax security and DeMarco’s chillness, reared its head toward the end of the set. Increasingly emboldened fans kept hopping on stage, but instead of quickly exiting or leaping back into the crowd, many hung around, trying to take selfies. While DeMarco didn’t say anything, he kept turning away or covering his face. He clearly wasn’t having it.

DeMarco’s solution was simple: Instead of letting the fans get to him, he’d go to the crowd. This was my first time seeing Mac DeMarco live, but I had previously seen photos of his performances so I knew there was some seriously laid-back crowd-surfing on tap for “Still Together”. This prior knowledge didn’t spoil the experience, which still electrified the crowd as Mac reclined, wide smile on his face, as he floated atop his devoted fans.

Setlist:
The Way You’d Love Her
Salad Days
No Other Heart
The Stars Keep on Calling My Name
Another One
Cooking Up Something Good
Ode to Viceroy
Without Me
Reelin’ in the Years (Steely Dan cover)
Just to Put Me Down
Let Her Go
I’ve Been Waiting for Her
A Heart Like Hers
Still Together
Encore:
Chamber of Reflection 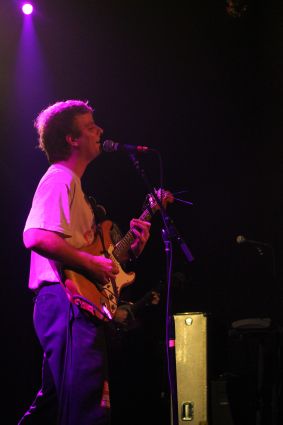 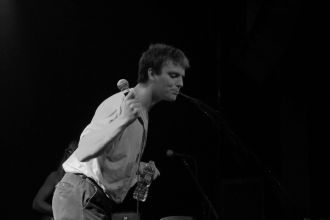 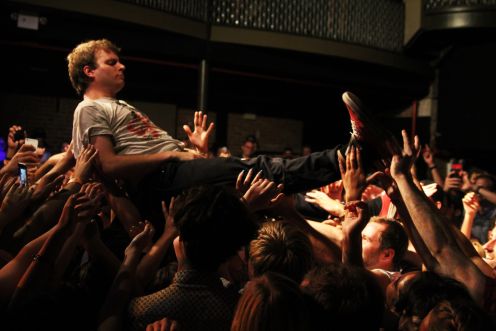