New Jersey gets a bad rap. It’s “the Armpit of America.” It’s notorious for its hard-partying summer denizens, who are in search of the fabled land of GTL. It’s the home of a certain bloviating governor who may or may not be responsible for Bridgegate.

But as someone who grew up there and knows there’s much more to the state than “What exit?” you live by, I was excited that Bleachers’ Jack Antonoff – a fellow native of Bergen County, New Jersey – is trying to shine a light on his local music scene by curating a one-day festival: Shadow of the City.

“So many people spend their time trying to get out of New Jersey,” Antonoff said in an interview with Rolling Stone about creating the festival, “then as soon as they do, they realize that it’s actually the greatest place on Earth.”

The show took place in Asbury Park at the Stone Pony, the historic club where New Jersey rock gods like Bruce Springsteen and Bon Jovi cut their teeth. The name of the festival fittingly refers to the massive shade cast by New York City, one of the premier music destinations in the world.

The lead-up to the festival wasn’t without its hiccups, though. Vic Mensa and Robert DeLong were dropped from the lineup without much notice from festival organizers. (In their places, rising rockers Bully and Chicago singer Sam Dew were included.) Perhaps most notably, though, Charli XCX backed out of the second leg of her co-headlining tour with Bleachers, but stayed on for Shadow of the City.

These issues didn’t negatively impact the festival, which was refreshingly small-scale and laid-back. There was only one stage, and the early group of performers (Sam Dew, How to Dress Well, Bully and Cults) all played ideally timed half-hour sets. Except for delays stemming from Charli XCX’s set, the festival mostly stuck to its schedule of only spending 20 minutes to set up the stage between performances. While the shows occurred outside on the Stone Pony’s Summer Stage, the venue itself was open so fans could cool off from the afternoon heat.

There was a stand staffed by the creators of Weird NJ, a publication that any self-respecting local kid would study when searching for the scariest urban legends. There was a food truck serving New Jersey’s favorite local delicacy, pork rolls. And there was The Ally Coalition’s (an organization that supports LGBTQ equality) dunk tank, which gave fans the chance to unseat Jack Antonoff and his friends and family into a tank of water. (Antonoff could be seen hanging around the dunk tank earlier in the day, egging participants on and shooting the shit with his fans, which was cool to see.) The crowd, which gathered slowly throughout the picturesque September day, was also not too packed, giving good sight lines and making exiting the venue not a nightmare.

From the opening notes of “Go Outside”, Cults had the perfect summer send-off, buoyed by singer Madeline Follin’s soaring voice. But the crowd really came to life during MisterWives’ set. The blaring trumpet and saxophone of “Best I Can Do” heralded the entrance of lead singer Mandy Lee, who burst onto the stage to kick off the performance. The New York natives also did a powerful rendition of The Weeknd’s inescapable hit “Can’t Feel My Face” spliced with Michael Jackson’s “P.Y.T.” before closing with “Reflections” and “Our Own House”.

The Front Bottoms – the only other band able to lay claim to the home turf – followed. Just a few short months ago, the quartet stole the show just down the street at Asbury Park’s Skate & Surf Festival. Playing one of the later slots at Shadow of the City – a day after the New Jersey rockers released their new album, Back on Top, no less – felt like a fitting victory lap. Sure, “HELP” was released as a single leading up to the album dropping, and the band had been performing “The Plan (Fuck, Jobs)” in their live sets previously, but the crowd knew the new-ish material (even “Historic Cemetery”) really well. As usual, though, “Twin Size Mattress” served as the emphatic closer, giving the moshing fans and crazy crowd surfers one more chance to move.

Charli XCX’s penultimate performance got off to an inauspicious start after a 15-minute delay. Her vocals seemed way out of sync, and at times it didn’t even seem like she was singing much on opening track “Sucker”. (This didn’t stop Charli – who always has a good sense of humor when performing – from gyrating right behind an unsuspecting security guard.) After the hot mess of “Sucker”, she started to get her footing on “Breaking Up” and Icona Pop’s “I Love It”. By the time “Famous” rolled around, Charli was on her game, rallying the crowd with her yelling, “Come on. Let’s lose control!” The set then rolled through her other hits like “Doing It” and “London Queen”. She even rapped Iggy Azalea’s verses while covering “Fancy” before closing out with “Boom Clap”.

Finally, it was time for Bleachers’ headlining set, where it became clear this was the Jack Antonoff show. Calling the gig the last true headlining performance in support of 2014’s Strange Desire, Antonoff frantically flew around the stage like a man possessed. Taking cues from ’80s synthpop and heartland rock, Bleachers’ anthemic tracks are undeniably fun to watch live, from the electronic breakdown on opener “Like a River Runs” to the soaring vocals on “Wild Heart”. Antonoff seemed to feed off the dynamic energy of the crowd members, who eagerly flung their arms in the air and sang along.

Since Antonoff had previously cited Bonnaroo as the source of some of his favorite festival memories, I was hopeful for a superjam with the other members of the lineup, but unfortunately that didn’t come to fruition, save for a brief Charli XCX cameo at the end. Antonoff did, however, bring his dad onstage to play guitar for a new song, also named “Shadow of the City”. On “You’re Still a Mystery”, saxophonist Evan Smith came hurtling off his stand for a rollicking solo very much reminiscent of the late Clarence Clemons. During an extended breakdown, Antonoff and Smith traded volleys, leading the fans on their respective sides in a cheer that grew louder and louder.

Then, after calibrating the crowd’s volume down to a lower level, Antonoff requested a cathartic release from the crowd on his cue – “some real apocalyptic type shit. Rip the fucking sky down.” The drums ramped up before the crowd exploded in exuberance one last time before Antonoff ran offstage.

The band quickly returned for an encore, opening with a stunning cover of Kanye West’s “Only One”. With Smith’s mournful saxophone floating in the background, Antonoff’s reserved croon intensified as he pleaded with his modified version of ’Ye’s lyric: “Tell them all about me.”

“Who I Want You to Love” came next, but everybody was waiting for a madcap finish with “I Wanna Get Better”. The positive anthem served as perfect closer for the set, with Antonoff hopping off the stage and singing while upheld by the crowd. When Bleachers closed down the Stone Pony, a slight chill had crept into the ocean breeze. The time to hang out down by the shore was coming to an end this season, but it wouldn’t surprise me if Bleachers returns next year for a new tradition of sending the summer off with a small-scale outdoor concert.

As Antonoff said earlier in the set about how great it was to give one last hurrah to Strange Desire in his home state: “I couldn’t think of a more fitting thing in the world.”

Click ahead for an exclusive gallery from Shadow of the City. 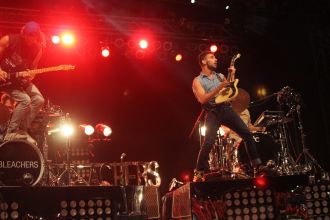 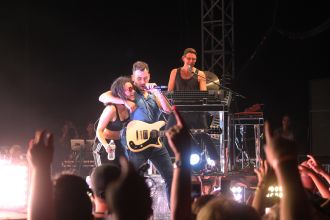 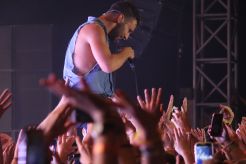 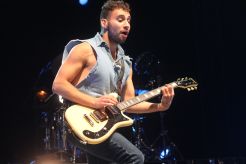 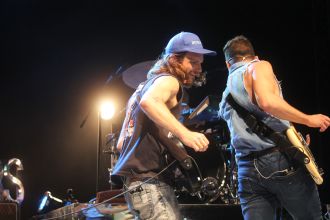 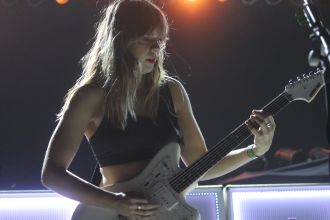 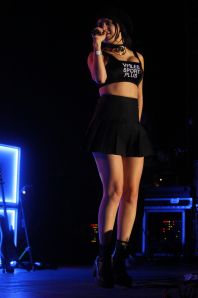 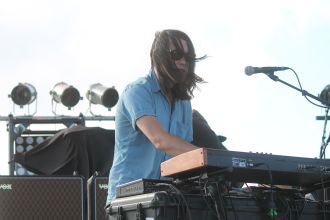 How to Dress Well // Photo by Killian Young

How to Dress Well // Photo by Killian Young 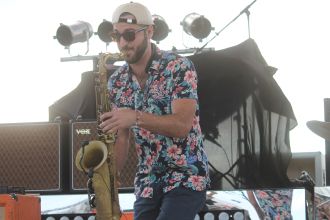 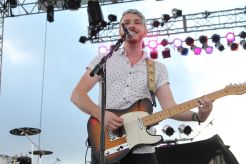 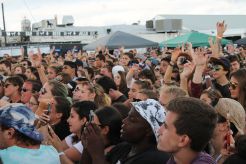 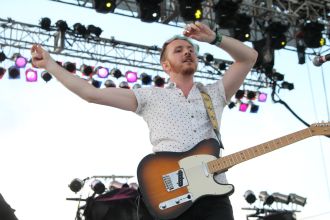 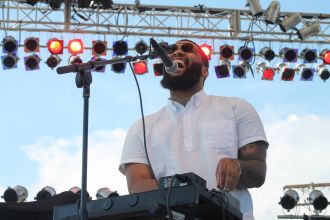 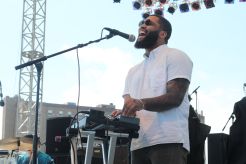 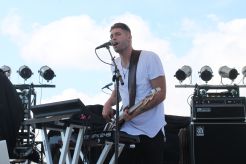 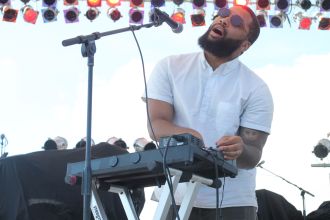 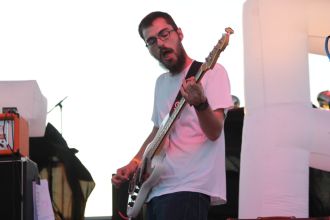 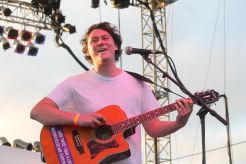 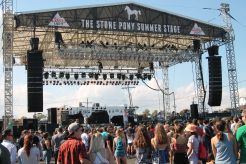 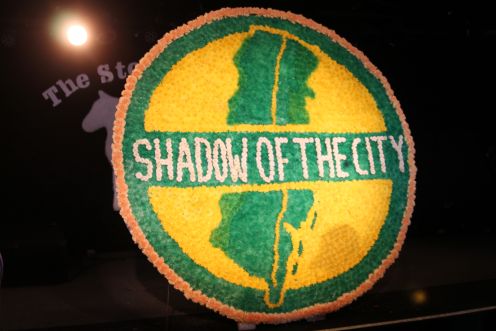