“This feels like such a quiet room, so why should I say anything?” asks the grinning Norwegian musician halfway through her set. Oh, and it’s clear all right that she wants to poke, prod, and scratch you straight out of your skin. She paces around a white exercise ball in the middle of the stage (perhaps the “good” twin to her latest album cover) and continues, “This is like being on a date, and you say these things, then feel panicky thinking about three sentences ago.” It’s typical Hval – the sincere disquiet at revealing her heart hovers mid-air while that heart, which also seizes sexuality, sifts through carnal discovery in order to exploit the parables of life.

As she ramps up the synths that tremble in the background so that rather than a ghost-like gauze it all starts to spill over and ripple around each word, Hval launches into back-to-back tracks, one of them called “Drive”, which according to her is not on her new album. Eventually building to an all-encompassing swelling, shooting around the room and lifting a reprise of the lyrics she screams, “Cry, cry, cry” into a sort of meditation on life’s inevitability wrought with a bleak hopefulness (“I feel my body’s strength”) that feels a little more so with each affirmation.

We hear a lot of cocks and cunts, flaccid dicks, and bananas cradled in laps, but she isn’t exclusively alluding to sex, instead, how to grasp the transient nature of connection. She isn’t here to insult but to isolate herself and create a large enough protective space between the listener. “I arrived in town with an electric toothbrush pressed against my clitoris,” she asserted during 2011’s Viscera, and since then her narratives have been utterly absorbing — a loudspeaker for our mind’s thoughts — crude, real, and raw.

Wearing a beige velvet-matching tracksuit, her mid-length, honey-blonde wig falls limply on her shoulders, and although her music is far less antagonistic than her lyrical compositions might suggest, her movements suggest otherwise. During “Heaven”, the fifth song from her newest release, Apocalypse, girl, each stride morphs her into a hiccuping fem-bot on the verge of rapture. With her back facing the crowd, she laments, “What’s happening here is a lot more fun. Just singing about empty rooms brings me back to the empty dance floors of my childhood. I grew up in a small town, and all the disco’s were really under-crowded.” That intersection of genuine sincerity and anxiety is essential to Hval’s expression, and the remarkable thing about her live performance is that she continues to use it like proxy to reinterpret her power and fuse it back into the present, making it all a means of working through her response to being human.

On a very basic level, Hval is an affront to those finger-wagging that music is just plodding the same boring ground. She isn’t dealing in some didactic self-pretense, rather fighting against apathy, and the means she’s showing stiffens with a live-wire innovation. Once she unbolts from distance, she swims the full scale of it – “I’m wearing my glasses today, time to take them off now and be blinded” — and a cover of Lana Del Rey’s “Summertime Sadness” unfurls somewhere between the terrestrial dream world and more existential meanderings she shapes atop a simple hip-hop beat. “I’ve said it before and I’ll say it again. I’m complex and intellectual,” she asserts during “Why This?”

The performance swerves into hypertension; wig, glasses, and outfit come off, and the images of rebellion in “The Battle Is Over” and the lines “You say I’m free now … Yeah, I say I can consume what I want now” remain viscerally painful, blunt, and especially when rendered in this “now,” Hval’s voice sounds even more extraordinary, vaulting, and almost occultly all consuming than it does on record.

Throughout, she gambles in a world of blatant feeling, pausing to whisper, “What is SOFT DICK ROCK?” from the track “Kingsize”, to prove that this sort of unembarrassed pastiche feels brittle because she allows her voice to crimp around the edges of her own ability, curl around the clangs of percussion, and churn in the heady momentum. Mostly, she wants to crack apart our own captivities – not just as women. The audience shrunk, then grew kingsize as the final sentiment, a 10-minute manic rhythmic overload shared by everyone in the room, made it hard to feel anything but gratitude for being party to her world. The end result of that vacancy and quietness in the beginning being transcended, and as the vocal loops dissolve, it’s hard not to feel mesmerized and inspired. 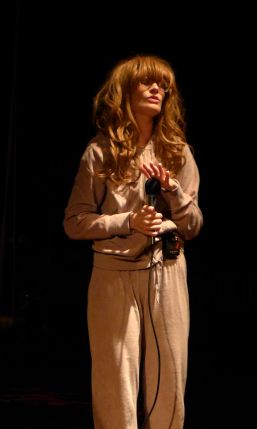