I met DIY concert promoter and American Icon Records owner Jonathon Galyon at a festival in Austin a couple years ago. I was a wide-eyed journalist new to the world of music festivals, and Jonny was still an upstart promoter at the time, booking his first big bill shows and festivals. Our respective paths, though different, intertwined. We’ve been friends ever since, and I’ve followed Galyon’s progress as he’s booked bigger shows, from Fourth of July adventures to unofficial SXSW metal parties that threaten to undo the corporate charade that Southby has become. Jonny’s motto: “Elevate the underground.” It’s the same motto I stand by as a music writer. So, when he announced American Icon’s North West Hesh Fest at Dante’s in Portland — featuring Pentagram, Dead Moon, and YOB — I felt an obligation to travel westward to witness this celebration of heavy rock ‘n’ roll.

My nerves were shot from travel when I arrived at Dante’s. Two blazing torches surrounded the entrance. It was a large, single-room venue with two facing bars, go-go dancer platforms, and a conveniently connected pizza stand. Jonny greeted me but soon disappeared to take care of important promoter shit. It was a Thursday. Pentagram, fresh off the release of Curious Volume, were about to embark on a tour, and in order for them to play Hesh Fest, it had to be on a Thursday. RidingEasy Records’ Sons of Huns and Electric Citizen were the support. You couldn’t find a better heavy bill anywhere else in the world.

For the next three and a half hours, I battled my jet lag with massive fucking riffs. The hometown boys in Sons of Huns brought a Metallica-esque combo of thrash and melody, running through their latest record, While Sleeping Stay Awake. It was a pleasure hearing tight renditions of the songs live after my time spent reviewing the album earlier this year. Guitarist Pete Hughes was extra cheerful — his resting riff-face was a beaming smile — and the set felt loose without coming off as half-assed or lazy (considering the band has played its fair share of PDX shows).

The crowd was close to capacity by the time Electric Citizen went on. Frontwoman Laura Dolan was wearing a skin-tight, black leather one-piece, looking like a cross between Barbarella and Catwoman. After catching them in May at Psycho CA, I knew I’d be in for a lively set of riffing, theatrical heavy psych. Ever the expressive performer, Dolan worked the crowd, strutting about the stage, tossing her hair, and slinging her voice around Ross Dolan’s riffs. It was an overtly sexual performance, though tasteful … classy, even. The band played the majority of their Sateen record and were especially tight on this night.

Finally, it was Pentagram’s turn. The band was in a noticeably good mood, and Bobby Liebling appeared healthy and aware, rocking a pair of youth-sized black tights and a glistening green jacket. The past couple times I’ve seen Pentagram, Liebling was erratic, and it was hard to understand what he said between songs. That was not the case at Hesh Fest. Crowd-pleasing classics like “Forever My Queen”, “20 Buck Spin”, and “Be Forewarned” worked the now-drunk audience into a fervor as Liebling seduced his way about the stage, playing air guitar and wagging his snake-like tongue. I struggled to shoot as the pit tectonically shifted to Greg Turley’s bass riffs. The new album cuts sounded great, even if the crowd wasn’t as familiar with them.

After Pentagram’s last song, all I could think about was sleep. It was a draining first day. I crashed out at the hotel.

The best part of Hesh Fest was the fact that it covered the full hesher spectrum. Each day was vastly different. Whereas the first day was a tight bill of doom, Day 2 was headlined by Portland DIY legends Dead Moon — on Fred Cole’s 67th birthday, no less. It was a more wholesome day, more melodic, softer, and sweeter, touting local power-pop bands and garage acts like DRC3 and The Last Dancers. Hell, a Portland busker opened the day. “Elvis,” as he was billed, karaokied The King’s greatest hits to maximum endearment. Jonny gave the local scene their due cred: Day 2 was pure PDX.

Local hardcore punks P.R.O.B.L.E.M.S. were a highlight of the festival, delivering the fastest and most aggressive set of the weekend. Frontman Bradly Battin screamed like it was his sole purpose in life. Kellin Halliburton’s bass lines were rapid blasts of aggression. Their sheer speed lit a fire under our asses and woke us up. It was a turning point in the night. Upon discovering that Tecate tallboys (garnished with lime) were a mere $3.50, I began to drink to the pace of the songs. Considering these guys played one-minute songs at blazing speeds, I ended up three beers deep by the end of their set. My slight drunkenness would prove surprisingly limbering as I sidled through a rowdy crowd in search of cool shots for the rest of the night. The lack of a photo pit meant that I’d be in the fray for Dead Moon.

I remember Jonny telling me that he had to pick up a birthday cake for Fred Cole earlier. Sure enough, the set began with a round of “Happy Birthday” and Fred blowing out the candles as Toody looked on, pumping her fists and smiling a giddy smile. Then they played the hits, opening with “Fire in the Western World” and running through the fan favorites. People responded — maybe a little too much. Two fights broke out in the pit. One girl tackled another girl, then some dude got pissed that another dude kept bumping into him and lashed out. Considering the warmth of the situation, it was baffling how anyone could harbor such negative energy.

Aside from those distractions, the set was remarkable; it felt like a milestone performance. I’ve never been to a place that admires a hometown act like Portland admires Dead Moon. All weekend I heard their music in shops and saw their iconic logo on the shirts of many civilians. The reverence between band and audience permeated Dante’s. I was completely taken. I will never forget shouting the chorus to “Dead Moon Night”, arm and arm with the random guy next to me.

The third and final day of Hesh Fest was the heaviest, headlined by YOB and Acid King, but it began with a welcome surprise as a group of teenagers took the stage. The Portland School of Rock — a rock academy just like in the movie — performed Judas Priest’s Sad Wings of Destiny in its entirety. Between each song, the kids would trade instruments or sub out so another student could get a crack at guitar, vocals, drums, etc. Major props to the school, its teachers, and Jonny for giving them a slot on the bill. They sounded awesome. I can only imagine the joy those kids must’ve been feeling, shredding Priest on a stage like Dante’s. Too bad the bar’s no-minors policy meant they couldn’t stay for the rest of the show.

Overall, Dante’s served as a great spot for a single-venue festival. Centralized downtown, one could come and go between sets, hitting up Stumptown Roasters for a cold brew coffee to caffeinate, or walking around the corner to get a Voodoo Doughnut (there was a line around the block every time I walked past that place). I never feel cooped up inside the venue. To step outside and stand on the corner of Burnside and 3rd offered both fresh air (the Washington wildfire smoke cleared up by Saturday) and an unparalleled people-watching experience. The full spectrum of Portland’s population seemed to concentrate here.

After the School of Rock’s killer set, Diesto and Sweat Lodge kept it heavy, the former with methodical sludge and the latter with their feel-good stoner rock. It was a major show and an important bill for the Sweat Lodge boys, who’d traveled all the way from Austin in support of their excellent debut album, Talismana. Frontman Cody Lee Johnston made good on the situation, winning the crowd over with his charismatic presence and soulful vocals, going full-on Ozzy during “Slow Burn” and “Phoenix Ascent”. It’s cool to see a band actively winning over fans via performance. I Overheard a lot of “Whoa, what band is this?” from the people around me.

Finally, Hesh Fest drew to an introspective close. Veteran’s of the stoner doom scene, Acid King cast a blanket of droning feedback. I didn’t want to take pictures. I wanted to close my eyes and just stand there. The bass shook me. I recognized tracks from their new album, Middle of Nowhere, Center of Everywhere, and choice cuts like “Drive Fast, Take Chances” from past albums, but the set flowed more as a singular whole, riffs begetting riffs. Guitarist/singer Lori S. took the prize for the best power stance of the festival — she appeared godlike before a wall of Hovercraft amps.

The mood was set for YOB. The Oregonian lords of astral doom were in their element, on their home turf. The next hour felt like a journey through space and mind. Like with Dead Moon the night before, the wall between band and audience diminished. We all shared the moment. Mike Scheidt thrust his fists skyward in utter bliss, enraptured. The band’s minimalistic songs came to life in the live setting. It was one of the heaviest things I’ve ever witnessed. A full body experience. “Marrow”, a track I have held dear to myself over the past months, a track that speaks to me on an existential level, became too much to bear. I welled up; shivers ran up my spine. I was overcome by the intensity of the situation. To be in this wonderous place, watching this incredible band at my friend’s festival was affirming and inspiring.

The path was cleared to ascend. The underground was elevated. 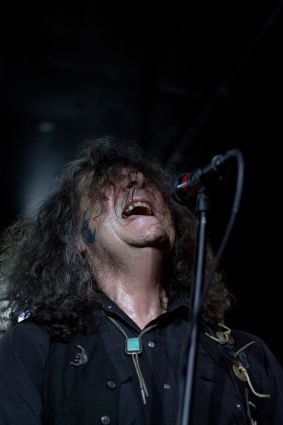 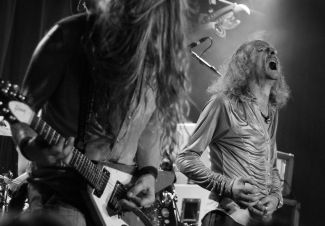 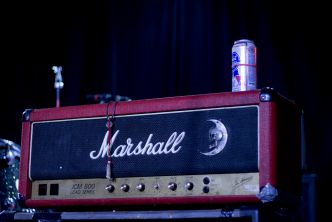 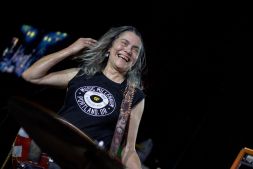 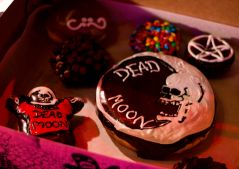 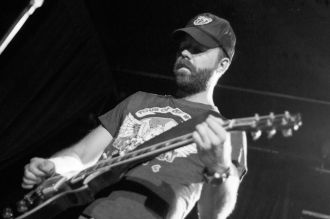 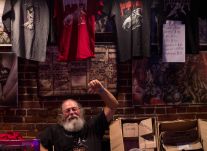 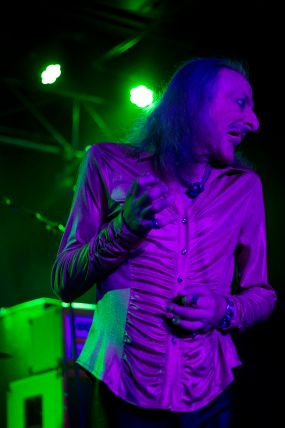 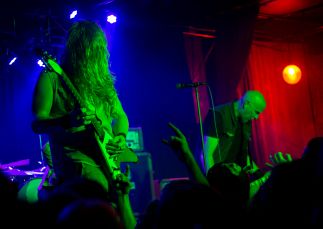 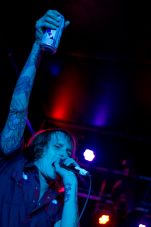 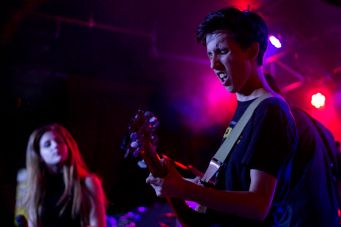 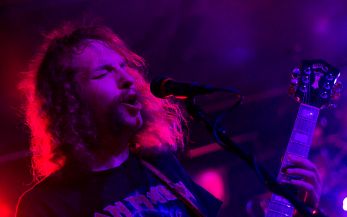 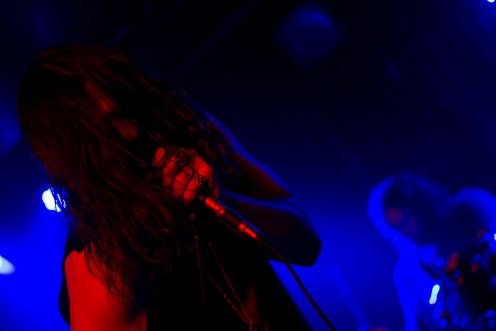