A proposed new rule for Halloween: No wearing police/SWAT team costumes to music festivals. The idea isn’t that clever, and there are already enough uniformed agents at these large music events to warrant some level of unease from even the most innocent of revelers. And when challenged to arrive as your “Freakiest” self, is the icon of civil obedience really the best you have to offer?

Chicago’s newly expanded Freaky Deaky certainly owns the dark whimsy of the holiday. Having outgrown former venues like Congress Theater and the Aragon Ballroom, the REACT production has found a new home in the shadows of Toyota Park — situated on the Southwest side of Chicagoland. The expanded footprint leads toward a more immersive all-day experience, complete with carnival rides and fried fare (a la Chicago’s Riot Fest) and detailed stage backdrops highlighting both the lighthearted (Big Top stage) and more sinister (The Crypt) elements of Halloween.

Just as the square footage has expanded, so has the repertoire of talent. At its core a dance massive, Freaky Deaky never pigeonholed itself into one genre, featuring the likes of Chromeo, A-Trak, Nervo, Big Gigantic, Griz, and Dada Life since first launched over a half-decade ago. Similar to sister festival North Coast, Freaky Deaky has now been amplified with a healthy dose of hip-hop. With dedicated hip-hop festivals about dried up, this three-day showcase is challenging for best bill in the Midwest community. Not only did 2Chainz follow up FlyLo to close out The Big Top Friday night, but the likes of Logic, Joey Bada$$, Vic Mensa, Mac Miller, and Goldlink all brought their signature flow for the beat-crazed crowds.

With temps expectedly mild Friday and Saturday, constant motion was a near necessity to keep warm. Anticipating the region’s manic late-October weather patterns, the production team was wise enough to position all three stages beneath tents. These also kept attendees relatively dry (accept for all that sweat) during the weekend’s intermittent rainstorms. The larger two tents were ample enough to contain all but the largest crowds that flooded towards the front; however, as the underground beats of tech-house, g-funk, and techno gain new popularity across Chicago, the Crypt regularly overflowed with colorful shufflers.

Anecdotally, Freaky Deaky has transformed into an experience targeted towards the region’s suburban youth. A lengthy public transit commute, a car is all but a necessity to effectively reach Brideview, and upon departure, few cars followed in our pursuits back towards downtown. As parking within the city becomes increasingly stressful and expensive, it does seem fair for the Southwest suburban folks to have a festival of their own.

A rebirth of sorts, one can envision Freaky Deaky eventually evolving to occupy the interior of Toyota Park. The stadium already hosts the intermittent concert, and should a Skrillex-type character ever make it onto the bill, attendance and pre-sales are certain to increase. For those that can remember back to 2010, deadmau5 was playing the Soldier Field green before Spring Awakening ever expanded into the stadium itself. Even as their parent company, SFX, hits tough times, REACT and their tight-knit network of partners have cultivated a devoted base that will prevail post-EDM bubble burst. The following 10 acts attest to the expansiveness of REACT’s curatorial abilities within the amorphous framework of a dance-centric event.

Beloved for sharing his journey through life in genuine and humble fashion, Mr. Carmack did not disappoint his hoards of adoring fans spilling out of The Crypt. His blending of dance-inducing beats and hip-hop samples had Freaky Deaky goers bouncing on their mummified feet. His set began with an energetic, near-frenzied dance pulse that soon gave way to a chilled-out, melodic. purple-hazed groove. However, Carmack showed he wanted a more hype audience, as flip after masterful flip, he brought the masses back from the living dead with trap-style drops and funk classics. Carmack’s inclusion of Drake’s “Back to Back” and what could be dubbed the unofficial theme song of the weekend, Rick James’ classic “Superfreak”, into the end of his set was a genius move. Mr. Carmack has once again proven his ability to not only draw crowds, but also keep them moving.  Hopefully next year we’ll see him at a stage big enough to accommodate his growing fanbase. –Taylor Mock

A prolific future house producer and energetic shuffler, Oliver Heldens is now truly shaping into a talented DJ. Whereas mixing errors and minor technical blunders fouled his Spring Awakening set roughly five months back, attentions never had a chance to waver from his behind-the-booth charisma Sunday evening. With the day cut an hour short due to the end of Dayligtht Saving’s time, Helden’s uplifting anthems were the final stimulant to keep attendees soaring through the final day’s headliners (Pretty Lights, Richie Hawtin, and the recently shamed Carnage). With his remix of The Prodigy’s “No Good” and Becky Hill-collab “Gecko” quickly becoming ubiquitous on the 2015 festival mainstage, it’s only a matter of months until Heldens himself is regularly headlining these Stateside massives. –Derek Staples

Emancipator has become a festival staple over the years due to Doug Appling’s magically smooth transitions and addicting melodies. Emancipator stands out of the melée of producers as one of the few to bring a live ensemble to Freaky Deaky. The violin, played by Ilya Goldberg, adds a perfect haunting quality to the smooth tones and perfectly bounceable beats floating throughout the tent. Emancipator’s unparalleled ability to gently rouse festival-goers from the haze of languid daytime sets to more buzzing, restless night sets makes him the ideal act for a sunset show. Even though all good things must come to an end, it’s always a sorrowful event when I can’t hear just one more track from Emancipator. –Taylor Mock

Dressed as the renegade protector of Gotham City, A-Trak proved yet again that he is the hero we all deserve. Watching A-Trak spin is a wonder to behold. His speed and control over the decks is like watching poetry in motion. With a set that vacillated between pop hits and aggressive, stabbing house tracks blended perfectly with unmatchable scratching, A-Trak created a party where everyone can get down. Although his production history and mixtapes all focus heavily on hip-hop and rap, this set featured more big-room house tracks, offering up just a small taste of “Trizzy Turnt Up” and left me wanting a bigger bite. The fact remains, though, that no matter what he decides to spin, A-Trak always performs with the kind of skill and imagination that few possess. –Taylor Mock

If you happened to wander into a tech- or g-house monthly any time over the last year, chances are you have gotten low to Shiba San’s “Okay”. Winning best Underground Dance Track at this year’s IMDAs, the single received ample support from both the dirtybird and Sleazy Deep imprints, shooting Shiba San to the top of the exploding underground sound. Still happy to splice the cut into the rear of his set, it’s now the augmented basslines of “Swimming Pools” (Kendrick Lamar) and “Low Frequency” (Denney) that have become Shiba San staples for driving the masses mad. Arriving to club land through hip-hop roots, Shiba San has an innate wisdom in controlling crowds with these robust low-end exploits. And no matter how nasty they might become, the dude never loses that onstage smirk. –Derek Staples

NY-born Joey Bada$$ had a whirlwind weekend, and while Chicagoland didn’t get the change to see him with New Orleans’ Soul Rebels (that honor belonged to Voodoo Festival), the midday Halloween set was more than enough to make a “Hardknock” existence at least momentarily positively exhilarating. Equipped with a dense knowledge of hip-hop history, it’s often difficult to peg Joey Bada$$ as a twenty-year-old — that is until you hear the Pro Era mastermind rapping about Vageta (“Christ Conscious Lyrics”). Those lyrics might come from the mind of a digital-native, yet the flow is often floating atop the warmth of analog instrumentals. It has been years since I heard a producer, DJ, or emcee shout out the legendary J. Dilla, but Joey was sure to drop that knowledge when jumping out of “Two Lips”. After seeing this set, one can only shake their head when old heads don’t recognize the skills coming out of this new generation. –Derek Staples

It could be the tailored blazer or his constantly stoic look, but France’s Gesaffelstein always appears to be the epitome of composed. That sense of calm manifests in the often-turbulent darkwave of his signature techno vibes — one just trusts Gesaffelstein to steer through the madness. That grip was loosened during his DJ set to close out The Crypt Halloween evening. Although the set would commence with his solo effort “Pursuit”, the performance transformed atop a more jarring beat-driven selection than associated with his live sets. A studio-collaborator with Kanye West, Gesaffelstein pushed that side of his psyche (ex: “Hellifornia”) for this receptive south side crowd. –Derek Staples

Ever since her noisy splash into the house scene a few short years ago, Hannah Wants has garnered attention as an adept deck-master. Her performance at Freaky Deaky shows a prime example of why that attention is well-deserved.  From start to finish, Wants’ set was a shuffle dancer’s dream come true, as she packed it full of back-to-back jack-your-body house jams. Near the end of her set, she went “In for the Kill” and had the entire audience singing the introduction to La Roux’s cult classic in a cathartic release before dropping a final dance break onto an eagerly awaiting crowd. I know I’ll be anxiously awaiting my next opportunity to catch a Hannah Wants set! –Taylor Mock

Bringing hip-hop into the EDM landscape wasn’t an easy feat for all the emcees that arrived to Freaky Deaky over the weekend. Whereas, most DJs offer a seamless 60-minute sonic exploration, rappers by and large prefer to spend about as much time talking between songs as they actually do performing them. Those constant breaks can be a drag when coming down from an A-Trak performance. Backed by a duo of costumed live musicians, Chicago’s Vic Mensa excelled amidst this Venn diagram of beatscapes.

With the entire city on his side, Mensa could have literally walked through the crowd just dousing faces with Patron because the audience had zero issues hitting the verses of “No Chill”, “Down on My Luck”, “Holy Holy”, and “You Mad”. Keeping the set fresh, Mensa did deliver a new track, likely entitled “Vertical”, for the raucous hometown crowd who were happy to comply with the orders. Not the first of the day to do so, Mensa and co. offered a rendition of Nirvana’s “Smells Like Teen Spirit”. In doing so, the 22-year-old spoke on the impact of Kurt Cobain and Nirvana’s nearly universal message. A message of disenchantment still pulsing strong through the lifeblood of Chicago’s under-served youth. –Derek Staples

FlyLo started the weekend off right with signature body-melting bass and psychedelic beats that I’ve come to eagerly anticipate. He cozied up to the audience by showing a Chicago favorite some love. Chance the Rapper’s vocals added the perfect cadence to a hair-raising, freaky sideshow soundtrack. Flying Lotus’ complete command over the crowd was best demonstrated when well-timed paper strings floated over the audience, transforming us all into his creepily-clad puppets, then moving us in sync to rapid-fire drums that soon melted into a smooth, sexy bassline, all with a knowing grin on his face. After every FlyLo set, I always feel as though I’ve traveled through the trippy dreamscapes that comprise his limitless musical imagination. Doubtless others were feeling it, too, as I witnessed dinosaurs, tigers, and other starry-eyed creatures trickling from The Big Top as though they were waking from a lucid dream. –Taylor Mock 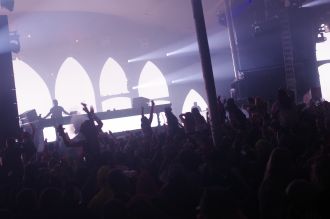 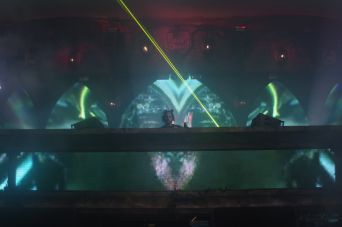 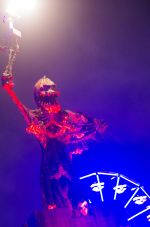 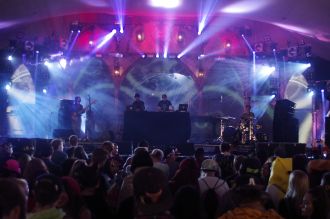 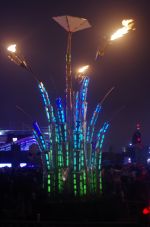 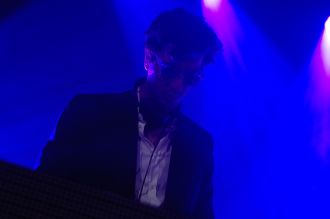 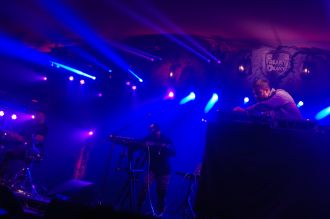 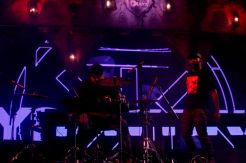 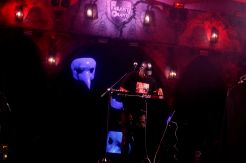 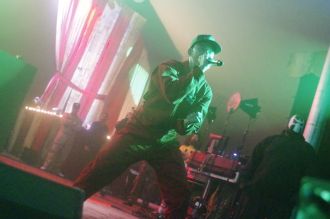 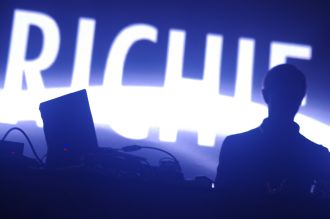 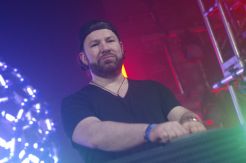 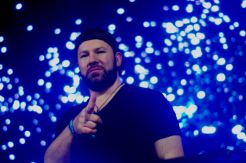 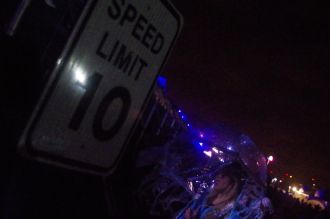 Will Clarke // Photo by Derek Staples

Will Clarke // Photo by Derek Staples