There was something a little strange about the JR JR gig: They had a packed house, and the opener had an empty one. I don’t mean that people showed up late; I mean that there were fewer than 100 people in the room until around nine p.m., and then suddenly the room was full 15 minutes before the Detroit indie pop duo took the stage with an additional drummer and bassist. (It should be noted that opener Brothertiger was pretty good.)

JR JR, formerly known as Dale Earnhardt Jr Jr, talked about the first song they ever wrote (which is apparently “Morning Thought”) and how it used to play in cabs throughout New York City. (Several times, they’d compliment New York, saying it was always their best show outside of Detroit.) The highlight of the banter was probably when Joshua Epstein mentioned another friend named Josh was here for the show, and it was his birthday – and he felt old. In celebration of oldness, they covered “Ooh la la” by The Faces, JR JR-izing the whole thing so it felt like a slick dance party with a breakbeat or two instead of, you know, a tame happy birthday song sung to a friend.

The lights weren’t tame, either. A lot of bands — especially hip-shaking pop bands– seem to tack their visuals on, something to remind you when to bob your head and when to strut. While it by no means matched up to the epic programmed light work of Ratatat, JR JR had a few tricks up their sleeve: glowing signs displaying the band name, colors beyond your standard blues and reds, bubbles shooting into the crowd, rhythmically programmed bursts. Webster Hall became a club.

Perhaps the best moments came when they were just being musicians. Every few songs, they’d expand on the studio arrangements to jam out a bit, and with them able to switch instruments and keep time as steadily as a machine, those were the pulses you could get lost in. If they had weak songs, the jam session would have been the redeeming moment; for JR JR, it was just another piece of the party, and a damn good one at that. 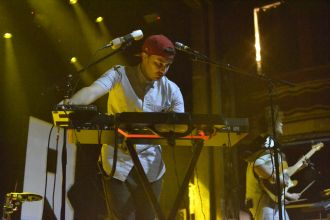