All photography by Joshua Mellin

In 2009, I saw Bruce Springsteen & The E Street Band play Born to Run in its entirety, and it was every bit as bombastic as you’d expect. Then again, it’s a somewhat easy feat for them since Born to Run is a bombastic album, filled with so much hope and unrestrained poetry that its heart threatens to explode.

The River is the exact opposite. Sure, there are happier moments in bar-band goofs like “Sherry Darling”, “Ramrod”, and “I’m a Rocker”, but their scope is smaller, their working-class characters coming from a realer, less idealistic place. When Springsteen sends these people on a carefree (yet still aimless) drive or allows them to go on a rant filled with innuendo and macho bragging, it’s a mere distraction from the financial hardship, loss of identity, and crippling questions that dog them in their everyday lives. In other words, The River is an emotionally exhausting album, even with its much needed respites. And seeing it played in full is an emotionally exhausting live experience.

To set the dueling forces of blue-collar struggle and blue-collar leisure in motion, the band opened last night’s show at the United Center with River outtake “Meet Me in the City”. Officially released for the first time on last year’s The Ties That Bind box set, the song — like many of the upbeat cuts from the River sessions — is deceptive in its pace. Yes, it’s about a down-on-his-luck schlub taking one last fly-or-die shot at romance. Yes, it thunders along with Max Weinberg’s floor toms. Yes, it has a beacon of a sax solo from the late Clarence Clemons, now taken over by his nephew Jake. But the song’s protagonist has also been through Hell, having been in and out of jail and gotten the shit kicked out of him several times. Even if his girl does decide to take him back, it’s only a temporary solution for the more permanent problem of barrel-bottom existence.

The Boss (and by a larger extension, the band) seemed to be aware of this duality as soon as they launched into the first proper River track, “The Ties That Bind”. As if respecting the more downplayed tone of the LP (at least when compared to something like Born to Run), Weinberg kept the pace a little slower than it is on record, a restraint that stayed steady until an appropriate speed-jolt on “Out in the Street”, arguably the most optimistic of The River’s 20 songs.

On the flip side, there were also slight alterations that took the audience to the deeper, darker depths of the record. “I Wanna Marry You” felt a little sadder when, over a seaside carnival sway reminiscent of “Under the Boardwalk”, Springsteen described the lyrics as being somewhat naive. “I dreamed of a love without consequences”, he told the audience. “That’s why it’s a song about youth.” Even when crowd-surfing during “Hungry Heart”, he crossed his arms and looked towards the United Center’s cavernous rafters, mimicking the stagecoach funerals seen in the Western films that have influenced his music so heavily. “How we doing?” he asked the crowd. “I can’t see a thing!”

That’s not to say the entire River portion of the set was some kind of dirge. This was still a Springsteen arena show, after all, and many of The E Street Band’s party-rock traditions still came out to play, from the audience takeover of “Hungry Heart”‘s first verse to Springsteen and Steven Van Zandt’s “It Takes Two” riff at the end of “Two Hearts”. But the crowd also knew when to cease chattering and “Bruuuce”-ing, especially during The River’s back half, which, even in a behemoth venue like the United Center, still feels anchored by a trifecta of defeated, auto-themed ballads — while “Stolen Car”, “Drive All Night”, and closer “Wreck on the Highway” are easily the best songs on the album, they’re not exactly sing-alongs.

So after Springsteen hoisted the pummeled audience out of The River — after he left us all with the image of a man lying awake next to his girlfriend, haunted by the car-crash victim who doesn’t get to go home to his own girl — he and the band spent the rest of the night doubling down on energy and rejuvenation. The younger Clemons — as imposing and good-natured as his uncle was in his prime — bounded from platform to platform during his solo on “Night”, before Nils Lofgren got gleefully sloppy in his solo for “Cover Me”.

There were only two moments where the remainder of the set departed from its emphasis on rousing anthems. First was on “Human Touch”, where Springsteen and his wife, Patti Scialfa, sang their harmonies so close and intensely into the same mic that it looked they were going to make out (they didn’t). Later on, Springsteen kicked off the encore with an acoustic version of The Eagles’ “Take It Easy”. Where Glenn Frey often sang his tumbleweed chugger with humor, Springsteen kept a straight face as Soozie Tyrell joined him on fiddle, as if the title of the song was being addressed directly to his fellow musician, wherever he is now.

After the tribute, the house lights came up in full for an even more amplified version of the traditional E Street encore. For “Dancing in the Dark”, Springsteen brought up an elderly woman to dance with him, and if any fan in the house thought “Rosalita (Come Out Tonight)” couldn’t possibly get any more fun and silly, The Boss, Van Zandt, and Clemons ended the “whoooaaa” crescendo with a Three Stooges gag. As the epic performance of The River proved, E Street still knows how to play to the dark night in all of our souls, but they’ll always send us home feeling a little brighter. 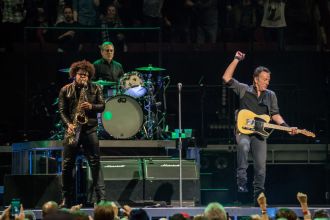 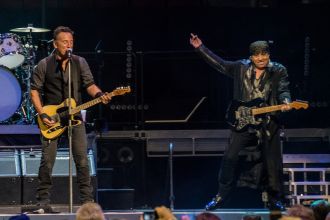 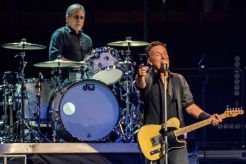 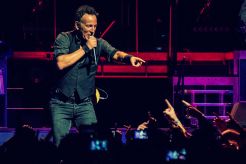 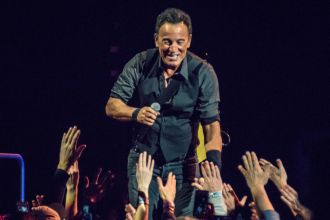 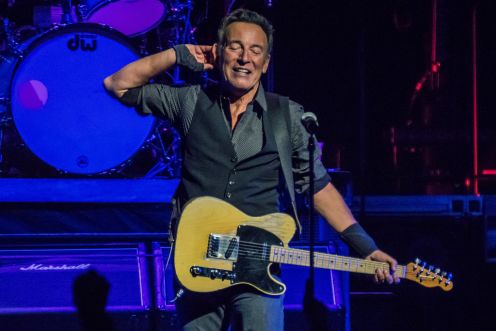